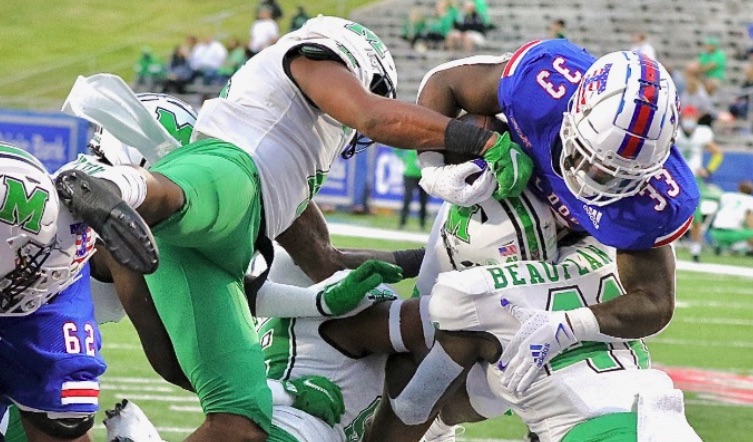 RUSTON, La. – The marquee matchup in Conference USA football turned out to be quite one-sided, in Marshall’s favor.

Redshirt freshman quarterback Grant Wells threw for 227 yards and two scores, Brendon Knox ran for 125 yards and two touchdowns and the defense had another big night as the Thundering Herd rolled to a 35-17 win over Louisiana Tech at Joe Ailett Stadium. The Bulldogs had their home winning streak end at eight.

Marshall rolled up 402 total yards with balance again. The Bulldogs had 267 overall with just seven rushing on 24 attempts with six quarterback sacks. Israel Tucker was the home team’s top rusher with 20 yards.

The difference in the game was on third down as Marshall converted 13-of-16 while controlling the clock for over 35 minutes while the Bulldogs managed to convert just 1-of-10.

“They have a really good football team,” Bulldogs coach Skip Holtz said. “I was proud of the way the defense competed, but we’ve got to clean up the mistakes. But, if you look at this game, our woes are on offense.”

Knox was a workhorse for the Thundering Herd as he carried 32 times. He also added one catch for 13 yards. The 32 carries were the most by an opposing running back against La Tech, since Anthony Wales (Western Kentucky) carried 36 times against the Bulldogs in the 2016 Conference USA championship game.

Wells completed 19-of-24 attempts and added 27 yards rushing with a TD run. He had completions to eight different receivers.

In a game that was decided by three scores, it was the final sequence of the first half that changed the momentum of the night. With Marshall leading 14-3, Tech drove the ball 78 yards on 12 plays over the final 1:57.

Facing a second and goal on the one-yard line with just six seconds remaining and no timeouts, the Bulldogs opted to run a smash play for Justin Henderson. The Herd defense – which tallied nine tackles for loss – stuffed the play as the final seconds ticked off the clock and Marshall took an 11-point advantage and the momentum into the locker room.

A Knox 7-yard TD run midway through the third quarter upped the Marshall advantage to 21-3 before Luke Anthony hooked up with Adrian Hardy for a 12-yard TD to cut the deficit to 21-10. Hardy had nine catches for 102 yards and a score.

Marshall went on to score two more times before Louisiana Tech wrapped up the scoring with a 9-yard TD pass from Aaron Allen to Isaiah Graham with 36 seconds left.

The Herd now leads the series against the Bulldogs 3-1.

Linebacker Tavante Beckett, the C-USA Defensive Player of the Week last week, led Marshall in tackles with 11. He had half a sack and 1.5 tackles for loss.

Marshall leads C-USA East at 2-0, 4-0 overall. Louisiana Tech falls to 3-2, 2-1 in the C-USA West. UAB is now the West leader at 2-0 after beating Western Kentucky at home Saturday.

Marshall is home next Saturday against Florida Atlantic for homecoming.