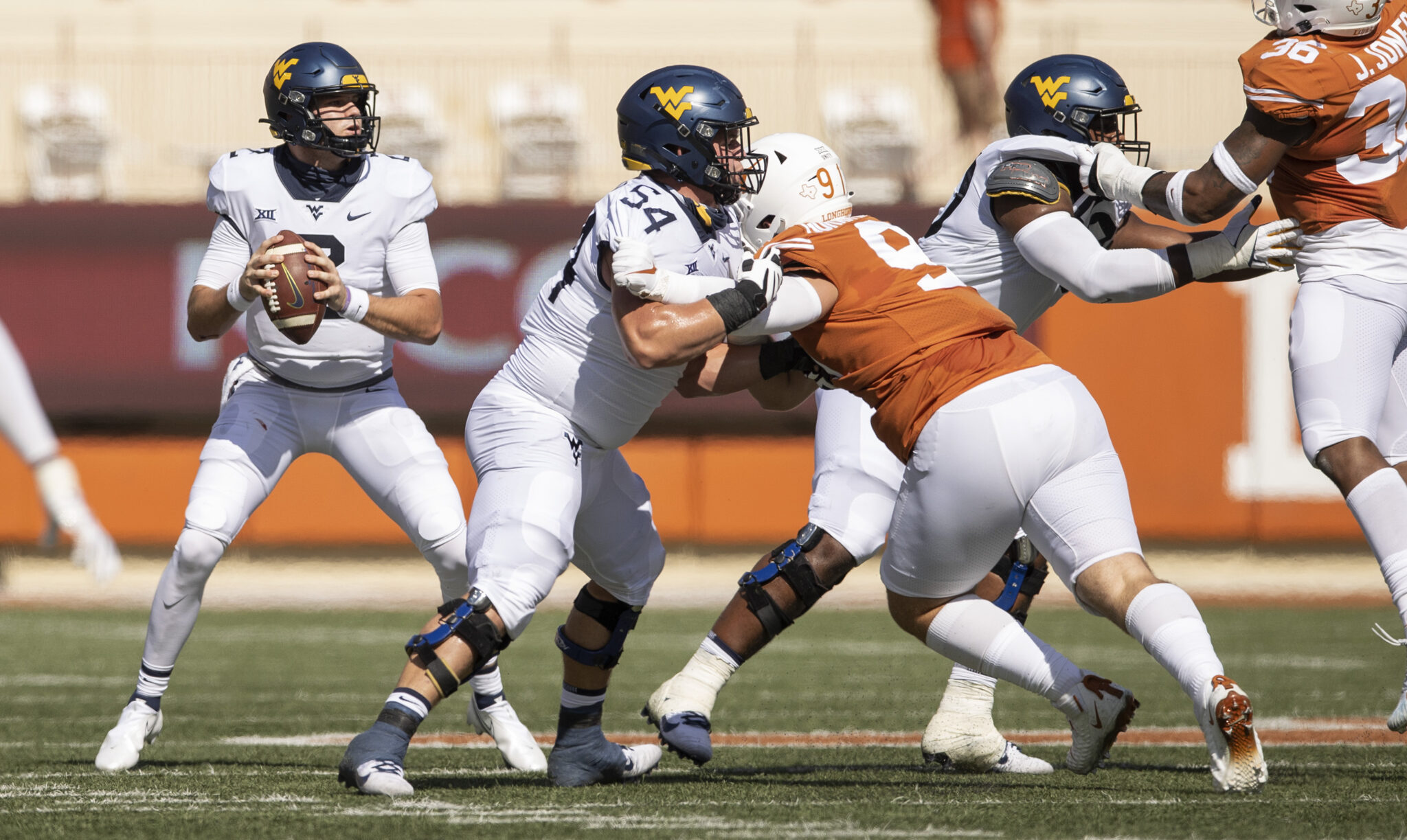 MORGANTOWN, W.Va. — Despite only finding the end zone on their opening possession of the game, West Virginia had an opportunity to leave Austin with a win that could have kept the Mountaineers very much in contention for a spot in the Big 12 Championship game. WVU however could not come up with a big play when needed on their two fourth quarter drives, falling to Texas 17-13 on Saturday afternoon.

West Virginia racked up 223 of their 360 yards in the second half, but mustered only a pair of third quarter field goals from Casey Legg for their efforts. Head coach Neal Brown said he did not regret the decision to go for it on the pair of failed fourth-and-1 attempts in the fourth quarter. On the first of those two possessions, an incompletion on third down preceded the failed conversion from the 16-yard-line.

“We had a third-and-2 there and we called a run,” Brown said. “Most of our runs have some kind of pass option attached to them. Doege didn’t have a choice but the throw the ball on the third-and-2 because the snap was high so he missed the exchange and kind of just threw it to not have a negative play.

“The fourth-and-1 at the end of the game, that was a run-pass (option) again. I will have to look at it. It was bang-bang. I thought we may have had enough for the run but you never know.”

For the game, West Virginia went 3-for-5 in the red zone, but just 1-of-5 scoring touchdowns. The Mountaineers ran 15 plays inside the Texas 20-yard-line, gaining just 27 yards.

“It is a little bit of a double edged sword. Because we weren’t in a position to get negative plays. If we got in third-and-long, it was going to be a tough time for us today just because the matchups weren’t favorable for us.”

Texas gained 167 yards in the first quarter but just 196 yards the rest of the way.

“They did execute a bit in the first half running the ball, really in the first quarter,” said WVU senior linebacker Tony Fields who led the Mountaineers with a dozen tackles. “As soon as we were able to talk it out and find out what we needed to do, like with me boxing the pullers in and having our safeties fall and flow in, we were able to stop it.”

In defeat, Isaiah Esdale led the Mountaineer wideouts with 6 grabs for 60 yards. The redshirt junior entered the game with just one catch on the season.

“He has had two great weeks of practice,” Brown said. “He has the best hands in that unit. And he makes contested catches. I was glad because he was a guy that made some big plays down the stretch for us last year. He really hasn’t moped around or complained, he just kind of went to work. We harp on it all the time that if you do the work, you will eventually have success. He had success today and it was good to see.”

“One word I could say about Isaiah is ‘resilient’. No matter what happens, no matter what goes on, he is always ready to play,” said WVU receiver T.J. Simmons. “He is always ready for his name to be called. He is still the same guy that he has always been. Today we needed him to step in and make plays and when his number was called, he made those plays.”