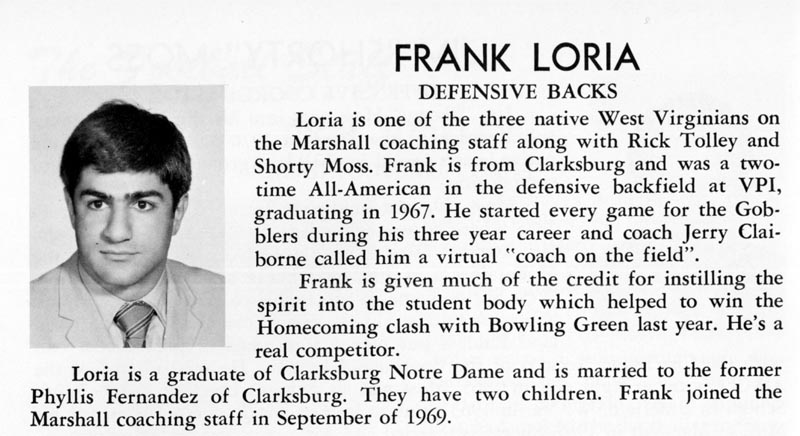 CLARKSBURG, W.Va. — Saturday marks the 50th anniversary of the tragic Marshall University plane crash that claimed the lives of 75 people including members of the football team, coaches, staff, and community members.

Frank Loria, a Clarksburg native and defensive backs coach on that team, was one of the victims. Loria and the rest of the Thundering Herd will be remembered in Clarksburg Thursday, in one of many memorial services taking place around the state this week.

“You don’t have to be a big sports fan or know X’s and O’s to know this is the worst sports tragedy ever to happen on November 14, the Marshall plane crash,” Pete Secret with the Clarksburg History Museum told MetroNews.

Loria, 23, was survived by his two young daughters and his pregnant wife at the time. His son was born nearly one month following the crash. Secret said all of Loria’s family will be in attendance for Thursday’s ceremony.

The tribute begins at 6 p.m. and will be a limited in-person crowd due to COVID-19 but it will be streamed on the Clarksburg History Museum Facebook page.

Loria joined the Marshall coaching staff in September 1969 following a successful athletic career. He finished as a two-time All-State football player at Clarksburg Notre Dame High School and a two-time All-American defensive back at Virginia Tech, graduating in 1967.

While at Virginia Tech, Loria became best friends with Frank Beamer, the legendary Virginia Tech head coach from 1987-2015. Secret detailed the relationship between the two and said that is archived at the museum.

“They were roommates and the best of friends,” he said. “Frank Beamer spent a lot of time in Clarksburg as a young adult. We’ve got some great pictures of them.

“Frank Beamer made the great statement a few years ago of ‘If Franky wasn’t killed in the plane crash, he would have been the head coach at Virginia Teach and I would have been his assistant.”

The current Marshall Thundering Herd football team, undefeated and national ranked at No. 16, will remember the 75 victims of the 1970 crash on Saturday in a game against Middle Tennessee State in Huntington.

The plane was coming back from East Carolina University and crashed near the Huntington Tri-State Airport.