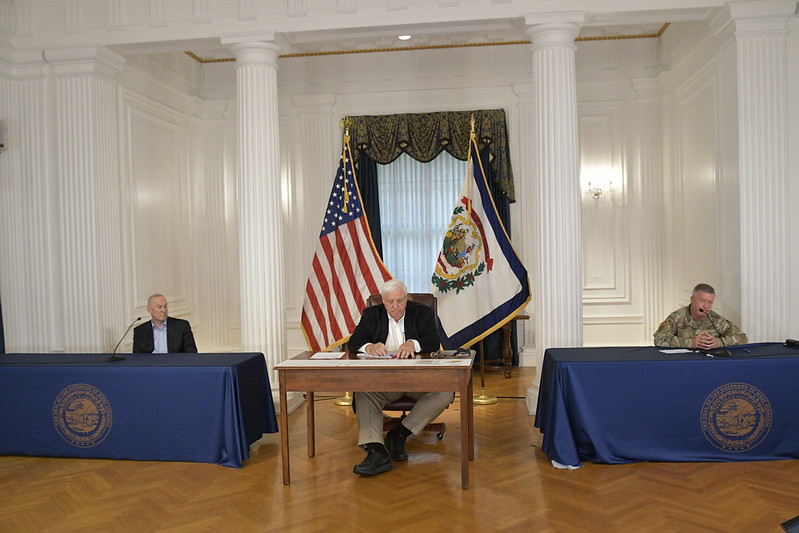 But at the same time, Justice expressed frustration and described limits to his own power.

Justice said that although he declared a mask mandate, his executive powers don’t give him the ability to unilaterally institute penalties on individuals who don’t comply.

Repeating that he can’t order people to be arrested, Justice said again, “I don’t know what else I can do.”

Yet the governor also said the buck stops with him. He described an upcoming meeting with top advisers like Clay Marsh, the coronavirus response coordinator, and Adjutant Gen. James Hoyer of the West Virginia National Guard.

The state reported an all-time high of daily cases Wednesday with 885. “This is a record beyond belief,” Justice said.

That’s in part due to increased testing around the state, but that’s not the whole story.

The cumulative positivity rate keeps going up to, now at 3.11 and well above the 3.0 that state officials months ago had described as the red alert mark.

West Virginia deaths are now at 553.

“This thing is getting worse and worse,” Justice said.

When Justice is asked about further steps during his regular briefings, he often talks in terms of either doing nothing or shutting everything down.

“If you can tell me something else other than just going out and wholesale shutting things down, shutting down our businesses that will cause us more and more and more repercussions — and it may very well be that we have to move in that direction,” he said.

“It may very well be that we have to revisit and think about just this, from the standpoint of our kids: When we go home for the Thanksgiving holiday should we come back for the next two or three weeks and then go home for Christmas?”

The governor also describes willingness to consider additional steps but describes them as a last resort.

“Everything’s on the table,” Justice said today. “I don’t mean to give you the same pat answer all the time.”

In response to a question about some high school teams not being able to participate in the state volleyball tournament because of virus levels in their counties, the governor expressed sorrow for the young athletes but said health measures have to come first.

“Jim Justice has to protect us from dying. From dying,” he said.

“I’ll make the tough decisions because I’ll do the right things for our state.”

That includes lowering capacity for indoor dining at restaurants and strongly discouraging gatherings of more than 25 people.

“We have now crossed over into the danger zone. Too many residents and businesses have ‘COVID fatigue,’ and they are letting their guard down,” Hogan said.

Justice has maintained seating capacity limits at West Virginia restaurants and bars, although he hasn’t issued many recent reminders. West Virginia also still has a limit on social gatherings of more than 25 people, rarely discussed any more.

And Justice put in place a mask mandate for people who go out in public, although there is no penalty for the individuals. On Wednesday, the governor said he hopes businesses are enforcing the mandate and noted they could be at risk of losing their business licenses if not.

Only 62 percent of West Virginians are regularly wearing masks, according to modeling by the Institute for Health Metrics and Evaluation, a widely-cited research arm of the University of Washington.

Justice today repeated his requests for people to wear masks, to get tested and to protect the vulnerable.

He acknowledged fatigue is setting in but likened the pandemic to a battle against an invader.