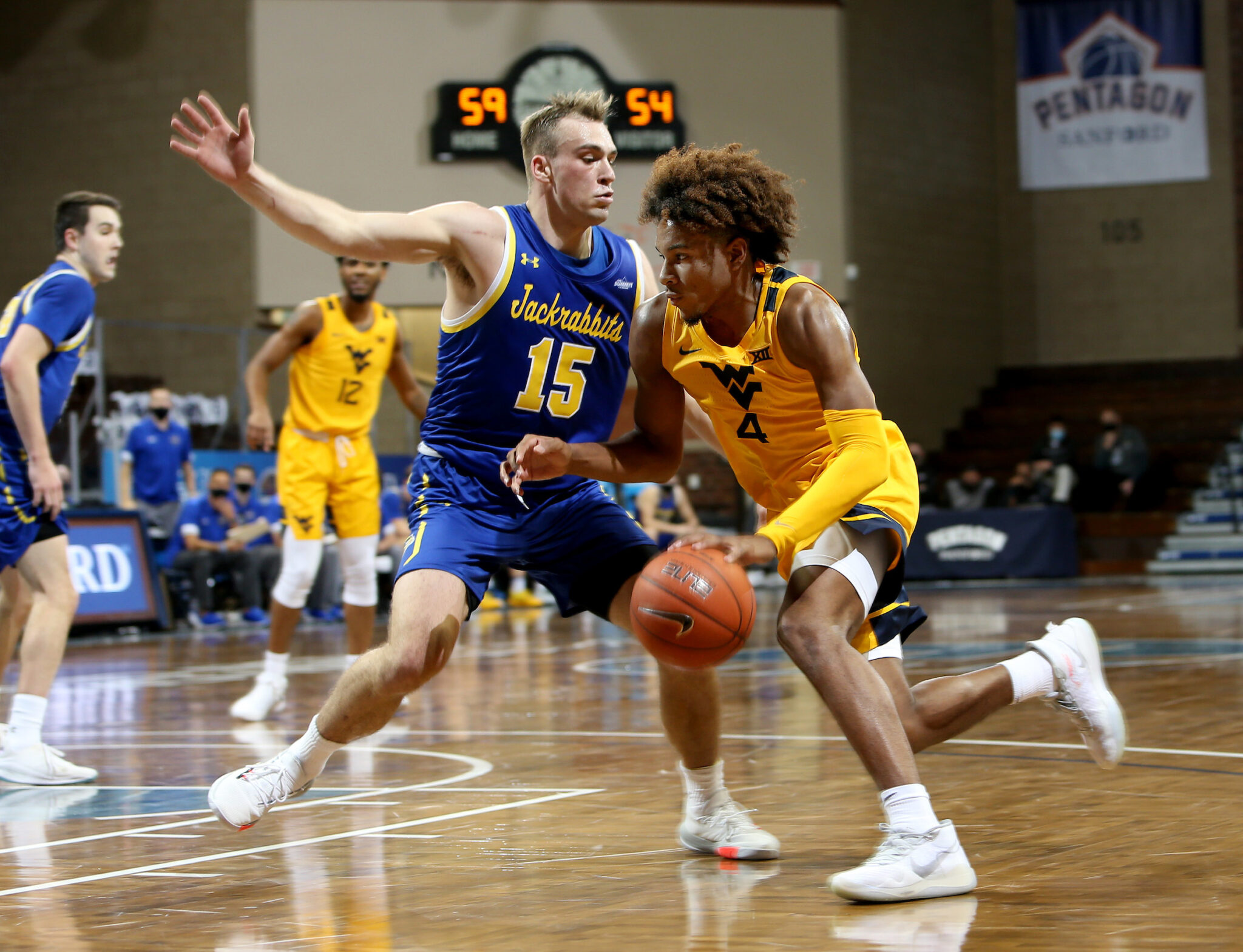 The Mountaineers opened up a 12-point lead with 15 minutes to play but the Jackrabbits crept within 4 at the final media timeout.

“They are a lot better than what I think our guys thought they were,” said WVU head coach Bob Huggins. “We really didn’t get a whole lot of scout. I think we just had one of their games. When I watched their game, I was like, ‘Wow, these guys are good’.”

Sean McNeil added 16 points in his first start as a Mountaineer.

“He shot the ball really well this whole preseason,” Huggins said. “When you score as much as he and Taz do, you aren’t a very good coach if you tell them to go guard the best guy all the time, because you have to have them on the floor. (Sean) has come a long way defensively. He didn’t shoot it as well today as he has been shooting it.”

Taz Sherman chipped in with 14 as West Virginia’s backcourt accounted for 53 of the team’s points. McBride connected on 9-of-19 shots from the floor.

“Honestly, just get the ball to my teammates and let the game come to me,” McBride said. “The first thing when you step on the floor is to compete and to win. That’s really the only things going through my head.”

“We couldn’t keep Derek on the floor,” Huggins said. “That hurts us. I think he is one of the premier rebounders in the country.”

“When you take out Oscar, you have to rely on different things,” McBride said. “They were packing it in so well and just played really solid on defense. A lot of the shots I think we can make. It just didn’t go in today. I think we will obviously look at the film and see other ways we can get our offense moving better and have a little more flow to it.”

“We just have to capitalize more off of passing the ball and moving the ball around to get to scoring than letting the ball stick to our hands,” Sherman said.

The Mountaineers will face VCU Thursday at 2:30 p.m. in the second semifinal.

West Virginia will play two more games in South Dakota. They have replaced next Wednesday’s scheduled home opener against Youngstown State with a game in the Jimmy V Classic in Indianapolis against preseason No. 1 Gonzaga.

“We were sitting in the room last night and it came across the ticker that Tennessee couldn’t play because of COVID-19,” Huggins said. “So I thought, what the heck, let’s call ESPN. So I called some guys that I have known for a long, long time and said, ‘Hey man, can you work this out and get us in the Jimmy V and play Gonzaga?’ He said, ‘let me call you back in ten or fifteen minutes’. He called me back and he said, ‘We got it done, you are in’. It happened pretty quick.”