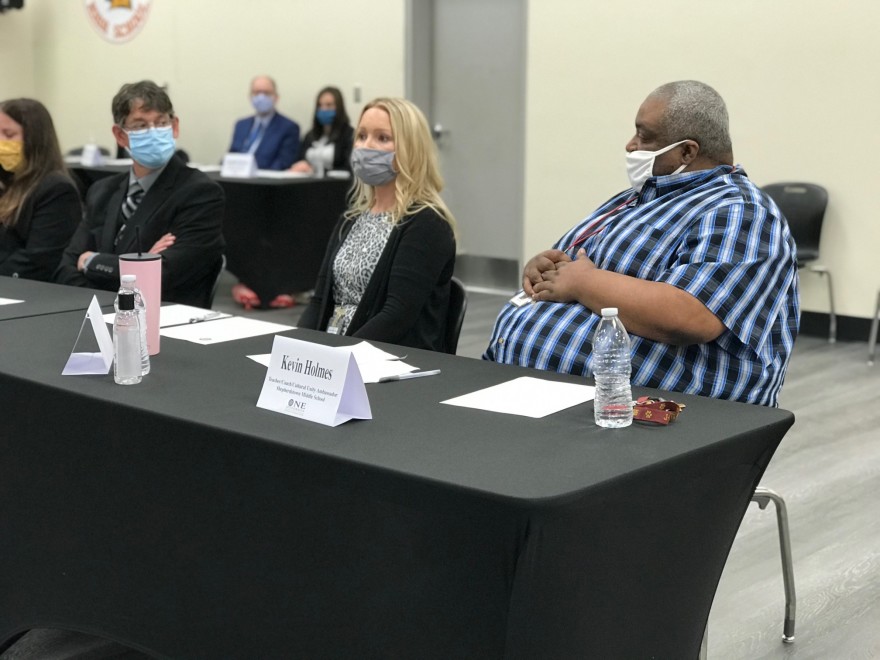 Shepherdstown Middle School teacher and coach Kevin Holmes said health problems led to his doctor advising him not to return to in-person work during the pandemic, but he has felt safe after seeing the efforts to keep schools in Jefferson County clean. Photo by Liz McCormick/West Virginia Public Broadcasting

Kevin Holmes, a 58-year-old business teacher at Shepherdstown Middle School, is grateful for the time he’s been able to spend in class with colleagues and students this year.

“I’m blessed,” Holmes said a couple of weeks before Thanksgiving. “I really feel that way.”

Given the risks of the coronavirus pandemic, odds were against Holmes standing in front of a class this year. His health issues include high blood pressure, diabetes, sleep apnea and asthma, plus carrying a few extra pounds.

When Holmes was among the Jefferson County school system employees to discuss the challenges of the pandemic with U.S. Education Secretary Betsy DeVos earlier this year, he described a warning from his doctor.

“I’m probably at the top of list as the health risk in Jefferson County Schools,” Holmes told DeVos.

Holmes repeated the warning during the interview for this story.

“He just said if I caught it, I’d have a hard time surviving it.”

Holmes is a good example of the kind of uncertainty that school systems and individual educators have gone through during the pandemic. Schools ramped up with personal protective equipment, cleaning regimens, new rules about social distancing and an often-awkward balance of classroom and distance learning.

“I can say all my staff are overjoyed to have the opportunity to be with students in whatever format they can and with all the students on site that they possibly can get under their wing,” said Shepherdstown Middle School Principal Rebecca Horn.

“They are willing to do things that I would never have imagined adults would be willing to do at such a fast and hurried pace, inasmuch as learning the technology and making accommodations to be on site or virtual or reach the children by phone, house visits, whatever it takes to get the job done to reach our children and provide both the educational and personal touches that school provides.”

The weekly Department of Education map depicts nine counties as red, the highest level of virus and halting classroom instruction. Another 13 counties were orange, which also sends students home. And some counties, like Upshur, have made their own decisions to forego classroom instruction as virus cases strain the supply of substitutes.

The Department of Education lists 24 current West Virginia school outbreaks, defined as two or more confirmed covid-19 cases in a 14-day period in a single classroom or core unit.

The situation has gotten so challenging that the West Virginia Education Association has called for a shift to remote learning through the end of 2020.

“Our school systems are seeing massive closures and quarantines due to exposure and contact tracing. Many systems have not opened for weeks and others are alternating between in-person and remote learning depending on map colors,” stated WVEA President Dale Lee.

State schools Superintendent Clayton Burch has described remote learning as a Band-Aid, for emergency use only and far less than ideal because it’s such a challenge to remain in touch with many West Virginia students from afar.

The governor has agreed that increased spread of the virus in communities has made it challenging to keep schools open. But Justice and state health experts have contended that the precautions in schools have made them safer than other public places.

Jefferson County, where Holmes has been a teacher for many years, has joined many other West Virginia counties with recent challenges.

Holmes met in the principal’s office to speak for this story on Nov. 12, which was a Thursday. The next Saturday, Jefferson County went orange on the map, shifting to remote learning for the following week. This week, Jefferson County remained orange.

Justice had earlier announced school should remain out a full week after Thanksgiving as a precaution because of holiday gatherings.

So Jefferson County’s classroom closure has just kept getting extended, along with many other school systems in the state. Doors won’t open until December, if then.

That uncertainty has been on the horizon for a long time. But Holmes said it’s not clear how everyone will adjust.

“I think the teachers are prepared; we’ve helped each other. The virtual kids will be fine with it,” he said. “I’m not sure about the face-to-face students, how it will affect them. They’re used to being with each other. You see more friendships and barriers being broken down than you probably would have if this covid hadn’t been around. They’re embracing each other. They’re helping each other.”

Holmes hadn’t thought he would be in school at all this year. He had already sent his official notification to the human resources department this summer when he had a change of heart. He gained confidence after taking note of the school’s unprecedented efforts to prepare.

“I saw the hand sanitizer and the floor looked brand new,” he said. “Social distancing was important for me.”

Besides, he said, “I really needed the socialization. It was affecting me emotionally to stay home.”

Moreover, “the kids needed me.”

Holmes is in his 11th year at Shepherdstown Middle after spending six years at Jefferson High School. His business class responsibilities mean leading students through creating and running simulated businesses while also coaching a new robotics competition team after school. He is also football coach and girls basketball coach for the middle school.

This year, he’s had to multi-task more than ever — teaching some students right in front of him while also directing attention online to some students who are logging in from home. It’s been a big adjustment. Holmes admitted that a time or two he’s forgotten to log in for the virtual classes, rallying once reminded.

When DeVos visited a few weeks ago, Holmes gave her an honest and somewhat frustrated assessment that the virtual learning wasn’t working out very well. But with time and increased parental involvement, he now believes virtual learning has improved.

Holmes said he can tell some of the students who log on for virtual learning are eager for human contact because some log in for classes that aren’t even on their schedules. Others reach out during his office hours because “they just want to talk.”

“They just want you to say ‘good morning,’ tell them to have a good day and they’re fine,” Holmes said. “It’s more than reading, writing and arithmetic here at school.”

Holmes said he has not regrets about his time in the classroom this year.