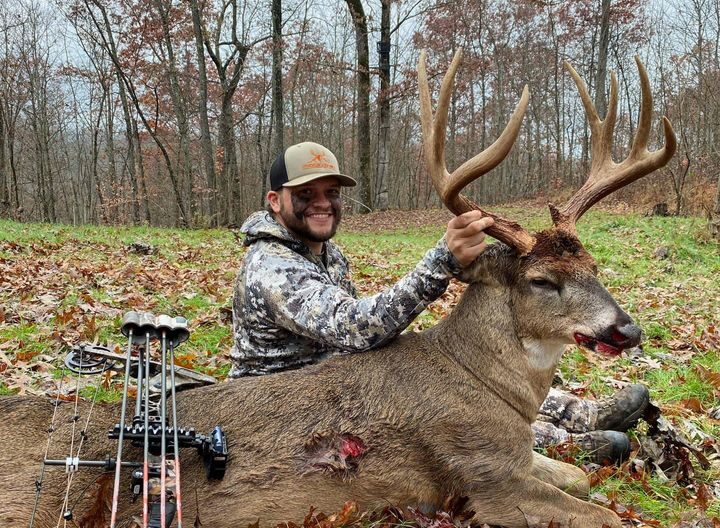 Cody Delong of Iaeger, W.Va. with a buck he finally killed after a four year pursuit

IAEGER, W.Va. — Mother Nature can throw you some curve balls. Nobody knows that better than Cody Delong of Iaeger, West Virginia. Cody, a pharmacy student at Marshall University, is an accomplished hunter. Over the years, he’s killed some nice McDowell County bucks. However, there is one which has always found a way to elude him. That is until 2020.

“I’ve had about four years of history with this buck. I got a picture of him four years ago and he was a symmetrical eight point buck,” Delong said in a recent interview on West Virginia Outdoors.

Listen to “Cody Delong on W.Va. Outdoors” on Spreaker.


Over the course of the next four years, the buck wasn’t camera shy, but Delong said laying eyes on him was a completely different story.

“I’ve got thousands of pictures of this deer, honestly thousands. I’ve hunted him in multiple different places. I’ve tried to figure out where he is during the rut, during the early season, during the late season. The only predictable thing about this buck was in the late season. He was always showing up frequently, but about the only place you could count on seeing him under the sun was December,” Delong explained.

The unpredictable nature of the buck was frustrating. The fact he only showed up at Christmas earned him the nickname “Rudolph.” However, in 2020, he had another wrinkle to add to his mystique and to whet Delong’s appetite to pursue him. His eight point rack for 2020 was true freak of nature.

“He has double-split G-2’s. He’s an eight point buck, but one side has three and one side has five. The three point side would be a typical six point frame but he has no brow tine. The other side is a typical eight-point frame, but he has the split G-2 which gives him five on that side,” Delong said trying his best to describe the buck unusual array of antlers.

During the past several years, Delong had given up early on finding the buck since he had others in the area and would typically tag out with a shot at another deer without ever giving “Rudolph” too much of a chance. However the odd nature of the 2020 rack made Delong more determined than ever.

“This year I set out to kill him specifically. I passed on eight different bucks this year, including one really nice 20-inch eight pointer. I just knew this deer was unique and he was getting up there in age and he was probably going to go downhill next year,” he said.

But when the first week of November arrived, Delong was still unable to nail down the buck’s pattern. He caught one picture of the buck in an area he’s hunted previously, but hadn’t planned to hunt this year. Those plans changed and he moved into position on a foggy Friday morning.

Delong said the fog started lifting about 10 o’clock and he knew the bucks would soon be moving. He had two small bucks near his stand immediately. As he watched those two, movement caught his eye a further distance away.

“I looked over my shoulder and it was a deer coming down the road and then all of the sudden it was like somebody opened a curtain and I saw his rack appear out of the fog and I just said, ‘OH MAN!'” laughed Delong.

“He turned his head and the sun hit that big split G-2 and it was like seeing a unicorn. You hunt a deer for that long and never see him you wonder if he really exists,” he said.

The buck quietly walked straight toward Delong’s stand without hesitation. He strolled up an offered a quartering away shot at 18 yards and suddenly, the four year pursuit came to an end.

“He came right in on a string like you were calling a turkey. He never knew I was in the world,” he said.

A fitting way to put it since until that moment, Delong wasn’t sure this buck he had seen on camera for the past four years was really in the world either.