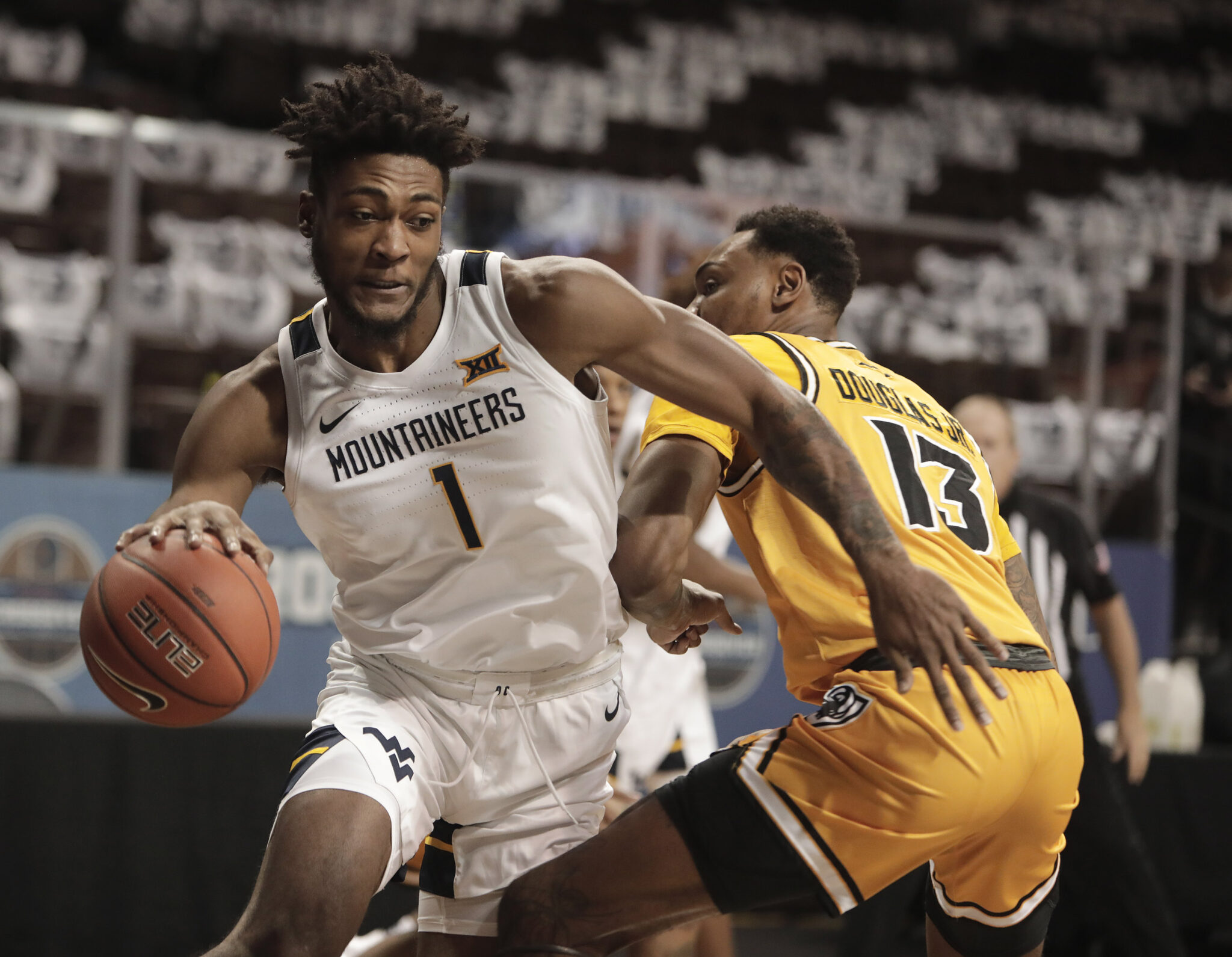 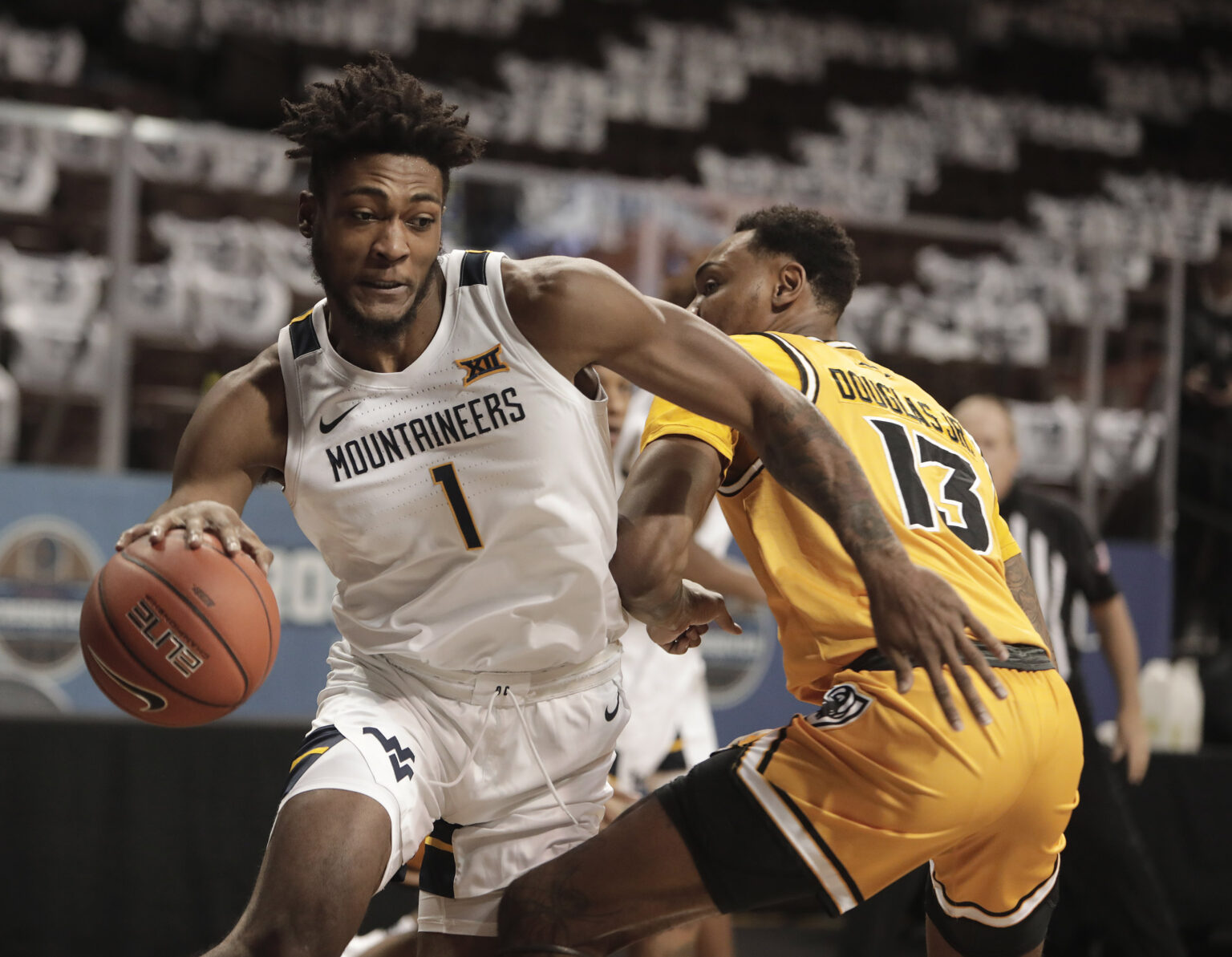 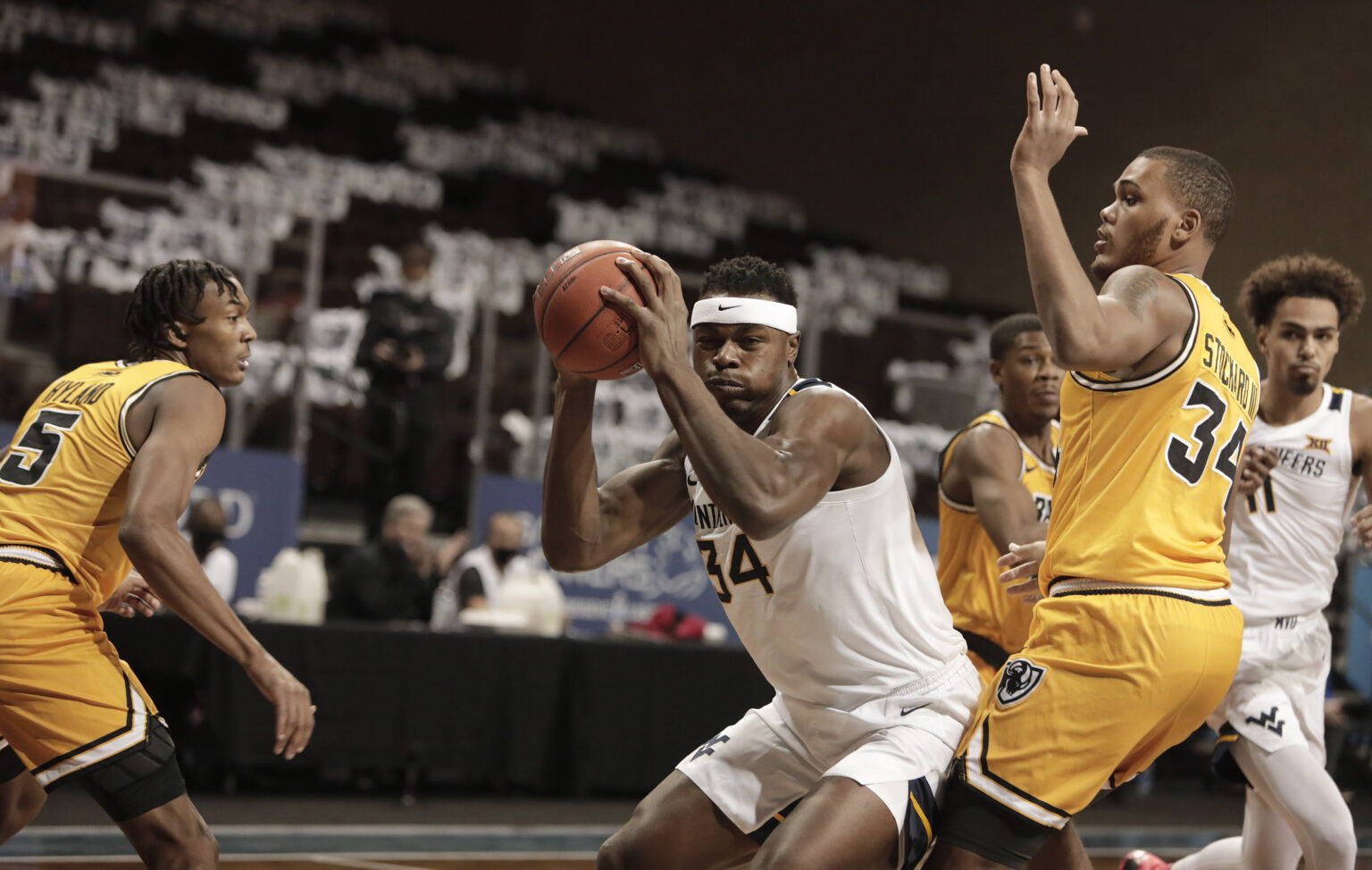 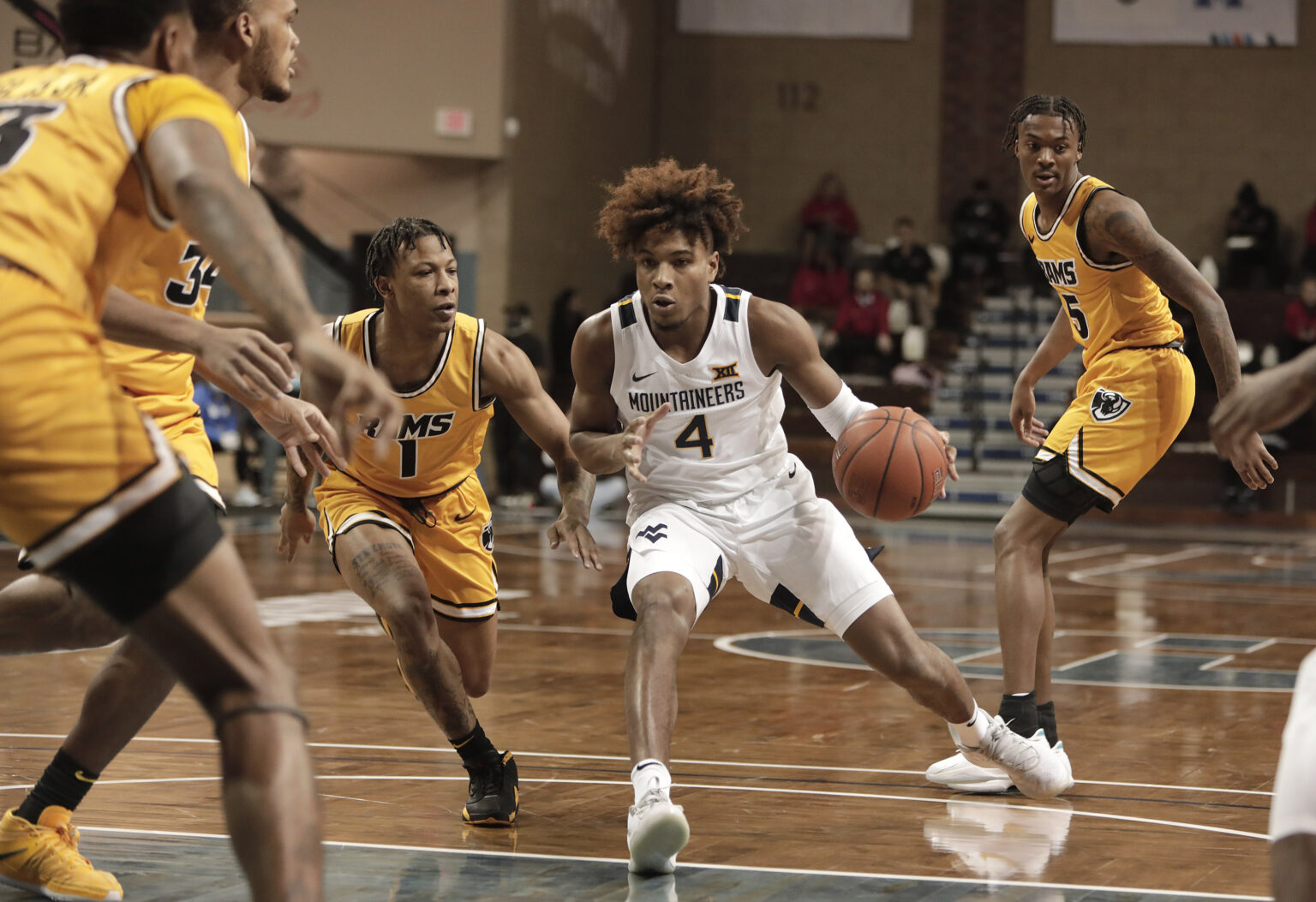 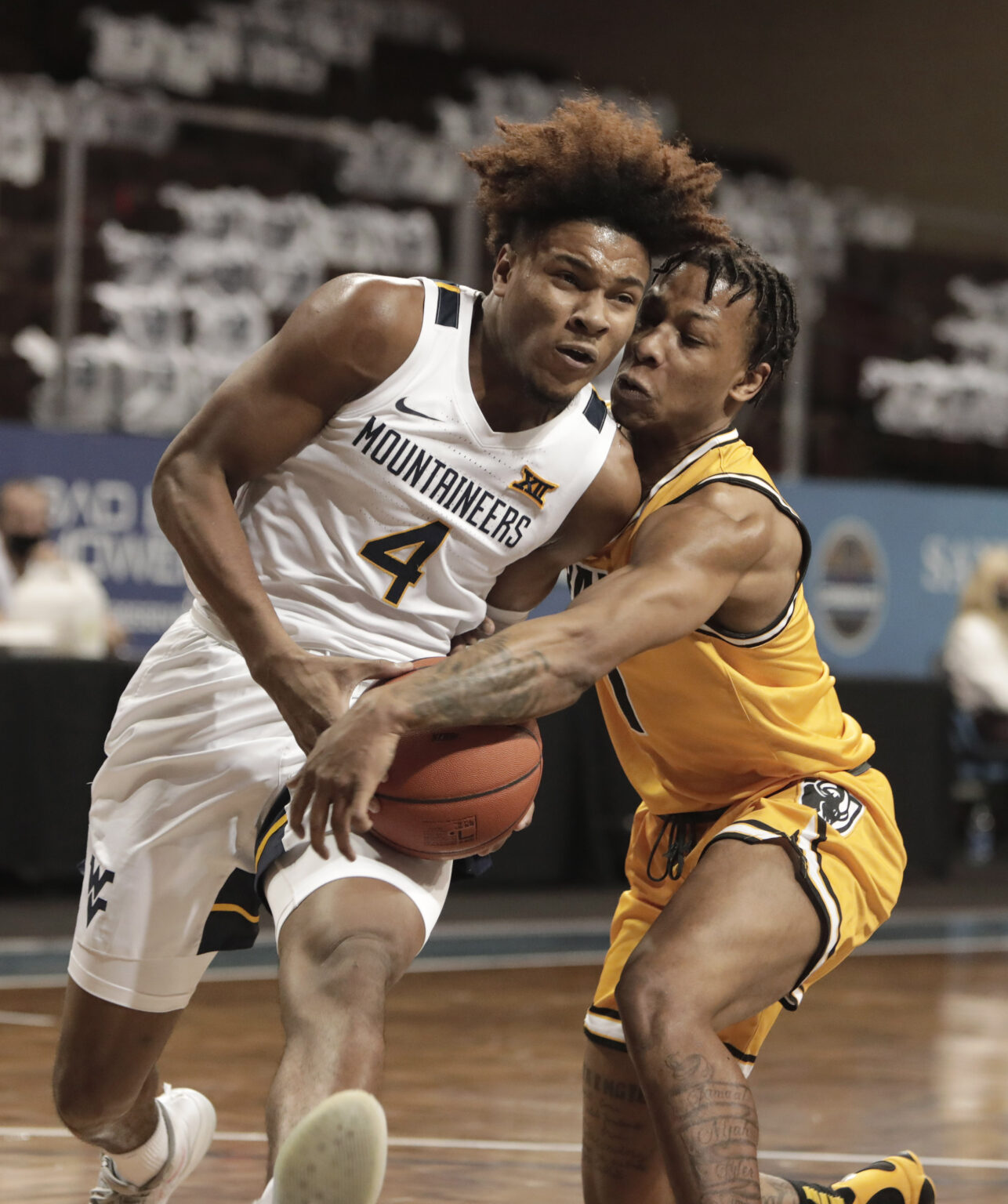 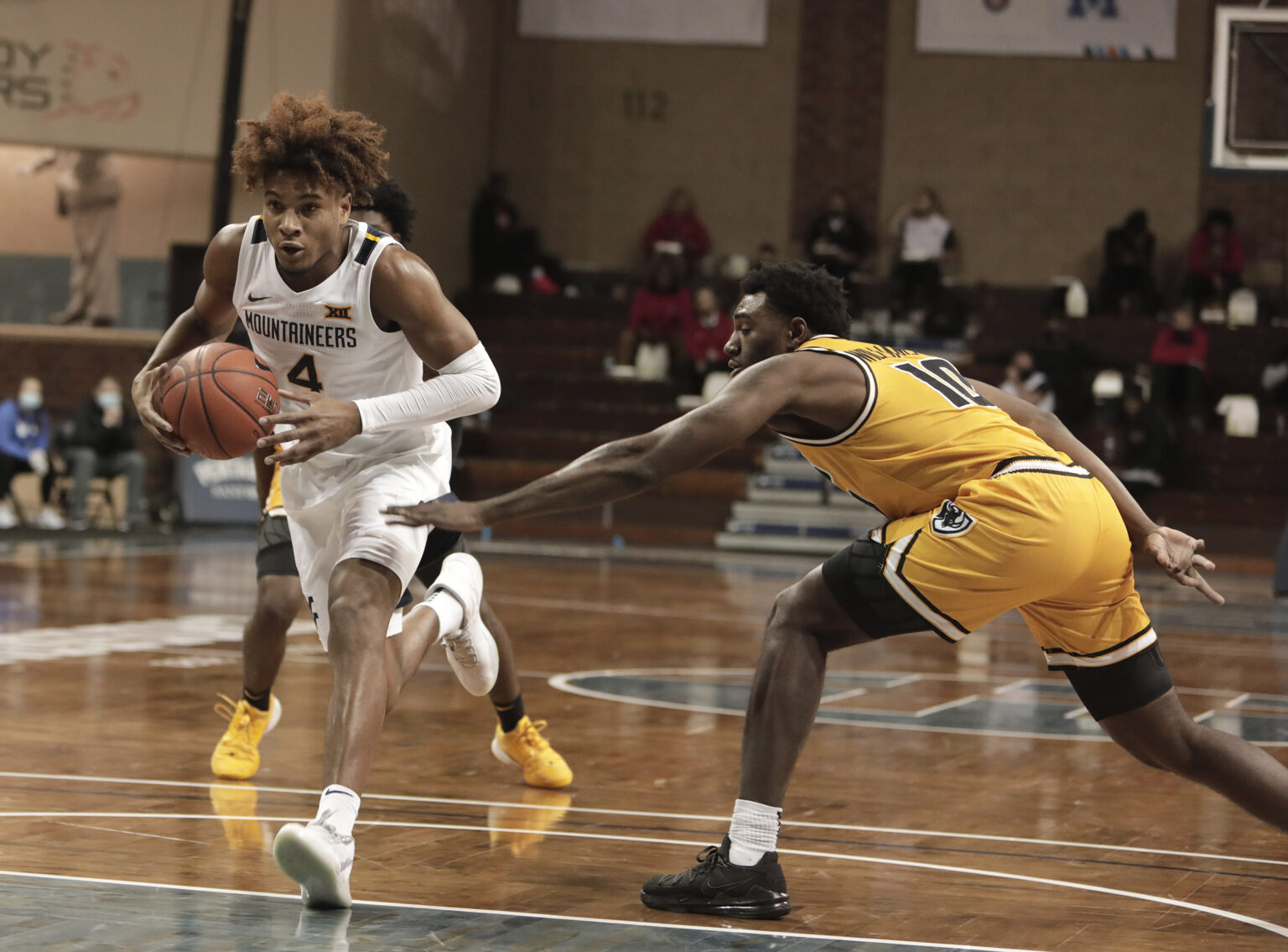 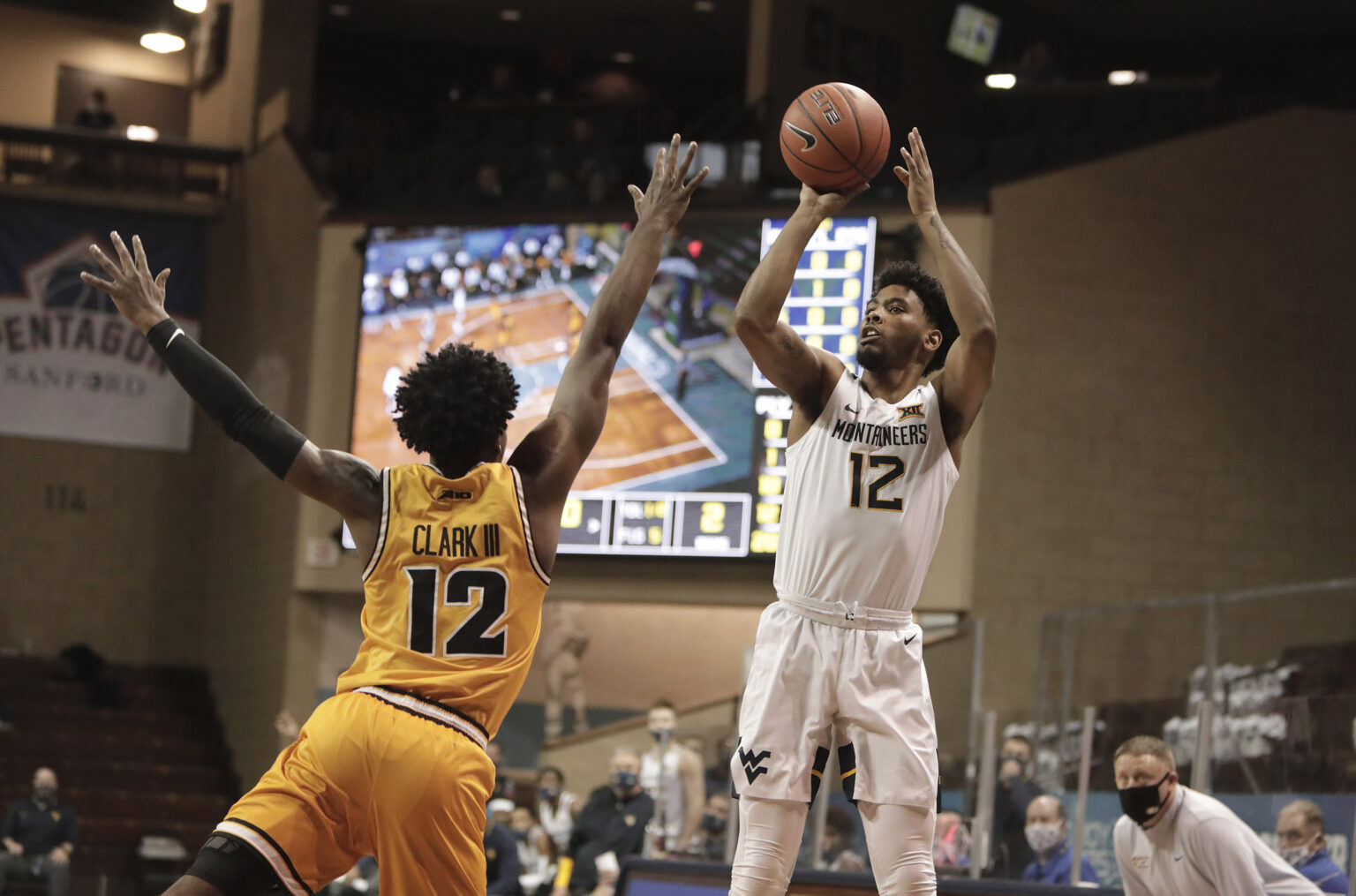 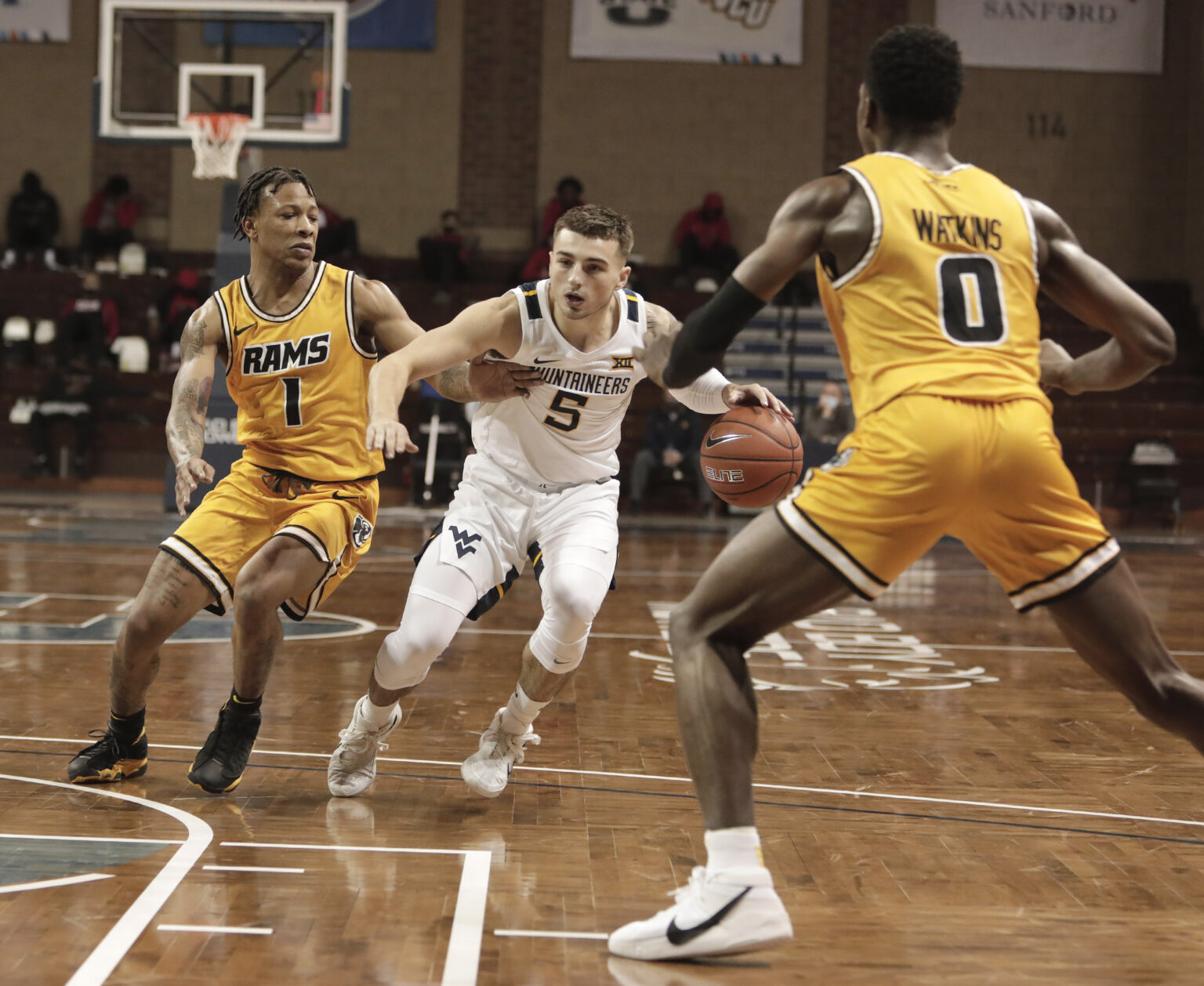 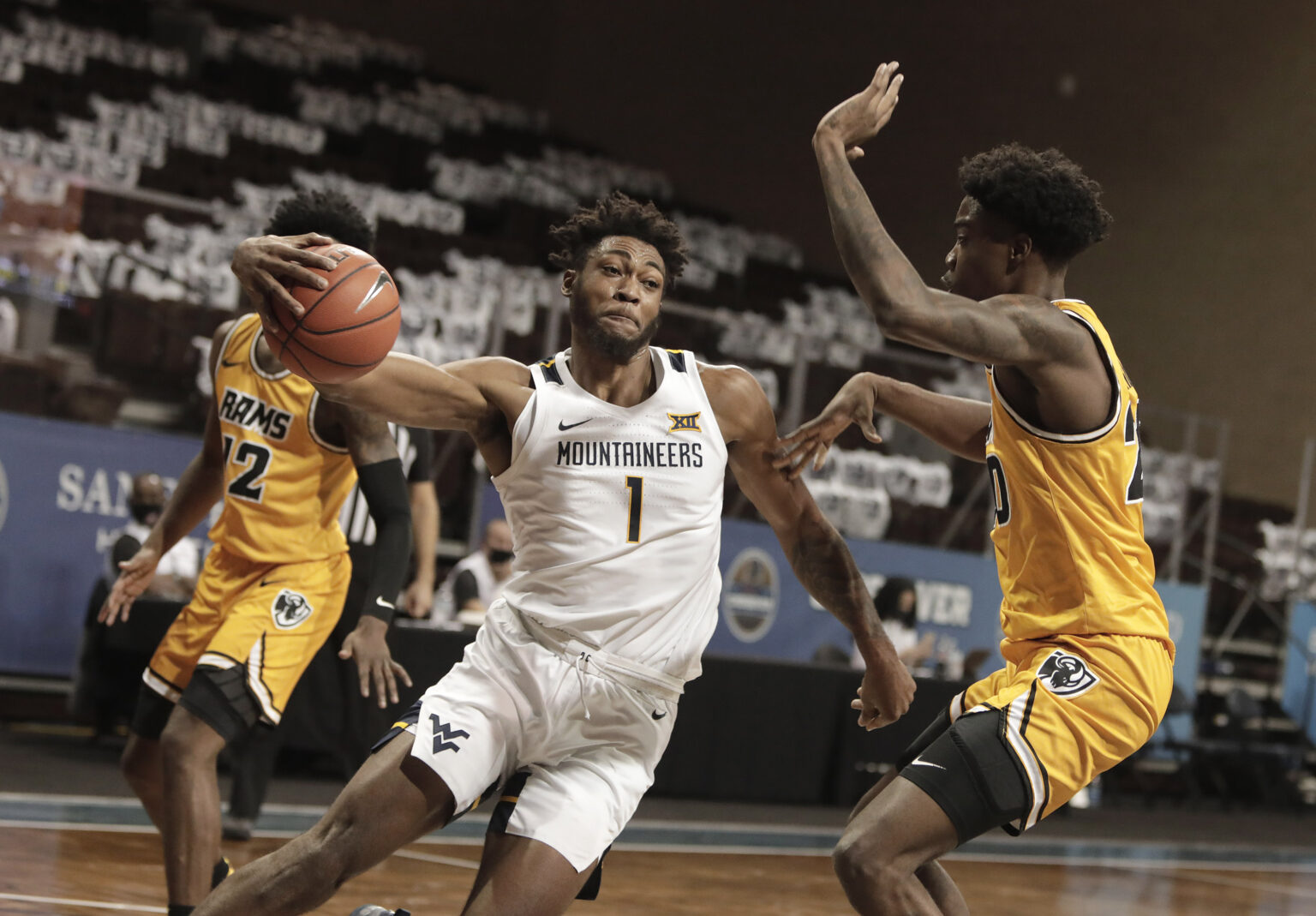 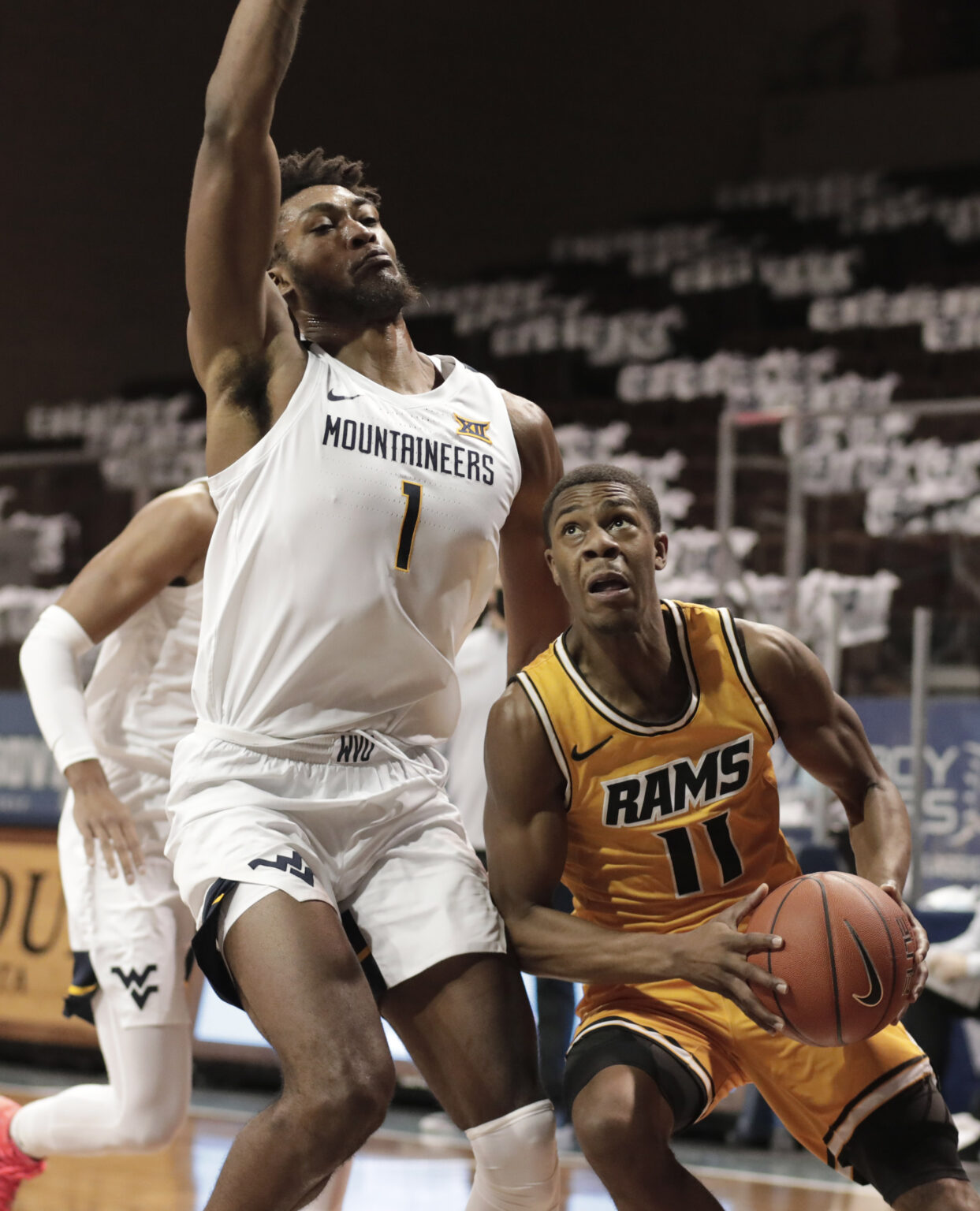 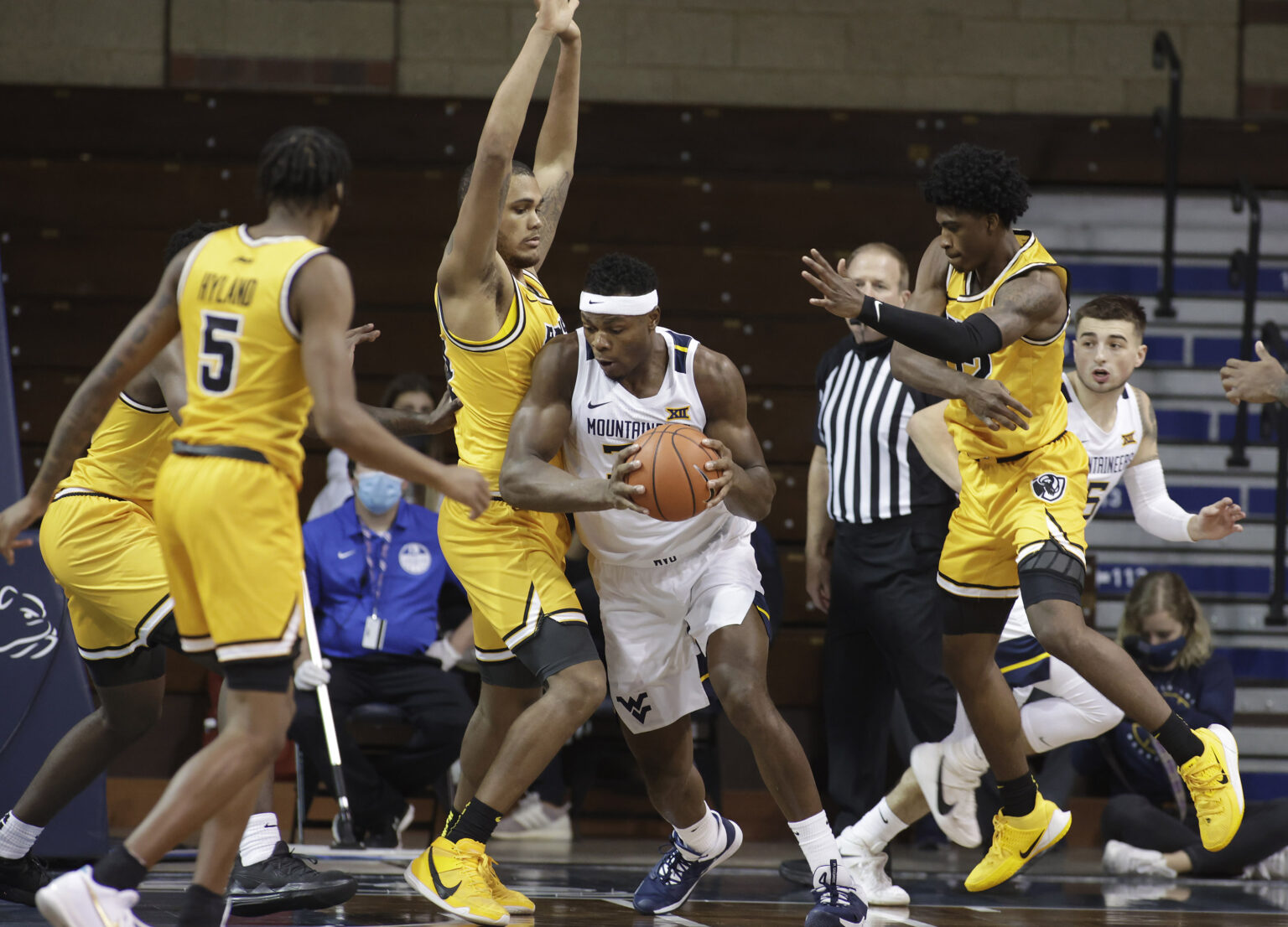 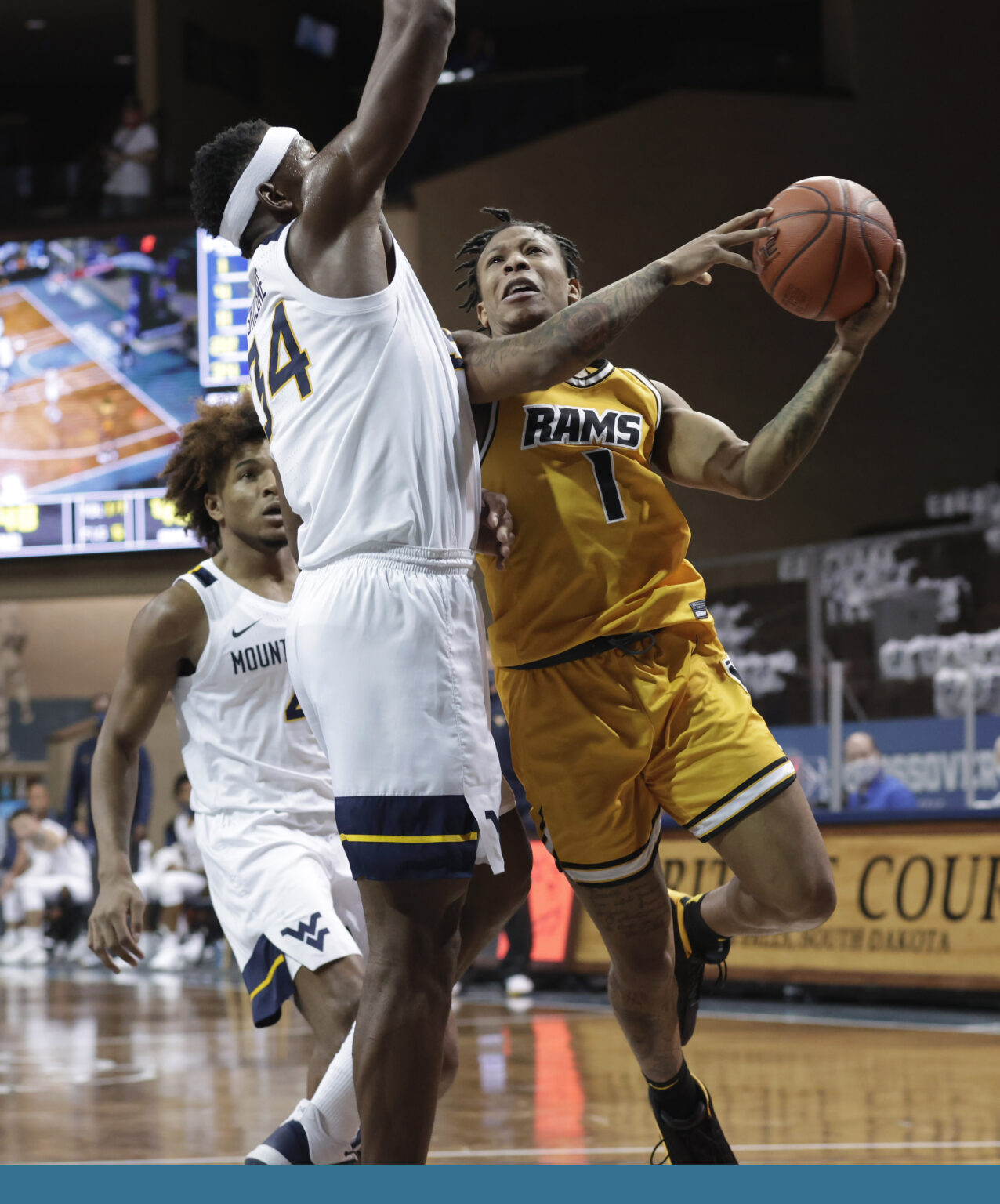 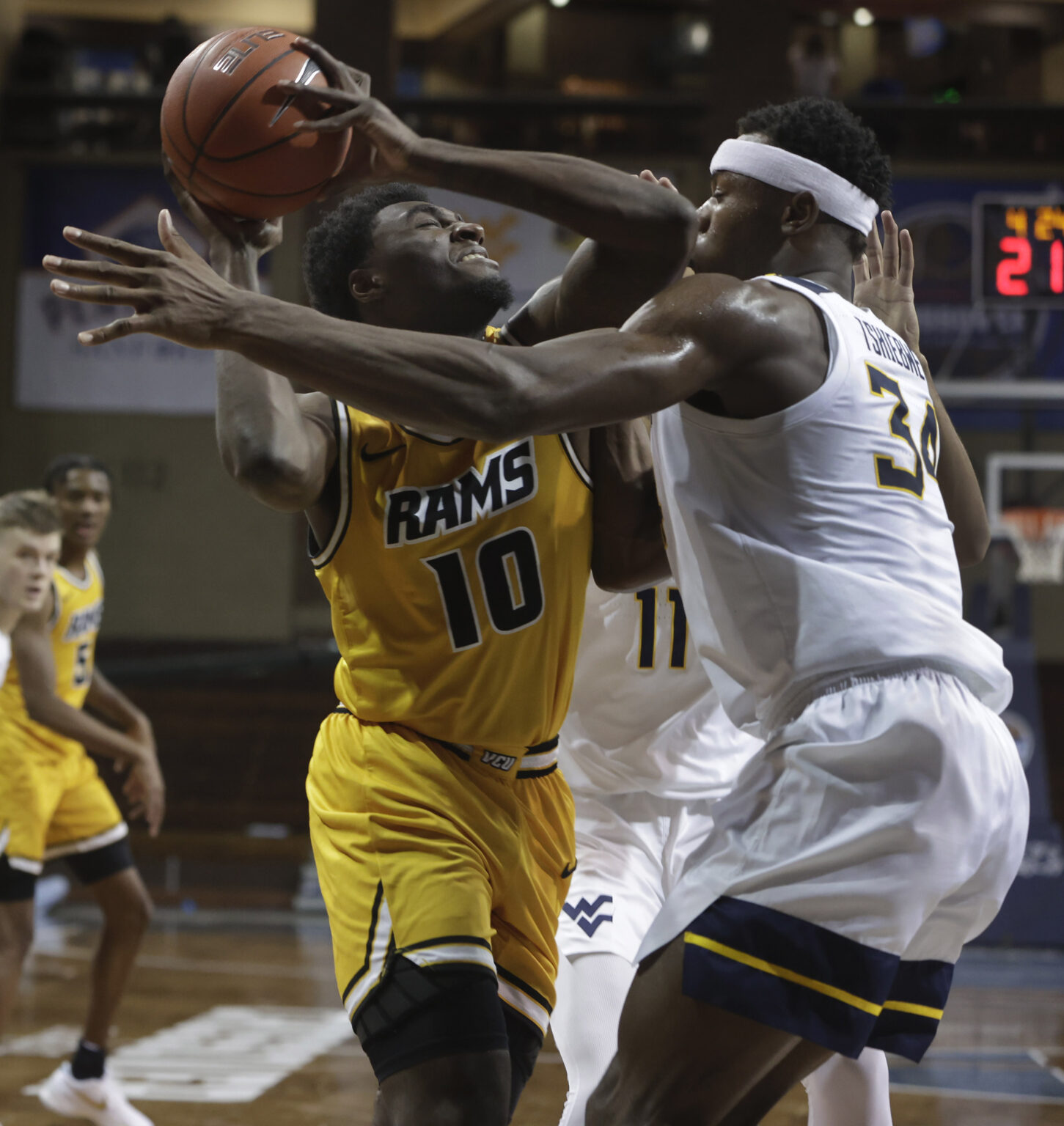 SIOUX FALLS, SD - NOVEMBER 26: Vince Williams Jr. #10 of the Virginia Commonwealth Rams tries to get past Oscar Tshiebwe #34 of the West Virginia Mountaineers during the Bad Boy Mowers Crossover Classic at the Sanford Pentagon in Sioux Falls, SD. (Photo by Richard Carlson/Inertia) 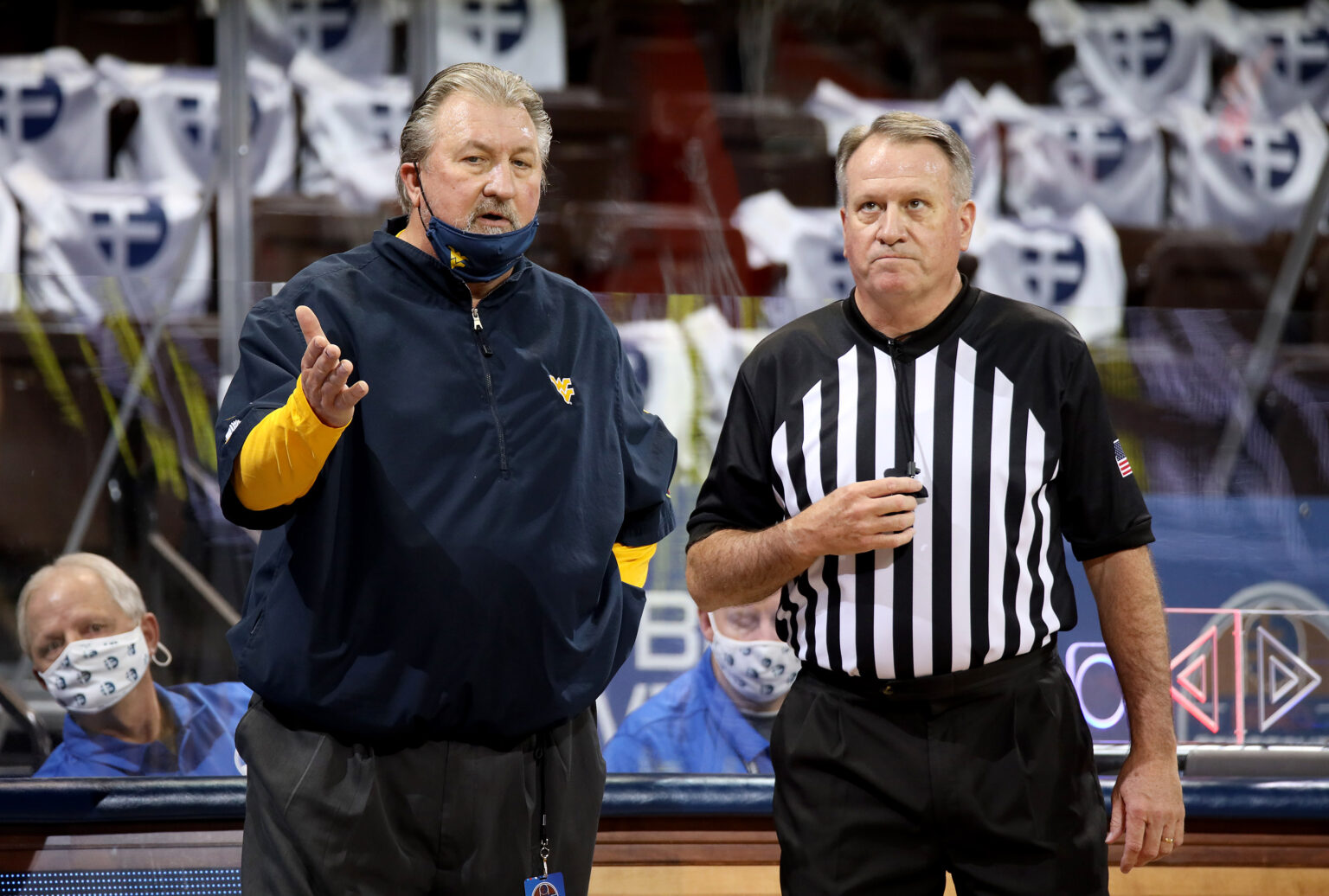 MORGANTOWN, W.Va. — Derek Culver dominated on both ends of the floor for No. 15 West Virginia as the Mountaineers defeated VCU 78-66 in the second semifinal of the Bad Boy Mowers Crossover Classic in Sioux Falls, S.D.

Culver scored a game-high 23 points and grabbed 15 rebounds as the Mountaineers led wire-to-wire for their second victory in less than 24 hours.

West Virginia opened the game on a 13-0 run that was capped by a Deuce McBride three-pointer. The Rams were held off the scoreboard for the first 6:34 of the game and they didn’t convert a field goal until the tenth minute of the contest.

“I thought we did a terrific job, particularly early on, on the glass,” said WVU head coach Bob Huggins. “Derek kept balls alive and scored it close to kind of get us the 10-point lead before our perimeter guys kind of warmed up. When they started making shots, we were able to stretch the lead and kind of got a little bit more comfortable.”

The Mountaineers used a 7-0 run capped by a Sean McNeil triple to take their largest lead of the half at 24-9 with 8:10 to go in the first half. The Rams however immediately responded with a 14-3 run and they later pulled within a basket at 29-27. WVU closed the half on a 13-4 burst to take a 9-point lead into the locker room at 42-33.

Culver collected 15 points and 8 rebounds in the opening half.

“I feel like if I just take my time and get the ball in the post and see what if I have, and if they are not going to double-team me, I can work on my post moves,” Culver said. “But if they are I can kick it out to my teammates like Sean and Taz.”

VCU crept within 3 points early in the second but WVU received 3 consecutive triples (McNeil, Taz Sherman, McNeil) to stretch their lead to a dozen points with 13:10 to go. After West Virginia stretched their game-best lead to 16 points with 8:30 to go, the Rams went on an 8-1 run, closing the gap to single digits at 65-56. The Mountaineers would allow just two more field goals the rest of the way.

After scoring a career-high 23 points in Wednesday’s quarterfinal win over South Dakota State, Deuce McBride scored a dozen points. Oscar Tshiebwe posted a double-double with 11 points and a game-high 16 rebounds.

“Oscar is going to be a factor regardless,” Culver said. “He is still going to demand respect in the post. They can’t really double-team me. If they double-team me, I have another person who does the same thing I do. Oscar is strong as an ox so you really can’t take the ball from him.”

“I know I can make shots,” McNeil said. “That’s what Huggs brought me here to do. The only way to make shots is to shoot them.”

“They don’t lose their poise,” Huggins said. “They run what (head coach Rick Stansbuy) wants them to run extremely well.”