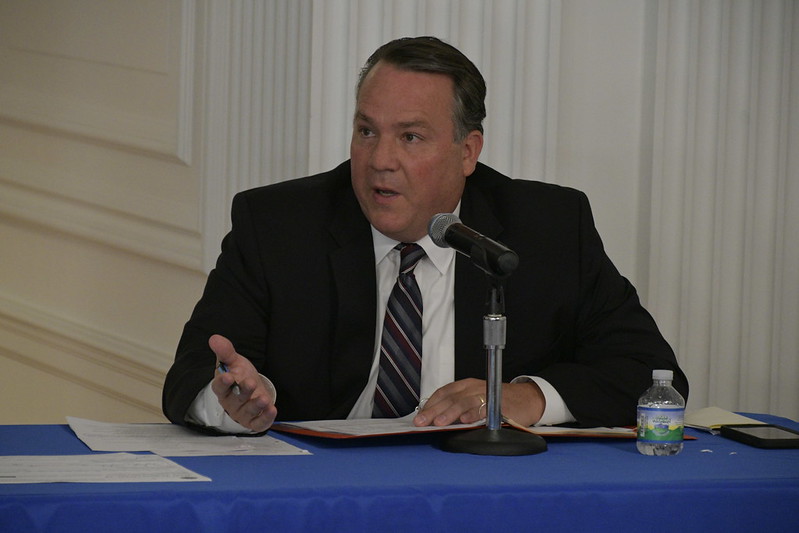 Congressman Alex Mooney appears at a briefing about the state's coronavirus response.

A newly-filed friend-of-the-court brief from 106 House members expresses support for a bid filed by the Texas attorney general to invalidate election results in Michigan, Georgia, Wisconsin and Pennsylvania.

“This brief,” they wrote, “presents [our] concern as Members of Congress, shared by untold millions of their constituents, that the unconstitutional irregularities involved in the 2020 presidential election cast doubt upon its outcome and the integrity of the American system of elections.”

Senator Shelley Moore Capito, R-W.Va., released a statement near the end of November that election results from around the country show Biden as the president-elect. She said she would respect the certified results.

“I have been clear that President Trump — like any candidate for office—has the right to request recounts and to raise legal claims before our courts. However, at some point, the 2020 election must end,” Capito said then.

The Texas challenge contends the four states approved changes to the electoral process, during the coronavirus pandemic, without legislative approval.

The lawsuit asks the U.S. Supreme Court to prevent the four states from appointing presidential electors to the Electoral College. That could invalidate millions of votes.

Such a lawsuit asking for that many votes to be invalidated is unprecedented and follows on the heels of dozens of court losses by Trump supporters.

West Virginia Attorney General Patrick Morrisey signed onto another friend-of-the-court filing this week. Gov. Jim Justice and Secretary of State Mac Warner said they support the move.  All are Republicans. Justice said he received a call from Trump about the matter.

U.S. Attorney General William Barr, usually a stalwart ally of the president, said earlier this month the Justice Department has not uncovered evidence of widespread voter fraud that would change the election’s outcome.

Mooney, in an appearance this week on MetroNews’ “Talkline,” said Barr should have looked harder.

“If you don’t look and check, if you don’t open the door and check on it,” Mooney said. “You have to look.”

Mooney, R-W.Va., said there’s still time before the Jan. 20 inauguration to straighten out any challenges in court.

“This is a big deal. This is the president of the United States,” Mooney said on “Talkline. “Let’s just make sure the voters can trust the system. If we don’t have trust in the election results, we have a bigger problem.”