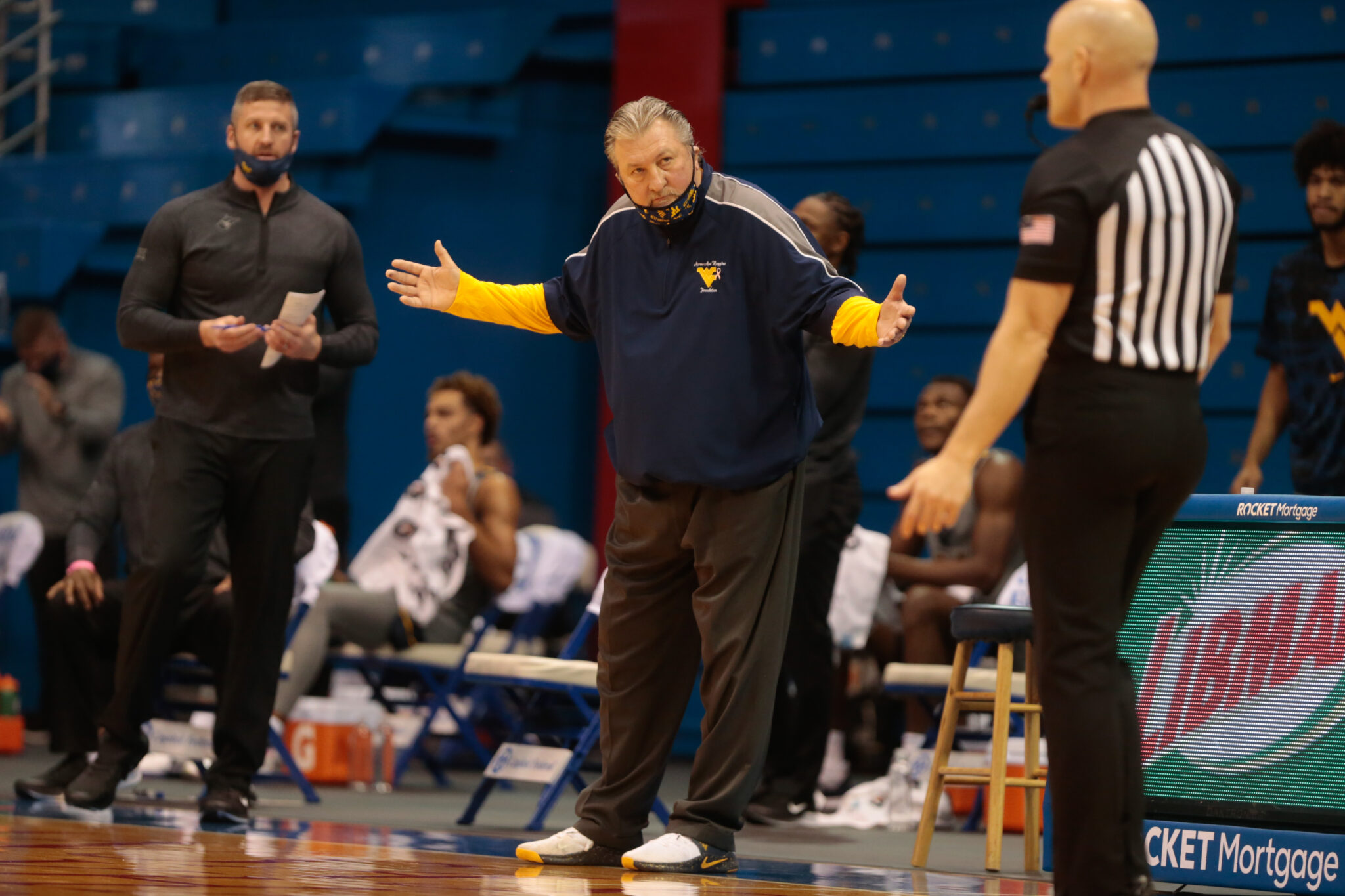 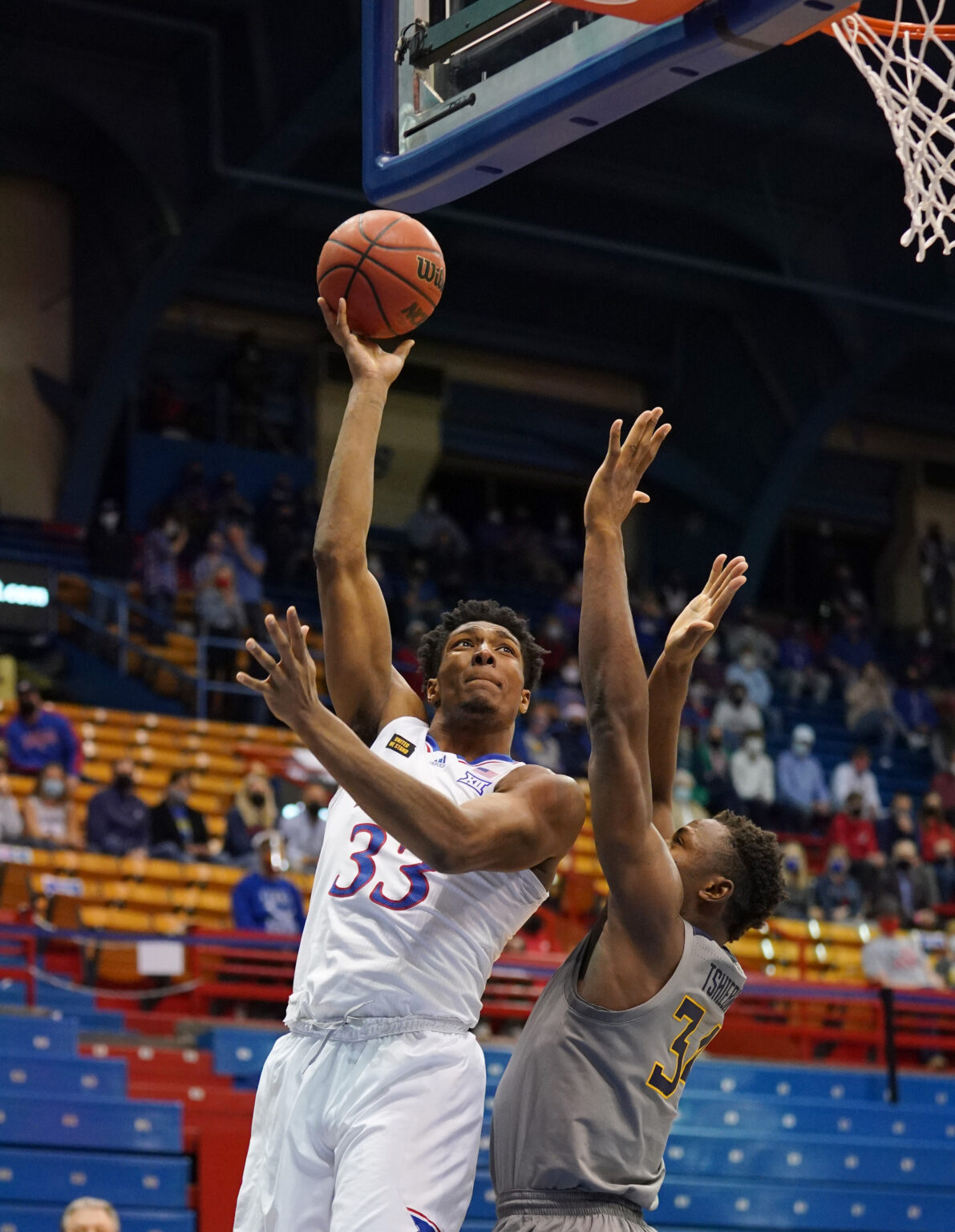 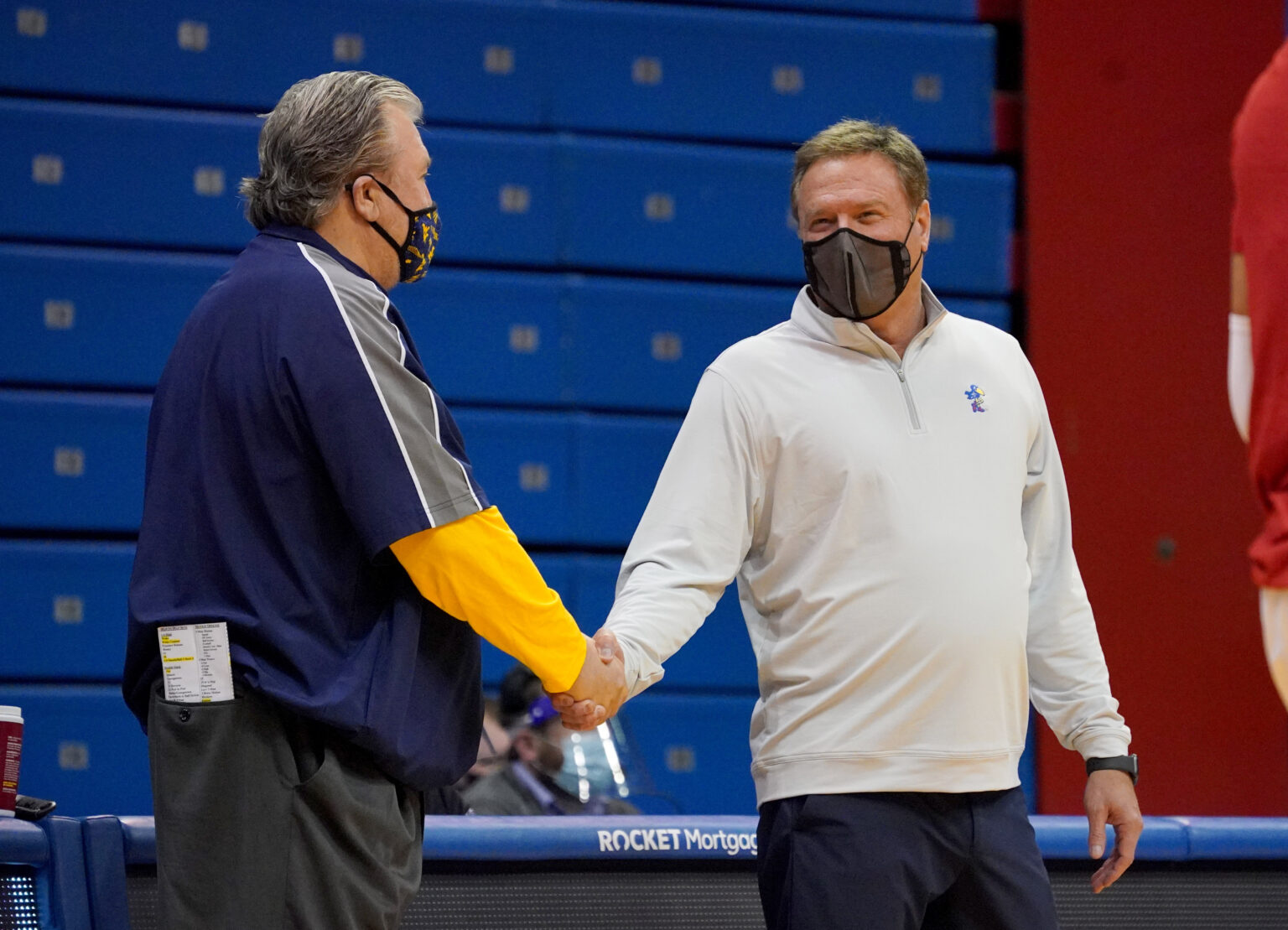 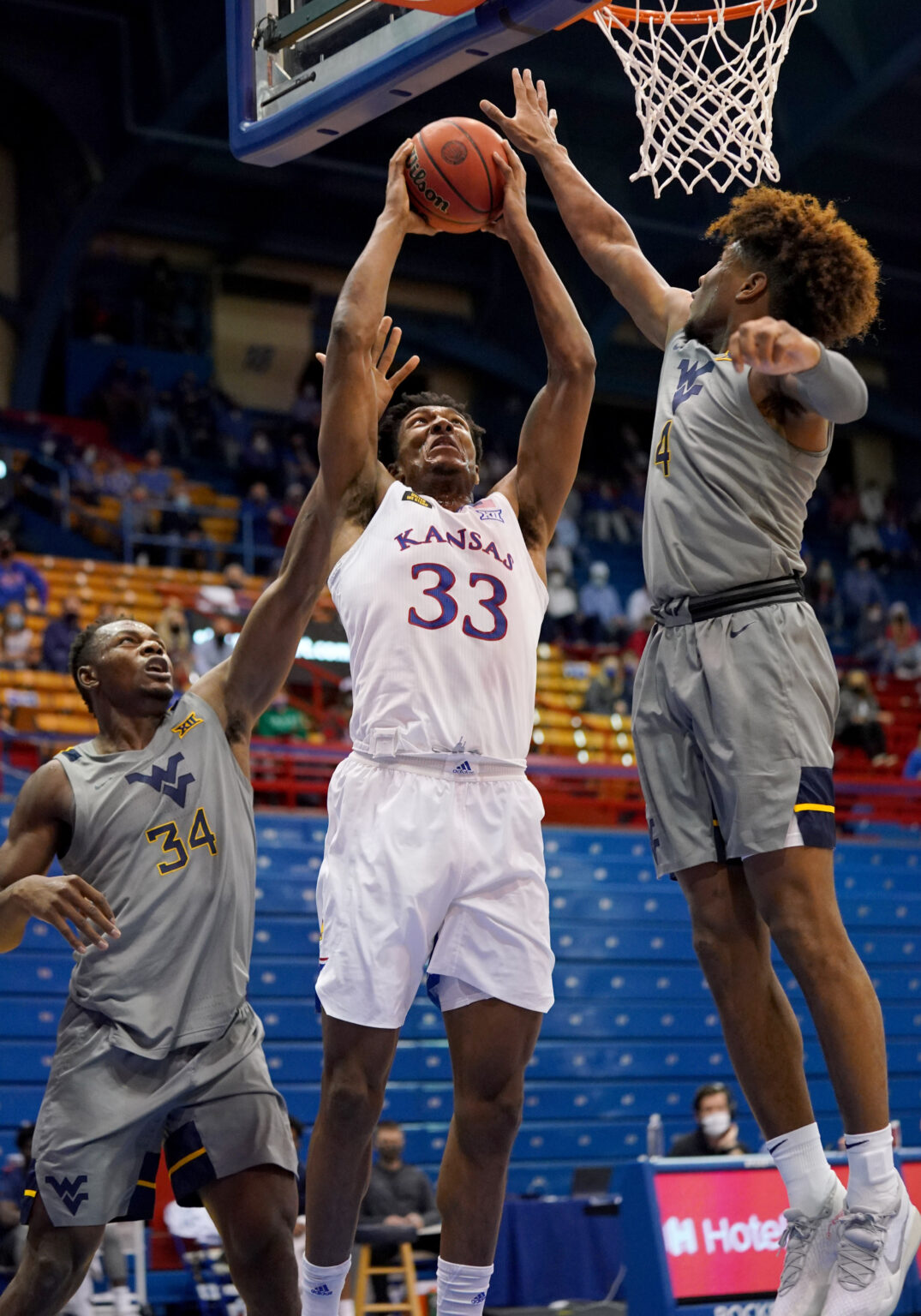 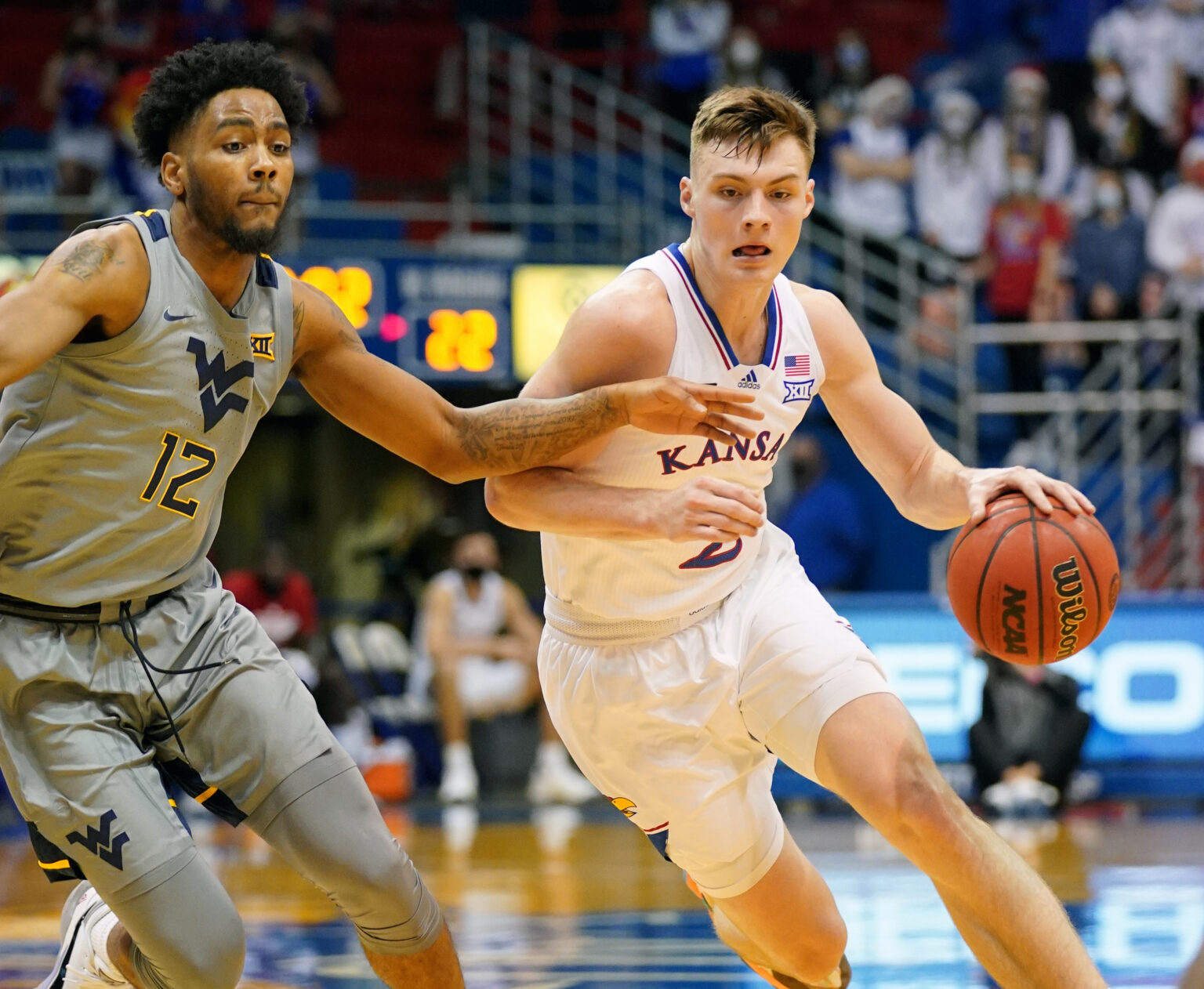 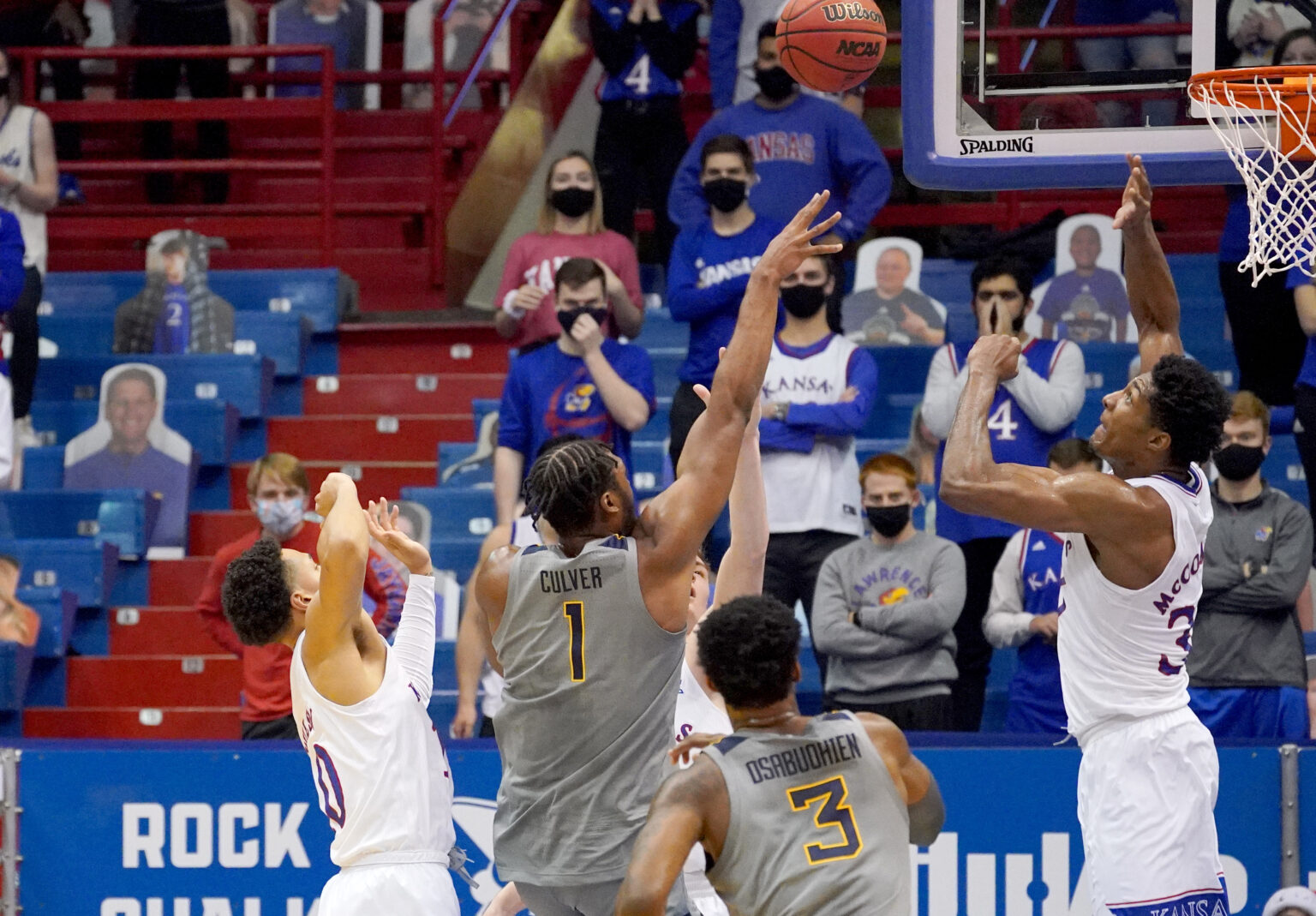 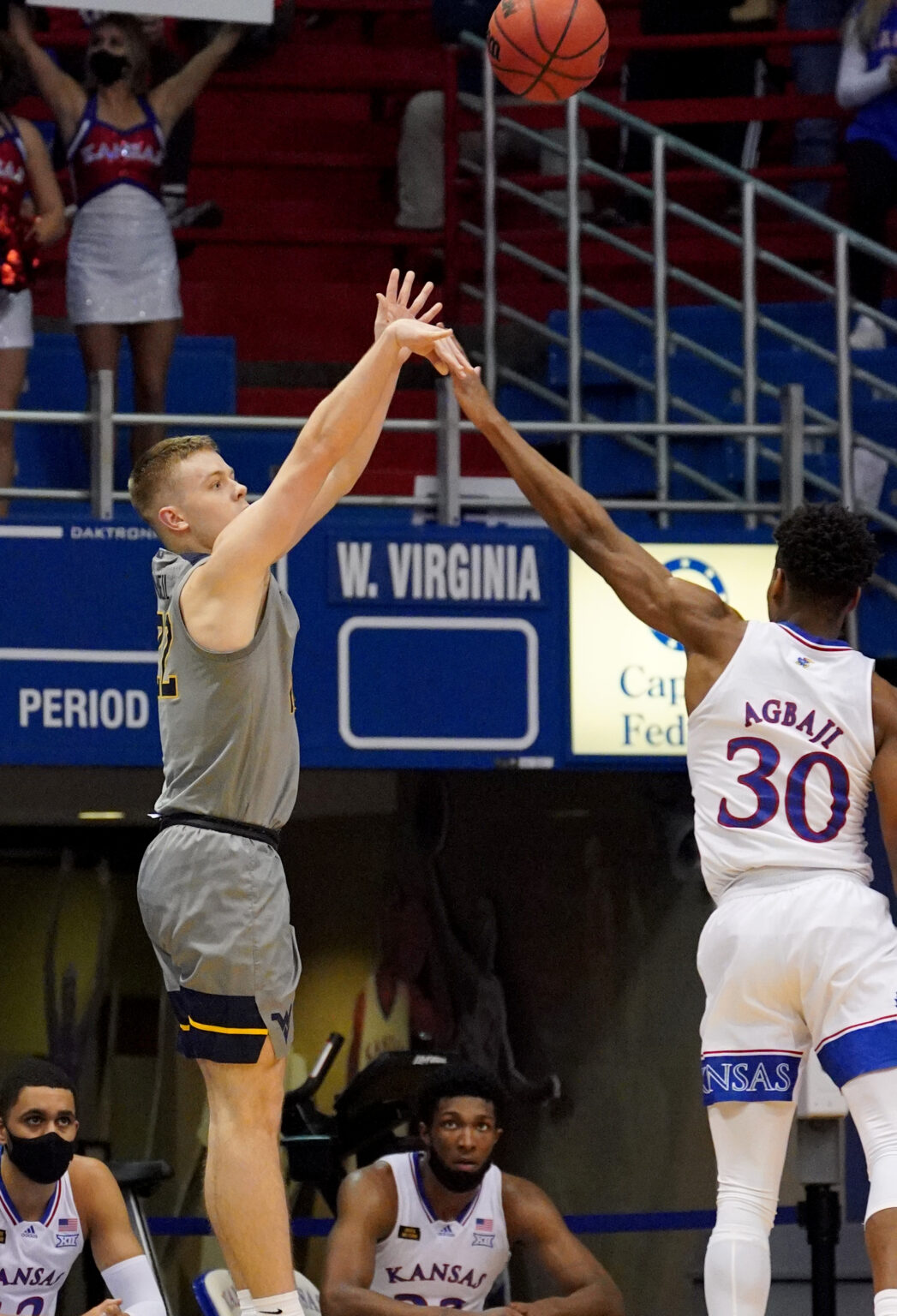 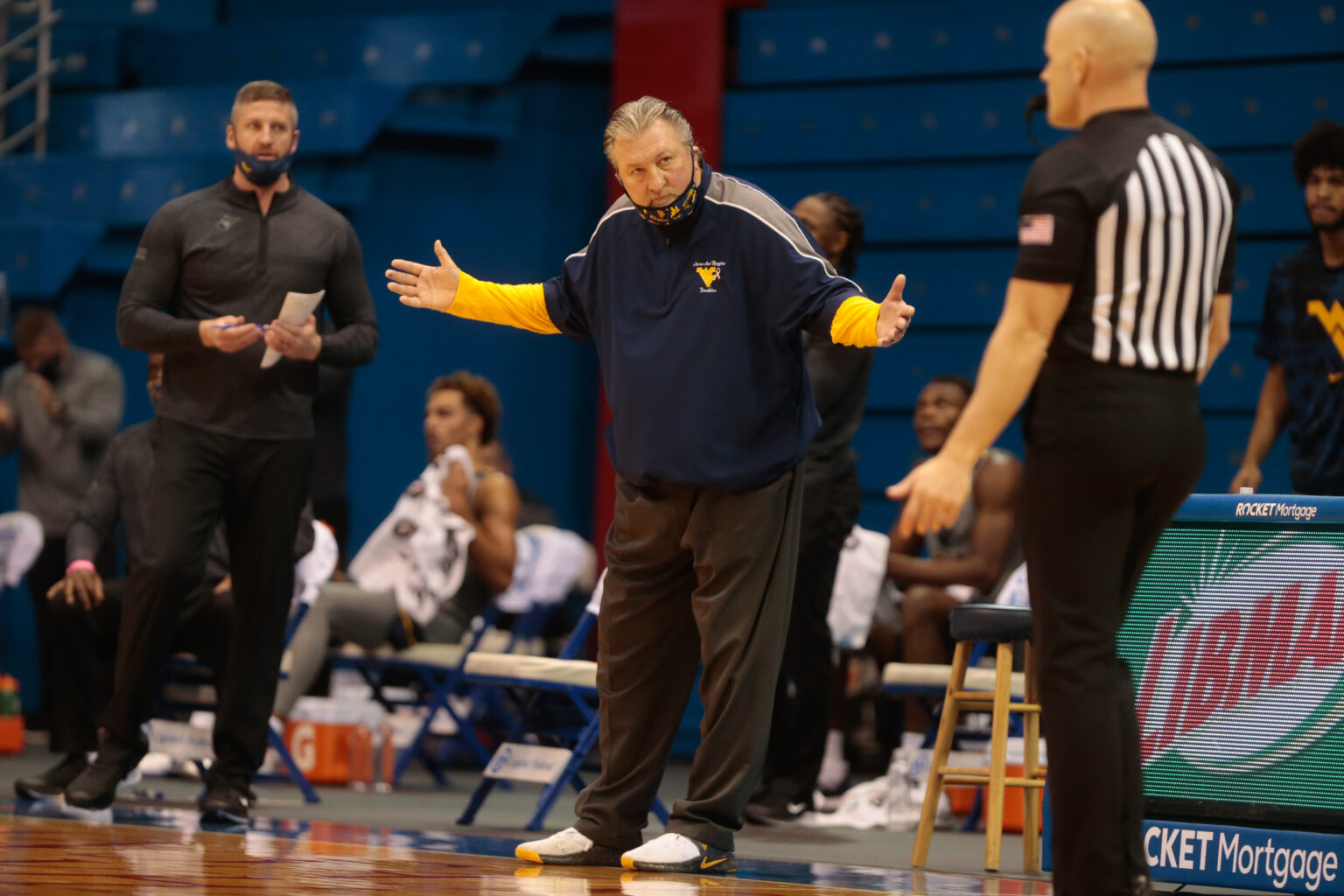 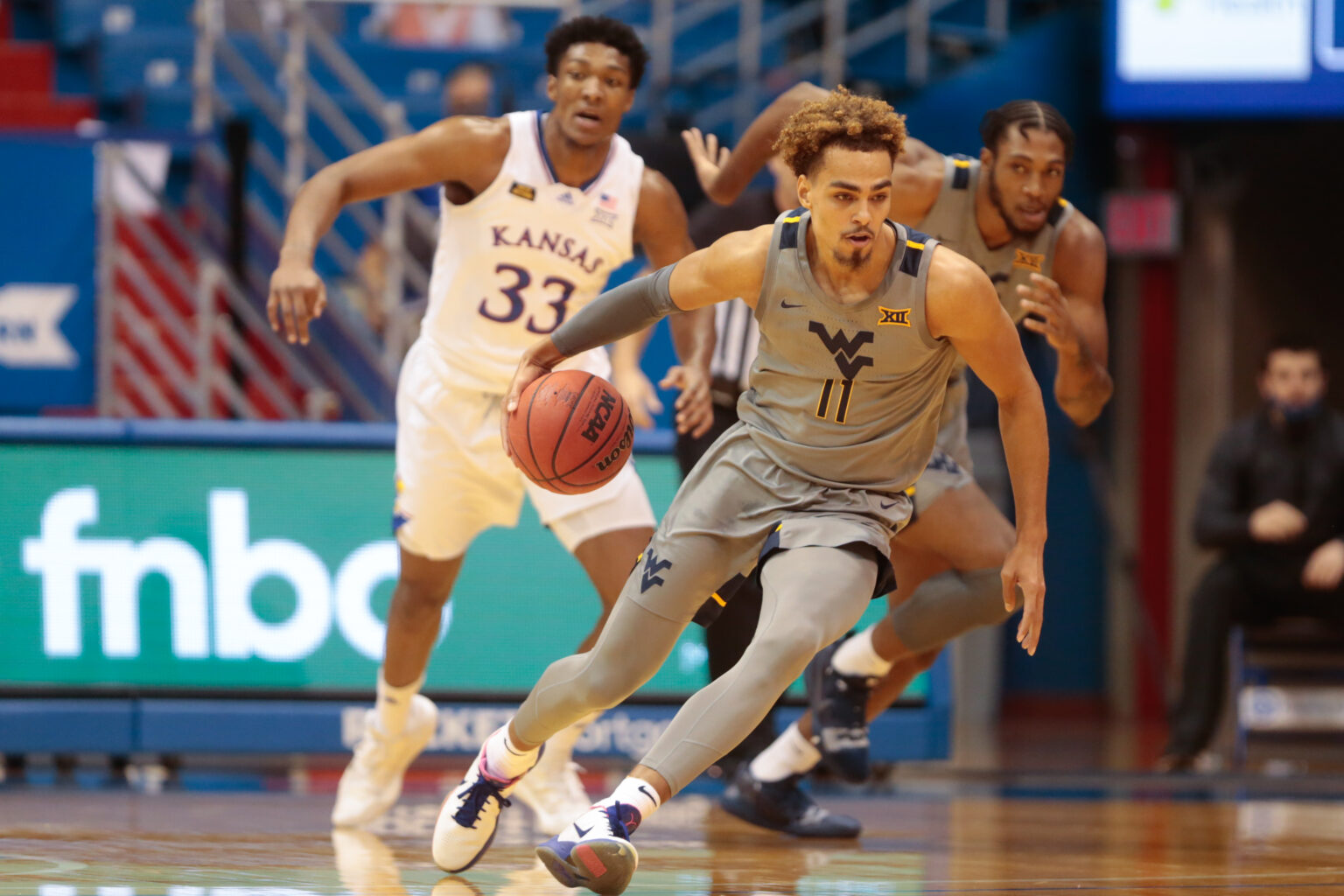 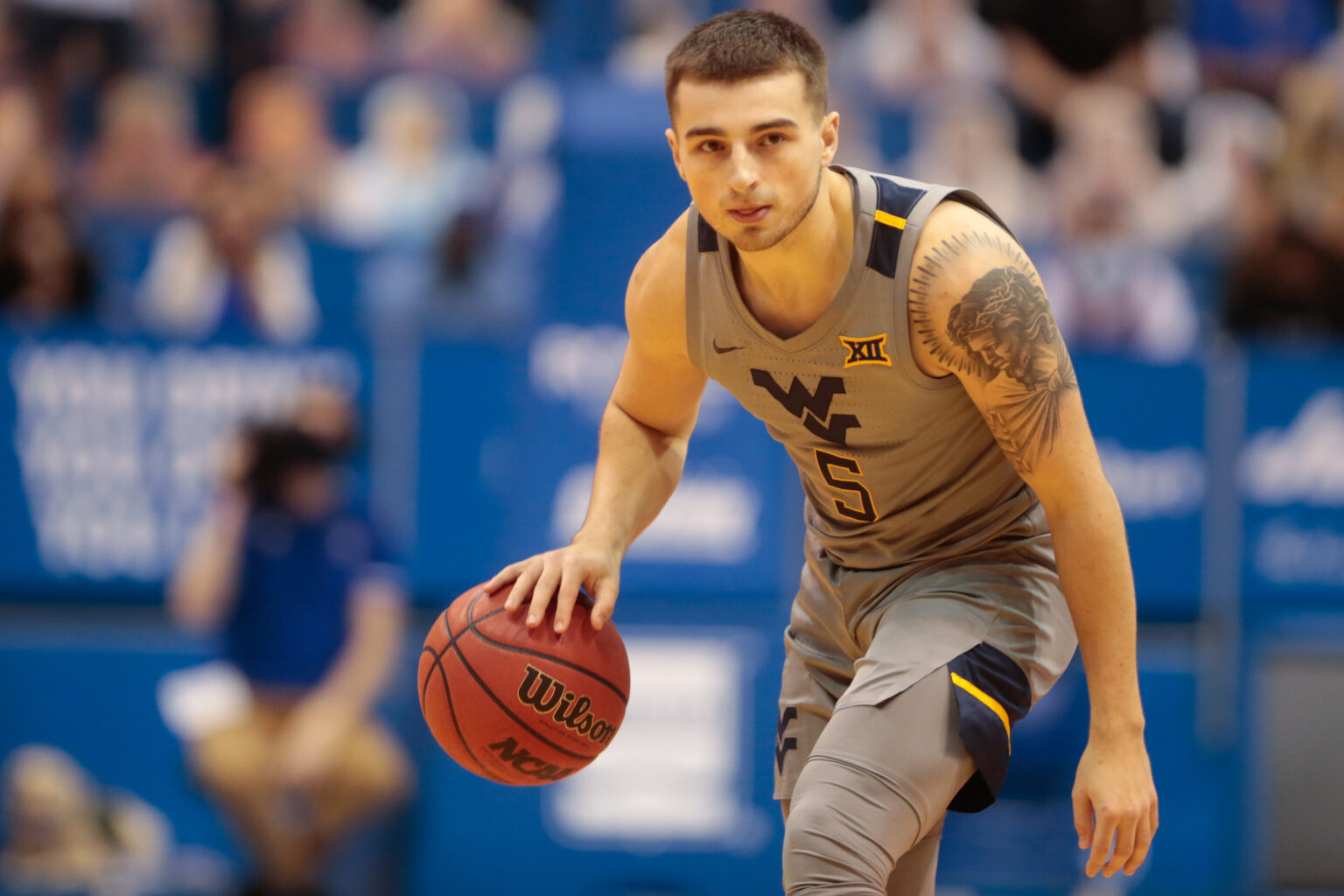 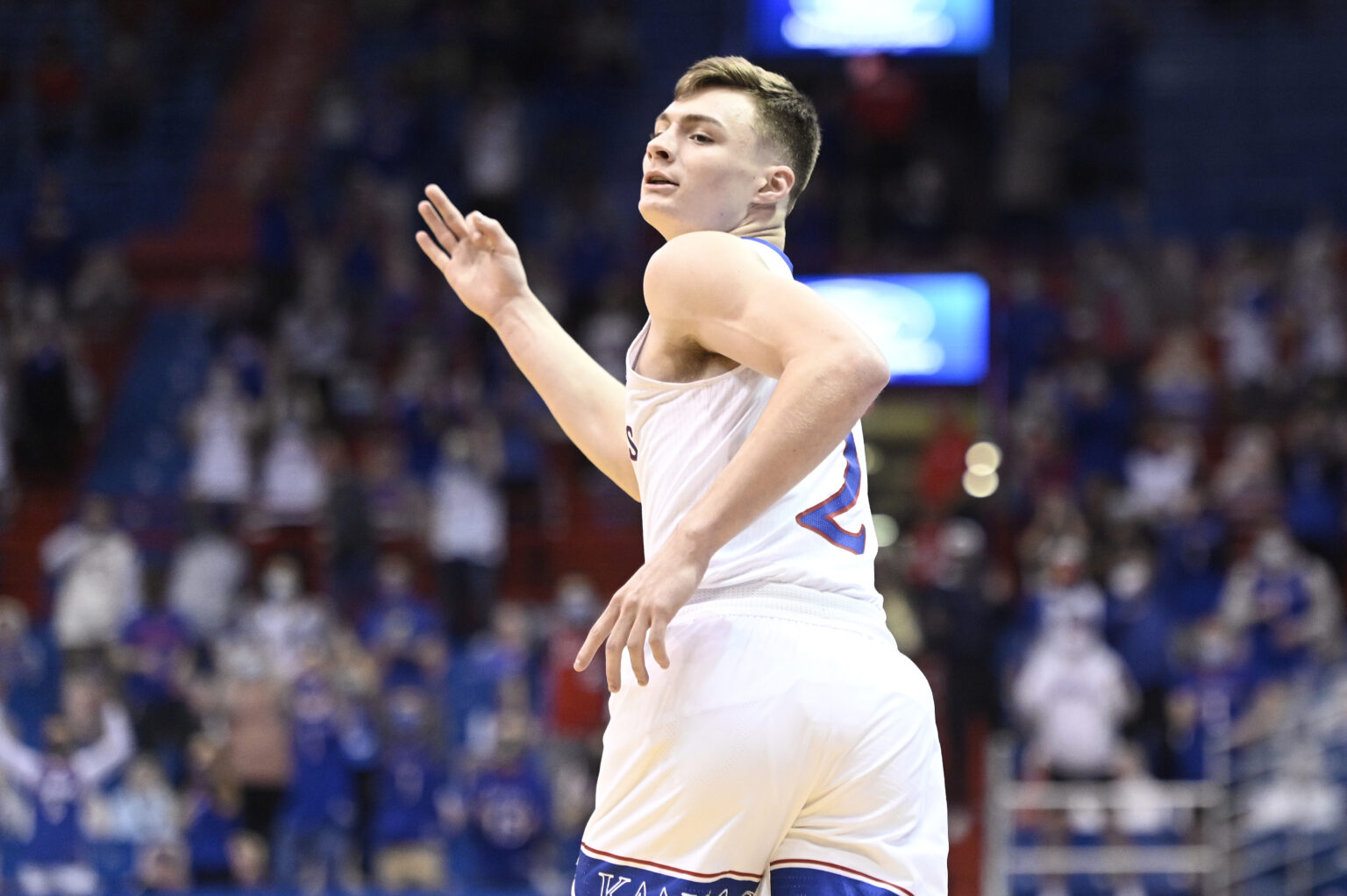 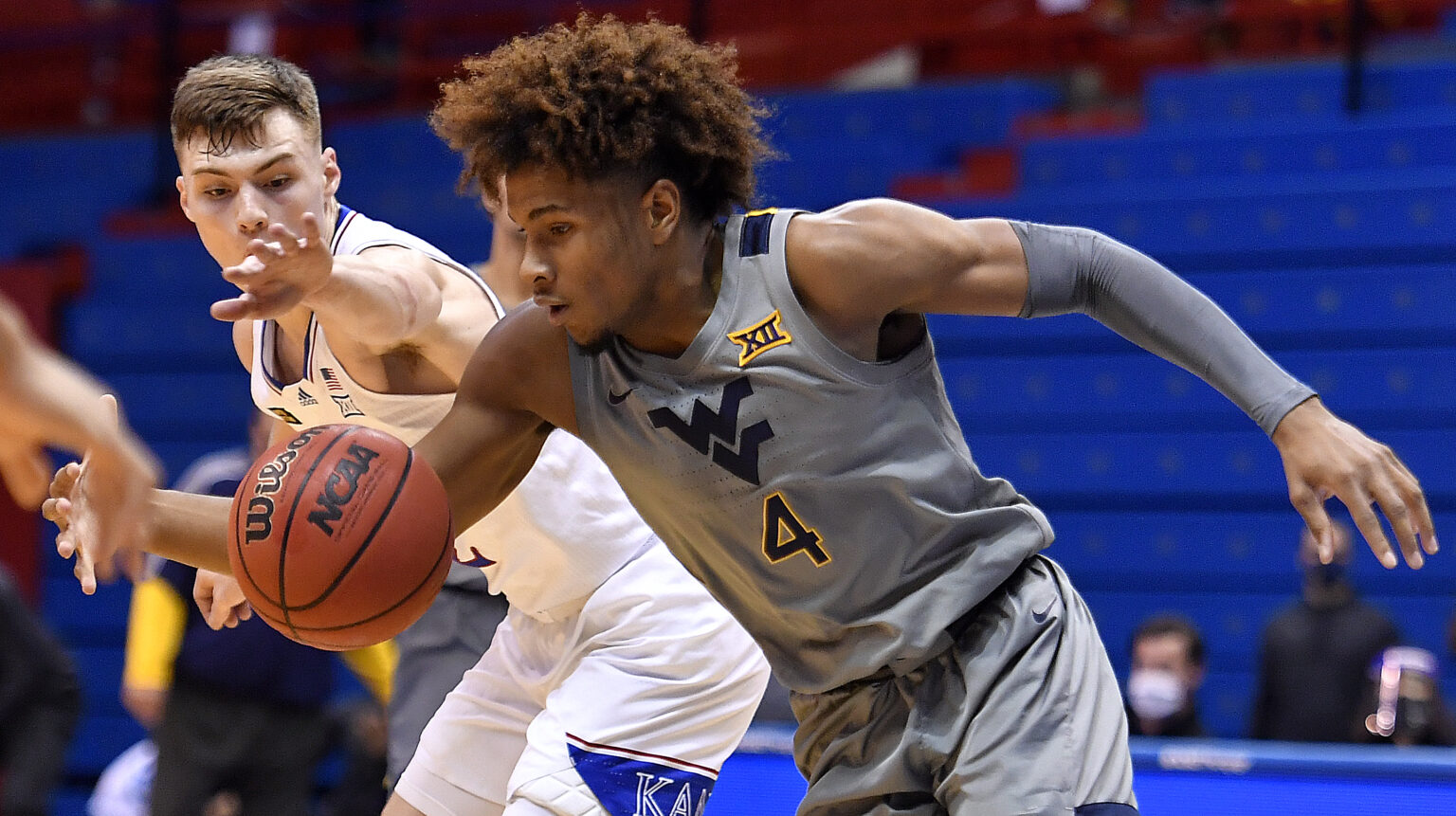 KU’s Christian Braun, left, goes for a steal on West Virginia’s Miles McBride during the first half of Tuesday night’s Big 12 Conference game at Allen Fieldhouse. (Photo by Richard Sugg) 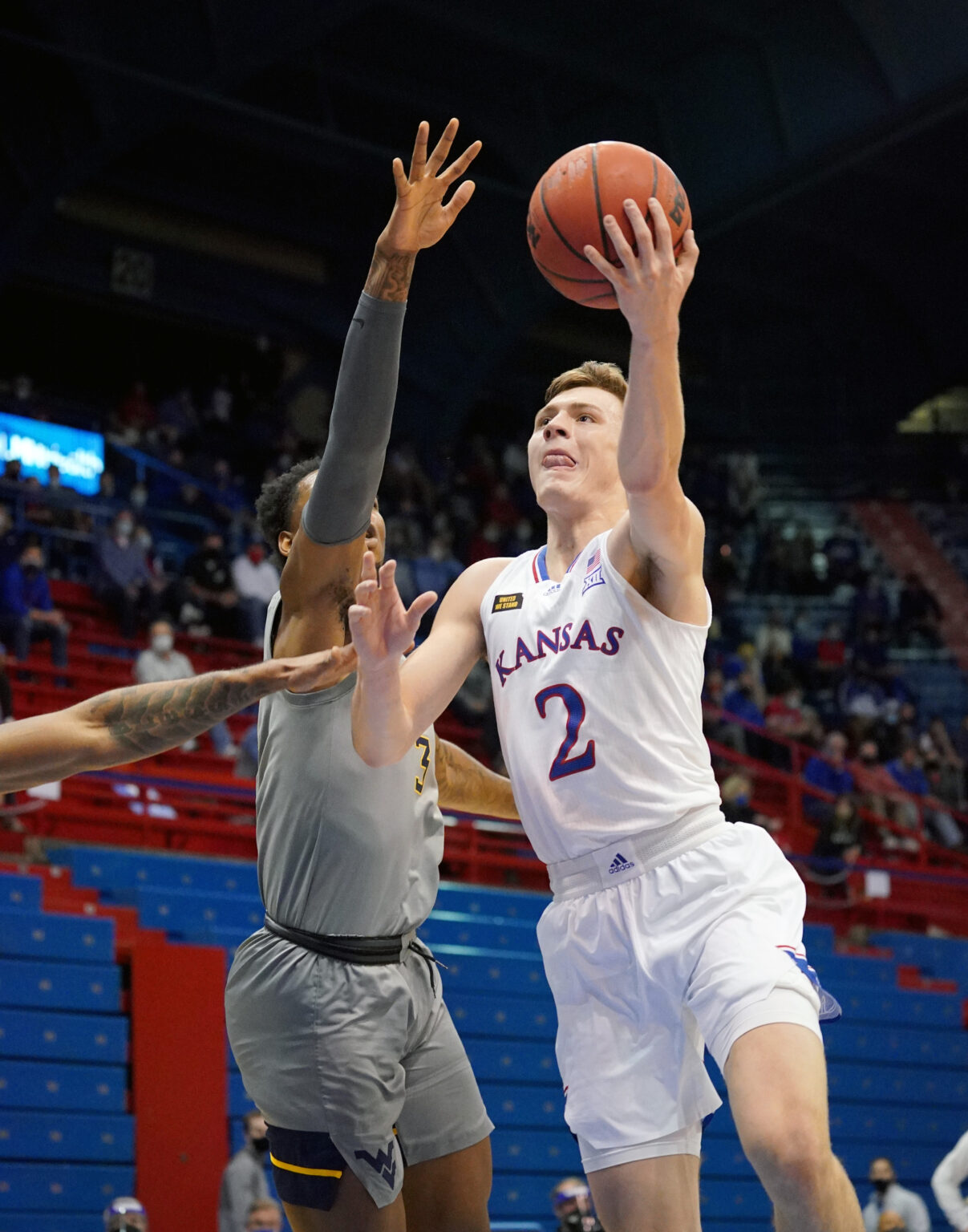 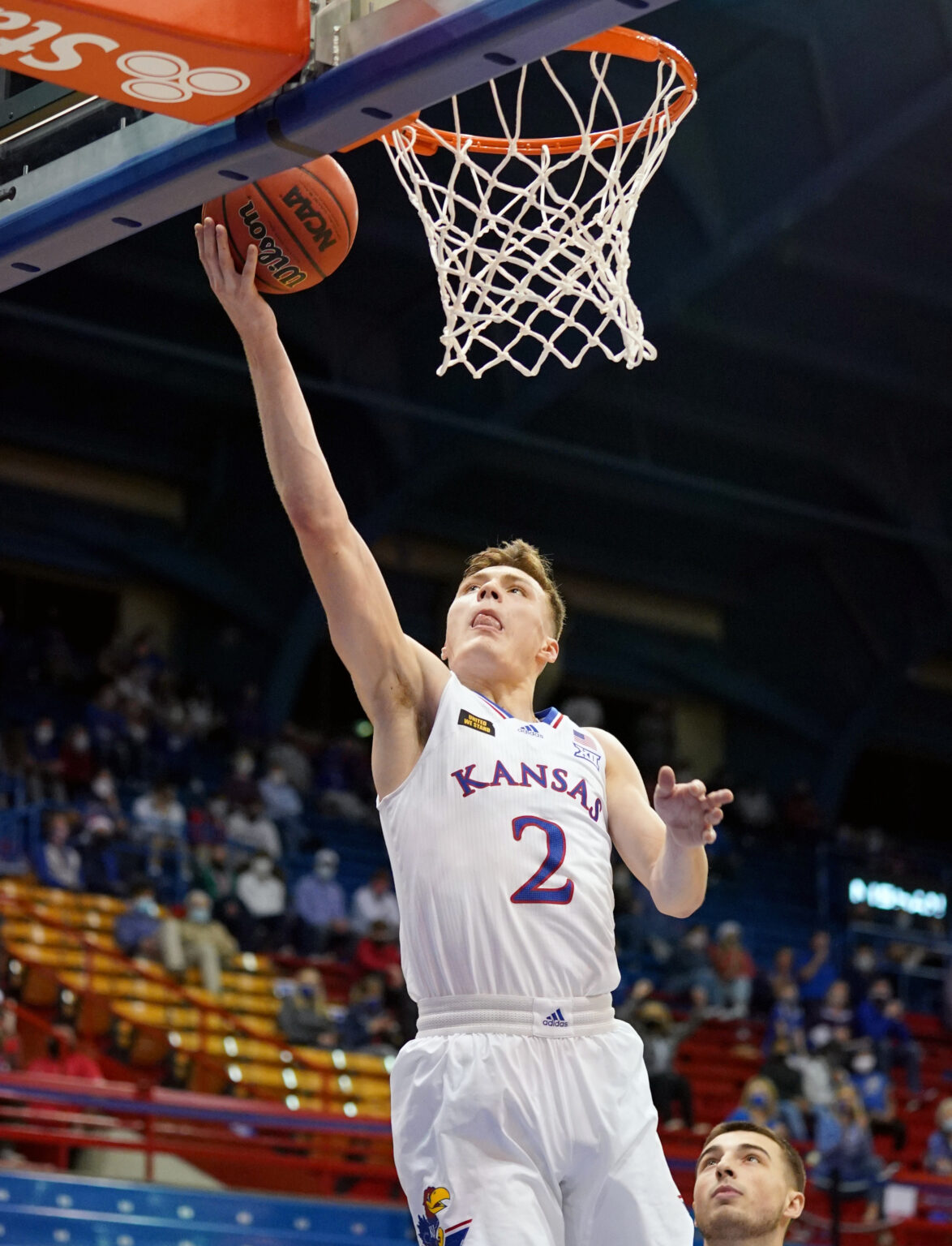 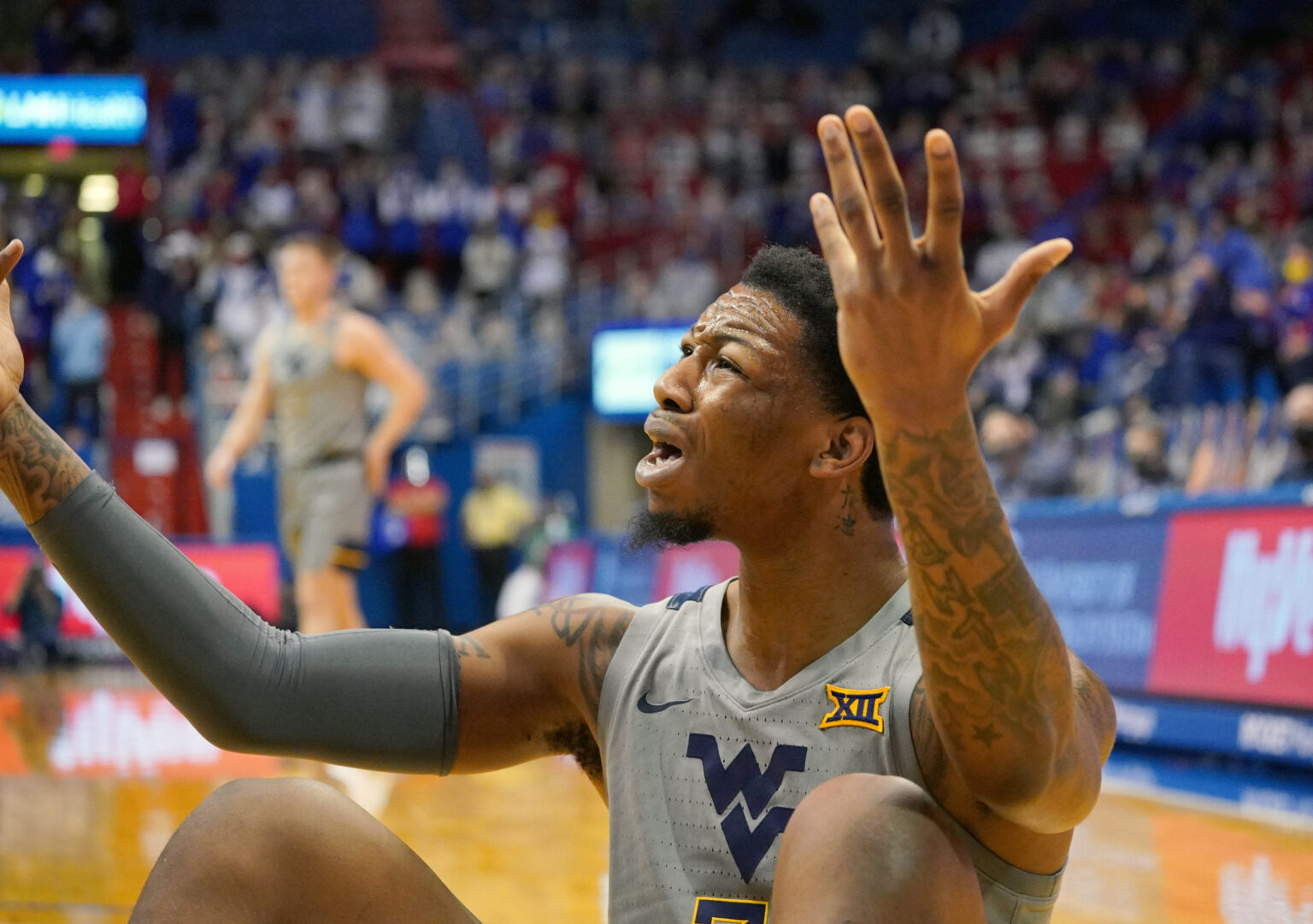 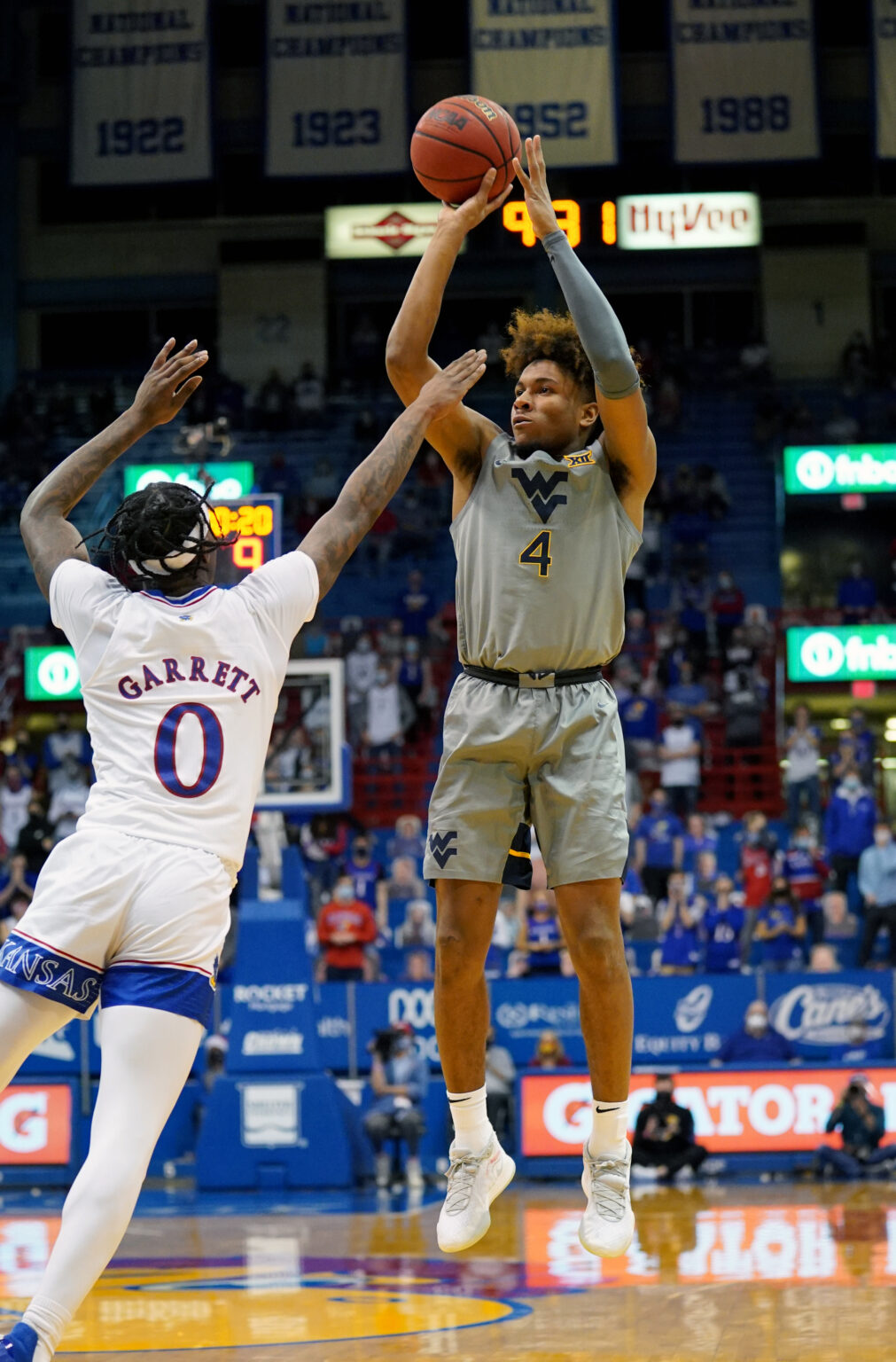 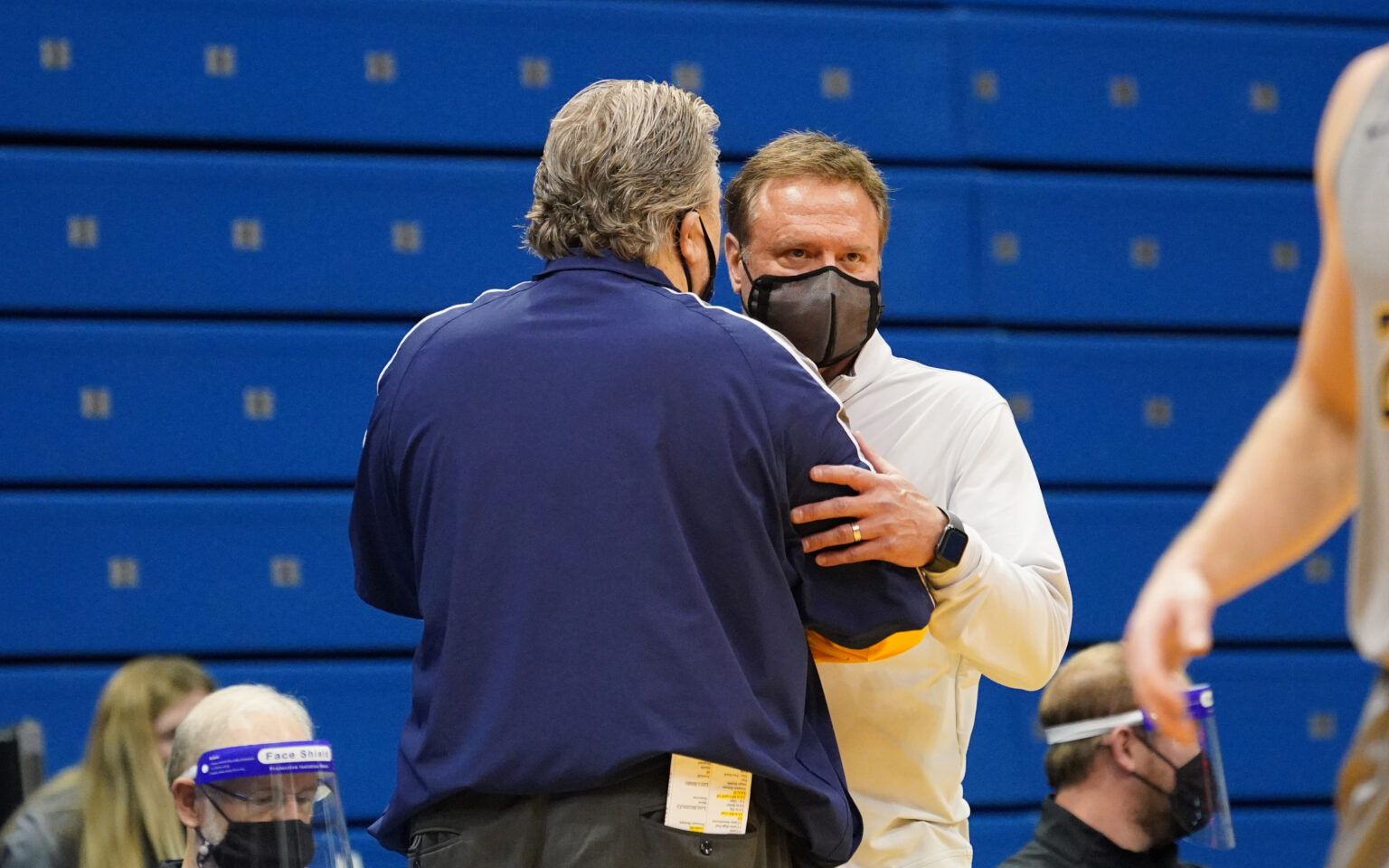 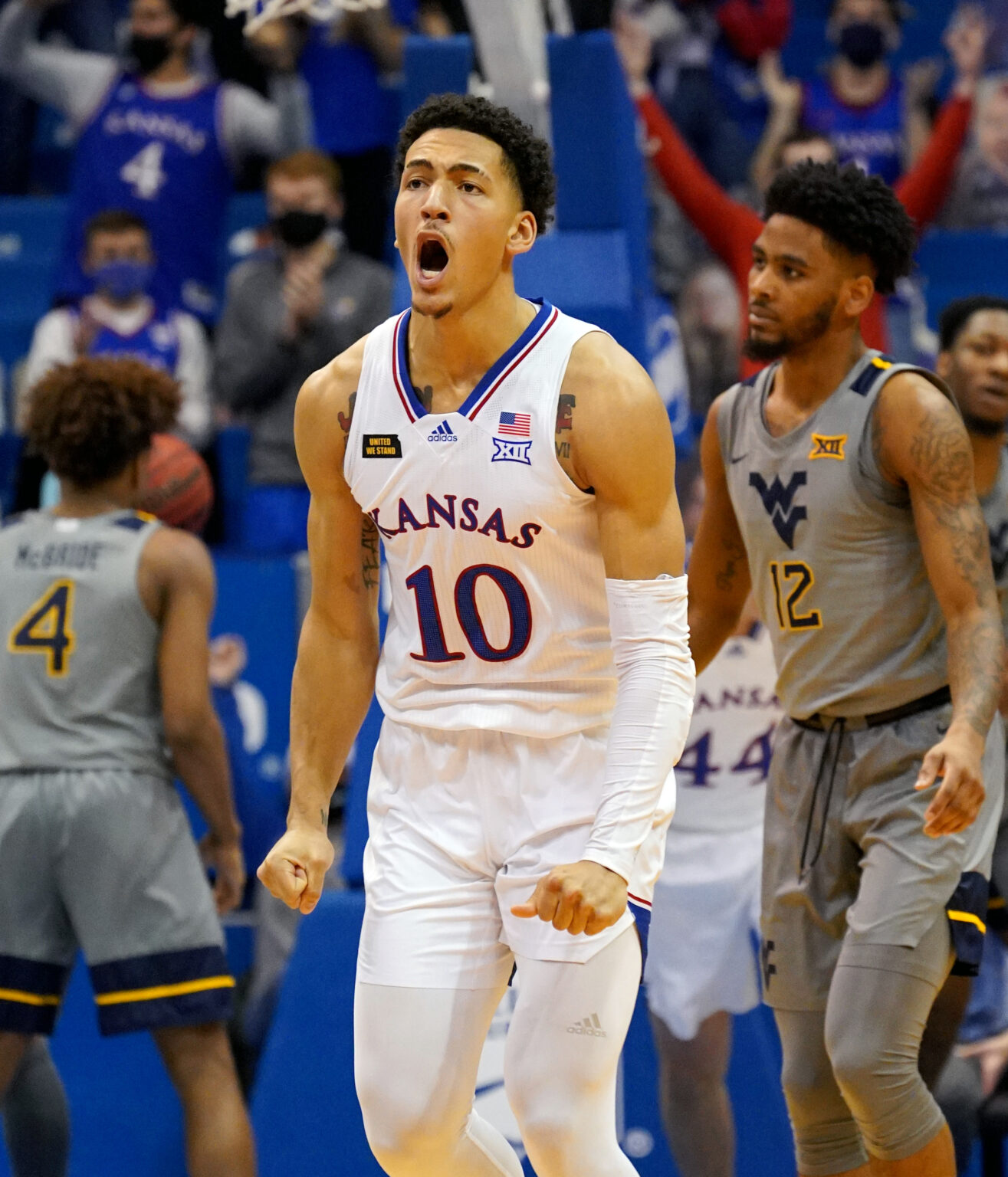 MORGANTOWN, W.Va. — Trailing by a point at halftime, Kansas buried West Virginia under an avalanche of second half 3-pointers to run away from the Mountaineers, 79-65 at Allen Fieldhouse in a matchup of top ten teams.

All five Jayhawk starters scored in double digits, led by Christian Braun’s 22-point effort. Kansas went 9-of-19 from beyond the arc in the second half.

“They shot it very consistently. Everybody shot it from the perimeter. And then when they missed, they rebounded the long misses and we didn’t,” said WVU head coach Bob Huggins.

“They hit big shots when they needed to,” said WVU sophomore guard Deuce McBride. “We were coming down with empty possessions and they were coming down and were hitting 3’s and getting more than one shot per possession. They were finishing better than we were.”

West Virginia fell behind by 9 points at the first media timeout as the Jayhawks went an on 8-0 run, giving them a 13-4 lead.

Sean McNeil however almost singlehandedly kept West Virginia in the game in the first 10 minutes. He scored 13 of WVU’s first 15 points. McNeil connected on 3-pointers on consecutive possessions as part of an 8-2 run. WVU pulled within 3 at 15-12.

Kansas would build a 7-point lead twice late in the half and the Jayhawks led 35-28 with 2:40 to play before halftime. But McNeil would hit a pair of triples as part of an 8-0 run to close the frame. McNeil was 6-for-6 from beyond the arc in the first half, scoring 20 points. WVU led 36-35 at halftime.

“My body just felt really good going into the game in warmups,” McNeil said. “I saw the first one go in and it was a big confidence builder from there.”

“We thought he could shoot it like that. He shoots it like that in practice,” Huggins said. “What hurt us is that he and Deuce were the only two that made shots.”

In the second half, the Jayhawks clamped down on McNeil and continued to shoot well from 3-point range. Kansas went on an 11-0 run capped by three consecutive triples from Jalen Wilson, giving the Jayhawks a 60-47 lead with 10:40 left to play.

McBride picked up his third foul of the game at the 17:41 mark of the second half with the Mountaineers trailing 42-40. Kansas promptly went on a 15-7 run with McBride on the bench.

“I think I have to do a better job of understanding the game and how it is moving and maybe lay back a little bit defensively if the game is called tight,” McBride said.

Wilson scored 17 points for the Jayhawks (8-1). Marcus Garrett added 15 points, Ochai Agbaji chipped in with 11 and David McCormack scored 10. KU starters accounted for 75 of their 79 points.

Although Kansas won the rebounding battle by just 3 [40-37], the Jayhawks had 25 second chance points while the Mountaineers mustered just 14.

West Virginia (7-2) is scheduled to return to action January 2 at Oklahoma. Next Tuesday’s originally scheduled matchup vs. Buffalo has been canceled due to COVID protocols in the Buffalo program.