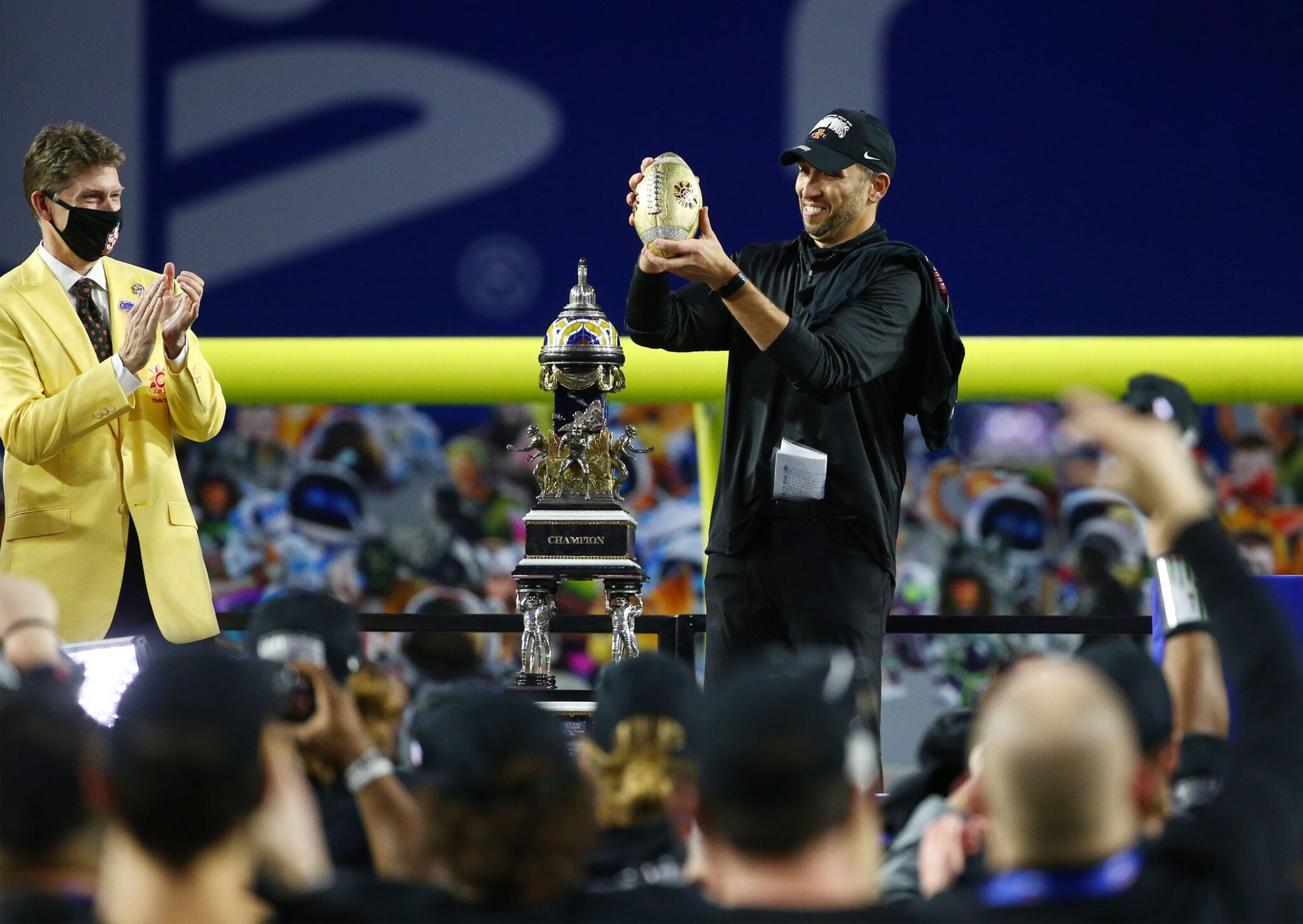 CHARLESTON, W.Va. — While the college football champion for this season has yet to be determined, the Big 12 season is over and it’s time for our final edition of the Snapshot.

The Big 12 ends the year as the only Power 5 conference to go undefeated (5-0) in bowls, but in this Covid-19 impacted season in which more players opted out than ever and there were no minimum requirements for bowl eligibility, what do conference bowl records really mean?

For example, while the Big 12 was going 5-0 in bowls, the ACC was 0-6, but had two teams — half of the four-team field — in the college football playoffs, while the Big 12 didn’t have a representative this year.

Does that mean that the Big 12 was stronger than the ACC this year?  In a season in which multiple Power 5 conferences didn’t play non-conference games, are bowl games a good way to measure conference strength?  Would Oklahoma — or Iowa State for that matter — given Alabama a better game than Notre Dame in the national semifinals?

Those are questions to ponder after one of the most unique college football seasons ever.  But the strong bowl showing by the Big 12 comes a year after the conference was just 1-5 in bowls and league went 0-3 against the Sun Belt to open this season (Arkansas State winning at K-St, Louisiana def. Iowa State and KU losing to CCU).

Here’s a look at our final Big 12 Snapshot of the season.  In case you joined us late, our weekly Big 12 Snapshot used a fantasy football-style tier format, not conference standings or power ratings.

To say that Oklahoma turned it around after a slow start this season would be a huge understatement.  The Sooners have now won six straight Big 12 championships and ended the season with an eight-game winning streak.  Not bad after two early-season conference losses had OU reeling.  While it’s true that Florida didn’t have all of their weapons on hand in the Cotton Bowl, Oklahoma’s domination of that game cannot be ignored.  Expect Spencer Rattler and Company to be ranked in the top five of the pre-season polls next season.  With Rattler now in command of the OU offense, two Sooners’ quarterbacks have already entered the transfer portal, but highly touted freshman Caleb Williams is expected to be more than capable to back him up in the fall.

Why stop when you are having fun?  Iowa State, which came within an eyelash of taking down Oklahoma in the Big 12 title game and thrashed Oregon in the Fiesta Bowl, appears to be setting up for another solid season in 2021. All-Conference first team quarterback Brock Purdy has already announced he’s coming back for his senior year and tight end Chase Allen says he will also return, taking advantage of the extra year of eligibility allowed by the NCAA due to Covid-19.  ISU’s defensive leader, linebacker Mike Rose also indicated after the Fiesta Bowl if his plans to bypass the draft for now and return for his senior campaign.

Texas wouldn’t be Texas without a few surprises.  Literally just days after athletic director Chris Del Conte announced that Tom Herman would be returning as head coach after a very public effort to bring Urban Meyer to Austin failed, Del Conte fired Herman and hired Alabama offensive coordinator Steve Sarkisian.  While it’s fun in a way to watch the Longhorns struggle to get it right in terms of college football, you can’t help but admire the lengths to which they strive to reach their stated goals; annually compete for Big 12 championships and a berth in the College Football Playoffs.  How big a job does Sark have on his hands at Texas after he leaves Alabama after the national title game with Ohio State?  He will have to reestablish Texas as a premier destination for in-state talent that’s been going elsewhere for years now.  But it’s not as if the cupboard is exactly bare, Texas went 7-3 this year, in a season in which they won five of their final six games, took Oklahoma to four overtimes before losing and dominated Colorado in the Alamo Bowl.  Texas will be ranked again in the pre-season and underestimating the Longhorns will be a mistake.

It always seems a little difficult to try and figure out what to think about Oklahoma State at the end of the season.  OSU finished 8-3 and ended the campaign with a solid 37-34 win over Miami in the Cheez-It Bowl, but you can’t help feeling like it was an opportunity missed.  Mike Gundy as a head coach seems as if he always does just enough to not get fired, but never quite enough to satisfy the OSU fanbase.  Consider, before the season, Oklahoma State had arguably the best defense in the Big 12 returning and Chuba Hubbard, Tylan Wallace and Spencer Sanders back on offense.  Sanders struggled early, Hubbard never really got on track and Wallace made dubious history becoming amongst the first players ever to opt out at halftime of a bowl game.  While Gundy continues to own WVU as a player and a coach, he continues to struggle against OU and a berth in the Big 12 title game is seemingly a bridge too far for him.  That said, expect Oklahoma State to be in the top half of the Big 12 again next season, but will likely continue to fill the role of always being the bridesmaid and never the bride.

TCU’s season came to an end early as Covid-19 issues within the Horned Frogs’ program caused the cancellation of the Texas Bowl with their old SWC foe Arkansas.  It was a tough break in a tough season for Gary Patterson’s Frogs, who were heading into the bowl season as winners of five of their last six regular season games, with a loss at WVU the only defeat in that stretch.  TCU on paper looks to carry a lot of momentum into next season, as the entire starting offensive unit returns and potentially as many as eight defensive starters will also be back.  One key element to that defense that won’t be returning however, is safety Tre’von Moehrig, who will bypass his senior year and enter the draft, where he’s expected to be selected somewhere in the final third of the first round.

WVU’s come from behind win against Army ended the season at 6-4 and in sixth place in the final Big 12 standings — right about where we expected the Mountaineers to be this season.  There’s plenty of WVU-specific content elsewhere on the site (don’t forget to check the story archives), so we won’t dive too deeply into it here.  Among the areas that were improved in Neal Brown’s second season were the rushing game and the defense overall, especially against the pass.  But  penalties, the total number of them and the ones that came at critical times, remain an issue.  Also, winning away from Morgantown was a riddle WVU failed to solve, losing all four road games (all in conference play) this season.

As Kansas State looks back at a season in which they once stood 4-1 with wins over Oklahoma and at TCU before a season-ending five-game losing streak that began at WVU, a pair of key Wildcats have made their decisions about their futures at KSU.  On the Sunday before Christmas, quarterback Skylar Thompson gave K-State fans an early present, announcing he will will return in 2021.  Thompson, who has 30 career starts, was injured against Texas Tech in early October and is currently recovering after surgery on his throwing shoulder.  Meanwhile, linebacker Elijah Sullivan is forgoing his additional year of eligibility to enter the draft, where he’s projected as a safety.  K-State may already have a replacement for Sullivan, as Utah State transfer Eric Munoz committed to K-State two weeks ago.

There are a lot of changes happening at Baylor in the wake of the Bears’ just completed 2-7, Covid-19 impacted season.  The biggest news involves BU’s previously best known player, quarterback Charlie Brewer.  After being Baylor’s starter for the last four years, Brewer is leaving Waco as a grad transfer to Utah.

Brewer will be remembered at Baylor for leading the Bears from a 1-11 season in 2017 to the Sugar Bowl the following year.  However, the Baylor offense has struggled for the last year and a half and a separation will probably be best for both parties.  But that’s just part of the story.  While new coach Dave Aranda rebuilt the defense practically from scratch this season, the offense never got on track.  Baylor has cut ties to former OC Larry Fedora after just one season and Passing Game Coordinator Jorge Munoz is also out.  The search at Baylor for a new offensive coordinator is ongoing.

At Texas Tech, Matt Wells has also been busy retooling his offensive staff since the season ended.  But unlike Baylor, Wells has already fired an OC and hired a new one.  David Yost is out and former TCU offensive coordinator Sonny Cumbie is coming home to run the Red Raiders’ offense.  Cumbie is a former TTU quarterback who led them to a Holiday Bowl win in 2004 (over No. 4 Cal featuring Aaron Rodgers and Marshawn Lynch).  Cumbie will now try and energize TTU’s quarterbacks on hand, veterans like Alan Bowman and freshman Behren Morton.  Well has also been busy working the transfer portal to bolster his defense.  Former Florida Gators’ linebacker Jesiah Pierre has transferred to TTU, along with defensive backs Malik Dunlap of N.C. State and Marquis Waters from Duke.

While Chris Del Conte at Texas just proved what votes of confidence are really worth when he fired Tom Herman just days after saying he’d be back next season, you get the feeling the rules (and expectations) are quite a bit different at Kansas in this regard.  KU’s Les Miles got a vote of support from his AD Jeff Long just prior to the holidays after the Jayhawks’ winless campaign.  Kansas’ season opening loss to Coastal Carolina was a precursor of things to come; CCU turned out to be really good and in losing all eight of its Big 12 games, KU showed little improvement.  Consider this; if Kansas’ season finale against Texas hadn’t been cancelled by Covid-19, KU was very likely to become the first college football program in history to lose 100 games in a 10-year span.