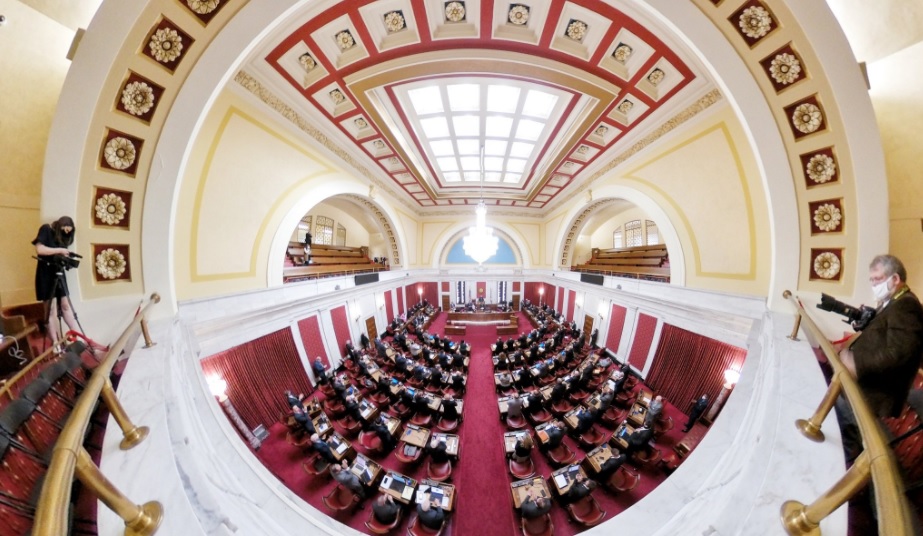 CHARLESTON, W.Va. — The impact of the ongoing pandemic was evident as members of the House of Delegates and state Senate conducted their opening day business at the state capitol Wednesday.

Lawmakers wore masks during their floor sessions and a handful of delegates sat in the galleries above the House floor because of social distancing concerns.

Delegates approved several measures focused on the public’s interaction with the legislature during the session. The GOP majority rejected motions from Democrats to further clamp down on mask wearing and the posting of committee agendas online.

The legislature did accomplish its regular opening day business including the official elections of Senator Craig Blair, R-Berkeley, as the new president of the Senate and Del. Roger Hanshaw, R-Clay, for his second two-year term as House speaker.

“That will help us in a goal of bringing over the next 10 years over 400,000 people moving into the state of West Virginia,” Blair said.

Blair, who began his legislative career in the House of Delegates before winning a Senate seat and then becoming the Senate Finance Committee chair, said much has been accomplished in the Senate during the last six years of GOP majority but more must be done.

“Now is the time to press down on the accelerator, speed up the opportunities of change for the state of West Virginia and I can’t stress this enough–we will do this together,” Blair said.

Both Blair and Hanshaw will lead super majorities in the Senate and House but both reached out to the small Democratic caucuses Wednesday.

“I appreciate the confidence and trust you’ve placed in me but I ask today that we place that same level of trust and confidence in each other because we are assembled in extraordinary times,” Hanshaw said.

Hanshaw said although the last 10 months have been far more than anyone could have imagined, West Virginia has shined and can continue to shine. He said in the eye of the storm there is opportunity.

He said it’s up to the legislature to make that choice an easy one.

“I for one am ready to commit this legislature to helping us put West Virginia on a path to make it easier to simply choose West Virginia,” Hanshaw said.

House and Senate members will return for the first day of the 60-day session at noon on Feb. 10.

The House did receive the resignation letter of Del. Derrick Evans during Wednesday’s floor session. Evans resigned before taking his first vote after being arrested last Friday following his alleged actions at the U.S. Capitol during the Jan. 6 attack. He was elected as a delegate from Wayne County last November.