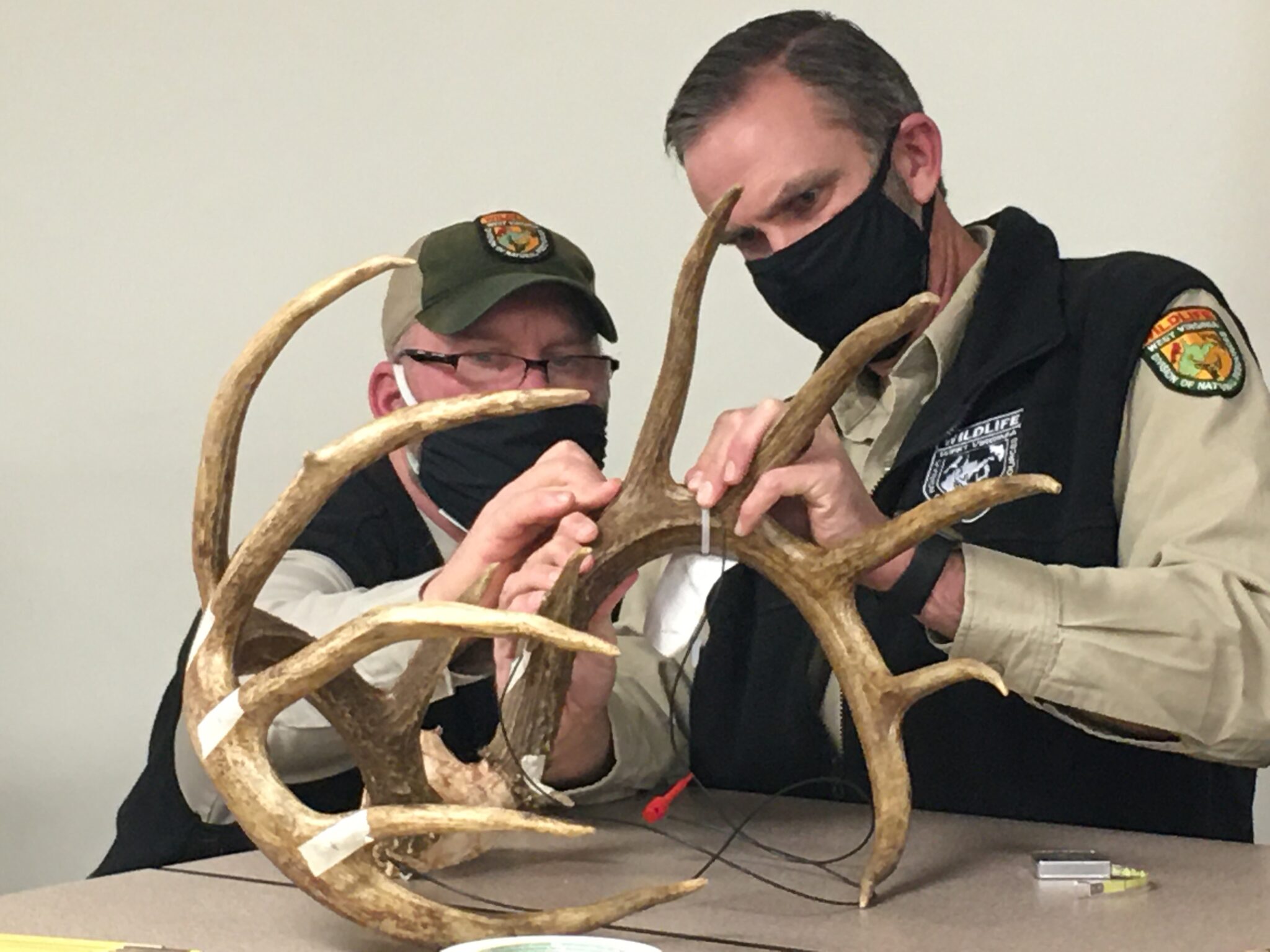 SOUTH CHARLESTON, W.Va. — A dozen or so people spread out across a conference room at the headquarters of the West Virginia Division of Natural Resources office Wednesday. Those assembled were socially distanced, masked up, and the tension in the air was thick, but fear of a pandemic wasn’t on the mind of this group. The assembly stared at the front of the room where three Division of Natural Resources biologists, certified scorers for Pope and Young, carefully examined the largest set of antlers most in the room had ever seen.

Biologists Todd Dowdy and Eric Richmond along with the agency’s Assistant Chief for Game Management Gary Foster performed a “panel score” on the buck killed in early November by Jody Dalton of Princeton. The only one in the quiet room who didn’t seem nervous was Dalton.

“I knew it was going to be close, real close,” said Dalton.

Dalton shot the arrow which brought down the bruising whitetail in Wyoming County. Watching three men run a tape measure over the rack created no worries for him.

When finally finished Dowdy read the tale of the tape.

Along with mass and length, symmetry is one of the most desirable attributes in a buck’s antlers for the purpose of scoring. Most who looked at Dalton’s buck were immediately mesmerized by the symmetrical features. In fact, just over an inch of the 3 6/8ths inches of deductions were from a single “sticker” point on one of the tines.

“That one sticker was over an inch. I’ve never seen one that symmetrical,” Dalton. “He’s a perfect deer.”

Dowdy and Richmond agreed. Richmond was part of the panel score for the Scyphers buck in 2014.

“I thought that record would stand for quite a while and not necessarily because some other deer couldn’t grow antlers bigger, just the symmetry that rack possessed. I didn’t think another deer could do that, but this one proved me wrong and is even more symmetrical than the previous record,” Richmond said.

It was Dowdy’s first time scoring a state record.

“It’s a unique experience. When I first saw the buck I didn’t’ think he was as big as he was. The symmetry and the tine length and main beam length is what’s really impressive,” Dowdy said.

Another unusual fact about Dalton’s buck was the young age. All three members of the panel agreed the buck was probably 3 1/2 or 4 1/2 years old judging by the jawbone. They agreed he was certainly no older, but it was difficult to tell. Many of the larger bucks killed in southern West Virginia are normally well over five years in age.

Also on hand to watch the scoring was Dalton’s dad, who was the one who actually saw the deer.

“I couldn’t believe it. When he told me he thought he’d killed a state record, I had to go see this deer,” he laughed.

“He found it and we both walked up it together and the first thing we did at the same time was look straight up and say, ‘Thank you Lord,'” Jody explained.

Governor Jim Justice joined the group in a Zoom conference to offer his congratulations on the whopper whitetail and the new state record.

The rack is now off to the taxidermist. Jody faces a decision now of the style of mount he’ll pick to preserve the trophy. A lifelong hunter, Jody expected to be back in the woods next fall. He was less certain he’d be able to top his 2020 buck.

“I love to hunt. My boys and I just love it. We’ll see about deer hunting next year,” he laughed.