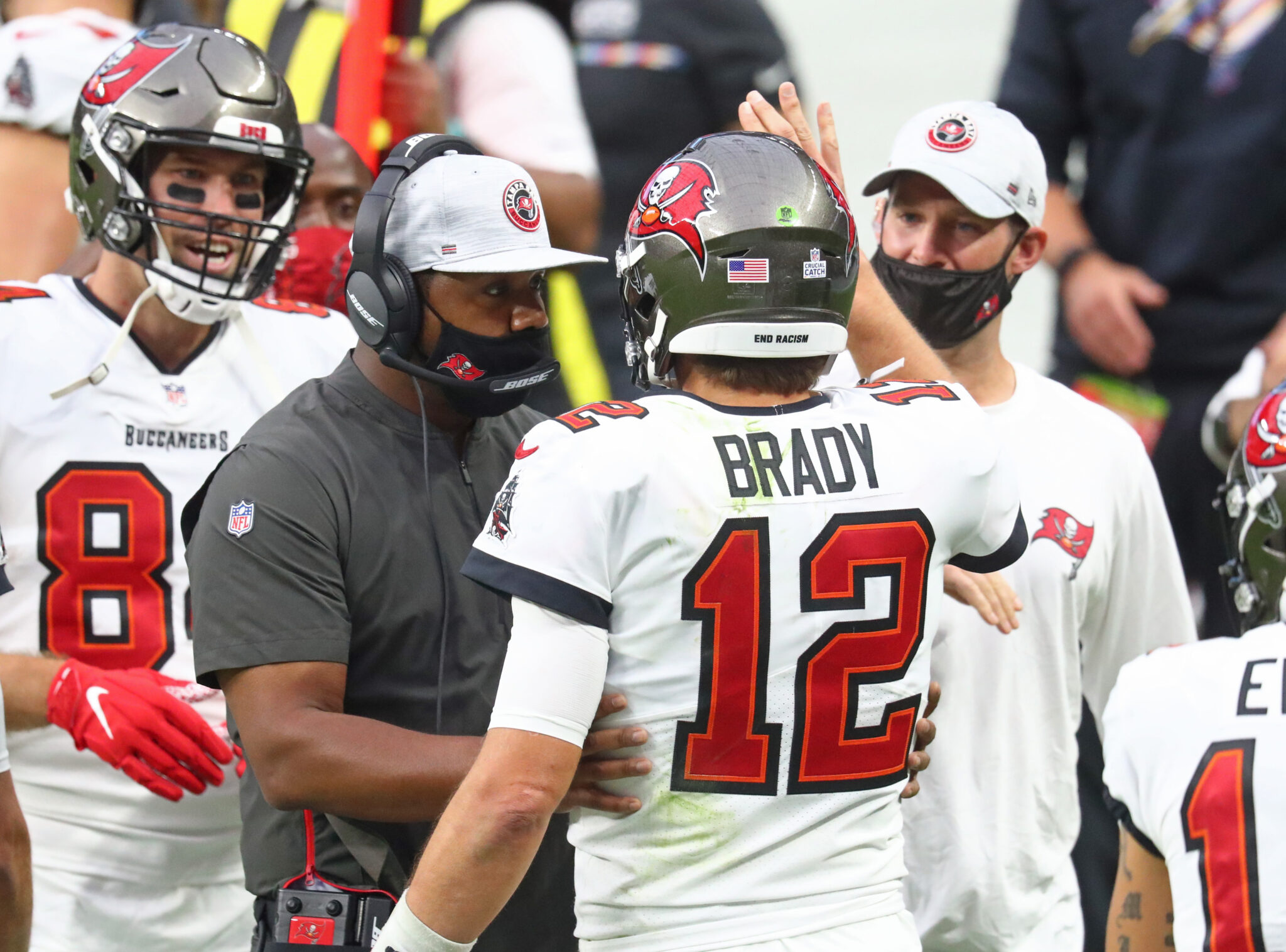 MORGANTOWN, W.Va. — Byron Leftwich needed a timeout. After a successful playing career at Marshall University and a ten-year run as an NFL quarterback, Leftwich left the game of football for three years from 2013-2015.

Recharged and admittedly bored at times in retirement, Leftwich began phase two of his football life in 2016. On Sunday, he will engineer the Tampa Bay offense in Super Bowl LV.

“I am not really shocked that we are in this game, to be honest with you,” Leftwich said Monday. “I think we had a good football team last year. We had a young football team that was learning how to win. I remember telling my offensive staff at the end of last year and looking at all of the free agents that were coming out, I remember telling myself, ‘If I am a free agent quarterback, I am coming to Tampa’.”

The most notable free agent was the greatest to play the position. After two decades with the New England Patriots, Tom Brady left Foxboro for south Florida. In his second season as the Bucs’ offensive coordinator, Leftwich found himself coaching the six-time Super Bowl champion.

“It is exciting to work with the guy that they call the best ever to play his position. He has been in every situation. And I get an opportunity to work with him after he has already done twenty years of this. It has been kind of fun to just learn from him and him to learn from me.

“He wanted to be coached hard. He wants you to let him know when he is not doing the right things. That’s the easy part for me because you want to help. You want to put the player in the best position to have success. They are never afraid of hard coaching.”

After losing three of four in November, the Bucs have won six in a row, scoring thirty points or more in each game.

“It was tough early because we never got the opportunity to go through a lot of these things with no offseason. But when we got halfway through the year, I think we learned with each other. Our ability to learn each other has put us in position to play in this game.”

Replacing a legend in Huntington

Two decades before ascending to his coordinator spot with the Bucs, Leftwich faced the daunting task of replacing Chad Pennington at Marshall University. In three seasons as the starting signal caller for the Herd, Leftwich racked up 12,090 yards of total offense, ranking second on the school’s all-time list behind Pennington.

“I learned a lot of football at Marshall and I also had Chad Pennington there. So I had the guy that they were calling the best quarterback in college football. I had the opportunity to learn from and learn how to play the position.

“It was really before college football starting going really fast and holding cards up to get the plays in. We had to learn it differently and the game was played differently during those times even though at Marshall we were a pass-oriented system. We had to know what all the spots were on defense. We couldn’t just go fast.”

Leftwich was the No. 7 pick in the 2003 NFL Draft and spent four seasons with the Jacksonville Jaguars. He would also suit up for the Falcons, Buccaneers and Steelers before stepping away from the game in 2013.

In retirement, Leftwich quickly picked up a new, albeit a seasonal hobby while living near his hometown of Washington D.C.

“I was enjoying time being a civilian. Initially it is fun and it is great because you have been in the meeting room for I don’t know how many years. Initially it was great because I played golf. I had a 7:45 tee time every morning. But what happened is, the winter would come. Being in D.C., there was no more golf to play. That’s when I kind of got bored.

“I was playing everyday Monday through Thursday, just trying to work on my game. I really turned golf into football. I didn’t have structure other than golf. So I approached golf like I would approach the game of football. I got pretty good at it. But then I decided to get into coaching. Coaching and the game of golf do not go together.”

Back in the game under Bruce Arians

In 2016, Leftwich returned to the game of football. He worked for Bruce Arians as a coaching intern with the Arizona Cardinals. Leftwich earned promotions in consecutive years, to quarterbacks coach in 2017 and offensive coordinator in 2018. Arians was the Steelers offensive coordinator with Leftwich was backing up Ben Roethlisberger in Pittsburgh.

“B.A. always wanted me to coach. It was just something I wasn’t ready to do. I needed to get away. I needed to see what the rest of the world is about.

“Me and B.A. would talk. I would tell him what I saw on TV because I really had no understanding of what he was doing from a game-planning standpoint.”

Arians resigned after the 2017 season in Arizona but when he returned to the game as the Bucs’ head coach in 2019, he hired Leftwich as his offensive coordinator. Tampa owns the second-best passing offense in the NFL, falling in line with Arians’ philosophy simply summed up by the phrase, ‘No risk it, no biscuit’.

“This is an aggressive league. This league is about scoring. This isn’t the same league where you ran the ball and got two yards here on first down. This is a different league and the slogan fits perfectly with the way football is being played now.”

Leftwich won a Super Bowl ring with the Steelers in 2009 when they defeated the Cardinals at Raymond James Stadium in Tampa. He regrets that his players won’t receive the full Super Bowl game week hoopla in this COVID season.

“I wish our guys could have the real experience of what it really is. To have the opportunity to go to two Super Bowls, the experience is different this year. We’re doing this through video, so it is different than it has been before. But for these guys to get an opportunity to have this version of it, I would love for it to have been different circumstances so that they can truly experience it the way I experienced it. This is a unique thing. It is a thing you should enjoy.”