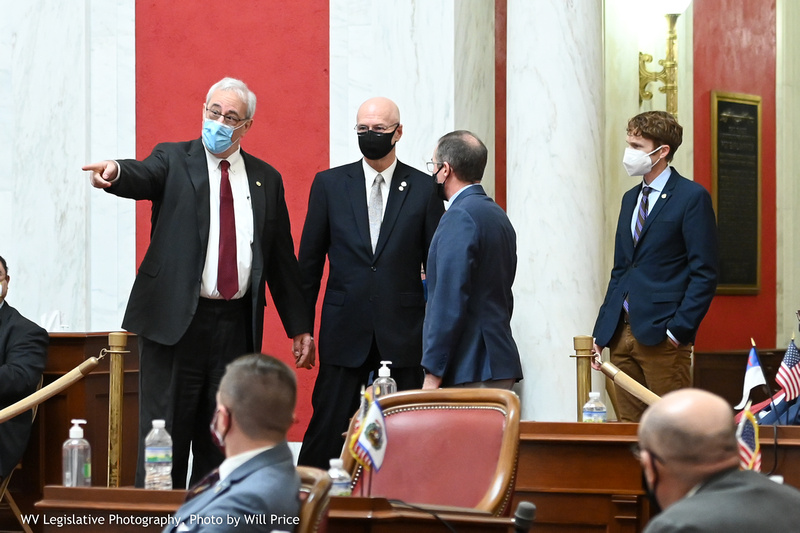 Covid-19 is likely to dominate West Virginia’s coming legislative session, both in policy and practicality.

Senators this week said they will consider a range of bills relating to the pandemic, including how the pandemic would affect business liability and the extent of the governor’s emergency powers.

And senators are preparing to take precautions that could include limiting public access and participating in committee meetings from their own offices.

And, unfortunately, uncertainty will also be a factor.

“We don’t know what future lies in front of us whether the covid situation gets better or worse,” said Senate President Craig Blair, R-Berkeley.

Those were recurring themes during a Legislative Lookahead preview sponsored by the West Virginia Press Association in partnership with AARP WV and WVU Today.

Similar legislative preview events over the course of this week will include members of the House of Delegates and other state policymakers. The regular session is set to begin next week, Feb. 10.

The West Virginia Capitol Complex remains open for official business, but it’s been closed for non-business visits. So public access to watch legislative decisions up close and interact with lawmakers is in question.

He described livestreaming Senate floor sessions, as well as committee meetings. The Senate’s system has a video archive, too. And he said the Senate aims to distribute videos highlighting current initiatives.

The Senate is likely to experiment with lawmakers participating in committee meetings online from their own offices, he said.

“Otherwise, there will be limited access into the building because of the covid concerns. We want to make sure members and staff and those who would be in the building are protected to the best of our ability,” Blair said.

He added, “That shouldn’t slow the process of being able to get our work done.”

Baldwin, D-Greenbrier, recognized the challenge of communicating with the public during the pandemic. He described having virtual office hours and public availability sessions on a regular basis, although the timing is still being worked out.

And with accessibility at the Capitol limited, Baldwin worried attempts at influence will be even greater after-hours. Democrats will introduce a bill aimed at limiting opportunities for lobbyists to take lawmakers to dinner, Baldwin said.

“Sometimes this place can be a bubble for 60 days,” Baldwin said. “I’m afraid that may be even more the case this year with covid.”

Several more pieces of legislation are lined up in reaction to the pandemic.

Both Republicans and Democrats said the social distancing demands of the pandemic have illustrated the need to strengthen broadband capacity in West Virginia.

Baldwin and Lindsay said the pandemic shows the continued need to focus on healthcare, too. Lindsay described increasing a Medicaid match for healthcare providers to make sure their finances are strong enough to continue to operate.

The Senate Judiciary Committee will probably examine liability for employers during the pandemic, said Weld, the vice-chairman of that committee. Weld said such legislation would aim to curb frivolous lawsuits — although defining what constitutes a frivolous lawsuit is one likely area of debate.

More focus may be on the governor’s emergency powers.

Gov. Jim Justice’s orders issued over nearly a year now have been based on his own State of Emergency declaration on March 16 and a section of state code describing the governor’s emergency powers.

In other words, Justice has been citing the large-scale threat of the virus to restrict people’s movements.

Lawmakers will look at aspects of those powers, including how long they really should last and what powers should be more defined, Weld said.

“How can we improve upon the governors’ powers? How can we put more of those powers into the Legislature’s hands, just to balance the power of state government?” he said.

Both Republican and Democratic leaders gave the governor relatively high marks for his handling of the pandemic.

Baldwin said he would have preferred earlier legislative involvement in issues such as oversight of the state’s use of millions of dollars of federal relief.

But, Baldwin said, “Overall we think the governor has been very responsive.”

“One of the things I can say is when I’ve had complaints from constituents and I’ve voiced them to the Governor’s Office, normally they reacted within 24 hours and addressed those issues,” Blair said.

News
Family of 4 injured, 2 dogs dead after car goes over interstate wall in Charleston
It happened at the I-77/I-64 split Sunday morning.
By MetroNews Staff
News
Education focus groups to be held statewide by AFT-WV, WVEA
First listening session to be held in Morgantown this Tuesday.
By Carrie Hodousek
News
State capitol Christmas trees come from Monongalia County tree farm
Trees will be focus of Joyful Night celebration.
By Mike Nolting
News
DNR officer reflects on week one of buck season
Up to 300,000 hunters hit Mountain State woods during the first week.
By Mike Nolting