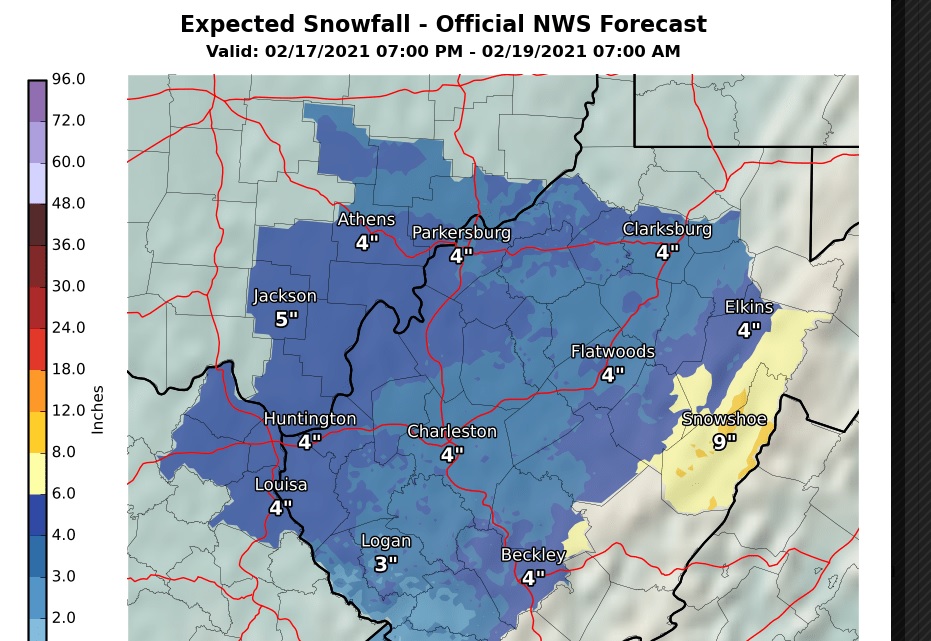 Snowfall in the forecast for approaching storm. (NWS/Charleston)

CHARLESTON, W.Va. — The National Weather Service has issued a Winter Storm Watch for most all of West Virginia for Wednesday night through Friday morning, marking the third winter storm to hit the state in a week.

“It’s a mixture of rain and snow Wednesday night, probably changing to all snow. We could see a few inches across most of the state,” National Weather Service Meteorologist Robert Hart said Tuesday. “Thursday it gets messy as snow turns back to rain and then we get a few more inches on the back side of the system from Thursday night into Friday morning.”

According to an NWS map posted Tuesday afternoon, Charleston, Huntington, Beckley, Flatwoods, Parkersburg, Clarksburg and Elkins are expected to receive a total of four inches of snow over the two days. Accumulation is expected to be a little less in the southern coalfields but higher in the eastern mountains. Snowshoe in Pocahontas County could see up to nine inches of snow.

Here we go again! A Winter Storm Watch has been issued for our entire forecast area from Wednesday night through Friday morning with significant amounts of snow and ice accumulations possible. Monitor https://t.co/8nFnoPKk1T for more details and updates.#wvwx #ohwx #kywx #vawx pic.twitter.com/FXMbDV16I5

The wintry mix will create additional challenges for power crews that are working to restore power from back-to-back ice storms in western counties. Hart said it was a significant ice buildup.

“It’s anywhere from a quarter to a half-inch in ice and that has really devastated a lot of the trees in the area,” he said.

The state is also seeing an arctic air mass.

“That blows all of those trees to the ground,” Hart said.

Tuesday night lows were expected to range from the upper single digits to the lower teens throughout most of West Virginia. Hart said that will be make it difficult for residents without power.

“That’s a pretty big concern for those who have no heat source,” he said.