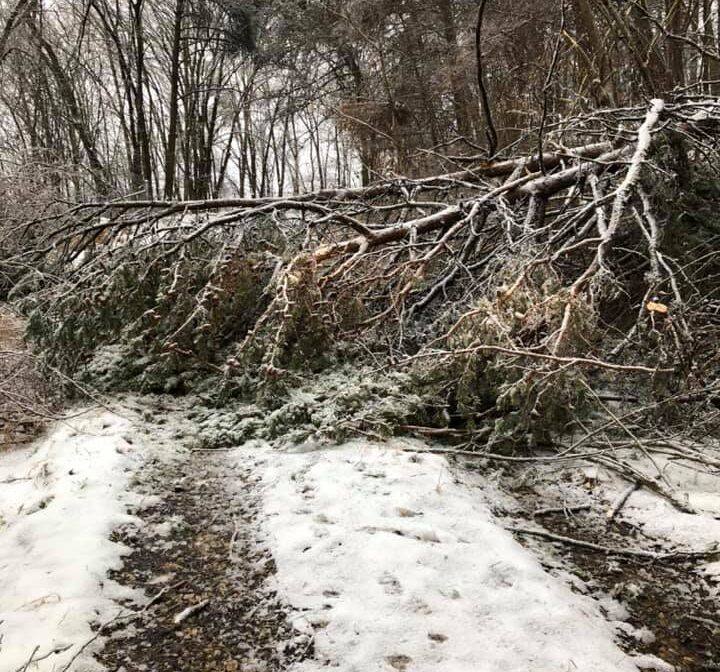 Accessing broken power lines in remote locations is made more difficult by widespread tree damage across the storm zone areas.

CHARLESTON, W.Va. — Appalachian Power Company is dealing with major damages from a

n a week’s time in West Virginia. The storm struck largely the same areas Monday night which were hit last Wednesday night, although the damage from the second storm appeared to be much more severe as crews began to assess damages Tuesday morning.

The company’s call center in Hurricane, which handles reports from customers to identify outages, was operating on a backup generator Monday night into Tuesday.

About 1,500 linemen were part of the restoration effort, but due to the wide scope of the damage and the difficulty reaching some remote locations, Moye said it would not be a quick fix. Crews worked to repair the easiest fixes on Tuesday while assessment teams investigated and planned the repairs for the tougher jobs. According to Moye, it’s part of a strict process.

“We need to find out where the new damage is, what materials and resources it’s going to take to get it repaired. You’ve got to know where the damage is and what you need to fix it before you can get it fixed,” he explained on MetroNews Talkline.

Outage levels by early Tuesday afternoon showed Cabell County with 66 percent of customers out of service. Jackson County had 33 percent of the county out. Percentages of customers without power include 64 percent in Lincoln County, 31 percent in Mason County, 61 percent in Putnam County, and 79 percent in Wayne County. Adding to the difficulty was accessibility with widespread debris and broken trees down all over the region.

Mother Nature showed no mercy, following up the ice storm with an arctic freeze which was expected to plunge temperatures into the teens and single digits Tuesday night into Wednesday in the area of the major damage.

“The crews in place will be out making major repairs on large outages where we know we have problems, that includes some transmission facilities and substations, but we can’t provide the expectation of when power will be restored because we don’t know where that damage is.. We may have a line that serves a whole lot of customers–but on that line we may have one problem–or we may have 50 problems,” he said.

Until the assessment is complete, Moye said nobody can estimate the full restoration of power. Until then, residents are relying on each other and finding comfort and heat any way they can.