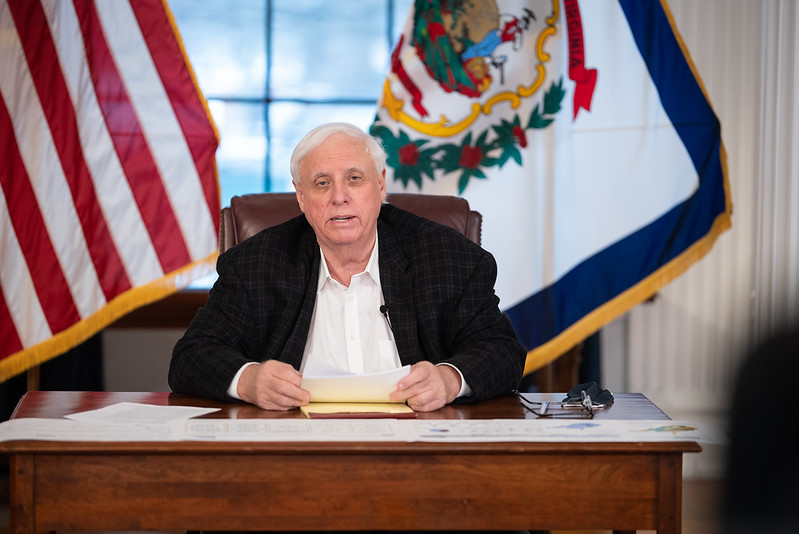 Gov. Jim Justice announced the loosening of some covid-19 restrictions just as the House of Delegates as passing two bills that would give lawmakers more oversight of the governor’s health, safety and financial actions in emergencies.

Justice announced he will recommend K-8 students return to classrooms full time, although that will require steps by school boards too. And the governor said he will order loosened restrictions on social gatherings, restaurants and bars, grocery stores and retail outlets and, in cooperation with the SSAC, sports attendance.

He did not lower a statewide face coverings mandate in public places.

“What we want to do is adjust, be fluid, pivot — all the different things that I’ve told you over and over and over.”

Justice said his decision was based on steadily improving coronavirus numbers across West Virginia. He said that does not mean residents should abandon all precautions though.

“It’s not a time to be panic. It’s a time to be cautious,” he said, adding that the state might have to reinstitute restrictions if there is another coronavirus surge.

He said all the changes except for the one involving schools would go into effect at midnight. He characterized his school guidance as a recommendation that would need further action by the state school system.

“Hopefully we can remove every single one of these limitations in the next couple of weeks,” Justice said.

His announcement to loosen those restrictions came during a regular briefing shortly after 10:30 a.m.

A little after 11 a.m., the House of Delegates convened and unanimously passed two bills that would limit the governor’s authority.

House Bill 2014 asserts the Legislature’s role of approving expenditures even in situations like the recent rounds of federal relief.  The bill cites a $100 million limit for the governor’s spending authority during emergencies without legislative approval.

West Virginia received $1.25 billion in federal relief last spring, and the governor has held millions of that in reserve. Now the state is anticipating another round of federal relief, under consideration by Congress.

“The legislation before us is a statement to that effect: We are trying to ensure a balance of power,” Delegate Jonathan Pinson, R-Mason, said of the first bill during a House floor session today.

On the bill establishing a time limit for emergency declarations, an ongoing debate over whether it requires further clarification continued.

Delegate Pat McGeehan, R-Hancock, had proposed an amendment that would have specified that it applies to the current emergency. It simply said, “Upon passage, any state of emergency or state of preparedness currently in effect are subject to the provisions of this section.”

The amendment initially passed in committee but then was stripped out, with committee leaders saying the bill’s original language would already apply. McGeehan proposed it again on the House floor on Thursday, but it was narrowly defeated.

Today, he and others pushed that issue again.

“Do the restrictions apply to the current state of emergency if this bill becomes law?” McGeehan asked House Judiciary Chairman Moore Capito.

“Without a doubt you believe that for certain on the record?”

Capito, R-Kanawha, responded, “I believe that.”

Delegate Shawn Fluharty, D-Ohio, pushed that lack of clarification could leave too much wiggle room.

“We have an obligation here to the constitution and the process. We are mere nameplates while we’re down here,” Fluharty said.

“What we’re passing now is mere symbolism, so we can act like we did something. We decided to cower in fear to the executive branch and not stand up for our own power here in the Legislature.”

After the bill wound up passing 97-0, Fluharty made a fairly standard motion to make the bill effective from passage. Because of the debate over the amendment, the motion carried more symbolic weight in this instance.

That motion was approved unanimously too, officially making the bill effective if it passes the Senate and is signed by the governor.