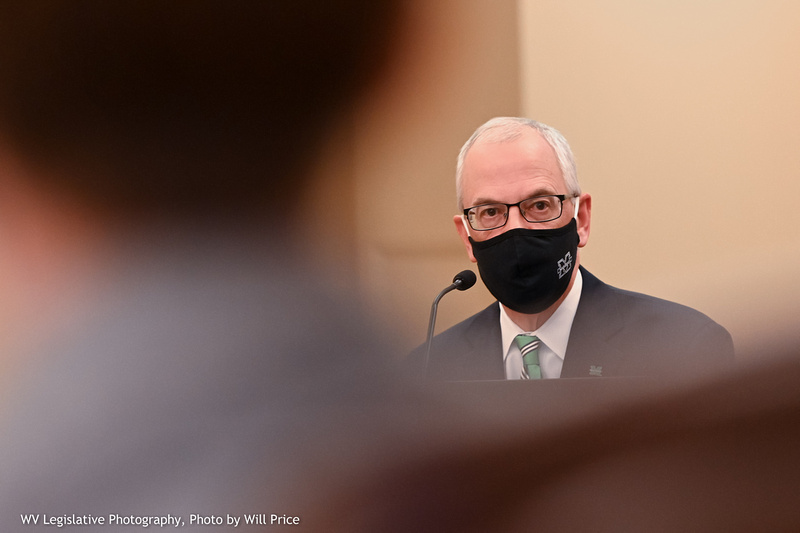 Marshall University says President Jerome Gilbert was merely describing a timeline when he told senators that higher education leaders were asked to keep quiet about a Promise Scholarship funding shortfall until after last fall’s election.

Gilbert made the remark on Thursday while describing Marshall’s use of reserves to make up for a state funding gap. A pandemic-related cash crunch meant the state couldn’t pass along Promise funds for student scholars so Marshall and West Virginia universities made up the difference themselves.

The scholarship pays $4,750 in tuition and fees for qualifying West Virginia students to attend college. For many years, West Virginia families have described Promise as a lifeline to higher education.

Marshall and West Virginia University officials were asking lawmakers to approve compensation for about $5 million combined from last spring.

“We were asked not to really discuss that until after the election, which we did. We decided we would stay quiet about it,” Gilbert told state Senator Robert Plymale, D-Wayne, during a Senate budget hearing.

“So we have sat and waited and now we have come forward to let you know this happened. And we are requesting that we get those state funds that we promised the students that we had to take out of our reserves to actually fund their scholarships.”

No one at the Senate hearing asked Gilbert to clarify how the election would play a role. The comment drew attention on social media, and other higher education officials privately said today that they were surprised by how Gilbert cast his remarks.

“Our legislative contacts advised that nothing could be done about requesting restoration of those Promise funds until the legislature met — either in special or regular session,” Painter stated.

“There was no special session due to the election, so the FY22 budget request yesterday was our best opportunity to bring it up.”

Asked then for further clarification on how the electoral cycle would relate to a special session, Painter again pointed generally to the timeline.

“I believe that the original discussion was that there wouldn’t be a special session scheduled before the election. And, of course, in the end, there weren’t any special sessions.”

She said the guidance came from officials with the Higher Education Policy Commission — although she didn’t specify who — along with Bill Burdette, the university’s legislative liaison.

Lawmakers on the ballot do often become singularly-focused as an election approaches.

But the main reason the Legislature has not met until the regular session started last week has been the coronavirus pandemic.

Many lawmakers pushed last summer to call themselves in for special session to provide more oversight of the governor’s health, safety and financial decisions. But not enough signed on in the Senate, and the governor was publicly resistant.

Over the past months, Gov. Jim Justice has frequently trumped the state’s relatively stable financial condition, describing it as nothing less than a miracle up against the pandemic.

“Even though it’s been a tough time since March, all along I felt like if we could just get through this past year, it would be a tremendous accomplishment. But these numbers are an absolute miracle,” Justice said when the state concluded the fiscal year reporting millions of surplus.

Justice, who was up for re-election in November, never did describe a Promise funding shortfall.

And was little to no public discussion of a special session that would have dealt with higher education funding.

Finally, after lawmakers return this week, the Promise Scholarship shortfall that affected Marshall and WVU was revealed.

“We were delivered a big blow last spring, the spring of 2020, when we failed to receive $1.13 million in Promise funds for our Marshall students,” Gilbert told senators.

West Virginia University officials said during the same budget hearing that the Promise shortfall there was $2.4 million. Bethany College also was affected, with a total shortfall of $5.65 million overall.

The situation arose during the statewide shutdown and resulting economic fallout.

“So, come March, any outstanding balances that there were to institutions couldn’t be paid because there was no money that came in,”  higher education chancellor Sarah Armstrong Tucker explained to delegates today.

“But to your knowledge, they are going to be made whole,” Boggs, D-Braxton, prompted Tucker.

“I’m not certain of that, no,” Tucker responded.

The chancellor alluded to earlier brainstorming sessions: “We went through a series of rabbit holes about that at the end of the year.”

One, she said, would have been using federal CARES Act money to reimburse the colleges. But that was ruled out because the relief money is not supposed to be used to offset lost revenue. “So the Governor’s Office could not take that money from CARES and provide it to backfill the Promise.”

“Past that,” she said, “the only body that is able to decide whether or not a supplement can come is this one. So that’s really a decision for you all to make.”

Marshall and WVU made it clear this week that they are asking lawmakers to do so.

Speaking today on MetroNews’ “Talkline,” WVU Vice President Rob Alsop described the same discussions that Tucker had cited. With those options bearing no fruit, Alsop said he’d asked, “Well, when’s the next time the Legislature will be in town? Will they be called in for a special session?”

But there was no plan at the time for lawmakers to convene.

Asked more specifically about Gilbert’s description of the election timing, Alsop said that wasn’t the way the issue was presented to WVU.

“Our discussion was talking about timing of when do we raise this issue for when the Legislature can grant us relief. It was more on, when’s the next time they’re going to be in town?”