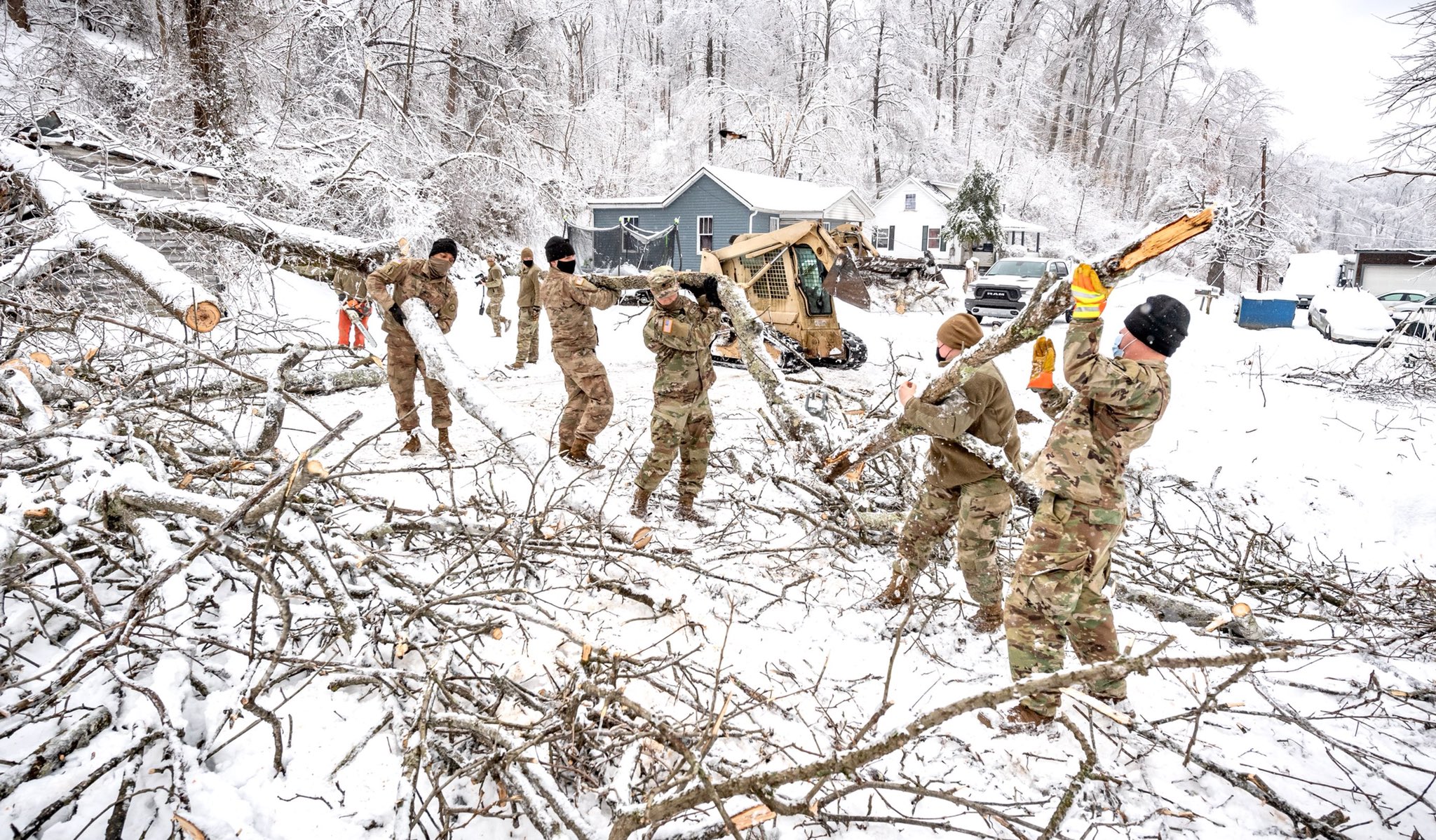 WAYNE, W.Va. — Challenges continued to mount Saturday for thousands of workers trying to gain the upper hand on power outages in a six-county region in West Virginia hard hit in separate ice storms during the past two weeks.

The power company has more than 3,200 workers on the job. Many of them are staying in portable housing at the Huntington Mall parking lot which has turned into a small city.

Crews have found more than 1,500 locations where repairs are required, 550 power poles that need replaced and roughly 2,400 spans of wire that need to be put back up.

Repair work is difficult and more problems are continually identified, but progress is being made each day,” Appalachian Power said in Saturday afternoon’s report. “As an example, workers have replaced the same pole in Wayne County three times because more trees keep falling on it.”

Our Soldiers were on the ground in Wayne Co. today providing additional support to local & state authorities to clear roads/debris for WVians in need. The photos of the downed trees/snow & ice from the storm don’t do justice to what parts of our state are going through. pic.twitter.com/o9rKa0qYPt

Ice storms hit on Feb. 11 and then again on Feb. 15. It’s believed more than 6,000 customers have been without power since the initial storm.

Appalachian Power still hopes to have all service restored to customers in Putnam, Lincoln, Mason and Jackson counties along with the Milton area in Cabell County by 10 p.m. Monday. The estimate is 10 p.m. Tuesday for Wayne and Cabell counties.

The Guard has three chainsaw teams clearing roads and property and other teams using Light Medium Tactical Vehicles to make welfare checks on some cutoff residents in Wayne County.

Troopers are also helping with clearing efforts and welfare checks.

Various crews from the state Division of Highways began working on the storm-impacted areas shortly after the first ice storm.

There’s still clean-up work to be done in Districts 1 and 2.

Here’s a look at a tree down in Putnam County and one of our crew members working in Mason County this week. 🌲 ❄️ pic.twitter.com/q35uzy7iOJ

·         At the height of the storm, 100 circuits were out. Today only nine circuits remain out and four of those are at the Wayne station.

·         At total of 12 stations were out of service at one point. Repairs were made and service has since been restored at all but the Wayne station.

·         The Wayne station will be out of service until at least Sunday due to repairs to a dozen structures that carry transmission lines to the station. Progress is slower here.

·         Helicopters and drones are proving valuable in assessing damage and making repairs.

·         With storm restoration work now complete in Virginia, and other parts of West Virginia, additional workers are moving into the Huntington area today.

·         A total of 27 bunkhouses are now in place at the Huntington Mall to house the additional workers. Due to COVID-19 precautions, they will be filled only at half capacity, or 15 workers per trailer.

·         Crews are focused on outages that affect large numbers of customers.

·         In the Milton area of Cabell County, Putnam, Lincoln, Mason, and Jackson counties, most customers without power should have service restored by 10 p.m. Monday, Feb. 22.

·         In Wayne and the remainder of Cabell County, most customers without power should have service restored by 10 p.m., Tuesday, Feb. 23.

·         These are estimates for overall completion by county.

·         Thousands of customers will have service restored each day as work is ongoing.

·         In isolated individual cases and outages with extensive damage, restoration may extend beyond these estimates.