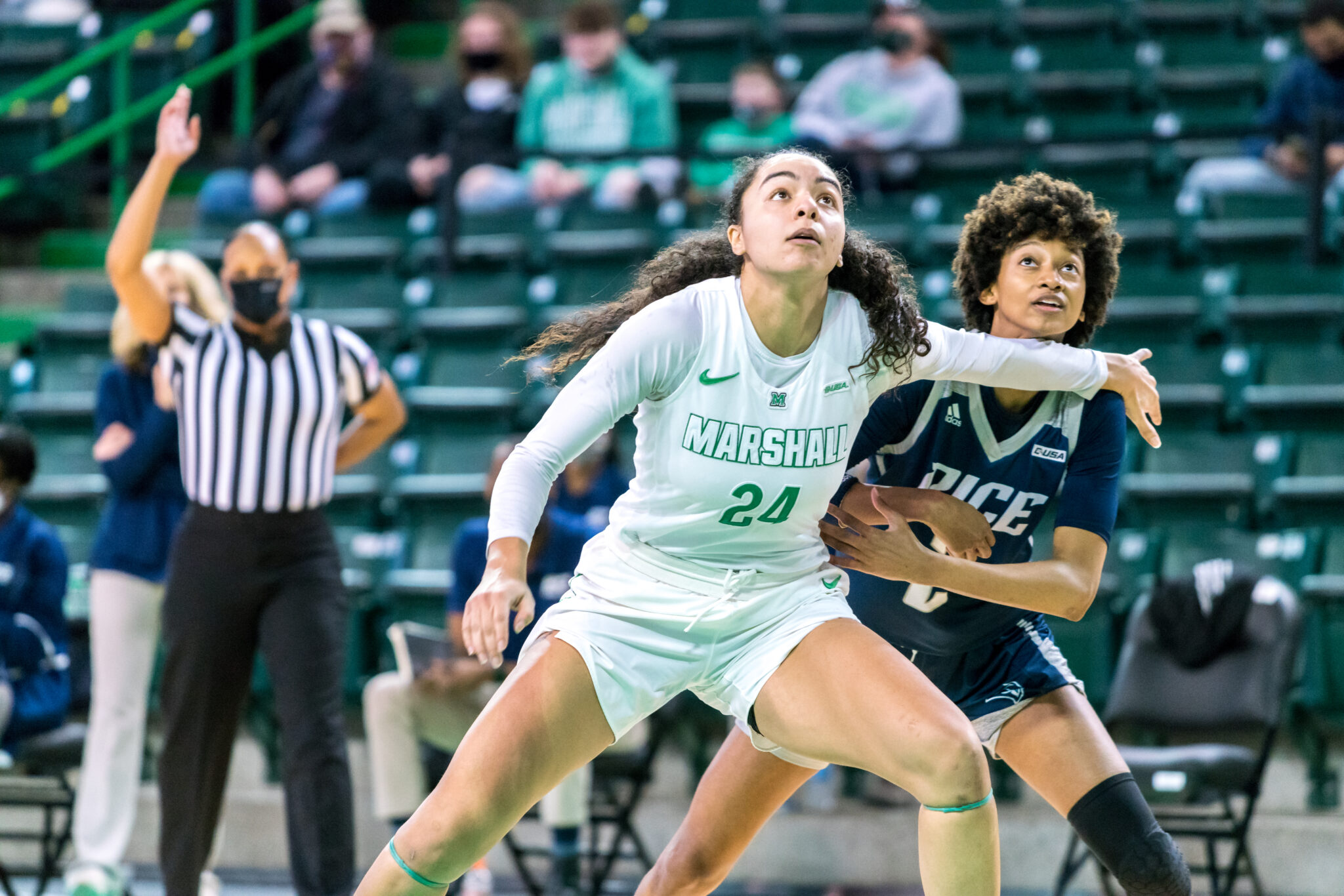 HUNTINGTON, W. Va.  – What a Senior Day for Kristen Mayo and Taylor Pearson, what a rebound by Savannah Wheeler and what a turnaround by the Marshall women’s basketball team.

Mayo and Pearson are the two seniors on the 2020-21 Thundering Herd and experienced one of the most memorable Senior Day wins in program history, a 68-56 stunner over Rice in a Sunday matinee at the Cam Henderson Center. Wheeler got the comeback award with a 25-point effort after just netting seven in Saturday’s 64-48 loss. The turnaround-win against the Conference USA leader speaks volumes.

Marshall, which played from way behind Saturday and behind quite a bit Sunday, entered the fourth period down 52-45. India Bellamy scored for the Lady Owls at 9:19 for a 54-45 lead. Lauren Schwartz hit a basket for the visitors at 4:11 for a 56-50 lead.

“They were receiving votes in the Top 25. I have a lot of respect for that program,” Marshall coach Tony Kemper said. “They haven’t lost much in our league the last three years. I know it feels good for our team they they came into Huntington and it didn’t go the way they thought it was going to go. They haven’t done that against a lot of teams. They allow us to hang around. We were really tough at the end.”

Wheeler led Marshall with a game-high 25 points to go with four assists and no turnovers. Kennedi Colclough added 14 points and Mayo and Pearson 10 each. Wheeler went 6-of-6 and Mayo 4-of-4 on free throws in the fourth period as the Owls had to foul.

“At the end of the day, a win is a win,” Mayo said. “I don’t really care how it happened. It was big at the end to get some stops. Rice is a really good team. As soon as the fourth quarter started, our mindset was this game is definitely winnable.”

Nancy Mulkey, 6-foot-9 center for the Owls, led her team with 15 points and nine rebounds. Schwartz contributed 14 points and Sydne Wiggins 12. Last in the league in assist-to-turnover ratio, Rice notched assists on just eight baskets and had 18 turnovers.

Marshall connected on 10-of-20 three-point tries and the Owls went just 3-of-15, their lowest percentage of the season. Mayo and Pearson were honored prior to tip-off.

“I thought we were really tough at the end,” Kemper said. “They had us in a really bad way (nine nine starting the fourth period). We got tons of stops as the end. I thought we were finally physical without fouling and I’ve been on our team about that. Rice is really physical, too. Rebounding, it wasn’t like they weren’t going for them. We were just a little quicker to the ball.”

Marshall returns to action next weekend against North Texas in Denton, Texas. Game times are 7:30 p.m. Friday and 4:30 p.m. Saturday.