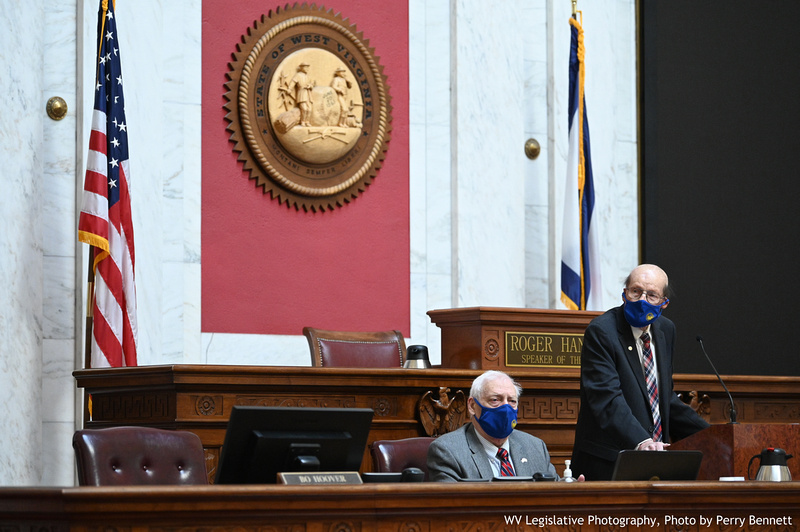 The House of Delegates will consider an exception to the Aboveground Storage Tank Act that passed in the wake of the 2014 water crisis in the Kanawha Valley.

Their upcoming decision will weigh the economics of oil and gas operators against the health risks of communities. And against that backdrop are questions about whether the public has had its chance for a say-so on this bill.

After debate of more than an hour Tuesday morning, the House Energy Committee passed House Bill 2598, which would exempt some tanks. If the bill passes, the act would no longer apply to small tanks having capacity of 210 barrels or less even if they are located in a “zone of critical concern,” which refers to their proximity to local water intakes.

Advocates for the bill said it’s necessary as oil markets have gotten tougher while the costs continue to maintain a standard for state inspection. Under this view, the tanks are barely profitable but owners have to upgrade them. Operators have expressed concern they will either have to plug the well or go out of business.

“Some of these wells are in a negative posture in terms of revenue versus costs,” said Phil Reale, a lobbyist for The Gas and Oil Association of West Virginia, who testified before the committee.

“People are paying thousands upon thousands of dollars to comply with this act.”

Reale suggested that not providing some financial relief could exacerbate another problem, abandoned wells.

“I can tell you there have been a few wells that have been abandoned. This would be one factor. Frankly, the cost of compliance for some may become prohibitive in today’s market,” he said.  “The hope would be that the state doesn’t inherit more abandoned wells.”

Critics pointed to possible effects on local water supplies and health. That view goes back to the 2014 crisis when up to 300,000 residents had their water supplies affected by a spill of the chemical MCHM from a Freedom Industries facility. Just a couple of months later, lawmakers approved the Aboveground Storage Tank Act.

“Those of us in Kanawha County will never forget what happened in 2014,” said Delegate Kayla Young, D-Kanawha. “I just don’t think there’s anything more important than having clean drinking water.

“I oppose this bill. I don’t think we should be doing anything to potentially make our drinking water less safe.”

The bill would make an exception to the 2014 landmark law. As Delegate Evan Hansen, D-Monongalia, described, it would create new exemptions for tanks closest to and upstream from drinking water intakes.

“This is a bill about keeping drinking water clean and safe for human consumption,” said Hansen, who described receiving hundreds of messages from around the state about the bill.

“There’s a huge interest in this bill, not just in my district but across the state.”

“None have impacted an actual water intake, but we’ve had some that have been a stream above its own critical concern,” Porter responded. “They were able to get booms on streams to prevent any contaminants from getting into the water intake.”

The change could affect smaller, marginal wells with traditional vertical drilling. Regulators said that would apply to about 887 tanks, according to recent figures.

Experts and regulators who testified before delegates said much of what’s normally contained in the tanks is brine, but that’s not all. They also contain oil that has come directly from wells, along with other materials that may sometimes include radioactive substances.

“There is a little bit more in these storage tanks than just brine. I would not go brine my turkey with it,” Porter told delegates.

“Would you agree that some of these pollutants float on the river?” Delegate Hansen asked her.

“Would you brine your Thanksgiving turkey in it?” Hansen asked.

Delegate Ed Evans said the questions about public health should prompt the bill to also be examined by the House Health Committee. His amendment proposing that was voted down, though.

The ramifications to communities should underscore the importance of public participation in the legislative process, said Karan Ireland, a Charleston resident and lobbyist for the Sierra Club. But when Ireland requested a public hearing on the tank bill she heard nothing in response.

“My takeaway is they’re using this opportunity when the public is not able to get to the Capitol and is not able to appear before the committee to do what they’ve always wanted to — which was to exempt an entire industry out of regulation out of the Aboveground Storage Tank Act,” she said.

Ireland said she asked for a public hearing immediately after introduction of the bill and again after it was placed on the Energy agenda. “I didn’t even hear back, and I know I’m not alone in requesting a public hearing,” she said.

“Most of us can remember in 2014 when all of the public was concerned when there was the Freedom Industries chemical leak,” she said. “These are the areas closest to drinking water intakes, and these are tanks that keep the public vulnerable. We need to see that these tanks are being regulated so that we don’t have a repeat of 2014 and that our public health isn’t impacted.”

Precautions from the ongoing coronavirus pandemic prompted a new House guideline for committee chairs to apply their own discretion to requests for public hearings.

In this case, “I did not see the need for a public hearing on House Bill 2598 because of our concerns with COVID,” stated House Energy Chairman Bill Anderson, R-Wood, in response to a MetroNews question about a public hearing.

“I did provide ample time for presentations from those in support of the bill as well as opposed to it, including West Virginia University and the Department of Environmental Protection for the full consideration of the Committee.”

News
FEMA already on the ground in West Virginia
The agency which reacts to disasters is already here this time and coordinating with state emergency officials.
By Chris Lawrence
News
Local Red Cross volunteers spring to action amid Ian's aftermath
Local officials say they will have adequate help if needed this weekend in West Virginia
By Chris Lawrence
News
MetroNews This Morning 9-30-22
Summary of news/sports/weather for West Virginia on Friday, September 30, 2022
By MetroNews Staff
News
Amendment Two: Should the Legislature be able to shift property taxes?
This amendment would allow the Legislature more flexibility to make changes to property taxes.
By Brad McElhinny
View AllHoppy's Commentary