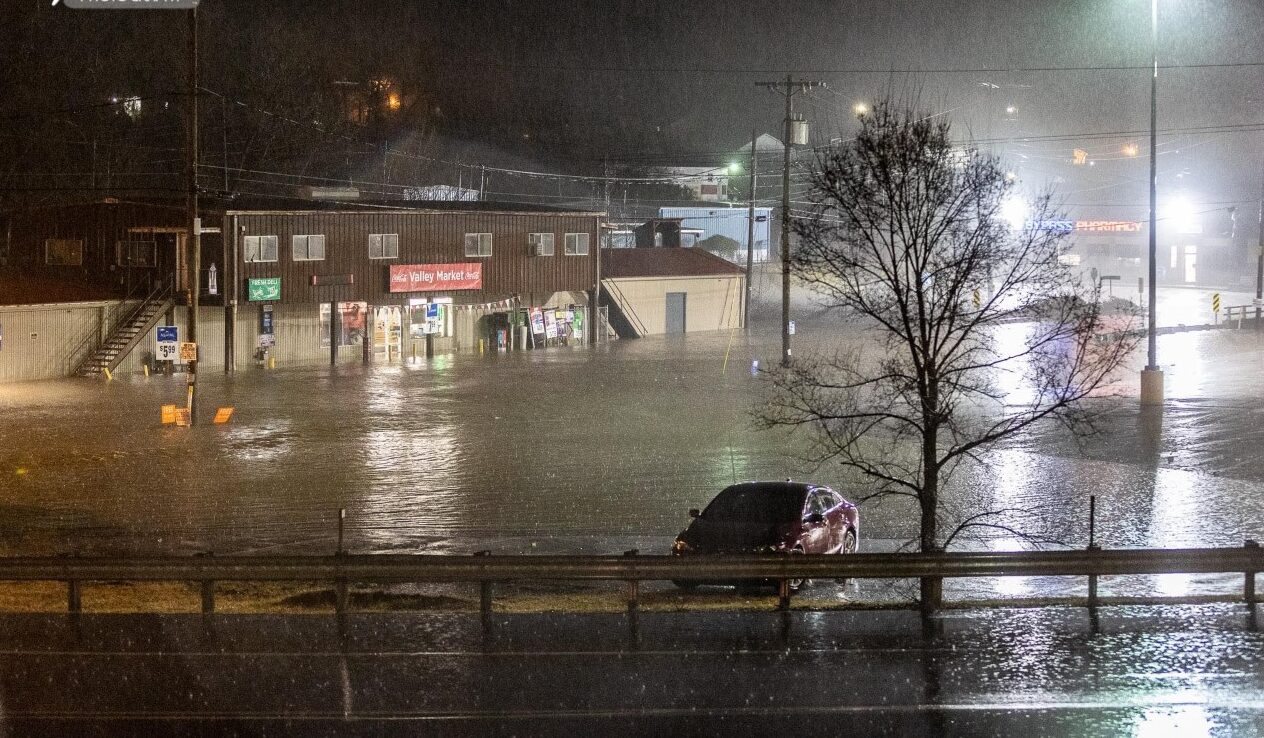 This flooding in Logan is a familiar scene across southern and central West Virginia Monday morning. (Photo/Dylan Vidovich Photography)

Update 6:30 a.m. Monday  The National Weather Service continued flood warnings for central and southern counties in West Virginia until 11 a.m. as a last round of showers moved across the warned area. Dozens of roads in the region are covered with water.

In addition to the river flooding listed below, the National Weather has added the Elk River, which is expected to flood at Queen Shoals and Clay Monday and again on Friday. The forecasted flooding is being called “moderate.”

The Cheat River at Parsons in Tucker County and Rowlesburg in Preston County is expected to flood along with the Greenbrier River at Marlinton in Pocahontas County.

A number of swift water rescues were reported Monday morning including in Boone, Wayne and Kanawha counties.

The National Weather Service is predicting several rivers will crest above flood stage Monday and Tuesday including the Guyandotte River at Branchland in Lincoln County, the Coal River at Tornado in Kanawha County, the Tug Fork River at Williamson and Kermit in Mingo County, the Little Kanawha at Grantsville in Calhoun County and Glenville in Gilmer County, the Tygart Valley at Belington and Philippi in Barbour County and the Ohio River at Point Pleasant in Mason County.

Both Point Pleasant and Williamson have flood walls.

The weather service had most counties under a flood warning with some areas picking up 2 to 4 inches of rain by Sunday night with another 1 to 3 inches possible by mid-morning Monday.

There were high water reports from throughout the state Sunday with most appearing to be in central and western counties.

The weather service’s Sunday night report said river flooding would be considered minor but could get into homes in some areas. In a few cases the high water levels will compare to high water marks in the 1930s.

Gov. Jim Justice placed 50 of the state’s 55 counties under a State of Preparedness Saturday evening.

By Sunday night, some school districts had announced closures, delays or remote schedules for Monday.

The forecast indicated most of the rain would be out of the state by Monday afternoon.