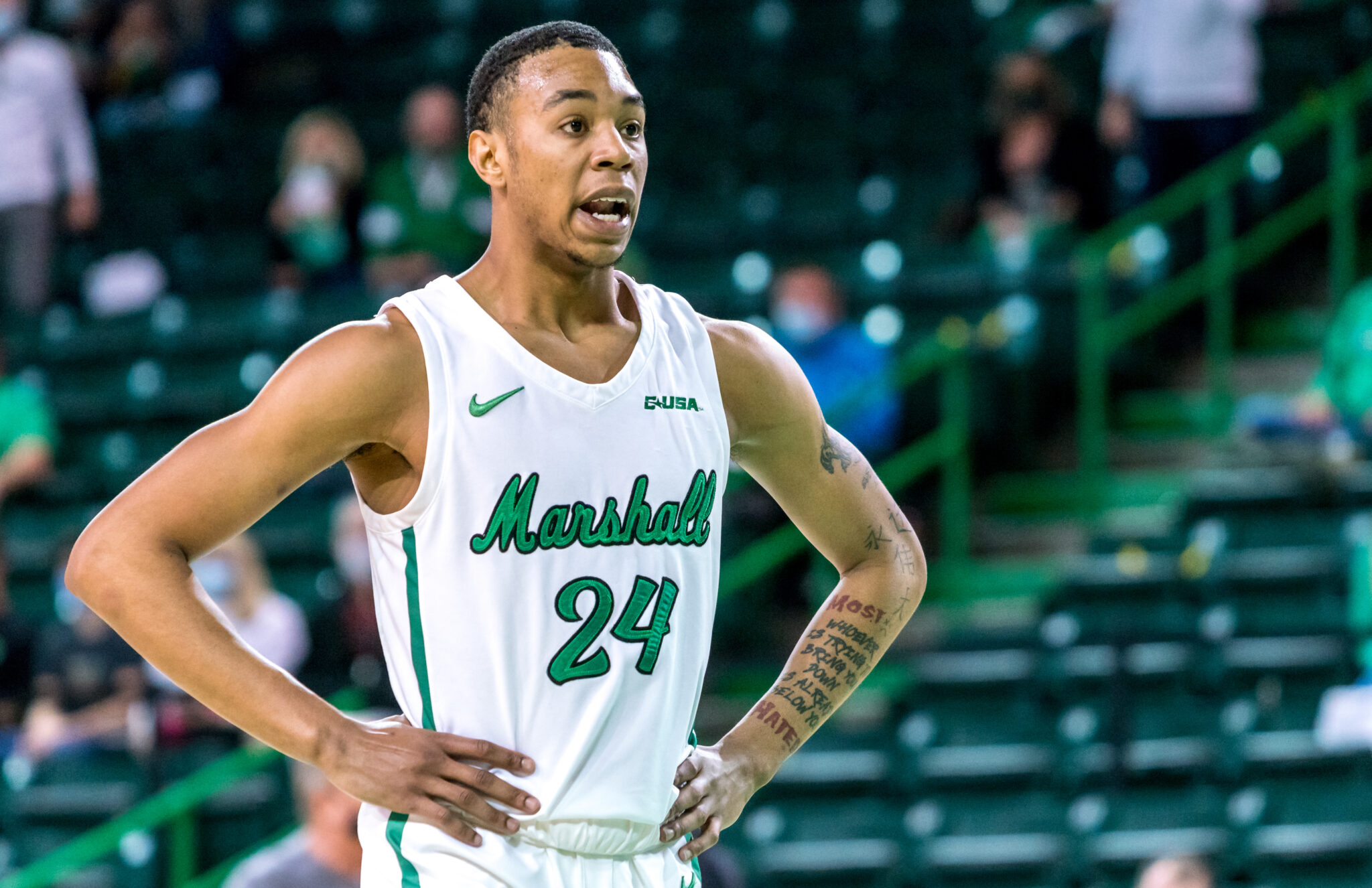 HUNTINGTON, W. Va.  – Taevion Kinsey took the game over midway through the second half to lead Marshall past Charlotte, 75-66, in men’s Conference USA basketball Saturday afternoon at Cam Henderson Center.

Kinsey, junior from Columbus, Ohio, connected on a three-point shot with 11:25 left to put the Thundering Herd ahead to stay 49-46. He added a dunk and basket to push the advantage to 53-46. He added two free throws to end the game and finish with a game-high 23 points and team-high eight rebounds to turn Senior Day into a success for Jarrod West, Darius George and Jannson Williams, Mikel Beyers and Luke Thomas. They were honored in pre-game festivities.

The psyched-up Herd raced to leads of 13-0 and 16-2 before Charlotte righted its ship and made a game of it and pulled even by halftime at 34-34.

“All pumped up,” Herd coach Dan D’Antoni said of the team’s emotions prior to tipoff. “Kind of eased back. Can only stay pumped up so long, have a letdown. We pride ourselves that we play hard, we’re competitive and we’re gonna do it every day. Playing hard is fun. If playing hard is not fun then you’re in the wrong game.”

Andy Taylor added 21 points and Williams 11. The Herd had eights threes in the first half, but only went 1-of-3 in the second, the one by Kinsey. On the flip side, the Herd, which did not shoot a free throw in the first half, went 14-of-14 in the second as it handed Charlotte its eighth straight loss. It’s the first time since Jan. 20, 2018 against UAB in which Marshall made all of its free throws with 10 or more attempts.

“One sets up the other,” D’Antoni said of shooting threes and inside the arc. “An effort to get to the rim by design. Told them we’ve got to get to the basket. We held our picks longer.”

Marshall (15-6, 9-5 C-USA) finished 13-of-21 from the field overall in the second half. The Herd has won six of its last seven and eight of 10 as it prepares to head to the C-USA Tournament starting Tuesday in Frisco, Texas. Marshall’s first game is Wednesday against the winner of Tuesday’s game between Southern Miss/Rice. The starting time will be determined Sunday.

“This helps get us ready,” Kinsey said. “The momentum should help us. Today it was have fun, help the seniors out. Everybody got their part figured out. Now it’s win or go home. Basketball is a game of runs. I’m glad we finished off the second half.”

About the success at the foul line, Kinsey said, “Very clutch. Last year it was one of our weaknesses. They’re free points. We want to get some.”

A year ago, Marshall beat UTEP in the first round (March 11), but then league officials canceled the event the next day due to the Coronavirus and eventual pandemic. The Herd had been scheduled to play Louisiana Tech.

“Unfinished business,” Kinsey said of the trip. “One game, it ends. Didn’t get to finish, show what we really are. This year we will.”

Williams looks forward to the trip to the Lonestar State for a final time.

“It usually clicks for me around this time every season, when it’s time to go to Frisco,” he said. “I feel like we have a chance to complete what we couldn’t complete last year. I loved it (Senior Day). Couldn’t have asked for more (here).  I’m very blessed, very thankful.”

Jordan Shepherd led Charlotte (9-15, 5-11) with 20 points. Jahmir Young had 15, Jared Garcia 14 and Brice Williams 11. Garcia, a freshman, pulled down 11 rebounds for a double-double and career-highs in both categories.

West had two of the Herd’s eight steals to move to No. 2 all-time in C-USA with 252. He passed UTEP’s Randy Culpepper (251). West is 12 away from tying Charlotte’s Eddie Basden for the league record.

Marshall has won eight of the last nine games against Charlotte and leads the overall series 13-7. All league teams will be in Frisco for the C-USA Tournament. Senior Day attendance was 1,145 due to limited seating  created by COVID-19 protocols.