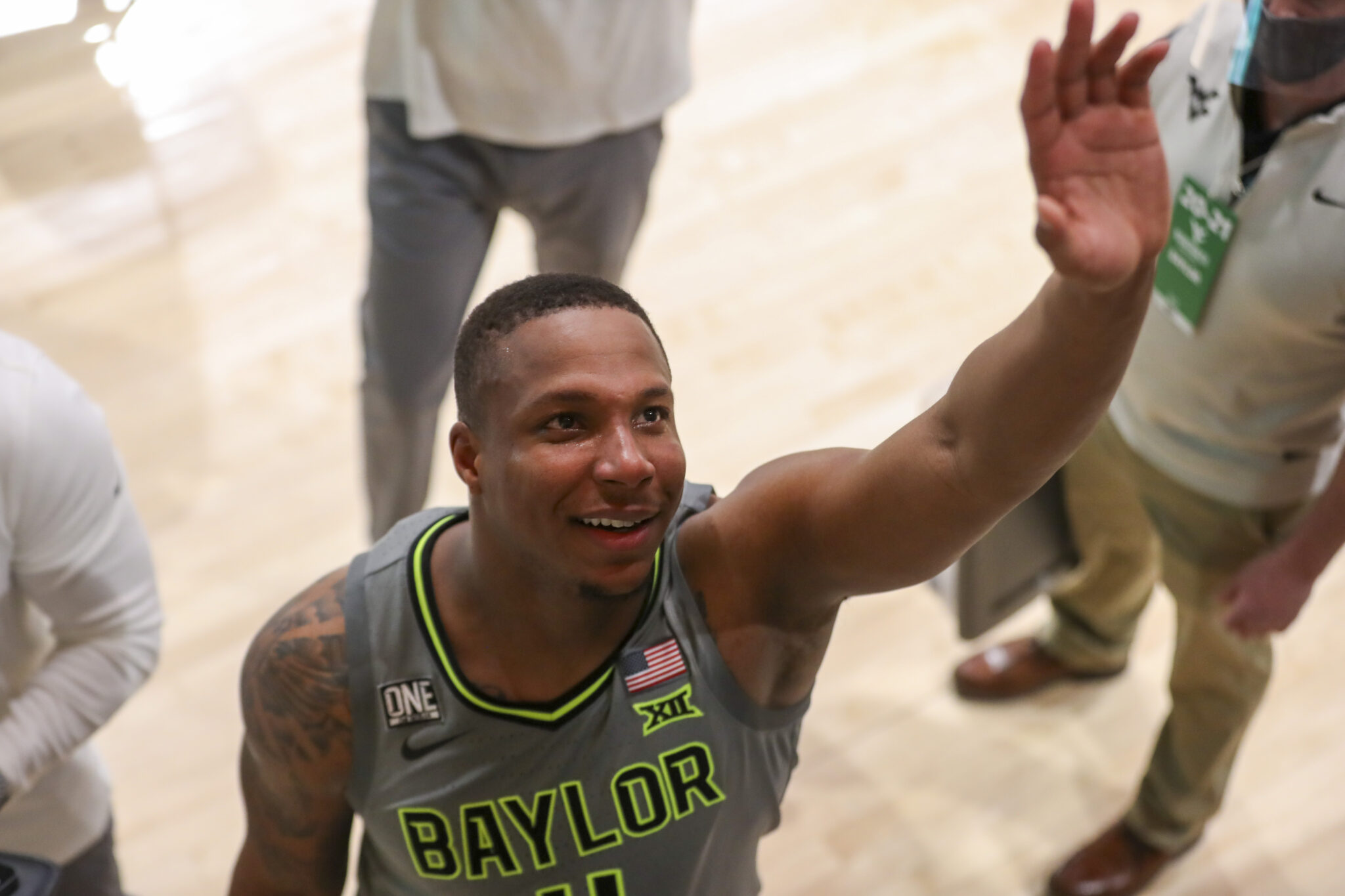 CHARLESTON, W.Va. — After one of the strangest seasons ever in the Big 12, it’s finally time for the conference tournament in Kansas City.

The majority of Big 12 teams featured at least one COVID pause and not all of the teams played the same number of league games.  But somehow we have managed to reach the point where more than half of the teams in the conference have a shot at top four seed in the NCAA tournament, if they can string some wins together this week.

In our final edition of the Snapshot for the Big 12 basketball season, a quick reminder once again that it features a fantasy-style tier format, rather than conventional standings or power rankings.

Baylor sits atop the Snapshot again this week after the Bears seemed to get back on track following a trio of wins against ranked teams; at WVU, vs. Oklahoma State and most recently, against Texas Tech on Sunday night in Waco.  MaCio Teague heads to the Big 12 tourney after a great shooting night against the Red Raiders with 35 points.  Teague went 10-of-11 from outside the arc, while Mark Vital added 10 points and 15 rebounds.  Baylor’s two-point halftime lead grew to as many as 22 points, before the Bears coasted to a 88-73 victory; completing an undefeated home schedule for the first time since 1948.  Baylor has never won a Big 12 Tournament title, but head to Kansas City as the clear favorite.

You have to tip your hat to Oklahoma State for what they have put together the last two weeks.  The OSU Cowboys have emerged from a run of five straight games against ranked teams 4-1, including a pair of wins against Top 10 teams on the road at Oklahoma and Saturday at West Virginia.  The victory at WVU was even more impressive when you consider Oklahoma State was without Cade Cunningham and Isaac Likekele.  Avery Anderson went off against the Mountaineers for 31 points with Cunningham and Likekele sidelined, but that wasn’t totally unexpected.  Anderson has been in double figures eleven times since the calendar flipped to 2021.  Another win over WVU on Thursday in the Big 12 Tournament leaves open the possibility for a conference tourney run that could potentially lead to a two seed in NCAA Tournament when the field is announced next Sunday.

The Longhorns grabbed the third seed in the upcoming Big 12 tourney with a solid 76-64 road win at TCU on Sunday night, closing the book on the league’s regular season games.  Courtney Ramey had 11 of his 13 points after halftime, as the Longhorns pulled away.  Texas heads for Kansas City with momentum, on a heels of a three-game winning streak, all on the road.  When UT shares the ball, they are tough to beat; the Longhorns had 20 assists on 30 made field goals at TCU and shot 54 percent from the field.  But be careful what you wish for; the combination of WVU’s loss to Oklahoma State and the Longhorns’ win at TCU vaulted Texas up to a three seed in the conference tourney and another game with Texas Tech, who upset UT twice during the regular season, including a last-second loss in Austin back in January.

Kansas remains a big question mark in terms of what to expect from the Jayhawks once they get to Kansas City for the Big 12 Tournament.  KU has won seven of eight games since its loss at WVU, but struggled in its most recent game — a 67-62 non-conference win over UTEP at the Phog last Thursday night.  A game in which the Miners lead by 14 at the half and was tied with thirty seconds to play.  Ochai Agbaji led KU with 19 points, but it was really David McCormack who key the comeback after an awful first half, finishing with 18 points.  While it’s certainly been a bumpy ride this year for KU, Bill Self’s collection of eight Big 12 Tournament titles shouldn’t be ignored.

There are still plenty of reasons to believe that WVU can still make a serious run at the Big 12 Tournament and get into at the very least the second weekend of the NCAA tourney after that, but you can’t feel very good about the way they played against Oklahoma State.  With the ability to lock up a second seed at the conference tourney, not to mention earn Bob Huggins’ his 900th career win, WVU struggled at both ends of the floor.  Even without Cade Cunningham and Isaac Likekele, OSU shot 58 percent for the game and scored 50 (!) of their 85 points in the paint.  The Mountaineers were just 5-of-24 from three in the loss to the Cowboys; those numbers will have to improve when they see OSU again on Thursday in Kansas City.

Remember when Oklahoma was the hottest team in the Big 12?  That’s certainly not the case at the moment.  The Sooners limp into the Big 12 Tournament losers of four straight; a losing streak that began at K-State, featured back-to-back Bedlam losses and a 69-65 defeat at the hands of Texas last Thursday night.  If you are looking for reasons to get on the Boomer Sooner bandwagon in the conference tourney, those four losses came by a combined seventeen points.  Austin Reaves had 16 points in the loss to Texas, while Alondes Williams and Brady Manek added 13 points each.  OU has a host of quality wins — two of which came at the expense of WVU — but head to Kansas City with just a 9-8 mark in conference play.  Oklahoma opens play in the Big 12 tourney against Iowa State on Wednesday.

Baylor snapped TTU’s three-game winning streak on Sunday night in Waco, 88-73.  Texas Tech has now lost four straight to BU in Waco.  The Red Raiders’ defense has no answers for the Bears’ offense; Macio Teague had 35 points, including ten threes and as team, BU was 15-of-24 from beyond the arc.  Mac McClung was held to just 7 points on 3-of-9 shooting from the field.  Positives for the Red Raiders included Kyler Edwards, who led Texas Tech with 18 points; he’s been in double figures in four straight games.  TTU also committed just seven turnovers against the vaunted Baylor defense in defeat, but were out rebounded 40-27.

K-State heads to the conference tourney on their best roll of the season, winning three of their last four games.  The Wildcats finished the regular season with a 61-56 win over Iowa State on Saturday.  Mike McGuirl went out in style on Senior Day, leading KSU with 17 points.  DaJuan Gordon chipped in 12 points, while Nijel Pack also hit double figures with 10 points in a game in which K-State had only eight turnovers.  After the game, Bruce Weber announced that  Antonio Gordon is finished for the season due to injuries, but would not confirm he’s still in the Kansas State program.  A win at TCU on February 20 started the KSU resurgence and a rematch with the Frogs in the first round of the Big 12 Tournament awaits them on Wednesday.

When the Frogs closed out the regular season on Sunday night with a 76-64 home loss to Texas, it dropped TCU under .500 for the first time this year, at 12-13.  TCU  has now lost three straight and six of their last seven games, heading into the Big 12 tourney and a first round matchup with Kansas State on Wednesday.  As has been the case for most of their late regular season slump, TCU was its own worst enemy in the loss to Texas; the Frogs had 22 turnovers and just 24 made field goals.  Regarding their matchup with K-State at the Big 12 tourney, the two teams split their season series, with each winning on the other’s home court.  Ironically, it was following K-State’s win over TCU in last year’s tourney in Kansas City, that the plug was pulled on the rest of the event due to COVID.

This season’s version of “Hilton Magic” saw the home team’s victories disappear.  How bad was Iowa State this year?  The Cyclones were historically bad; finishing 2-21 overall and 0-for-18 in conference play.  This was the first ISU team without a conference win since 1937 and the first team to win less than ten games in four decades in Ames.  How safe Steve Prohm is at this point is an open question, but whoever coaches this team next season begins the campaign riding a 21-game   regular-season losing streak in Big 12 play.