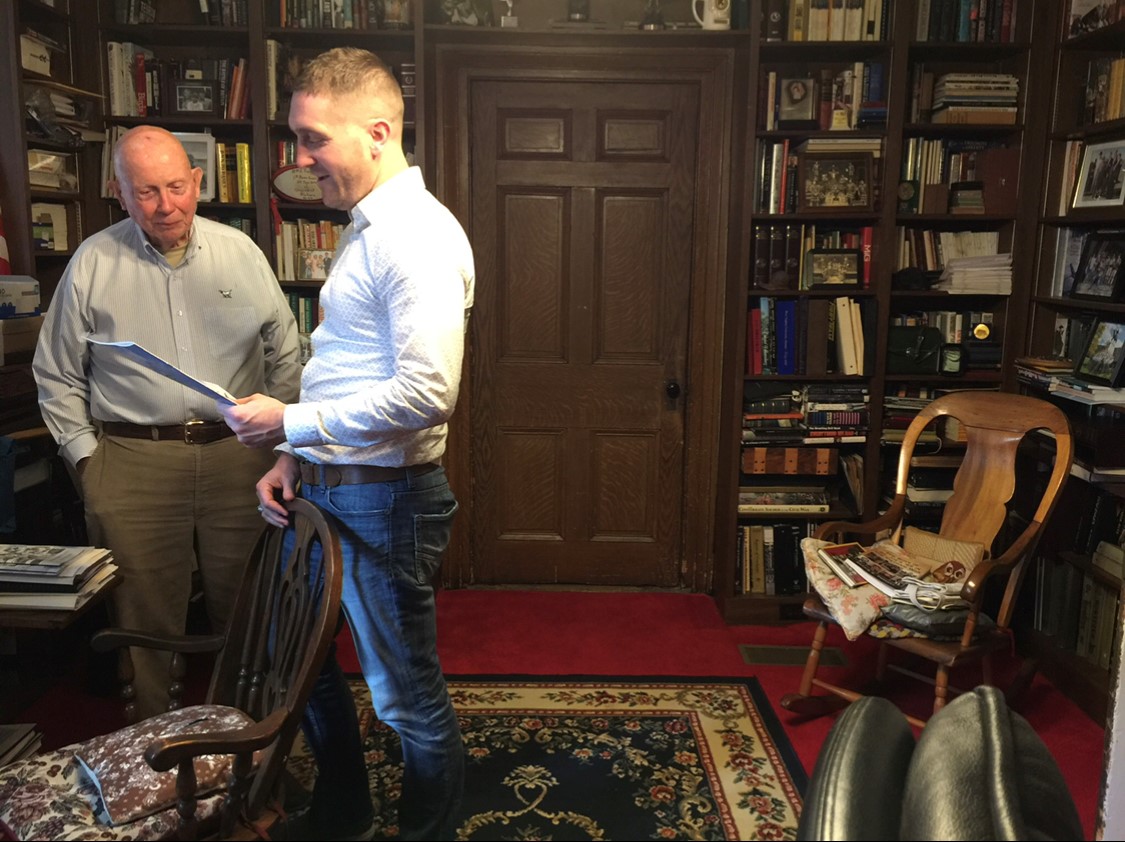 One of America’s most decorated veterans, a West Virginia resident, says he is getting impatient that the Defend the Guard Act isn’t getting consideration in the state Legislature.

“We need to take a stand to take care of our soldiers, airmen, sailors, Marines and not commit them to war unless this nation is threatened and the Congress decides to go to war.”

He was awarded the Distinguished Service Cross, five Silver Stars, four Legion of Merits, three Distinguished Flying Crosses, four Bronze Star Medals, two Crosses of Gallantry, two Purple Hearts, and fifty-one Air Medals.  He has been recognized as a distinguished graduate of West Point and enshrined in both the Army Aviation Hall of Fame Fort Rucker, Alabama, and the Georgia Hall of Fame in Warner Robins.

Bahnsen was a West Point classmate of Norman Schwarzkopf, who went on to lead coalition forces in the first Gulf War. The two remained lifelong friends, and Schwarzkopf wrote the introduction to Bhansen’s memoir, “American Warrior.”

He retired in 1986 as a U.S. Army Brigadier General. He moved to West Virginia, his wife Peggy’s home state, in 1995. They reside in New Cumberland.

Bahnsen has a mentor relationship with Delegate Pat McGeehan, R-Hancock, a graduate of the U.S. Air Force Academy who served as an intelligence officer in the Air Force. McGeehan has sponsored the “Defend the Guard Act” for several years in a row.

“I follow it as close as anybody can. I think it’s a great bill. I applaud Pat McGeehan for having put that bill forward. He’s done it over and over and over again ,” Bahnsen said. “He’s gotten very little support, which pisses me off. But that’s neither here nor there.”

The bill would require Congress to make an official declaration of war — or an action to call forth the state militia — before members of the West Virginia National Guard may be released from state control to participate in active duty combat.

Thirty-one states are considering forms of the “Defend the Guard” bill, including some big ones like Texas and Florida. That’s according to Bring Our Troops Home, a national organization meant to withdraw troops from overseas conflicts, particularly those without a congressional declaration of war.

In West Virginia, the bill was referred Feb. 10 to the Veterans Affairs and Homeland Security Committee, which didn’t take it up.

On March 12, McGeehan made a motion on the House floor to discharge the bill from that committee, but it was voted down after vigorous debate.

Time is running out again this year for any kind of legislative consideration.

Today is Day 42 of the annual 60-day session. By Day 47, which is this coming Sunday, bills are due out of committee. The 50th day, March 31, is the last day to consider a bill in its house of origin.

Concerns with the bill have been whether it would interfere with federal law — or if it could result in financial penalties against states.

The West Virginia National Guard has traditionally pointed to its two-fold mission at both the state and federal level.

“When I signed up and when all of our members sign up to this organization, they understand there’s a commitment not only to the state but to the nation,” he said. “They’re always prepared to step up and do what needs to be done. That, to me, is what our service is about.”

Kanawha County commissioners released a joint statement earlier this year saying they oppose the bill because of its potential economic effects on the area.

“This bill is misleading – if passed, it will defund, not defend, the West Virginia National Guard,” said Kanawha County Commission President Kent Carper, a Democrat.

“I recognize the intent of the bill is to prevent endless conflicts and foreign wars; however, the Defend the Guard act is not the proper means to accomplish this goal,” Wheeler stated. ” I believe this bill, if passed, would impede the ability of our National Guard to act during times of local emergency.”

Financial concerns should be less of a concern than military conflicts without congressional approval, Bhansen said.

“That should be the last reason they shouldn’t do it,” he said.

American military action also should included narrowly-defined objectives, Bhansen said. He cited the “Powell Doctrine,” which is a set of questions to be asked before United States military action, including whether there’s a clear, attainable objective.

“We haven’t done that lately, and we’ve let the thing go unending — for example in Afghanistan.”

Bhansen said he was shaped by his own military experiences. He believes the standard for American military intervention has to be clear.

“The United States should not be involved in a war without a declaration of war by the Congress. That’s fundamental to our government and our constitution and laws to say we’re supposed to vote when we go to war. The last time we did that was in World War II. Since then we’ve had the Korea, Vietnam, all these other actions that have been put together by leadership in Washington without a vote of Congress.

“One American lost in a war, unnecessary war in my mind, is a tragedy. It’s a tragedy for everyone involved.”