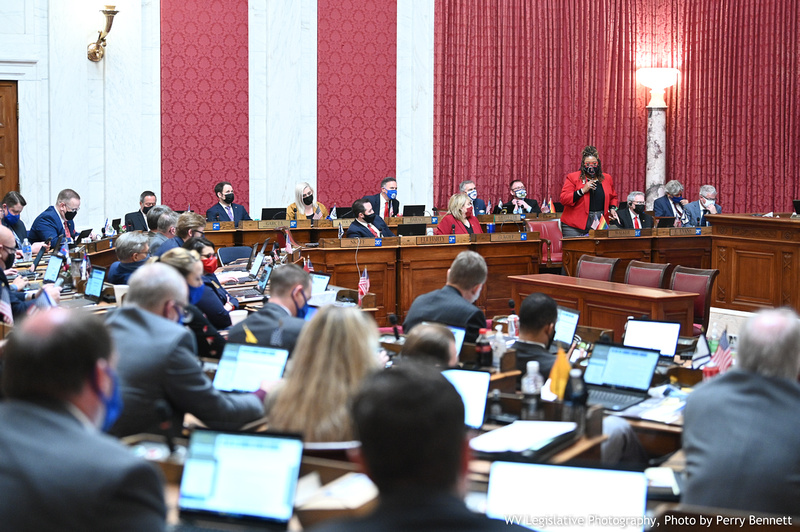 West Virginia’s House of Delegates passed a bill that would prevent transgender secondary schools athletes from playing on teams other than those representing their birth gender.

The bill passed 78-20 and now goes to the state Senate for consideration.

“This is a cruel bill that offers a solution in search of a problem,” stated Andrew Schneider, executive director of Fairness West Virginia.

“Sixteen other states and the NCAA allow transgender kids to fully participate in school sports without any issue. School sports are important. They teach our kids the value of discipline, teamwork, self-confidence and other essential life skills. No child should be denied that opportunity.”

Supporters of the bill acknowledged they are unaware of the situation arising in West Virginia prep sports programs.

The answer was no.

Delegates debated the bill for more than an hour before passing it.

Such bills have arisen in several states since President Joe Biden signed an executive order saying that a court case about transgender rights applies to Title IX, a federal education law that prevents discrimination based on sex.

In West Virginia, House Education Chairman Joe Ellington, R-Mercer, said the bill has advanced because “There have been instances throughout the country where this has been an issue about unfair competitive advantage.”

House Bill 3293 would require county school districts to confirm the sex of students at birth prior to their participation in single-sex interscholastic sports events.

That confirmation may take place through submission of an original birth certificate or by a signed physician’s statement of the student’s  “unaltered internal and external reproductive anatomy.”

The bill would apply to secondary schools, and delegates discussed its application to grades 6 and up.

The West Virginia Chapter of the American Academy of Pediatrics expressed opposition to the bill.

Transgender youth in West Virginia are at higher risk of suicide than their cisgender peers, and this bill will only further the discrimination transgender youth experience. We urge lawmakers to reject House Bill 3293.”

“What is so disheartening about this bill is a child can play a sport until they get to secondary education where their classmates cannot see their differences at all. Where that child may not have been bullied before, we’re opening up an opportunity,” Walker said.

Delegates who spoke in support of the bill said it would assure girls would not face competition from athletes who were born as boys.

“I rise in support of all the women here, of all the girls playing sports across this land,” Burkhammer said.

Delegate Barbara Fleischauer, D-Monongalia, said her own daughter has left the state and that this kind of bill would ensure she won’t return.

Other Democrats spoke out to say the bill would make transgender students feel ostracized.

Delegate Joey Garcia, D-Marion, described the message as a “psychological attack, emotional attack on some of our most vulnerable people in the state of West Virginia.”

He said, “Every child is a beautiful creature of God, and yes, created in God’s image. And beautiful exactly as they are. Regardless of what anybody thinks they should be like.”

Garcia concluded, “I did not come to Charleston to make it more likely that anyone who is considering whether or not this life is worth living any more, to push them over the edge.”

Delegate Kayla Young, D-Kanawha, asked if there was a stakeholders meeting of athletic groups or LGBTQ groups prior to legislative consideration. There was not. She also asked if the bill was considered in the House Health Committee. It was not, although it did go through Education and Judiciary.

“I think this bill is all about partisanship and prejudice,” Young concluded. “I think it’s full of bigotry, and I don’t support it.”

Delegate Roger Conley, R-Wood, rose and said the issue is already covered by the law. The law he meant was the Book of Genesis in the Old Testament. He read from the King James Version: “So God created man in his own image.”

“I don’t want all this mixing and matching in these locker rooms,” Mazzocchi said, suggesting there’s not often enough adult supervision.

“You’re making a big problem out of nothing. I’m sorry. We have boys and we have girls. And we have some that are in between. Why are we making this a big deal. It is not a huge, big deal. I want to end this discussion. It’s sickening. I’m sorry.”