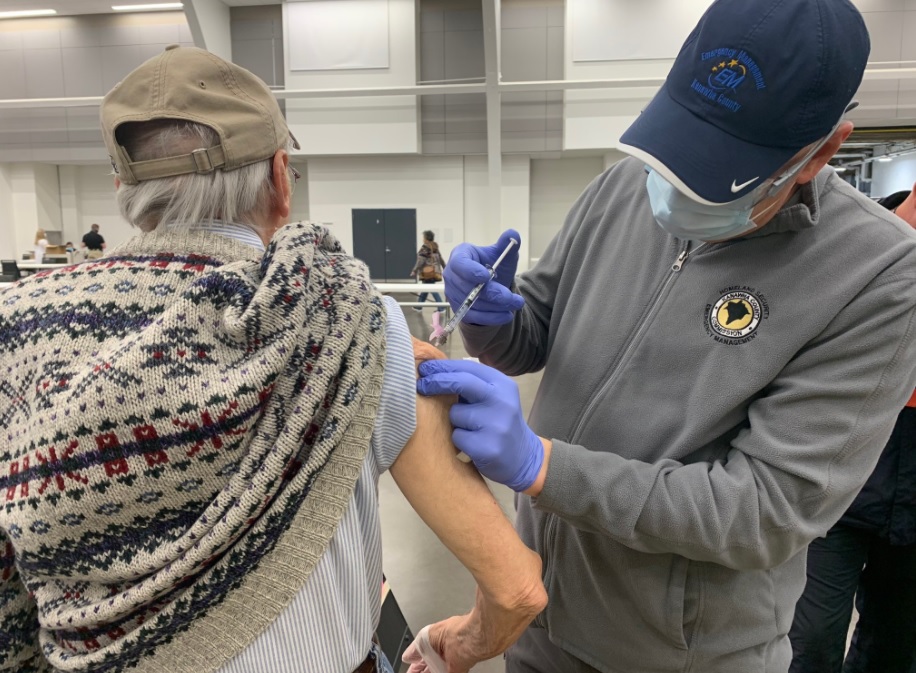 HUNTINGTON, W.Va. — Marshall University was all set to give out the Johnson & Johnson COVID-19 vaccine to its students for the first time on Tuesday until it wasn’t.

Daniel Persinger, an Environmental Health and Safety Specialist at Marshall and leading the logistics of the clinics on campus, received word early in the morning that there was a recommendation by the Centers for Disease Control and Prevention (CDC) and the Food and Drug Administration (FDA) to pause that usage of that vaccine.

The recommendation came following six reported U.S. cases of a rare type of blood clot in individuals after receiving the vaccine out of 6.8 million doses given nationwide.

Persinger and Marshall officials quickly shifted with the Cabell-Huntington Department to ensure a clinic held in the Don Morris Room could go on.

“We were notified at 7 a.m. that Johnson and Johnson had a pause on it from the CDC and the FDA. Immediately we got in contact with the Cabell-Huntington Health Department and tried to find a way to hold a vaccine clinic,” Persinger told MetroNews.

Three hundred Moderna vaccine doses were given out to students on Tuesday, each student having to come back in three weeks for a second dose. Persinger said Tuesday was scheduled to be the first time Marshall had given Johnson & Johnson doses out all year because a patient only needs one shot, and time in the semester is winding down. WVU paused Johnson & Johnson vaccination as well.

Due to this morning’s pause of the Johnson & Johnson vaccine by the CDC and FDA, today’s on-campus vaccination clinic will use the Moderna vaccine, which requires a second dose. Everyone who receives their first dose today will be notified when it’s time for their second dose.

2,579 first doses of a vaccine have been given at Marshall during the pandemic, as of the latest update on the university’s COVID-19 dashboard. 1,766-second doses have been given out.

Persinger said no students expressed hesitancy when given Moderna at the last second. He hopes that it stays that way as Marshall’s COVID-19 numbers have gone down with only 10 cases on campus according to the dashboard.

“Our goal from day one is to educate students and staff on the benefits of receiving the vaccine. We hope this is a blip on the radar for vaccine hesitancy,” Persinger said.

Shortly after the announcement from the CDC and FDA, Gov. Jim Justice announced that all use of the Johnson & Johnson COVID-19 vaccine in West Virginia would be paused immediately until further notice.

Dr. Sherri Young, chief health officer of the Kanawha-Charleston Health Department (KCHD) described the rare type of blood clot found in six individuals, including one fatal case, to be Cerebral Venous Sinus Thrombosis (CVST). All six cases were found in females between the age of 18 and 49.

“It’s very difficult to treat, it’s very complicated, it’s a severe complication. If this was a more minor complication I don’t know they would have taken the same stance because it is so exceedingly rare. Six cases in seven million. But it’s enough to say pause,” she said at a press conference.

The KCHD has vaccinated 1,888 citizens with the Johnson & Johnson vaccine. Young said that as of Tuesday no severe side effects have been reported in the county. However, KCHD is monitoring CAMC Neurology and other local hospitals to see if anything has been reported.

Young said if a person received the Johnson & Johnson shot three or more weeks ago then they should not have to worry.

“For those who are concerned about symptoms or complications, or have risk factors, here is what you need to look for. Severe headache, abnormal swelling in the lower extremities, or symptoms of a blood clot. Chest pain, chest tightness, difficulty breathing. Those are symptoms you would look for because they are either precursors or symptoms of CVST,” Young said.

Young said KCHD had 800 Johnson & Johnson doses set to be used in drive-thru and community events. She said the health department will shelve the doses, which have a six-month shelf life and wait until a further recommendation from the CDC.

She said many events will shift to Pfizer or Moderna and the county is in ‘good shape’ with allotments. According to Young, there should be no concern about receiving Pfizer or Moderna because they are made differently than Johnson & Johnson.

The CDC’s Advisory Committee on Immunization Practices is holding a meeting Wednesday to determine how to go forward, Young said. The committee will assess the situation and see if any safety measures need to be put into place before the resumption of the vaccine.

Johnson & Johnson said in a statement, “The safety and well-being of our people who use our products is our number one priority. At present, no clear causal relationship has been established between these rare events and the vaccine.”

The WV Department of Health and Human Resources (DHHR), through the federal Vaccine Adverse Event Reporting System), has not received any reports of these extremely rare blood-clotting events in West Virginia residents who have received the Johnson & Johnson vaccine, Justice’s office said. The DHHR will continue to monitor for instances going forward.

465,793 West Virginians have been fully vaccinated as of Tuesday, according to the DHHR. 665,930 first doses have been administered.