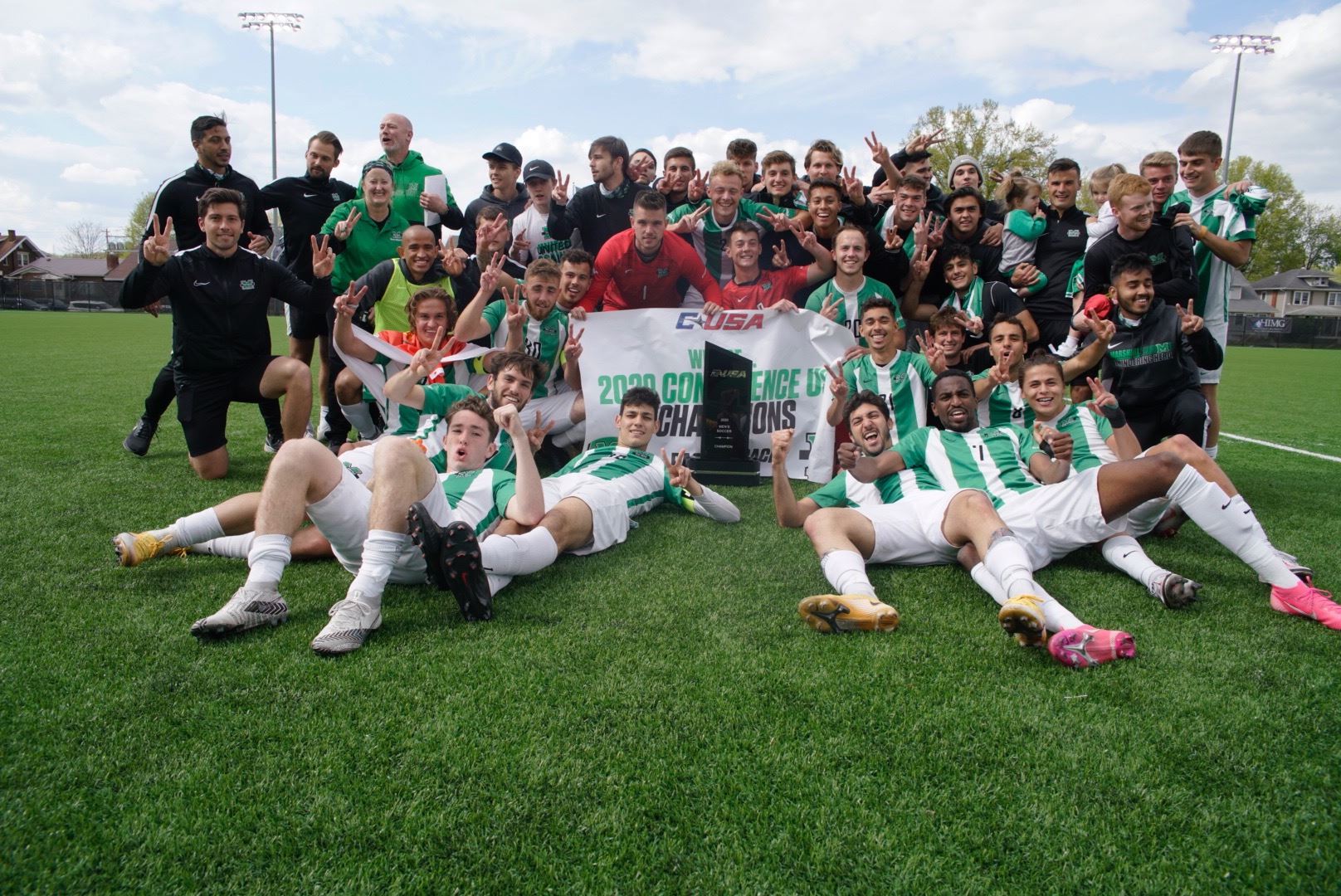 Marshall beat Charlotte 2-0 to clinch the Conference USA title and a spot in the NCAA Tournament. Photo by Adam Gue/Marshall Athletics

HUNTINGTON, W.Va. — Senior Day turned out to be special for Jamil Roberts and Kyle Winquist as No. 9 Marshall scored twice in the second half to blank No. 12 Charlotte, 2-0, Sunday at Hoops Family Field. The win gives Marshall the regular-season title in Conference USA and allows the Herd to claim the league’s automatic bid to the NCAA Tournament.

The Thundering Herd is 9-2-2, 6-0-1 in C-USA. Charlotte (6-3-1, 6-1-0) suffered its first league setback. Due to the ongoing coronavirus pandemic, there is no postseason league tournament.

The Herd learns its destination for the NCAA Tournament Monday at noon and the selection show will be streamed on NCAA.com.

Jan Erik Leinhos converted a penalty kick in the 64th minute to get the Herd a 1-0 lead. It was the fourth goal of the season for Leinhos.

Pedro Dolobella tallied a score in the 69th minute with an assist to Milo Yosef. It was Dolobella’s first goal.

The Herd now has 24 total goals scored this season and has allowed just six.

Charlotte had several scoring chances, but couldn’t get a shot past Herd keeper Oliver Semmle (8-1-2).

In the 28th minute, Alex Willis took a pass from Joe Brito off a corner, but the header went just over the crossbar. In the 61st minute, Preston Popp’s shot from just inside the box hit off the crossbar. Semmle stopped shots by Jonathan Nvandio in the 80th minute and Brito in the 82nd notch the shutout.

The 49ers finished with nine shots and Marshall 10.

Roberts has appeared in 67 matches with 57 starts. He entered Sunday’s match with 16 goals and is No. 2 in program history in assists with 19. He received credit for seven game-winning goals.

Winquist, senior goalkeeper, has appeared in three matches. He made one start this seaon, going the first half against Ohio Valley and getting the win.

The 49ers lead the all-time series 5-2-3. The Herd has won two in a row with the other win coming 1-0 in double overtime in the C-USA Tournament title game in Norfolk, Va.

Marshall coaches and players will gather in Cam Henderson Center for a watch party. The 49ers, who have been to the NCAAs 14 times, will learned if they get an at-large bid at that time. MU last appeared in the NCAA Tournament in 2019, losing at No. 6 Washington in the third round. The Herd defeated in-state rival West Virginia in the second round.