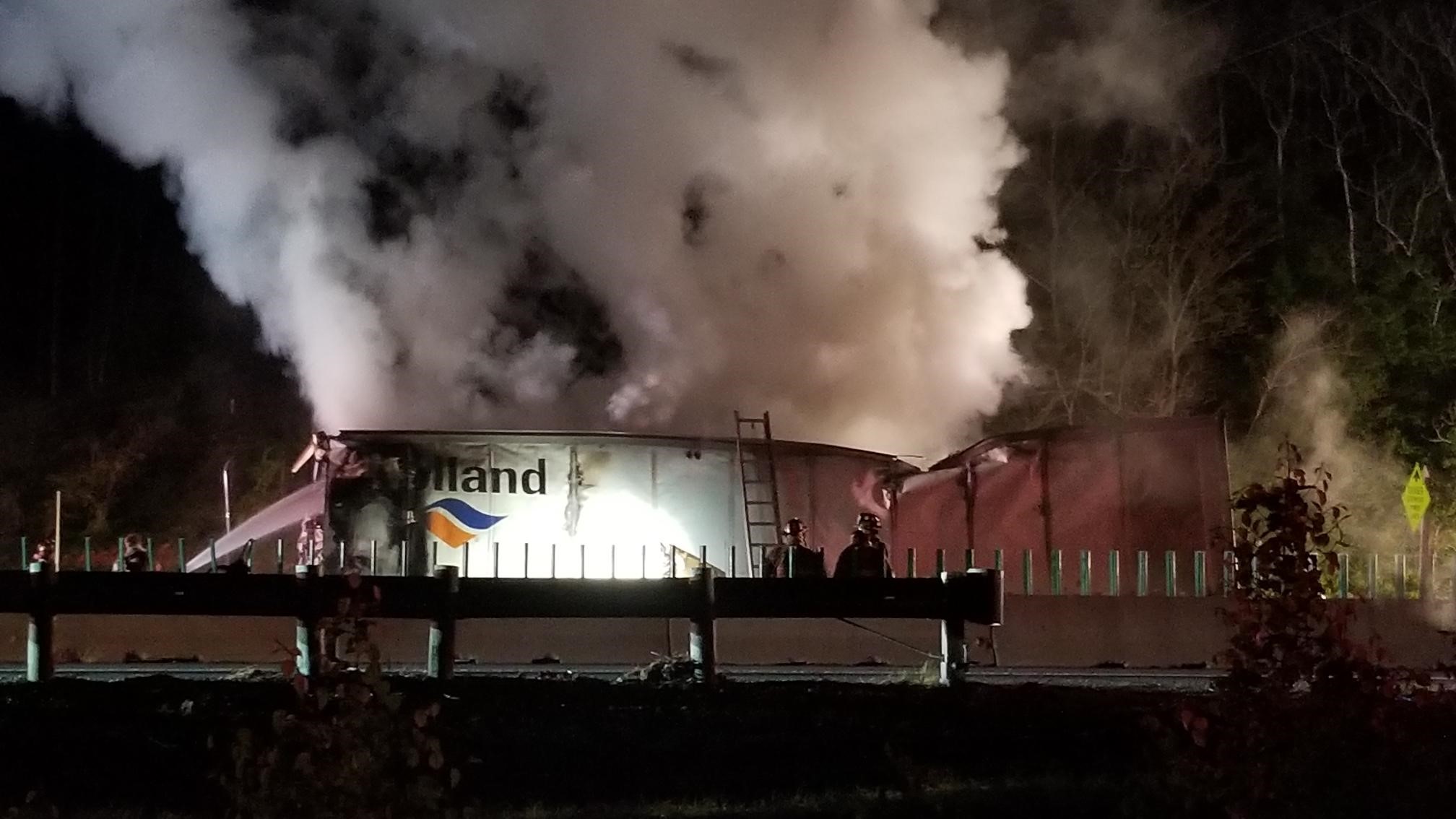 A semi burst into flames after striking a concrete divider in a construction zone on I-64 near Barboursville early Friday morning. PHOTO: WCHS TV

BARBOURSVILLE, W.Va. — A truck driver is dead after a single vehicle accident in the early morning hours on I-64 in Cabell County. The early morning crash in the Barboursville community marked a second straight day motorist who travel I-64 saw their morning commute disrupted.

The semi struck a concrete barrier in the contra-lane of the interstate which bisected the lanes of traffic through a construction zone just past the Huntington Mall exit.

“We actually had an officer on the interstate and he at first thought it was an explosion,” said Barboursville Chief of Police Darren McNeil.

It turned out not to be an explosion, but a fire which ignited when the truck struck the barrier. It was the only vehicle involved and the entire truck was quickly fully engulfed in flames. The driver perished in the blaze. Authorities have not released the man’s name pending notification of relatives.

The truck was owned by a firm out of North Carolina and was hauling what Chief McNeil described only as “consumer goods.” The load was not flammable or hazardous material, but the crash was spectacular and for a period of time shutdown both directions of the interstate.

“There was debris scattered probably over 100 yards,” McNeil said.

Traffic was detoured onto U.S. Route 60 between the Mall and Merrit’s Creek exit for several hours while the wreckage and debris were cleared.

“The true heroes up there were the DOH and Triton Construction who are handling the Construction Zone. They worked diligently to get that interstate back open as quickly as they could,” he said.

The cause of the crash remained under investigation Friday morning. The semi was the only vehicle involved.

The crash came a day after a sudden and unexpected coating of black ice only a few miles to the east at Milton a day earlier caused seven accidents in a half hour period and also shutdown the interstate in that area for several hours.

News
Property owners can challenge updated flood maps in 2 counties
FEMA has adjusted the flood hazard zones for Kanawha and Greenbrier Counties in the wake of the 2016 flood. Property owners who see a change in status have just under three months to challenge the changes.
By Chris Lawrence
News
WVU, Monongalia County set to welcome lawmakers for interim meetings
Three-day schedule begins Sunday afternoon.
By Mike Nolting
News
Vehicle crashes through front of Dairy Queen in Putnam County
Restaurant workers were serving customers when the crash happened Saturday evening.
By Jeff Jenkins
News
West Virginia officials mark May as Foster Care Month
May is National Foster Care Month, which is focused on raising awareness and recognizing foster parents and volunteers dedicated to helping children.
By MetroNews Staff
View AllHoppy's Commentary