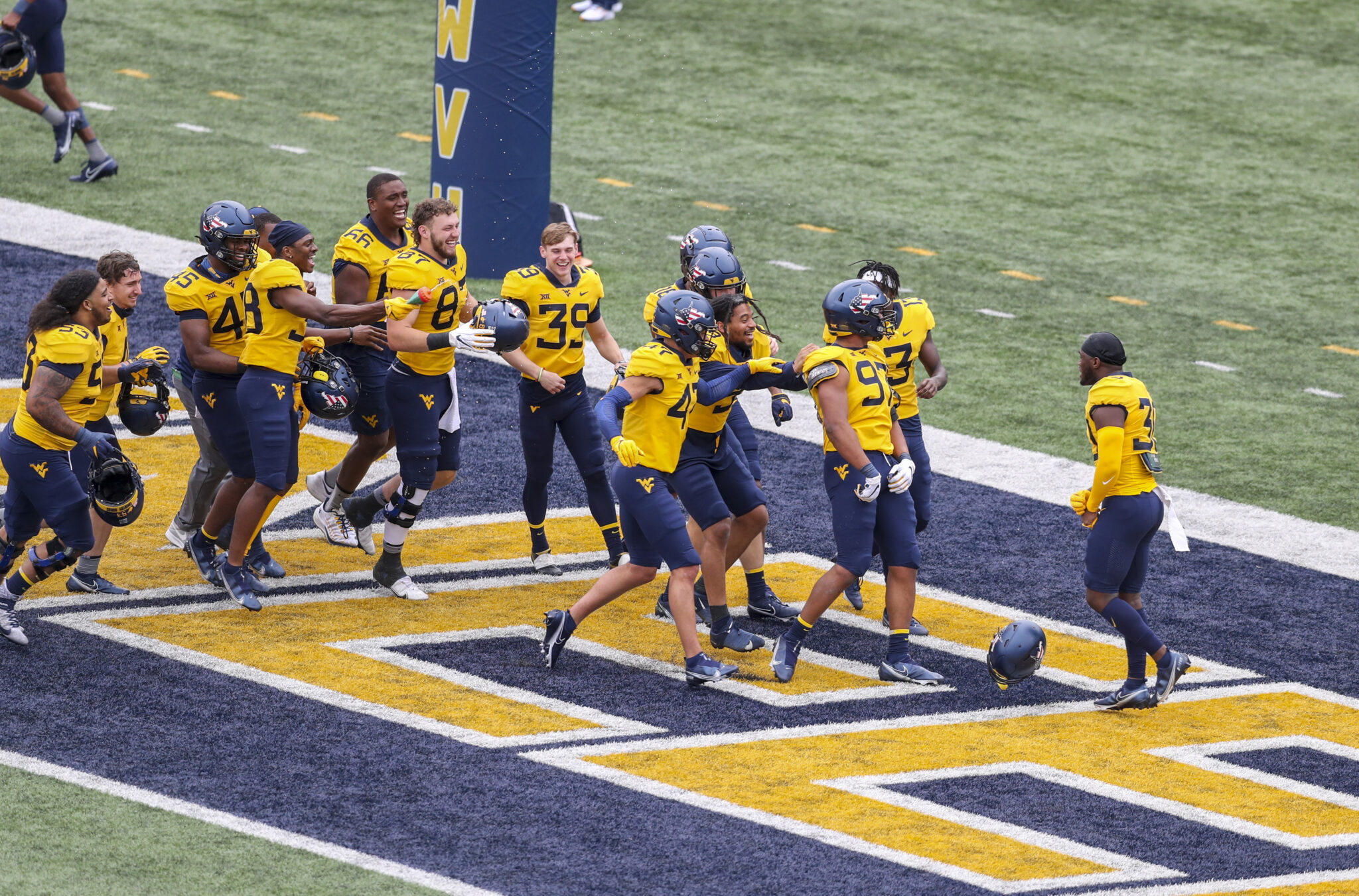 Players from the Gold team celebrate with defensive lineman Brayden Dudley (97) at the end of the Spring Game at Mountaineer Field at Milan Puskar Stadium. Mandatory Credit: Ben Queen

MORGANTOWN, W.Va. — Days after the NCAA approved rule changes for college football overtime starting this season, West Virginia ended its annual Gold-Blue Spring Game in a more unusual fashion than what could be awaiting in the fall.

With the score tied at 38, head coach Neal Brown went to his big man 1-on-1 route-running drill to settle the outcome, and it featured junior offensive lineman Noah Drummond matched up with freshman defensive lineman Brayden Dudley.

Freshman quarterback Garrett Greene’s pass to Drummond was broken up by Dudley, giving the Gold team a point and a 39-38 victory to put a wrap on spring football in front of 8,312 at Milan Puskar Stadium.

“We did it earlier in the spring and Drummond let it go off his finger tips,” Brown said. “I told him if we had a tie, that’s how we’re settling it. Sometimes you need to lighten the mood. The big man deal is fun.”

Saturday’s event began with special teams drills and moved to running backs trying to gain 20 yards on four plays with three blockers taking on three defenders before the scrimmage began.

“We need him to come on. He played better toward the end of the spring than he did at the beginning and the pick he had in the end zone was a special play,” Brown said. “The two pass breakups were both very special plays.”

On the ensuing series, starting quarterback Jarret Doege found the end zone on a 1-yard run, allowing Gold to score the only touchdown of the first half.

“Jarret was really solid. I was excited that he pulled the ball on the zone read at the goal line and scored,” Brown said. “That’s been a point of emphasis.”

At halftime, Doege and Greene had a special guest join them in quarterback competitions — WVU point guard Miles “Deuce” McBride, himself a former standout high school quarterback at Archbishop Moeller in Cincinnati.

“I had an event with (men’s basketball coach Bob Huggins) last week and mentioned it to him,” Brown said. “He said, ‘as long as there’s no gear involved, I’m good with it.’ I figured the fans would enjoy it and they did. He was a great sport about it.”

With the game tied at 32, Gold went in front when Avery Wilcox intercepted Will Crowder and returned it 46 yards to the end zone.

Crowder, however, responded nicely and found Sam Brown for a 65-yard touchdown pass to get Blue even at 38.

The Blue team finished with 41 offensive plays and an average of 5.4 yards per play, while Gold averaged 3.6 yards on 27 plays.

Doege was 10-of-14 with 79 passing yards. Winston Wright served as his favorite target and caught four passes for 43 yards.

“The ceiling is very high,” Wright said. “We’ve been in this offense with coach Brown for two years and we’re all comfortable, so it’s about taking that next step.”

Greene was 8-of-16 with 103 yards and the interception. The highlight of his day was a 51-yard pass to true freshman wideout Kaden Prather.

While quarterbacks were not permitted to be tackled, the Gold team was credited with four sacks — two by Jordan Jefferson and one each from Sean Martin and Jared Bartlett.

VanDarius Cowan and Akheem Mesidor each registered a sack for Blue, which did not force a turnover.

The overtime rule change in college football will require teams to attempt a 2-point conversion after scoring a touchdown in the second overtime. If the game reaches a third overtime, it will be decided on a 2-point conversion shootout, somewhat similar to how penalty shots decide hockey games.

AWARD WINNERS: In addition to bringing McBride on the gridiron to compete alongside Doege and Greene, Brown announced West Virginia’s spring football award winners at halftime.

They were as follows: