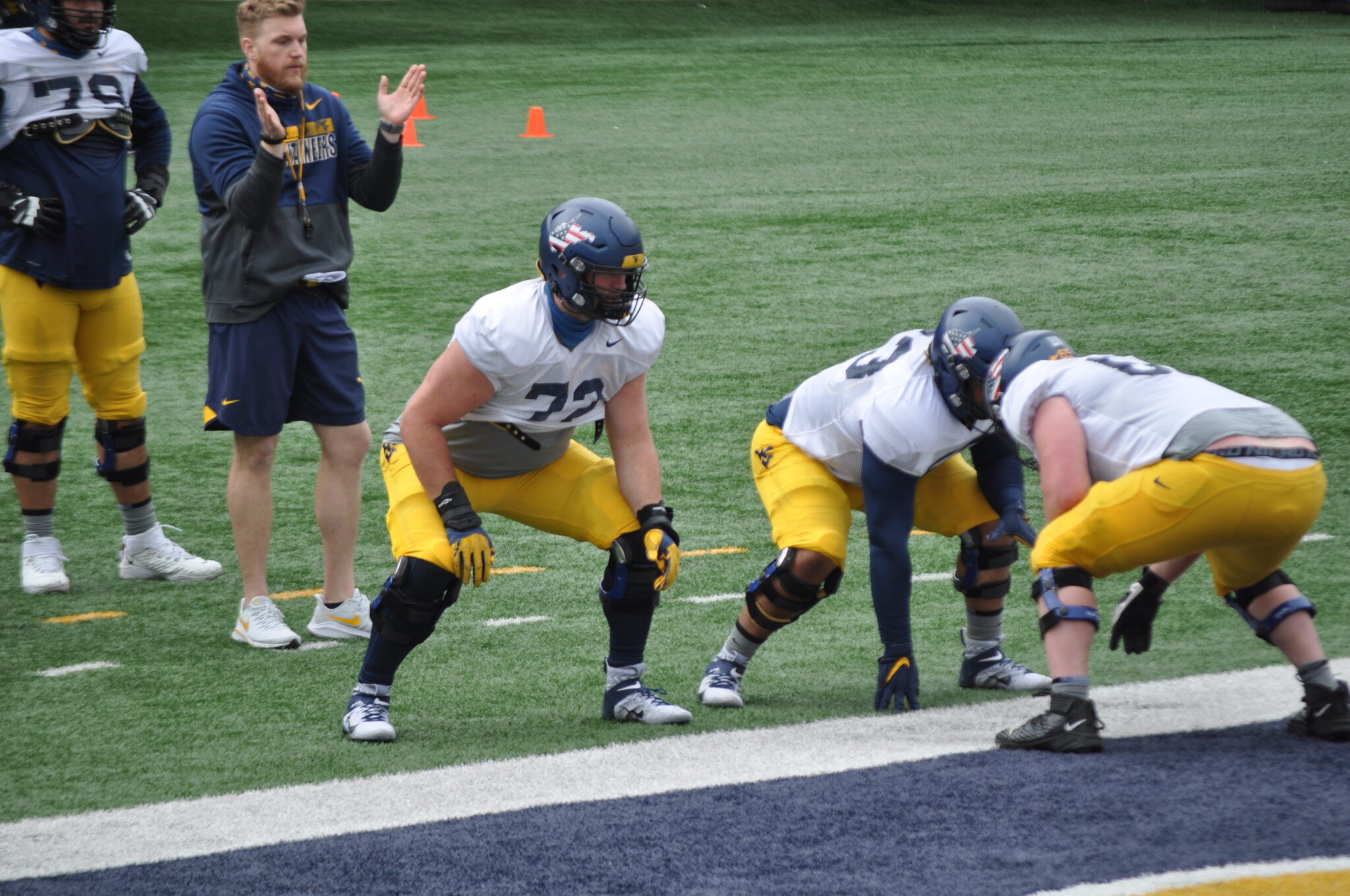 Doug Nester (72) participates in a drill.

MORGANTOWN, W.Va. — For as much measurable progress that was put on display by the West Virginia offensive line last year, coaches and players acknowledge more improvements must be made over the spring and summer months for the Mountaineers to firmly entrench themselves as a team that regularly takes up residence in the top half of the Big 12.

Third-year offensive line coach and assistant head coach Matt Moore says he notices that his group is now more competitive in practice against a Mountaineer defense that established itself as one of the best in the nation last year.

“The first year, it was shelter skelter. People were running through and I don’t think Leddie (Brown) ever trusted the guys I had up there. With this group, through recruiting and coaching and continuing to work every day, we are getting better and building that trust. That’s when you have some good offenses.”

West Virginia’s rushing attack averaged 135 yards a game last season, up from just 73 yards a game in 2019. Moore believes that a combination of veterans, newcomers and soon-to-arrive freshmen can allow enough depth to withstand injuries and move players around to various spots along the line.

“Now I feel like I have guys that I can move around. I

“We don’t have to go out there where we have two at each position. I have my top five and if I can find three more, one that can snap and then the other two that can play right and left tackle, I feel good about having some depth going in there.”

For the second year in a row, the man in the middle is Fairmont Senior High School graduate Zach Frazier. As a true freshman last fall, Frazier started the season opener at center and was a mainstay in the lineup the rest of the season.

“Communication is huge and we have done much better. It all starts with Zach Frazier. He does a really good job from a communication standpoint.

“He is a football guru. He loves it. He likes to dissect plays. His dad played at Fairmont State and he loves football too. That’s always been their deal that they don’t go golfing or fishing. They sit around and watch old WVU football games and talk about who the ‘mike’ is and the three-technique and who they need to double team. He is a little different because he is way ahead of what most young guys are.”

Spring Valley High School graduate and Virginia tech transfer Doug Nester provided the Mountaineer coaching staff with a significant victory in the transfer portal at the turn of the year. Moore has lined him up at various spots along the line, with a few days to settle in at each position.

“His transition has been great. He fits in perfect because he fits in the same mold as (Brandon) Yates and (James) Gmiter and Frazier and Jordan White. They work. That was the number one thing when he came in during the offseason, he saw the way we worked in the weight room and the standard our guys set for how to work in there with Mike (Joseph).

Although Frazier broke the mold last season by starting as a true freshman on the O-Line, it is widely expected that another Spring Valley graduate in Wyatt Milum can do just that. Though he has yet to arrive on campus, Moore believes Milum can fit in right away this summer.

“He is genetically gifted with bend and twitchiness and strength. He can go in the weight room right now and hang with most of our guys, not the top guys but he would be right there. His high school coach (Brad Dingess) does a phenomenal job with the weight room, which has really helped him.”

The other incoming freshman on the offensive line is Brunswick, Oh. native Tomas Rimac. Two weeks ago, he set school track and field schools record in the discus (183′ 1″) and the shotput (61′ 1″).

“That is pretty impressive stuff for a high school guy. He is going to come in here physically able to compete.”