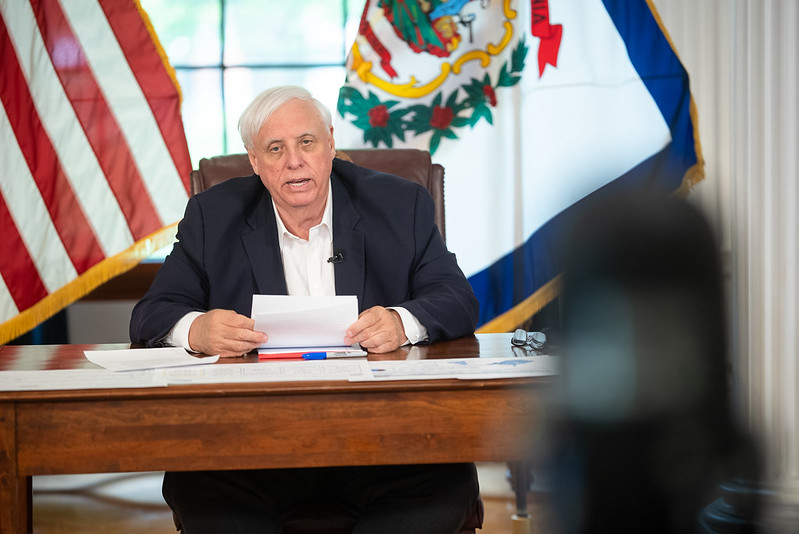 Governor Justice leads a briefing about the state's coronavirus response.

Gov. Jim Justice announced a plan to give $100 savings bonds to state residents between ages 16 and 35 who get vaccinated from covid-19.

“I want to place in your hand a certificate, a savings bond that is your part of stepping up,” Justice said today.

Justice said federal CARES funding could pay for the effort. He acknowledged in followup comments that state officials will have to keep watch over total spending. Bonds are typically purchased at significantly less cost than their eventual value but take many years to mature.

“I hope I’ll be able to get as many savings bonds in the hands of our young people and our kids as I possibly can,” Justice said.

The effort is the result of brainstorming to try to reach West Virginians who may be resistant to vaccination. Justice said he would announce additional strategies to reach people for vaccinations as the week goes on.

The governor and state health leaders have said vaccination efforts have been slowing down.

He said that success rate would put West Virginia well on the path toward a goal of vaccinating 70 percent of vaccine-eligible West Virginians.

“We’ve got to get to a situation where we shut this thing down,” Justice said during a briefing today about the state’s coronavirus response.

But Hoyer agreed that more work is necessary to encourage those who haven’t already been vaccinated.

He said an effort at West Virginia University’s Blue-Gold game resulted in 10 vaccinations — a modest number but 10 more than might have resulted otherwise. After the game, Hoyer said, 16 athletes received vaccinations. “I take that as a good indication these things can work,” Hoyer said.

More efforts are underway to make vaccines available at parks and campgrounds, Hoyer said. “You name it, we’re gonna try it,” Hoyer said.

At the governor’s direction, the Joint Interagency Task Force has established three fixed-location vaccination clinics in Berkeley, Kanawha, and Monongalia counties to ensure that every West Virginian age 65 and older has access to a vaccine.

In addition to official vaccination events associated with health departments, vaccinations continue to be made available at Walgreens locations, the Med Shoppe/Leader network of pharmacies, Walmart locations and additional independent pharmacies throughout the state as part of the federal pharmacy partnership in West Virginia.

West Virginians can go to vaccinefinder.org for assistance in locating and securing an appointment at one of these federal pharmacy partners.

West Virginia’s joint interagency task force continues to reach out to manufacturers and businesses across the state to increase vaccine access for employees and their families by organizing vaccination clinics at these facilities.

Also, church leaders are still being urged to contact the joint task force for help organizing vaccination clinics for interested members of their congregations.

Anyone interested in organizing one of these vaccination clinics is asked to contact the West Virginia Vaccine Info Line: 1-833-734-0965.

Bill Kearns, director of the Berkeley and Morgan County health departments, agreed the pace of vaccination has slowed.

“We’re getting way more than what we’re distributing,” Kearns said today on “Panhandle Live.” That may have something to do with vaccine hesitancy.”

He added, “I think that’s an issue that’s nationwide. The people who wanted to get vaccinated got vaccinated.”

But Kearns agreed that health departments should try to make vaccines available at places people gather.

“We’re trying to get as many shots in arms as possible,” Kearns said.