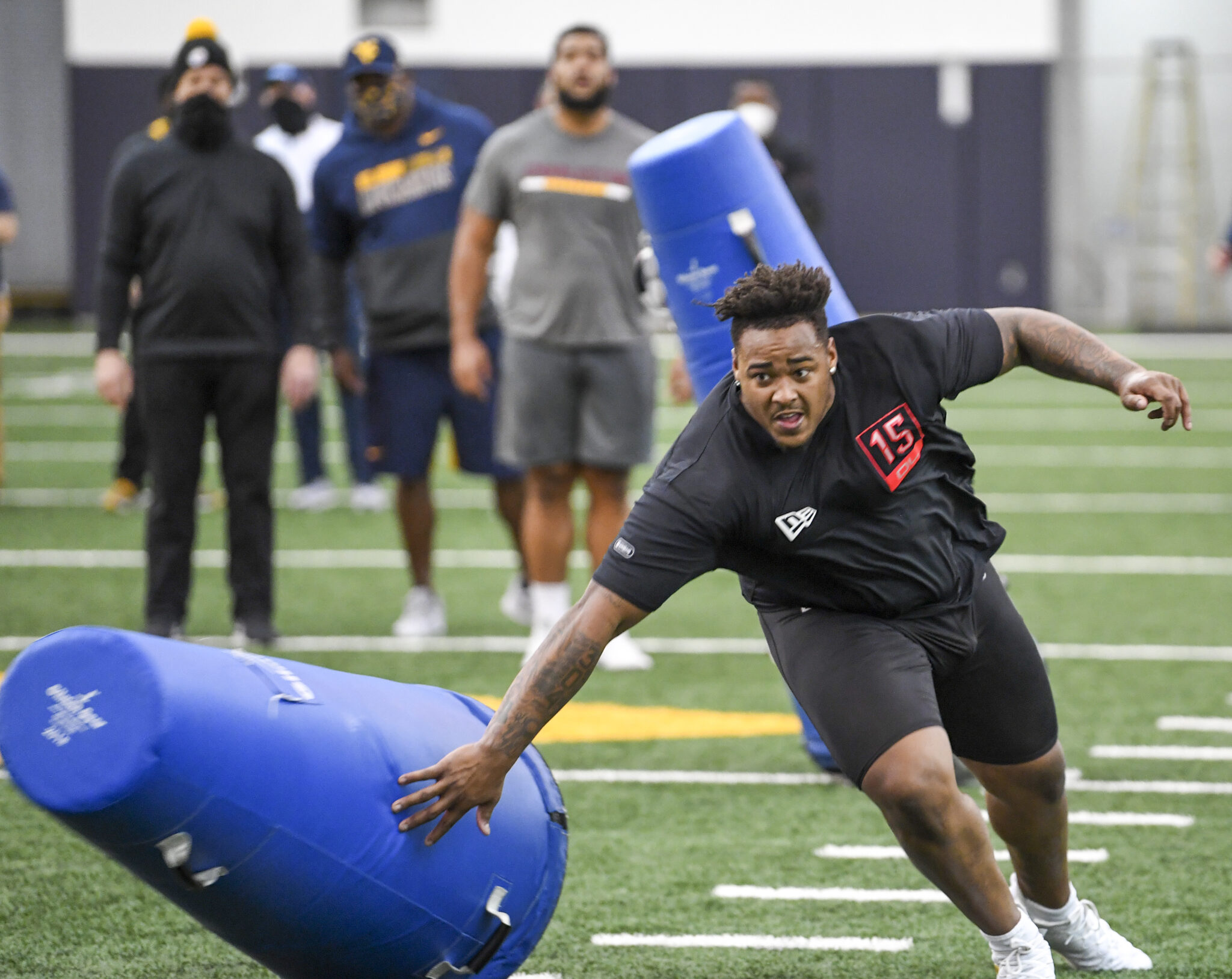 Stills finished his Mountaineer career playing in the AutoZone Liberty Bowl. Following the bowl victory, Stills immediately started preparing himself for the draft by going to Florida and working out. Stills was a guest on the latest episode of 3 Guys Before the Game.

“I planned to get better physically,” said Stills. “I wanted to lean out and gain more muscle and get faster, bigger, and stronger. In the NFL, everyone is good. You have to separate yourself by working hard.”

This year’s meetings with NFL front office personnel have changed due to the COVID-19 pandemic. Teams are communicating with athletes through Zoom and other platforms. Stills has met with 20 NFL teams, but none have been face-to-face.

“COVID year they did a lot of things differently,” noted Stills. “Instead of me going out and visiting teams, we have done Zoom meetings and Facetime phone calls that way they know the kind of player I am. They have seen the film, but they want to see the kind of personality that will be brought into the room.”

Gary Stills, Darius’ father, spent 10 seasons in the NFL. Gary played for the Chiefs (seven years), Ravens (two years), and Rams (one year). Darius grew up watching his father succeed at the next level, and he dreamed of being right where his dad was.

“I think about the draft each day and it feels like a week,” said Darius. “People who have gone through the process will agree with me. Whoever I end up with I will be excited. I am ready to get rolling. I have been training my whole life not knowing if it was going to be guaranteed or not, but I kept working hard.”

Along with Stills’ father being right beside him, his mother has been right there as well.

“My mom has been with us since day one fighting breast cancer,” said Stills. “She takes us on recruiting visits, and she has been the best mom anyone could ask for. This is an emotional time for her as well knowing that all that work I have done has paid off. She is happy and excited. All of those feelings that are going inside her head are going on in my mind as well.”

Stills has been going through this process with the same person that helped his dad get into the league. Brian Levy, a sports agent for 30 years, was Gary’s agent while he went through his career after college football. Levy is now helping Darius 13 years after Gary left the league.

“It is crazy because Brian thinks it is so surreal that he gets the chance to represent me, possibly my brother, and my dad,” said Stills of Levy. “He knows how I feel about everything. He is trying to keep me level-headed and a man. There is a lot that goes into this world that I do not know. There are going to be a lot of surprises and setbacks. He is trying to prepare me for everything. That is why I am grateful for my dad for that.”

Every prospect has different ways of watching the draft. Some will be glued to their television the whole time while others will keep their mind clear.

“I have always watched the first round,” noted Stills on how he goes about this. “It is going to be a long mental process for me so I will take breaks every once and a while and clear my head. Day two and three, I will be glued to the TV. You never know when you are going to get picked.”

Stills wrapped his tenure with the Mountaineers as an All-American last season. Stills’ name will be cemented in the WVU record books. He ranks in the top-25 in program history in tackles for loss (26) and sacks (25). He appeared in 42 career games in the gold and blue.

“It went so fast,” said Stills of his time in Morgantown. “As a freshman, you think ‘dang, I got four more years of this,’ but those four years have gone by in a blink of an eye. My whole experience has been amazing. There is nothing that I can take back from that. I am glad that my experience at West Virginia went the way it did. I would not change anything.”

Stills spent his prep career at Fairmont Senior playing under head coach Nick Bartic. Stills had the opportunity to relive those memories the other day for one last time.

“There were a lot of feelings going into there,” stated Stills. “I used to look up to the college athletes that played at Fairmont Senior that came through that locker room. I used to look at them and say ‘they are there where they are and that is amazing. I might get there one day.’ I am about to go play in the NFL, and I know those kids were looking at me the same way I looked at the guys when I was growing up. It is crazy to have a whole other perspective.”

The first round of the NFL Draft begins tonight at 8 pm.