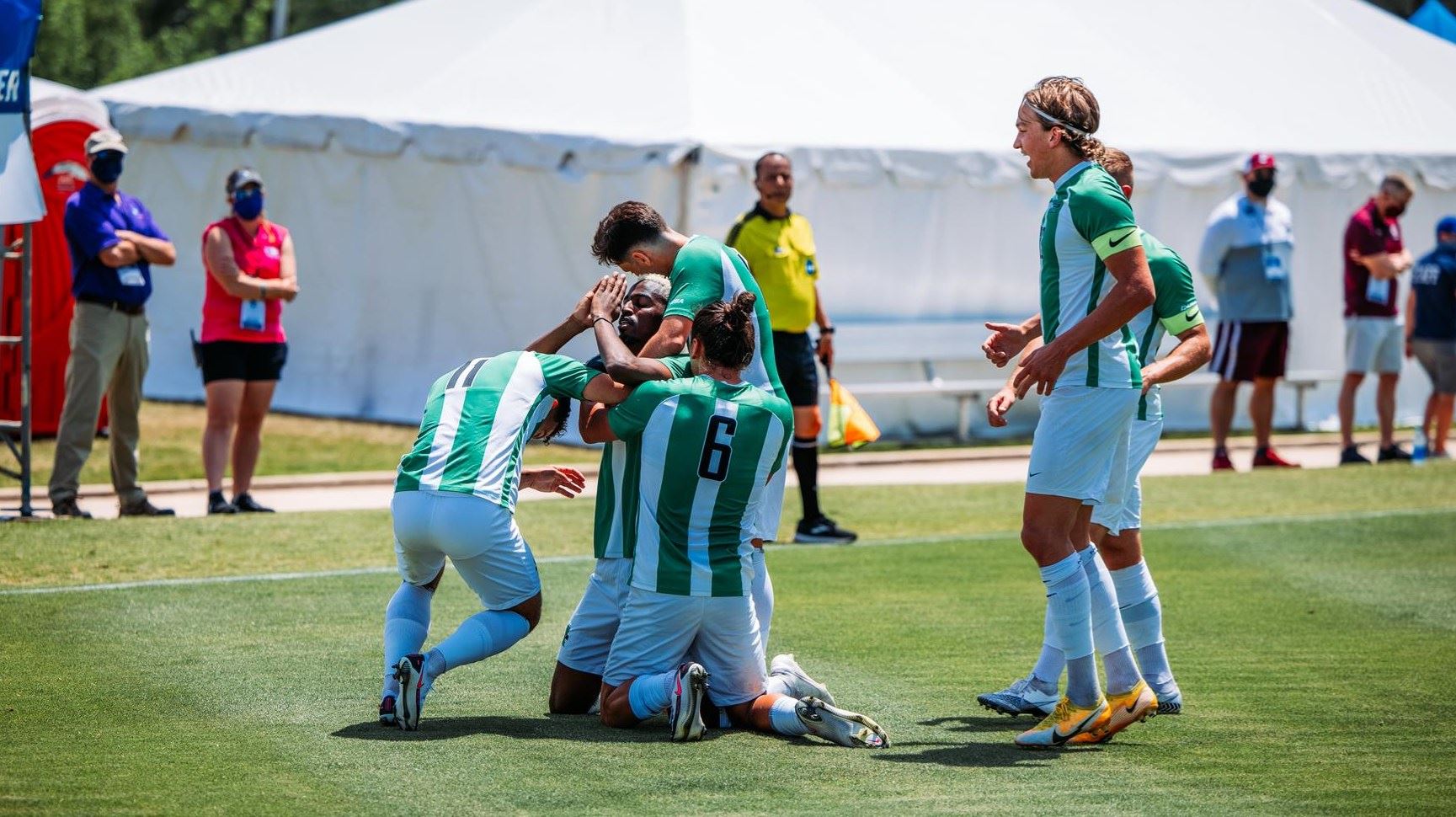 Marshall celebrates its victory over Fordham in the NCAA Tournament. Photo by Tyler Able/courtesy of Marshall Athletics

HUNTINGTON, W.Va. — In just four seasons, Chris Grassie has taken Marshall University from a middle of the pack Conference USA program to the brink of a national championship. The Thundering Herd have played their way through three tightly-contested matchups and into the NCAA College Cup in Cary, North Carolina. Marshall will play North Carolina Friday at 6 p.m. for a spot in the final.

With just one cycle of players coming through since he was hired in January of 2017, Grassie has transformed a program that didn’t have a winning season from 2013-2016.

After defeating No. 23 Fordham 2-1 in overtime in their tournament opener on May 2, the Herd upended No. 1 Clemson on penalty kicks (7-6) last Thursday.

“I thought we played really well. We managed it really well and possessed the ball really well. Honestly, their goal was miles offside. So we were a little unlucky to go to overtime. I think we should have won it in regulation. We felt like we had more going for us and a chance to win it. We felt very confident, especially as the game continued to go on. We felt comfortable in possession of the ball. And in penalty kicks, Oliver Semmle made some great saves in goal. Our guys were ice cold.

“When they asked us about drawing the number one seed in the Clemson bracket, ‘How do you feel about that’? ‘Great, because there will be no asterisks when we win it all’.”

On Monday, the Herd shutout defending national champion No. 8 Georgetown, 1-0.

“After the first twenty minutes, we were fantastic. It was a chess game. We were not committing too many numbers forward. We thought we had more special attackers than they did. We knew that once we got chances, we could be more deadly than they were.”

On Friday, Marshall will face two-time national champion North Carolina in the semifinals. Pittsburgh and Indiana will square off in the other semifinal.

“They are very similar to Charlotte, who is in our conference,” Grassie said. “I think it is a very winnable game for us, for sure.”

In their second NCAA Tournament appearance, Marshall has proven itself among the best programs in the sport.

“What ACC teams try to do is get you to buy into their record of that we are the best, this is the soccer conference, we are the powerhouse and you guys are mid-majors. As soon as you buy into that, as soon as you recognize your place in the world and say, ‘Hey, I am happy to be at a mid-major’, you are dead.

“We have said from day one that we are going to be the best team in the country. We want to win it. We have guys from academies all over the world.”

In sixteen matches this season, the Herd has conceded just eight goals.

In a college sports year turned upside down by the pandemic, the soccer season has been flipped from the fall to the spring. The entire NCAA tournament has been contested at a single site in Cary, N.C. Grassie believes his squad has adjusted to the changes very well.

“With us all being vaccinated now, this has been a lot less stressful. It has been more normal and we have gotten to hang out and socialize, sing songs together, eat meals together. We are really enjoying the company of each other. It is like a self-sustaining environment because we can enjoy each other’s company.”