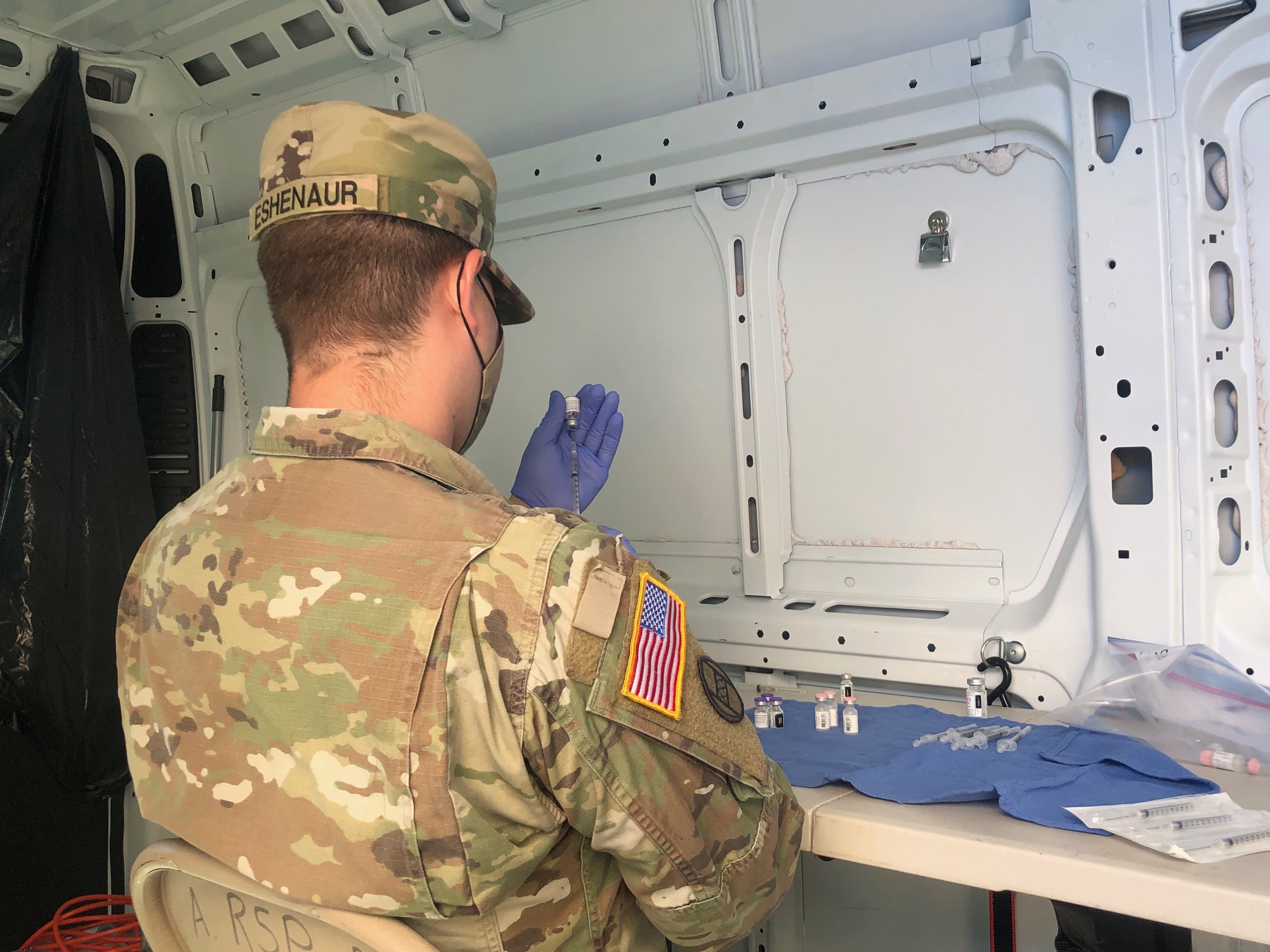 A member of the Joint Interagency Task Force gets the COVID-19 vaccines ready on Thursday.

CHARLESTON, W.Va. — On the first full day that West Virginians between the ages of 12 and 15 were able to receive a vaccination against COVID-19, dozens took advantage in the Charleston area.

“We’ve got that approval and a lot of parents are taking advantage of it. They are bringing their kids down,” Snedegar said.

The West Virginia Department of Health and Human Resources (DHHR) announced Wednesday that those 12-15 years old were able to receive the Pfizer vaccine following the decisions by the U.S. Centers for Disease Control and Prevention as well as the Food and Drug Administration to authorize the vaccine’s use among younger people.

Snedegar’s crew, which is the Central team in the JIATF mobile clinic plan, has been to multiple events throughout Charleston but the Lottery building site was their first time there. He said his team covers Clarksburg and into southern West Virginia. Half of his team conducted a similar vaccination event in Huntington on Thursday and reported young people there.

He said he was happy with the turnout because teenagers are a key demographic to slowing the virus. He added many parents bringing children to the drive-thru were already vaccinated.

“They are out, they are active, they are in activities and out with their friends doing things in groups,” Snedegar said of teenagers. “They can be carriers and not necessarily have issues with COVID itself. They can get positive and it normally doesn’t entail hospitalizations or severe illness, but then they can be carriers and bring that back to grandma and grandpa.”

The team will be back in the area for a return mission in three weeks for anyone who received a vaccine that needs a second dose. Teenagers are only allowed to get a Pfizer shot, which a second dose is recommended.

The clinic at the Lottery Building is also open Friday from 9 a.m. until 5 p.m., the same time as Thursday. No appointment is necessary and all three brands of vaccine will be available.

Elsewhere in Charleston on Thursday, the Kanawha-Charleston Health Department (KCHD) vaccinated teenagers between 12 and 15 years old for the first time. The Kanawha County Commission said the first young person vaccinated  at the event was a local Kanawha County teen named Houston, making their theme “Houston…we have a solution!”

This morning, @KCHealth1 held a news conference sharing upcoming vaccine clinic details and getting the first few 12 to 15-year-olds vaccinated with the @pfizer COVID-19 vaccine after being approved by the @CDCgov yesterday for ages 12 and up. pic.twitter.com/jfnddvX92X

The KCHD reported to MetroNews this week that 1,400 young people 12-15 years old have signed up to receive a shot next week in the schools. The health department already vaccinated a few thousand teams at high school events in April for those 16-18 years old.

Young people have been the key demographic for vaccinations by Gov. Jim Justice and his administration in recent week. He said on Wednesday that he is giving anyone 35 years of age and younger a $100 gift card for getting a shot.

The state’s vaccination rate has slowed in recent weeks after leading the country in shots early in the process. Snedegar said he’s noticed the slowdown at his clinics.

“We saw this go along with the swabbing efforts. Initially, we were really busy doing the swabbing last year and then as the year progressed it slowed down,” he said.

Justice has said the state’s mask mandate will end on June 20, when state health advisers project 65 percent of all West Virginians 12 years of age and older will have been vaccinated. 687,720, 38.4%, of West Virginians have been fully vaccinated as of Thursday, according to the DHHR.