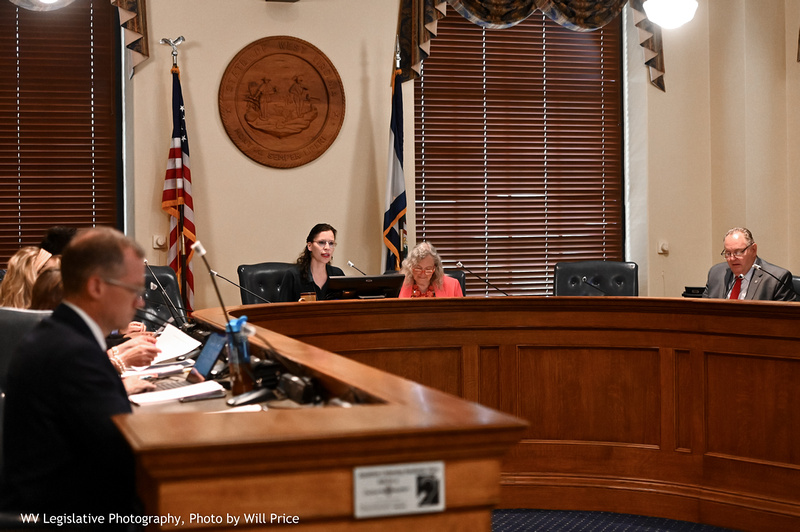 Members of the Joint Committee on Children and Families hear about the state's foster care system. (Will Price/West Virginia Legislative Photography)

The Marion County couple took a friend’s one-year-old child into their home that already included six additional children. The couple appeared over an internet streaming service to tell lawmakers about lack of communication from the state, inconsistent visit schedules and an unnecessary amount of bureaucracy.

“The amount of stress and requirements that the state expects these parents to come up with and deal with — and the inconsistencies within the process itself; the uncertainty of day-to-day life — is exhausting,” Andrew Tennant said.

“It seems like foster parents are basically used for the purposes of ‘We have all these kids. There’s 7,000 kids in the system. We have to do something about that as a state. Well, how do we do that?’ I understand that’s the question you’re trying to answer. But in so doing you’re relying on people who are volunteering. When volunteers step up and say I’ll do it, they’re then being walked all over.”

Foster care was a central topic today for meetings of the Joint Committee on Children and Families and then of the Joint Oversight Commission on Health and Human Resources Eligibility. Legislators today heard a range of suggestions for trying to improve the system.

Of the thousands of children in the system, 84 percent are in a “family-like setting,” Linda Watts, commissioner for the state’s Bureau for Children and Families.  “We want that number to go higher, but we realize we’ve got to continue to build capacity around that,” she said.

She said 3,809 with kin or relatives, while 1,995 children are in child-placing agency homes.

Leadership at the Department of Health and Human Resources has decided to split the bureau that deals with child welfare issues into two, Watts said. She said a timeline isn’t certain yet.

One will be the Bureau for Family Assistance and Support, which will administer family assistance programs.

The other will be the Bureau for Social Services, which will manage protective services.

“Those are big reforms for us this year,” said Watts, who acknowledged that she is retiring in July.

“When you put children in the middle and you work around them,” she said, “you can only do great things.”

The system has plenty of ways to improve, the state’s foster care ombudsman told lawmakers. Pamela Woodman-Kaehler was going over the findings from an official report from her first months on the job.

She told lawmakers that her office has received about 500 complaints since she was appointed to the ombudsman position a little less than two years ago.

She said many parents expressed fear of speaking out or fear or retaliation. She said 90 percent of people who contacted the ombudsman’s office feared contacting anyone else because of their past experiences.

“The fear cripples the communication that is necessary among everyone in the child’s case,” Woodman-Kaehler said.

Some people view the system in terms of its authority, she said.

“I don’t like to compare the child welfare system to law enforcement, but that is the way the public views us,” Woodman-Kaehler told lawmakers.

She noted that complaints are not just about the Department of Health and Human Resources but were about various stakeholders within the foster care system.

“I want to increase the regularity of meaningful information exchange,” Woodman-Kaehler said.

Ongoing efforts, she said, should focus on “taking the veil of secrecy off of what we do. Becoming a little less threatening and intimidating.”

Cammie Chapman, associate general counsel for DHHR, acknowledged all those concerns but also said officials are working through the issues.

“The child welfare system is stressed. This is true for West Virginia but it’s also true across the nation.”

Chapman noted that 90 percent of complaints were resolved by low- to mid-level interactions. “To me this means our staff was responsive,” she said.

“Our workers must be the calmest voice in the room.”

She described ongoing efforts to recruit workers for the child welfare system, including increasing salaries and adding 202 positions. Those efforts continue with salaries and number of positions studied over the next year.

Still, 90 percent of districts have vacancies, she said. Right now, there are 124 vacancies statewide.

Assessing that is complicated, Chapman responded.

“We keep increasing the number of positions,” she said, “so that has been keeping our vacancy rate at a higher level.”

Senator Ron Stollings, D-Boone, emphasized the need to deal with the fear that was described among people who participate in the child welfare system.

“We hear fear today, and that’s something that has to be dealt with,” Stollings said.