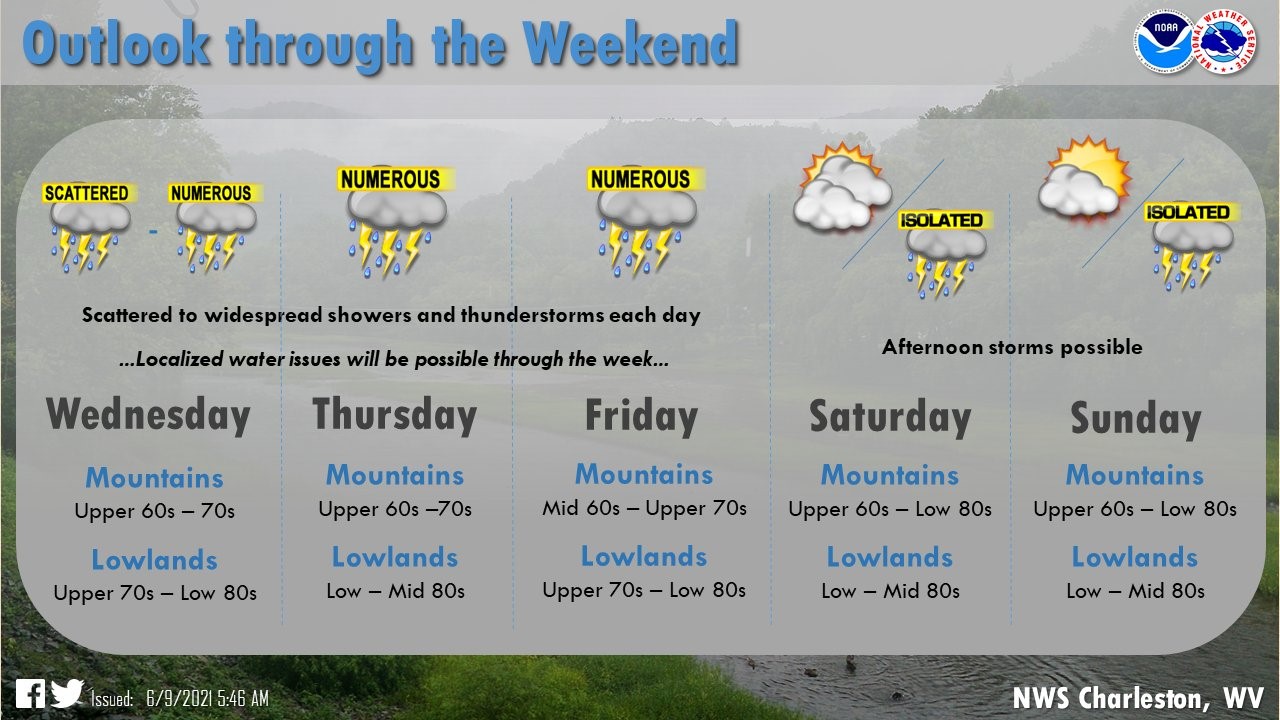 CHARLESTON, W.Va. — The muggy and humid conditions West Virginia has experienced for weather this week continue to create pop up showers and thunderstorms. Although mostly isolated, those storms are starting to add up.

“We are getting more water logged, some parts of the state especially around the Ohio River and the New River Gorge have received anywhere from four to six inches of rain over the last few days,” said Robert Hart, Lead Forecaster for the National Weather Service in Charleston.

The source of the humidity can be traced to a strong flow of Gulf of Mexico moisture funneling into the state. The pattern is being held in place by a high pressure system off the east coast. The humidity has created the right conditions for daily storm activity. The pattern will be in place through late Friday and in that time could create possible flash flooding.

“Any one of these showers or storms could create one to two inches of rain which could unfortunately lead to high water issues,” he explained.

A Flash Flood Watch is in effect for portions of WV, SE Ohio, and NE KY for this afternoon through early Friday evening.

Occasional rounds of showers and a few storms are expected.

The National Weather Service issued widespread flood watches for most of West Virginia as well as eastern Kentucky and southeastern Ohio. Hart indicated other NWS offices which cover counties of the northern and eastern panhandles are likely going to be issuing similar watches.

The humid weather is expected to exit the region by Saturday with more seasonal temperatures and dry conditions arriving for the first part of next week.

News
Tug Valley football struggles to get past spring flood
Coach Hady Ford said the facilities are cleaned up, but replacement of the lost equipment and getting materials for repair has been another matter.
By Chris Lawrence
News
Kanawha school board votes to require masks for elementary schools; choice for grades 6-12
The vote on Monday was made in front of a majority crowd wanting no masks.
By Jake Flatley
News
Damage assessment underway following second Morgantown high water event
Officials hoping to get FEMA help after 50-100 homes, businesses impacted.
By Mike Nolting
News
Justice says non-vaccinated taking risk at upcoming large events
But governor says he's not yet ready to mandate anything when it comes to masks.
By Jeff Jenkins
View AllHoppy's Commentary