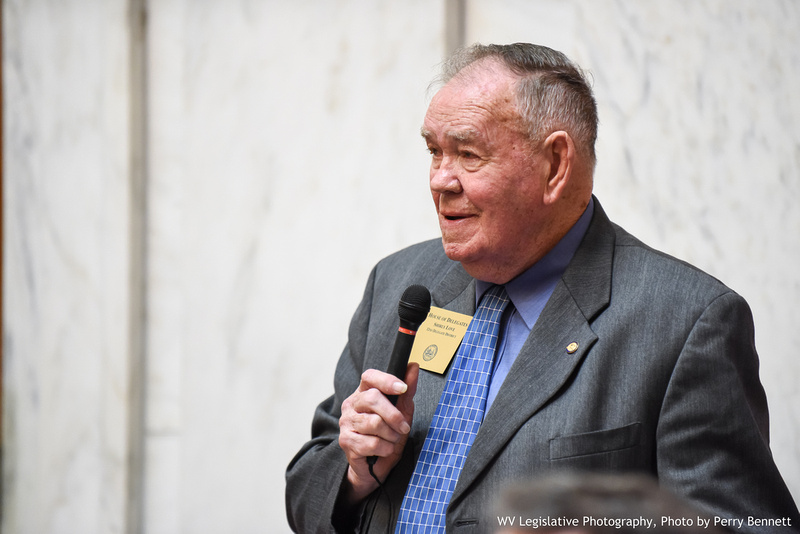 Shirley Love speaks on the floor of the House of Delegates. (Perry Bennett/West Virginia Legislative Photography)

The “Senator Shirley Love Memorial Road” was established with a ceremony Friday along Gatewood Road in Fayette County, where Love made his home. The original name, Gatewood Road, remains but signage will encourage community members and drivers to remember Love’s contributions.

Gatewood Road connects Fayetteville and Oak Hill, so the naming is a fitting symbol of community connections in Fayette County. The road is also considered to be County Route 9 and County Route 14

“He spent a lot of his time on Gatewood Road. He lived there. He raised his family there. A lot of the work that was done during his time in elected office, a lot of that work was done from Gatewood Road, so I thought that would be a fitting road,” said Delegate Austin Haynes, R-Fayette, who led the effort to honor Love with the road.

Haynes represents a different party than Love, a Democrat, did during his many years in the Legislature. But Haynes, like many who knew Love, expressed admiration for his fellow community member and legislative predecessor.

“We were on different sides  of the aisle but over the last couple of years that Shirley was with us, we had a chance to get to know each other better,” Haynes said. “He was always full of advice and words of wisdom.”

Love is best known for his days as a broadcaster, spanning more than five decades.  He worked for WOAY in both radio and television from 1954 to 1997.

Love did the “Juke Box Review” for more than 20 years on radio. He was the voice of Oak Hill High School football and basketball games from 1954 until the early 1990s.

He also hosted the “Friday Night Barn Dance,” which featured local country and western musicians every Friday night — and another similar show on Saturday afternoon called the “West Virginia Jamboree.”

Perhaps he is most fondly remembered for broadcasts of “Saturday Night Wrestling,” pronounced “rasslin’”

Love eventually retired from broadcasting and went into sales for WOAY and then into state politics. He is also a member of the West Virginia Broadcasting Hall of Fame.

Honoring him with a road meant getting a resolution passed this year during the regular legislative session. Given how fondly people remember Love, it wasn’t hard. The resolution has a bipartisan list of sponsors filling six lines on the Legislature’s landing page.

“Whereas,” the resolution states, “early on, Love’s engaging, ever-present smile won him many lifelong friends and he quickly built a reputation in the state Legislature as a tireless worker, always willing to listen to the concerns of his constituents.”

The resolution continues that way, expressing admiration for Love’s singing voice and his colorful and productive life before finally resolving that signs in his memory should be placed at both ends of Gatewood Road.

A few weeks were needed to prepare the signs. This past Friday, a ceremony allowed family and admirers to see the installation of signs marking the “Senator Shirley Love Memorial Road.”

“It’s nice to see the signs up now,” Haynes said. “He deserved it, and the family deserved it too.”