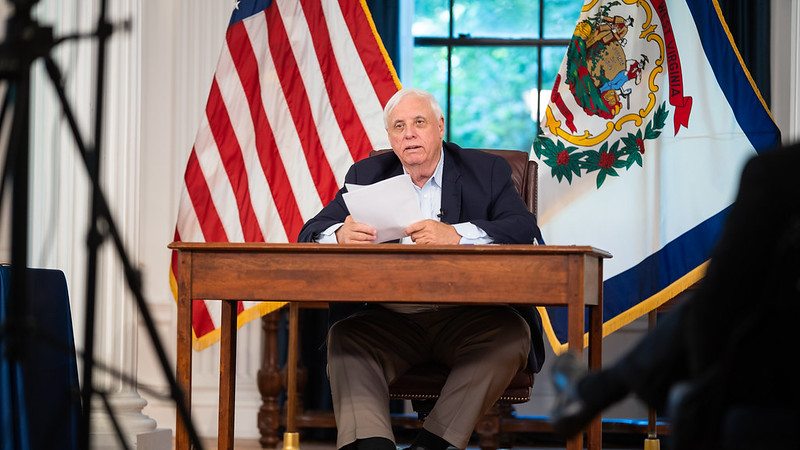 After more than a year of caution and sorrow, Gov. Jim Justice is ready to party.

The state is marking the annual West Virginia Day, which celebrates the state’s admission into the Union, with a big giveaway to vaccinated state residents. The celebration will be June 20.

During a briefing today, Justice described an extravaganza at 1 p.m. that Sunday officially ending West Virginia’s mask mandate and drawing for a variety of prizes.

Justice noted that the deadline for the first drawing is midnight Wednesday.

West Virginia residents who have received at least one dose of covid-19 vaccine are eligible. Registration is available online.

The state’s website reflects seven rounds of giveaways, up until August 4.

“If you‘re just dilly-dallying around and you haven’t registered you’re blowing a chance to absolutely become a millionaire,” Justice said.

West Virginia, like other states, established the raffles to encourage people to get vaccinated.

Current state statistics show that 955,964 residents — about half the state’s population — has received at least one dose. Only people over age 12 are eligible for vaccination.

For residents above that age, 955,964 have received at least one dose. That’s about 61 percent of the eligible population.

And 784,131 of residents above age 12 are fully vaccinated. That’s about 50 percent of the eligible population.

“We’re going to have a great day on the 20th. You’re going to make me happy knowing that those folks got vaccinated,” the governor said today. “It is a celebration of West Virginia coming back to life.”

Justice provided a reminder today that state residents ages 16 to 35 are all eligible for a $100 savings bond or an equally-valued gift certificate if they get vaccinated. That’s an effort to reward the state’s younger population to get vaccinated.

And the governor said state officials are still considering a financial bonus for people who leave unemployment to return to the workforce. That’s an initiative the governor first mentioned a few weeks ago, but it hasn’t yet come to fruition.

West Virginia is eliminating enhanced unemployment benefits that were established during the pandemic this Saturday night.

So Justice had seen the bonus as a way to reward people returning to the workplace. Originally, he described it as a possible match for private employers offering such bonuses.

“Then we realized real fast that some businesses were all in. But it really put at a real disadvantage folks that were still really struggling. And it put at a bidding war those who are doing great and those who are struggling,” Justice said today.

But, the governor said, “I haven’t abandoned it from the standpoint of state participation.”