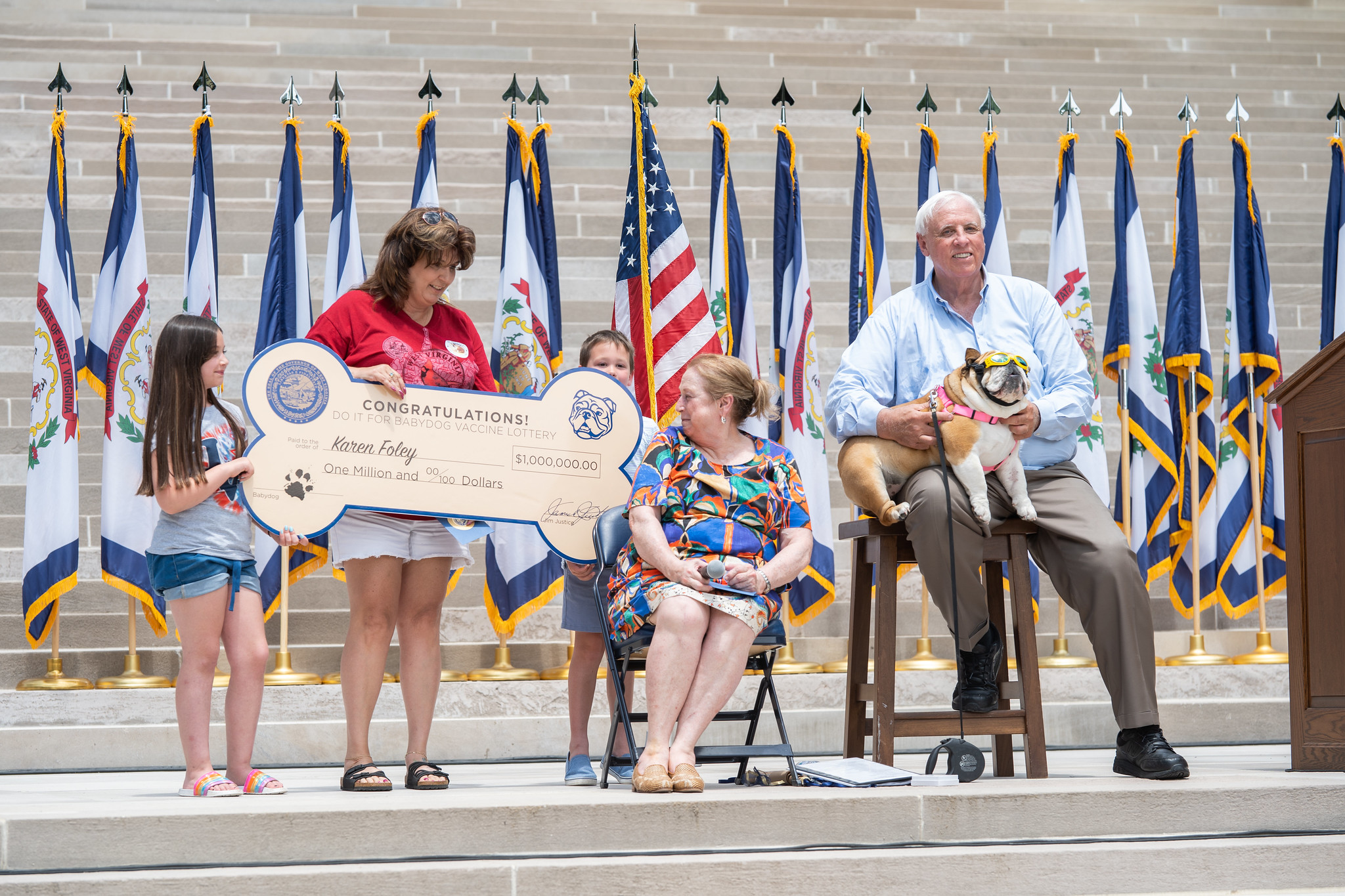 CHARLESTON, W.Va. — Karen Foley made the trip to Charleston from Mineral Wells on Sunday not knowing what she had won in the “Do It For Babydog: Save a life, Change your life” sweepstakes but knew it was something after getting a call earlier in the week from state officials.

Turned out Foley is West Virginia’s newest millionaire, taking home the first $1 million prize on the steps of the state Capitol.

Gov. Jim Justice and First Lady Cathy Justice announced the dozens of winners to the first COVID-19 vaccination lottery on Sunday, West Virginia Day, in Charleston with some winners in attendance.

Foley appeared on Monday’s MetroNews ‘Talkline’ and said she was both overwhelmed and shocked at winning the money. She said there has been mixed reactions elsewhere, especially on social media.

“I have lots of new friends and lots of haters,” she said.

The lottery, named after the governor’s English Bulldog, was an attempt to motivate unvaccinated West Virginians to receive the shots.

Foley said she was vaccinated for COVID-19 before the lottery was announced and she did so for the ‘wise health decision.’

She said she joked around with her dad two weeks ago about winning the $1 million when her dad reminded her to get registered for the lottery.

As for what she is going to do with the money?

“I’m going to help my children a little bit and put most of it in investments and retirement,” Foley said. “Everyone keeps asking me if I am quitting my job and no I am not. I am not quitting my job, I love my job.”

Karen Foley, $1 Million Winner from Mineral Wells, speaks with @HoppyKercheval about winning the jackpot in the first drawing of the “Do it for BabyDog: Save a life, Change a life” lottery. WATCH: https://t.co/yCFQ3nDJuy pic.twitter.com/ClgsNgOHg0

Paugh said on Monday’s ‘Talkline’ and said he had been vaccinated in February.

“My wife and I felt very fortunate to be vaccinated early in February and got our second shot in March. We felt like doing that gave us freedom,” Paugh said.

Paugh said he is not sure what he is going to do with the truck that has an MSRP of over $80,000. He said he has a 2008 Chevy Colorado that gets him around town.

“It’s a tricked-out F-150 truck. I am not familiar with them. It’s extremely nice and has all the bells and whistles from what I saw,” he said.

One of the other marquee prizes announced on Sunday were two full four-year college scholarships to any West Virginia institution. Rebecca Osborne of Hurricane, who just finished her junior year at West Virginia Wesleyan was one of the two recipients.

Osborne said she was encouraged by her parents to enter the lottery and hopes to use it for her senior year and potentially graduate school. She said she would be in contact with officials from the state this week to determine how it would work.

“My mom and dad signed up and they said I should go for it. Then I did and it turned out nicely,” Osborne said on ‘Talkline.’

Osborne just finished the junior season as a tennis player at West Virginia Wesleyan College. She said she got the vaccine prior to the announcement of the lottery for her season and health.

“I am a tennis player at my college and I wanted to make sure that I would be able to play the whole season and not have to worry about COVID at all,” she said.

The full list of prize winners announced on Sunday:

West Virginians who are 12 years older and older can receive vaccine doses.

Additional lottery drawings will take place weekly. The final drawing will take place on Aug. 4, in which there will be a grand prize of $1.588 million and a $588,000-second prize.

Sunday also marked the end of the statewide mask mandate. The governor altered the order in May to require only unvaccinated West Virginians to wear facial coverings in public settings.