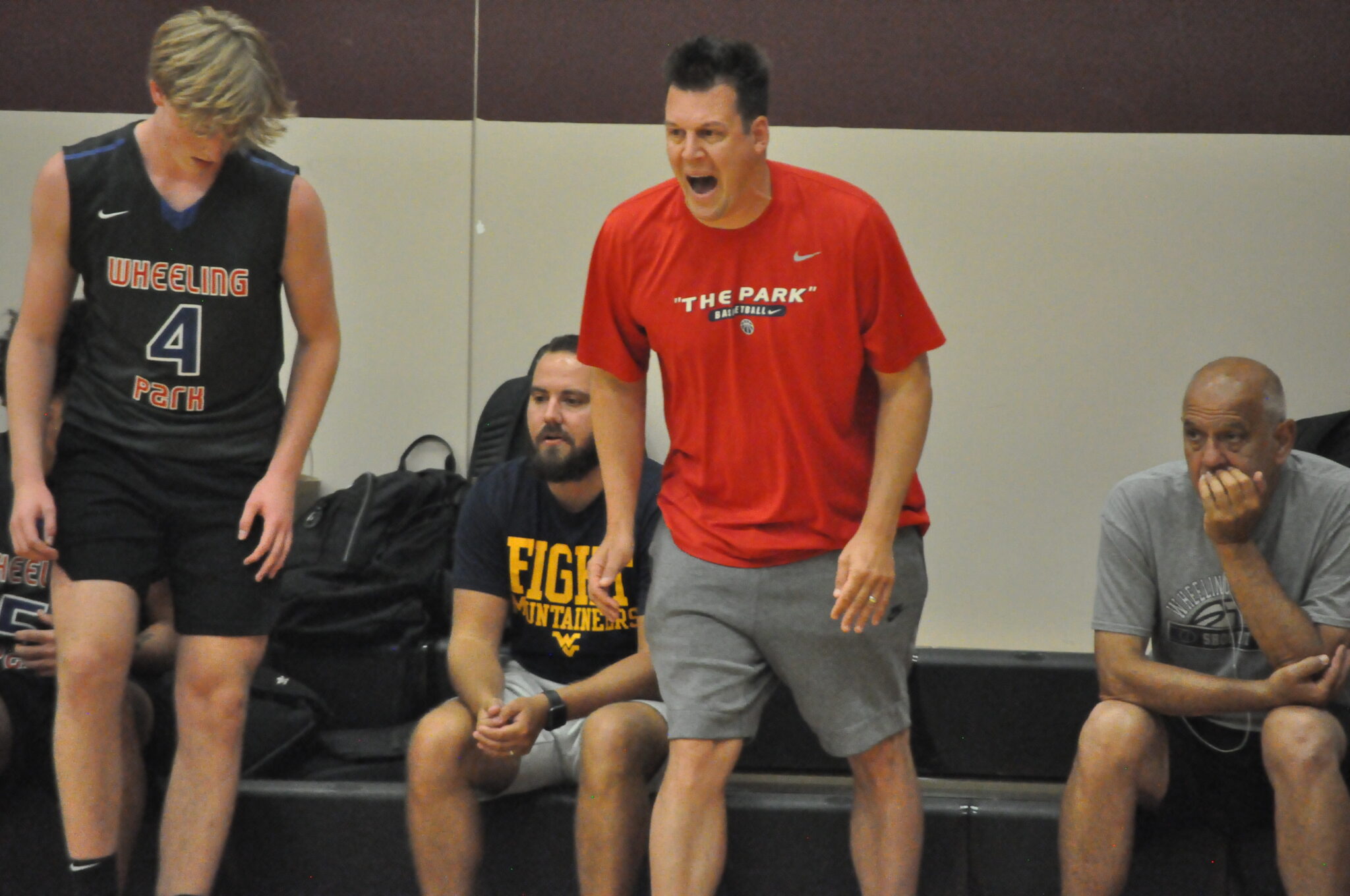 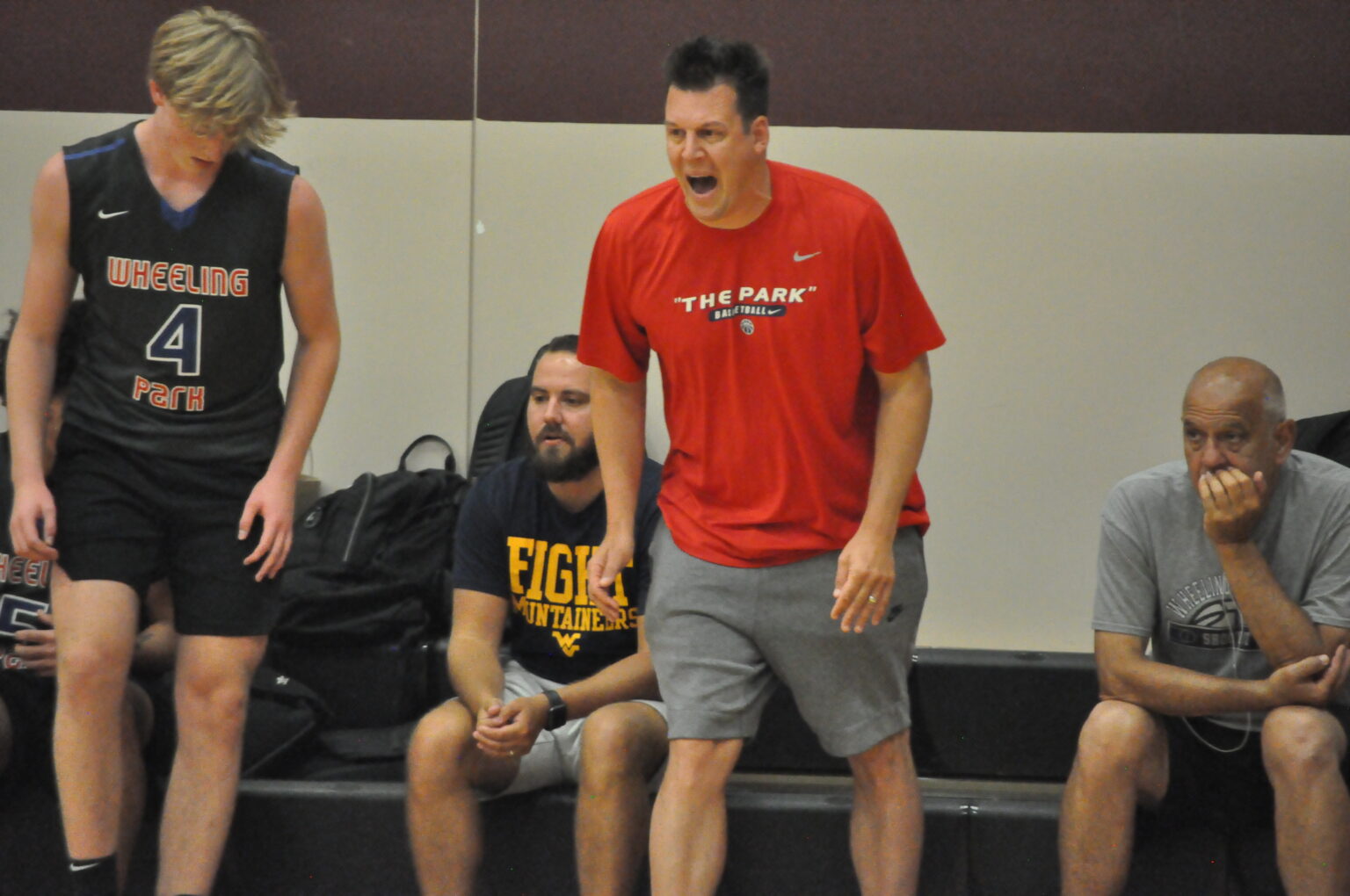 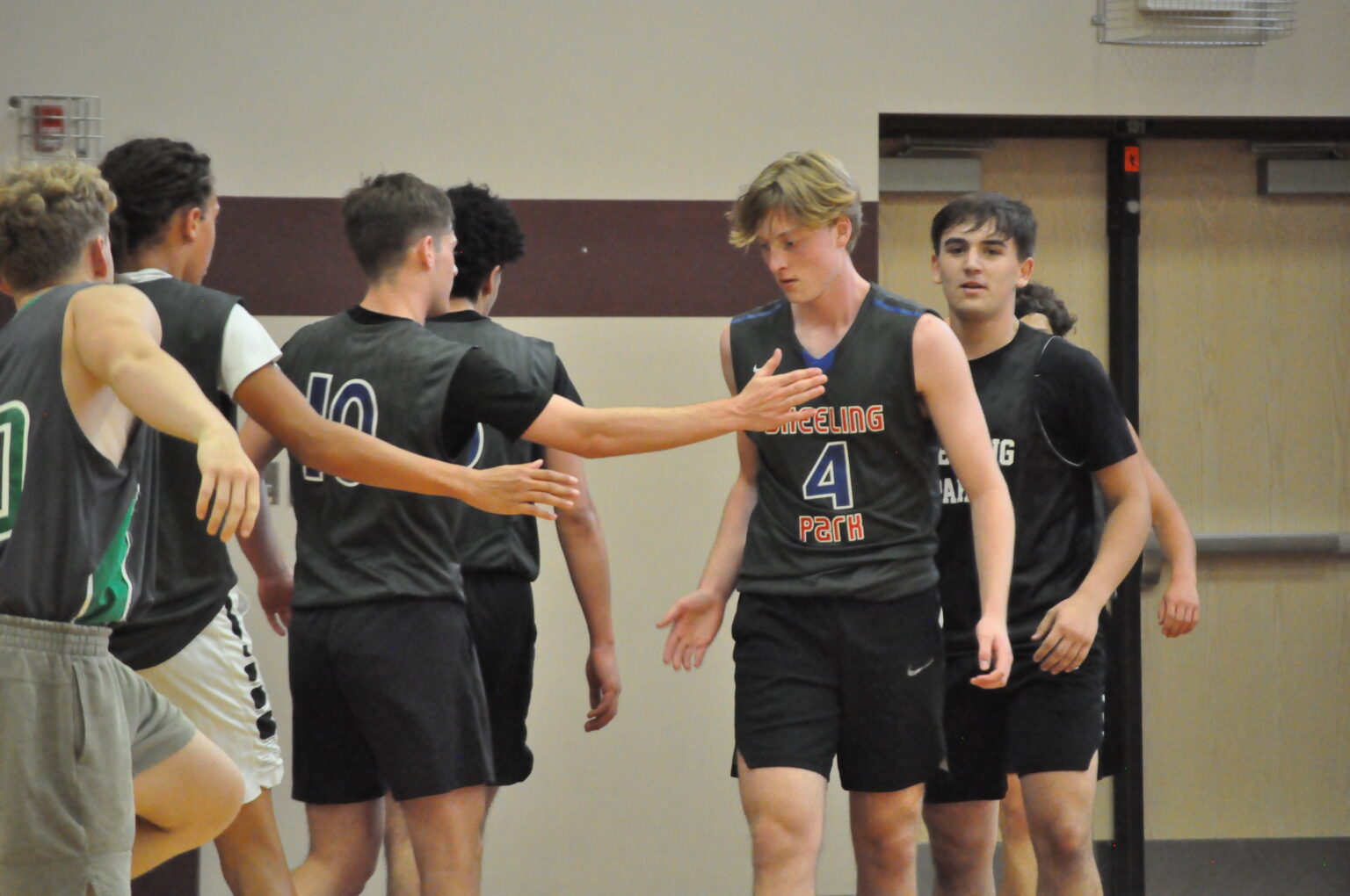 Wheeling Park players support one another during the Cougar Shootout. Photo by Greg Carey/WVMetroNews.com 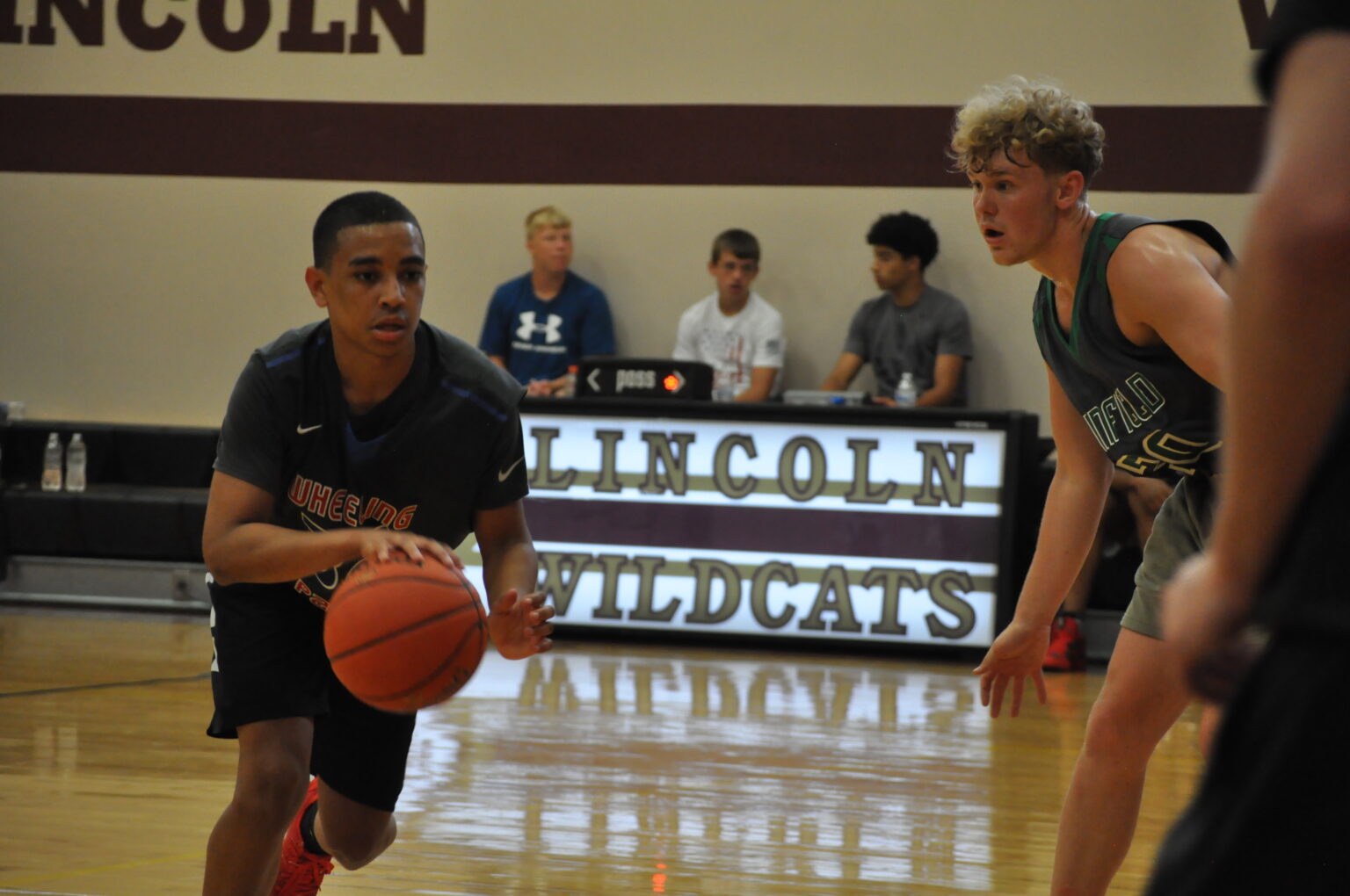 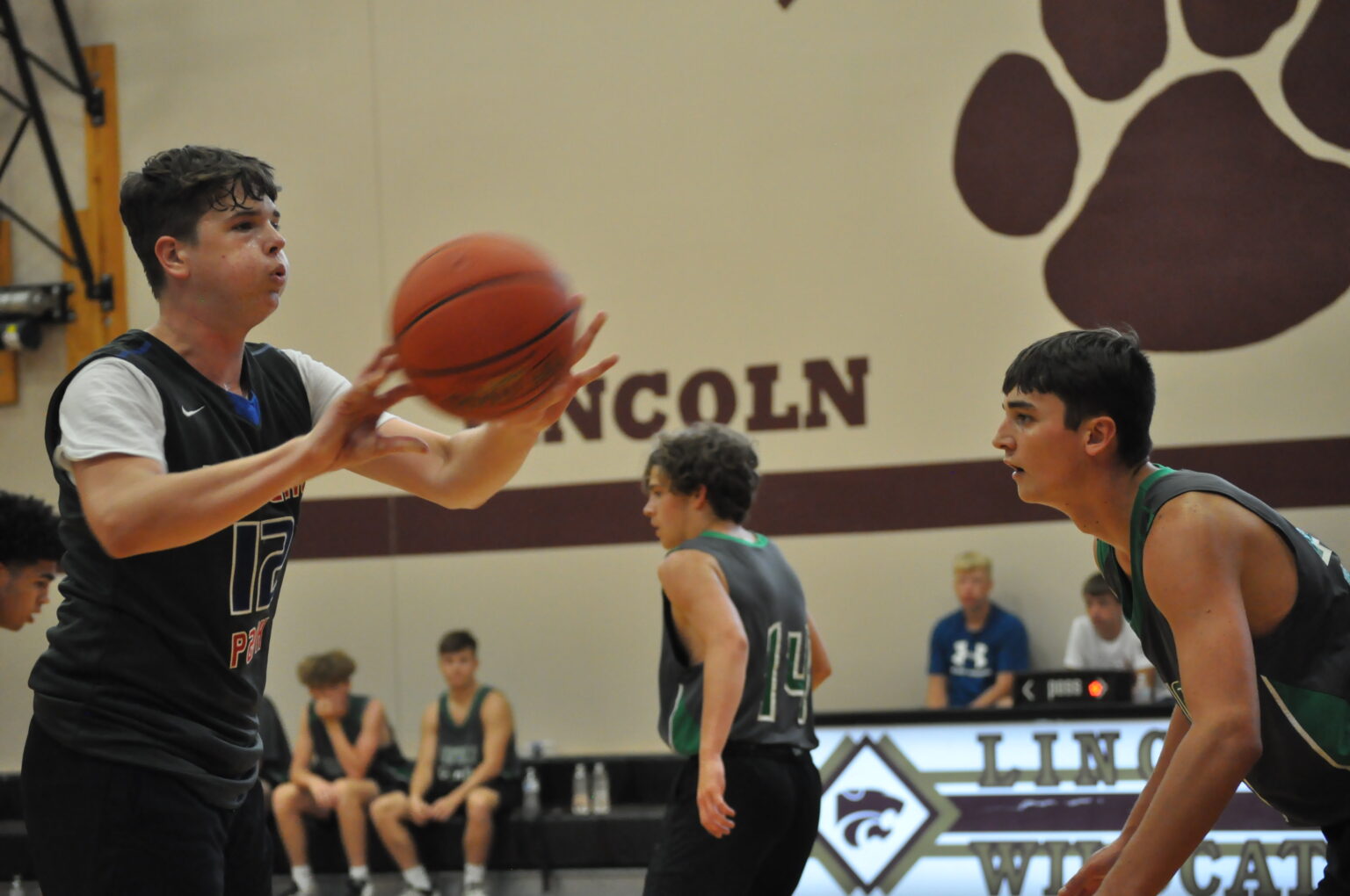 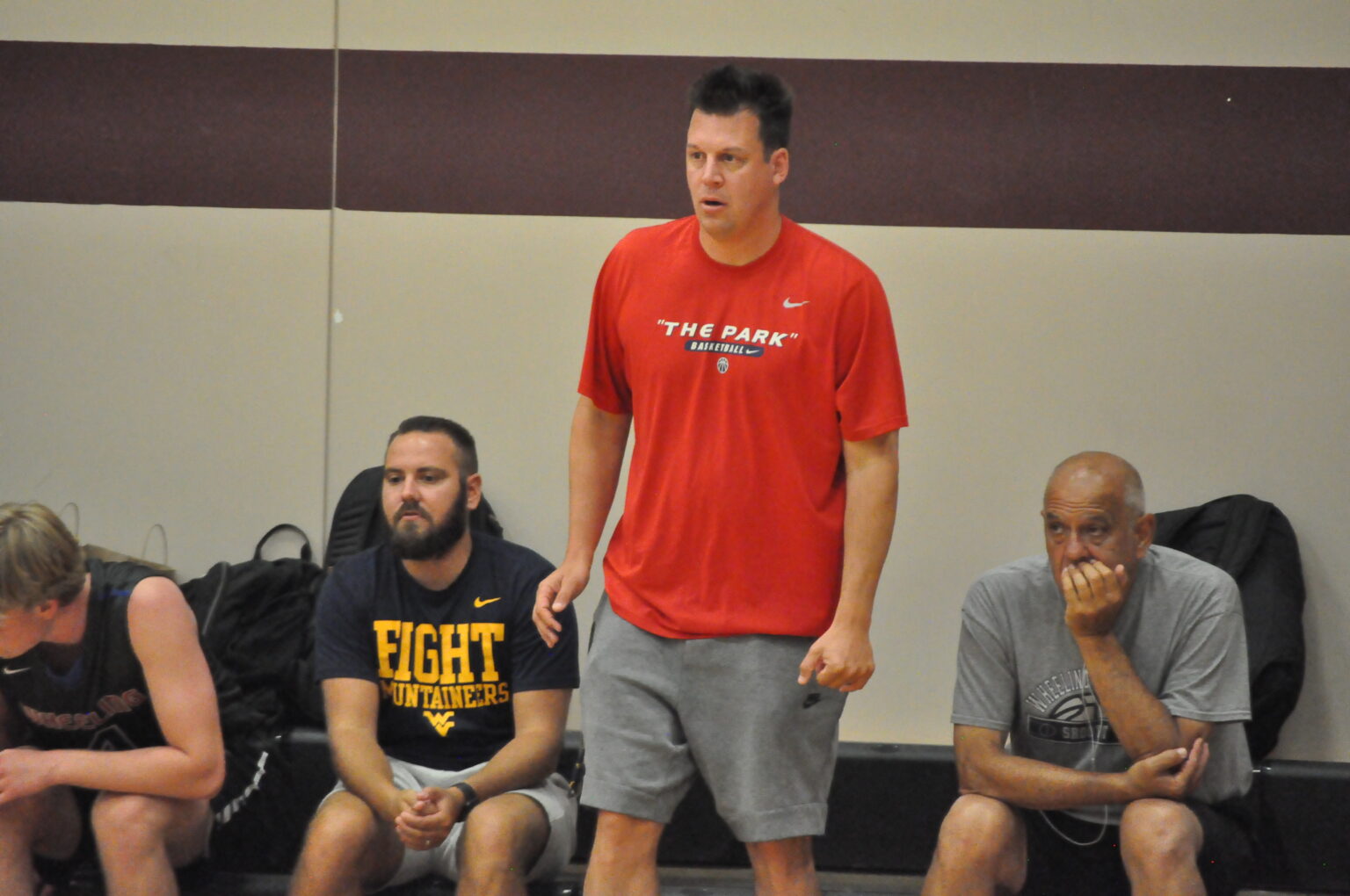 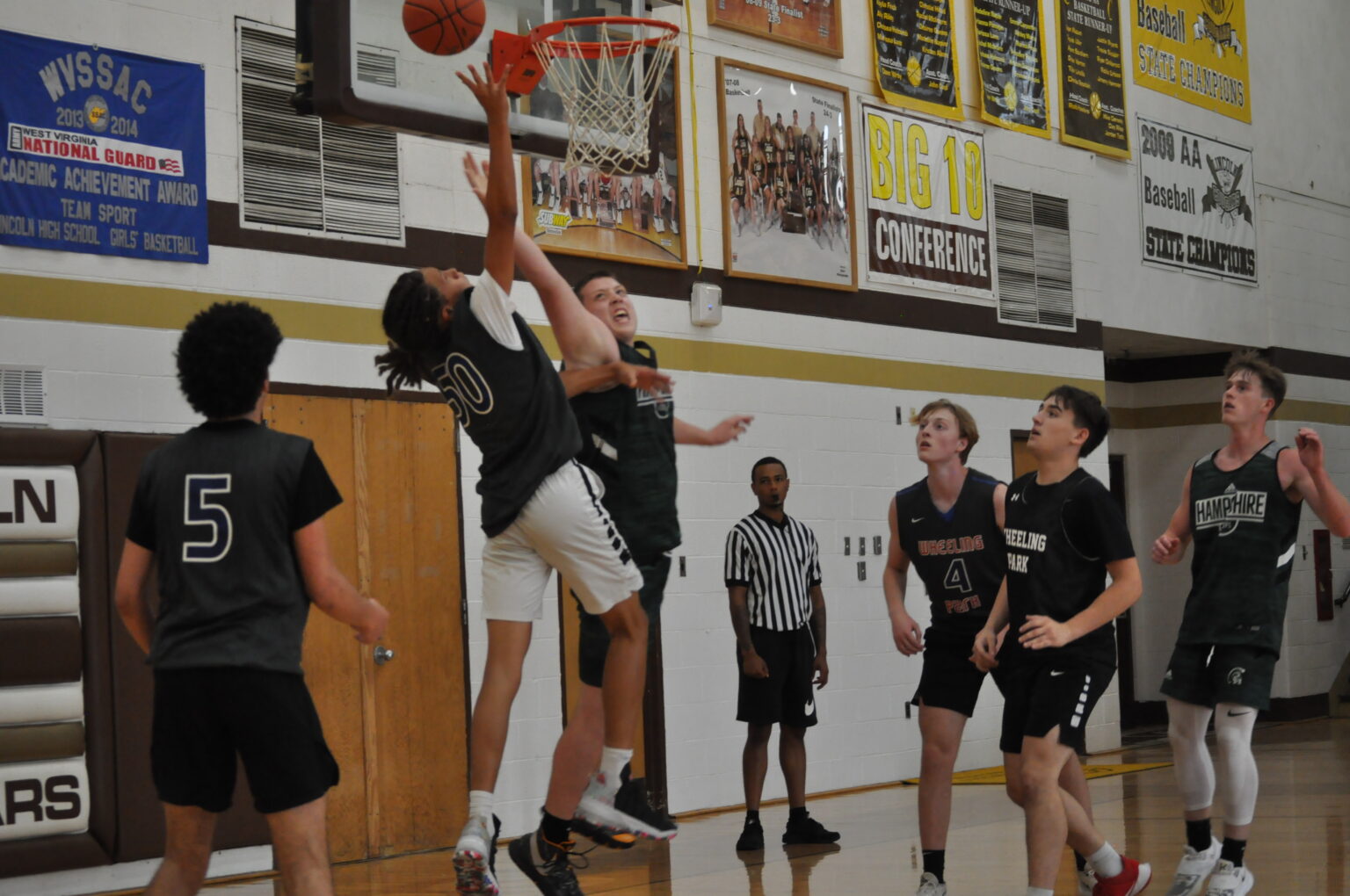 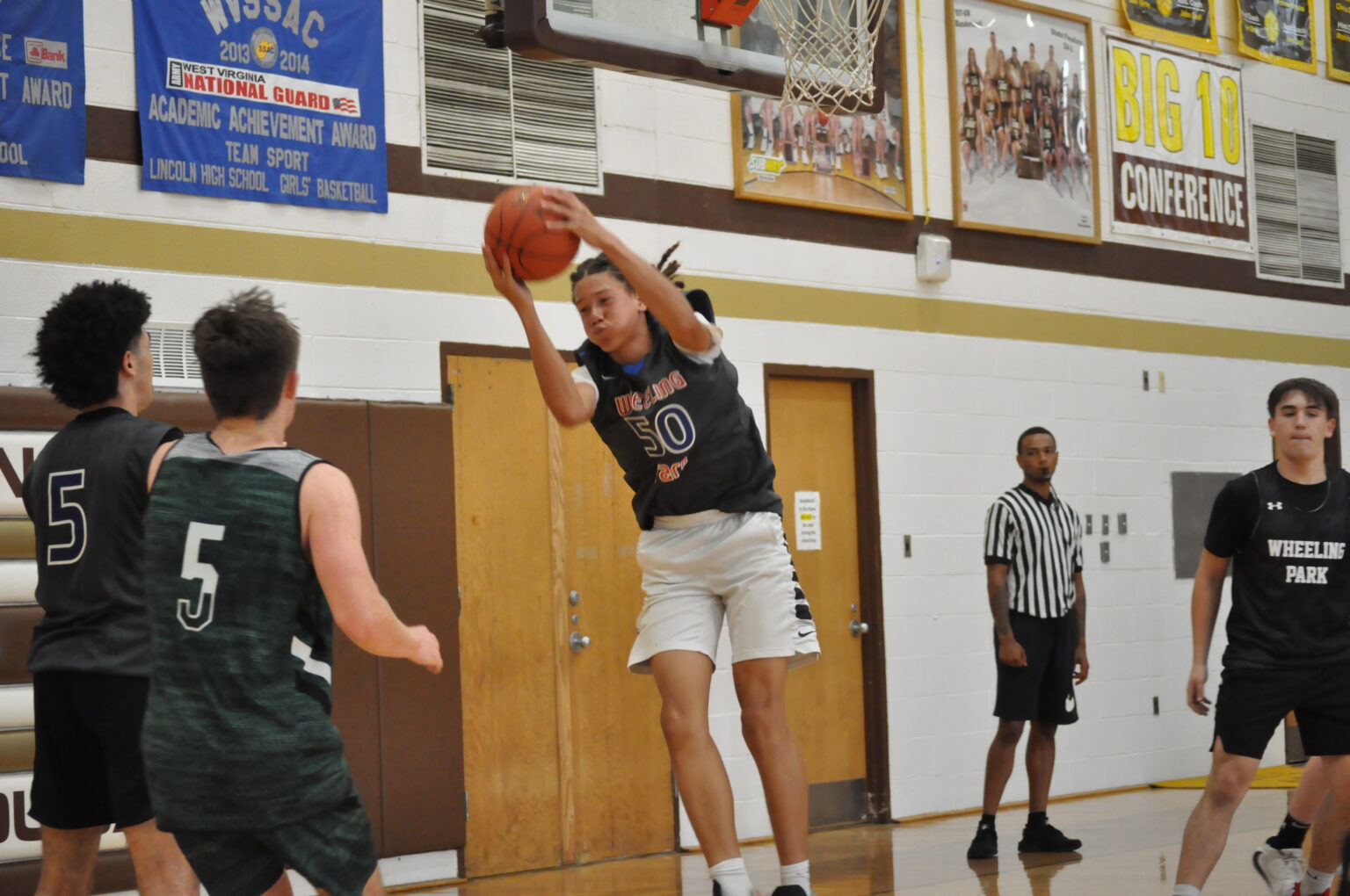 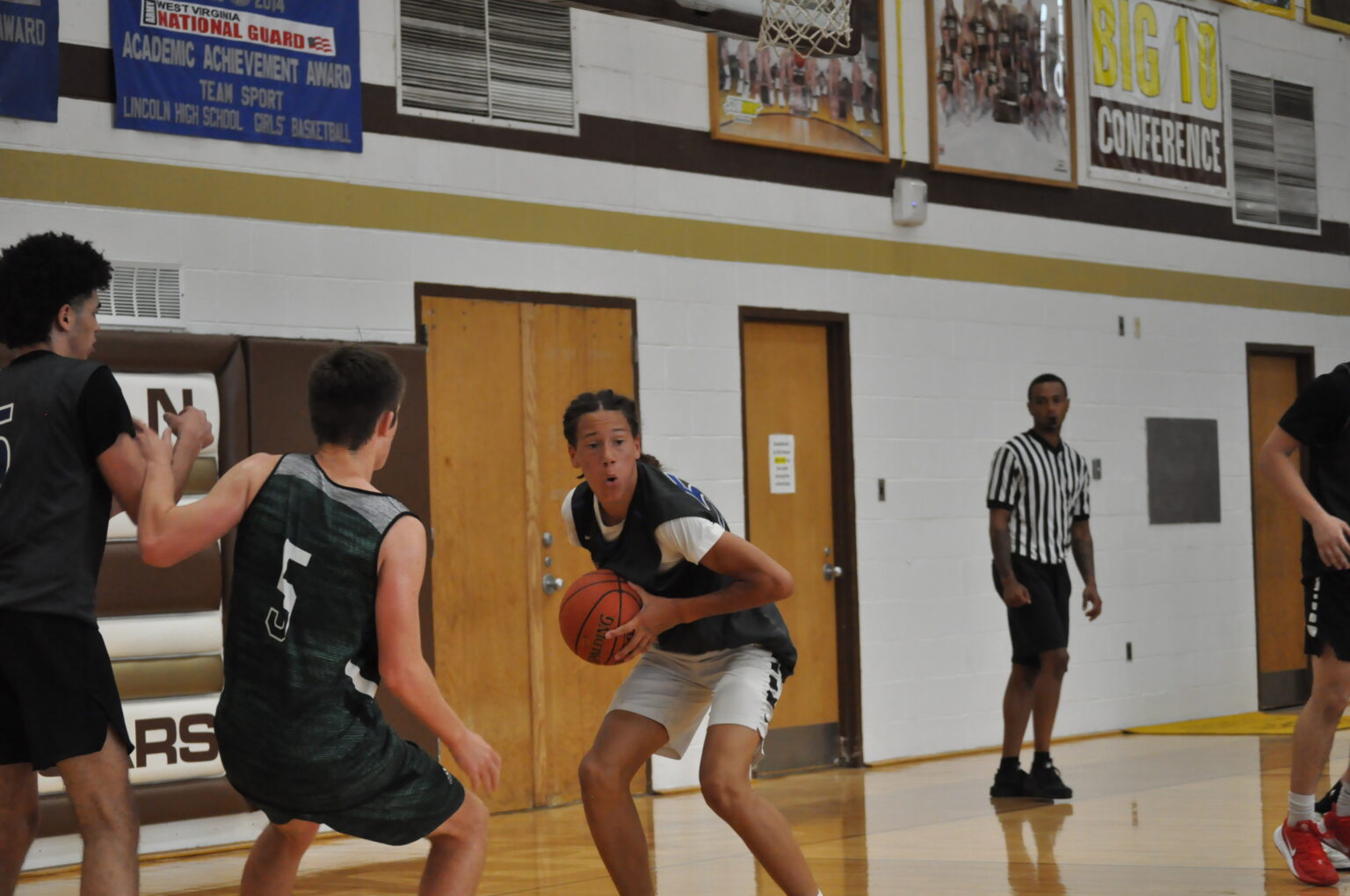 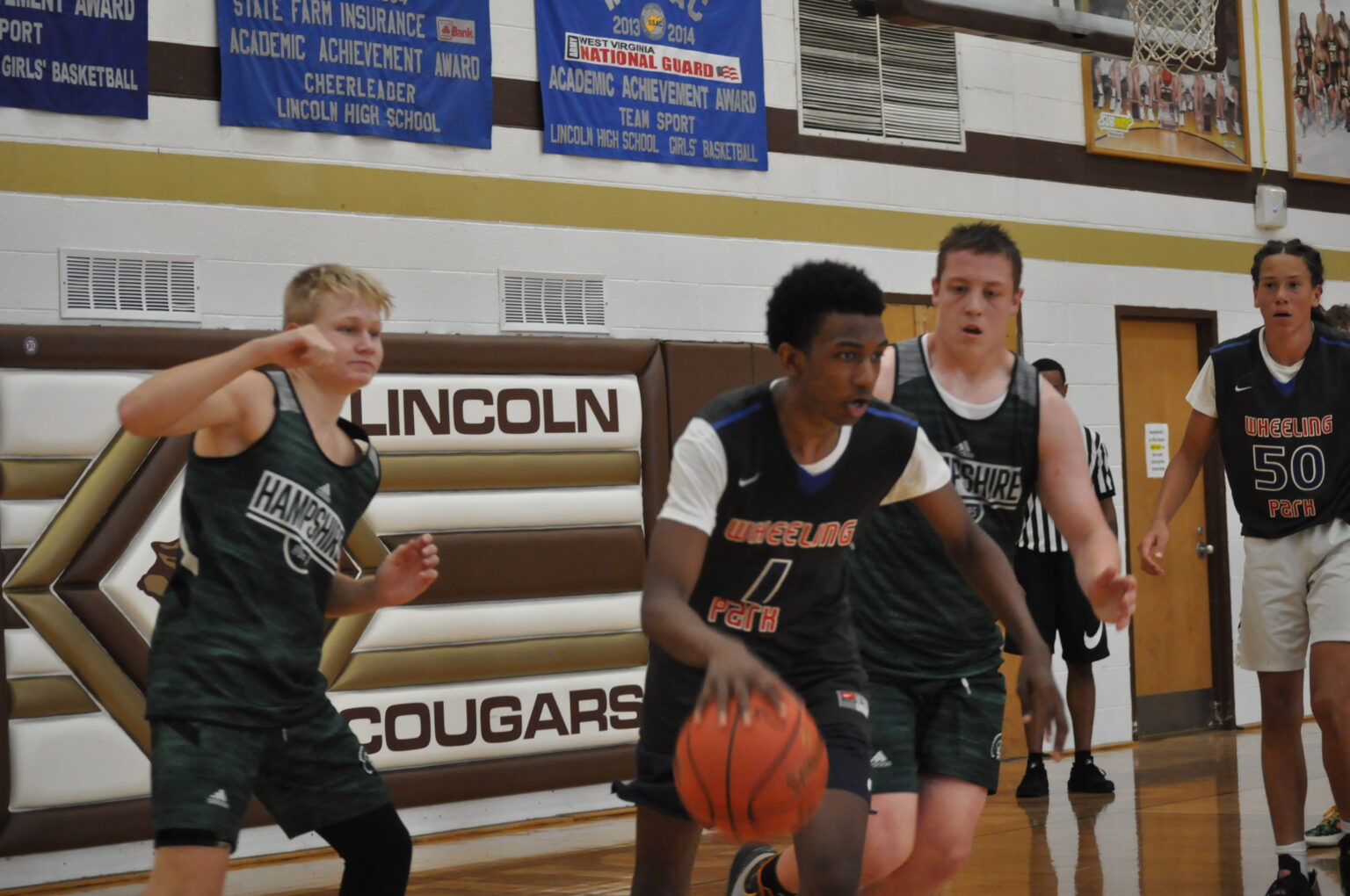 SHINNSTON, W.Va. — Michael Jebbia had previously never taken his Wheeling Park boys basketball team to the annual Cougar Shootout at Lincoln High School, an event over the three-week workout period allowing 12 teams across the state to each play three games on a Saturday.

With the Patriots having graduated six seniors off last season’s team and using the offseason for players with less experience to get their feet wet, Jebbia figured what better time than now than to make the two-hour trip to Harrison County.

“We played some games in June with flex days, but it’s a little different having it in July,” Jebbia said. “We’re graduating six seniors and four starters, so we have a lot of kids getting their first experience. We got to come here and play three games against teams we don’t usually see. It’s a very well-run shootout. (Lincoln) Coach (Jordan) Toth did a great job with it and it’s the first time we’ve been here.

“The three-week period is for a lot of these guys who maybe they’re coming off the JV or haven’t played much varsity, just to get experience and try to get them a lot of reps.”

Wheeling Park took on Logan, Winfield and Hampshire at Lincoln. Jebbia was more concerned with seeing improvement and development from players who will be asked to assume a bigger role next season.

“It’s good to see some teams from other parts of the state,” Jebbia said. “We played Logan in the finals one year (2010), but we not have played Logan in quite some time. We’ve never played Hampshire and then Winfield, we’ve played, but it’s been a while. We brought eleven guys and we had a couple injuries, but our guys got a lot of valuable playing time.”

WPHS narrowly missed out on qualifying for the Class AAAA state tournament last season after suffering a three-point loss at University in a regional co-final.

But the Patriots, who finished 10-7, will be attempting to replace a trio of guards — Avery Lee, D.J. Saunders and Beau Heller — that made up a good chunk of the team’s offense and were primary ball handlers. Lee earned second-team all-state honors as a senior, while Saunders and Heller were honorable mention picks.

Jebbia plans to have his team continue getting game reps, including a shootout Park will host at the Highlands Sports Complex in Triadelphia that will allow them to welcome Brooke, East Fairmont, St. Marys and Madonna.

“We have another shootout coming up, some practice sessions and we’ll keep getting better,” Jebbia said. “We’ll bit in a little bit of a rebuild mode, but we have some size and some good kids.”