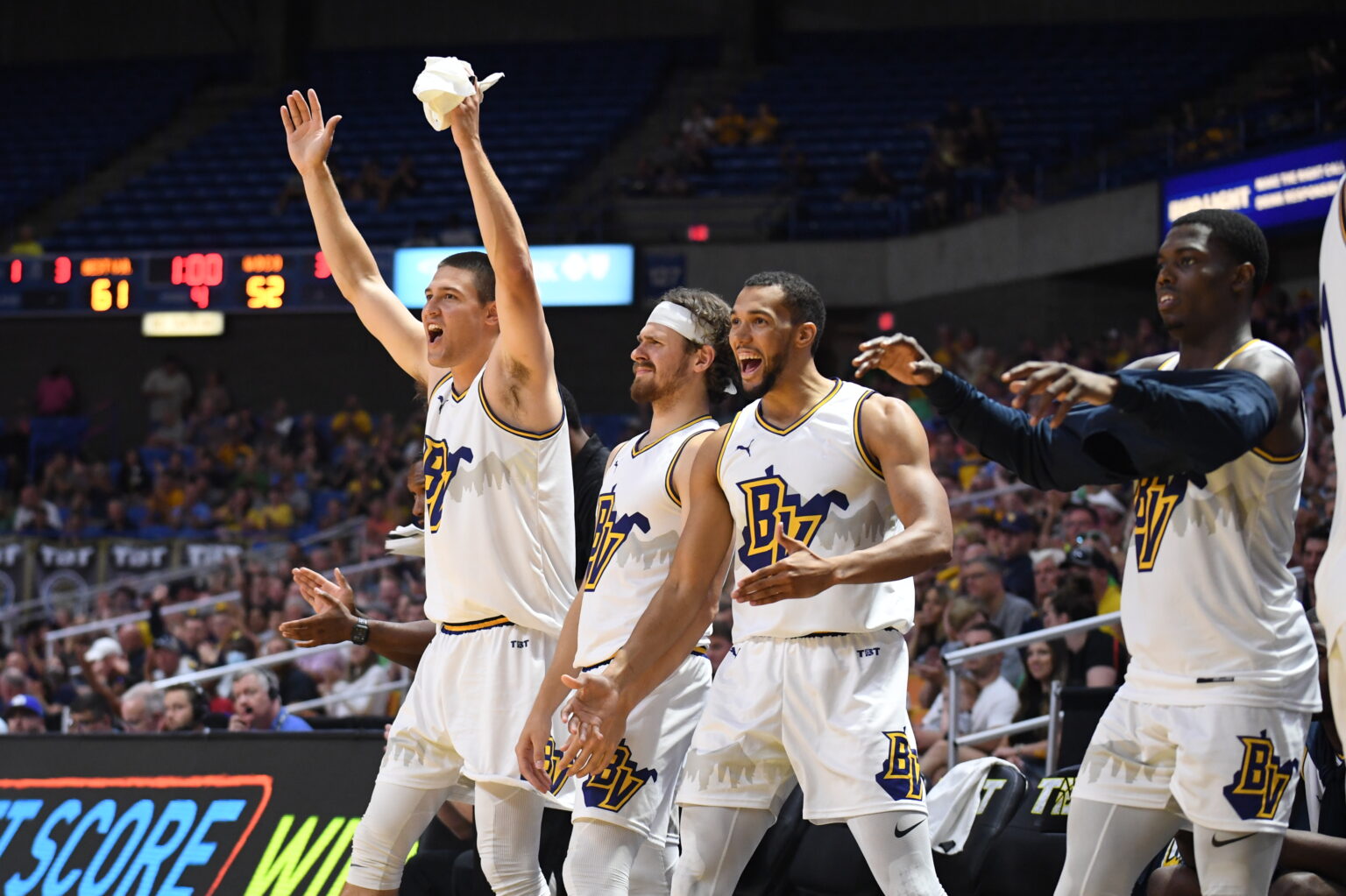 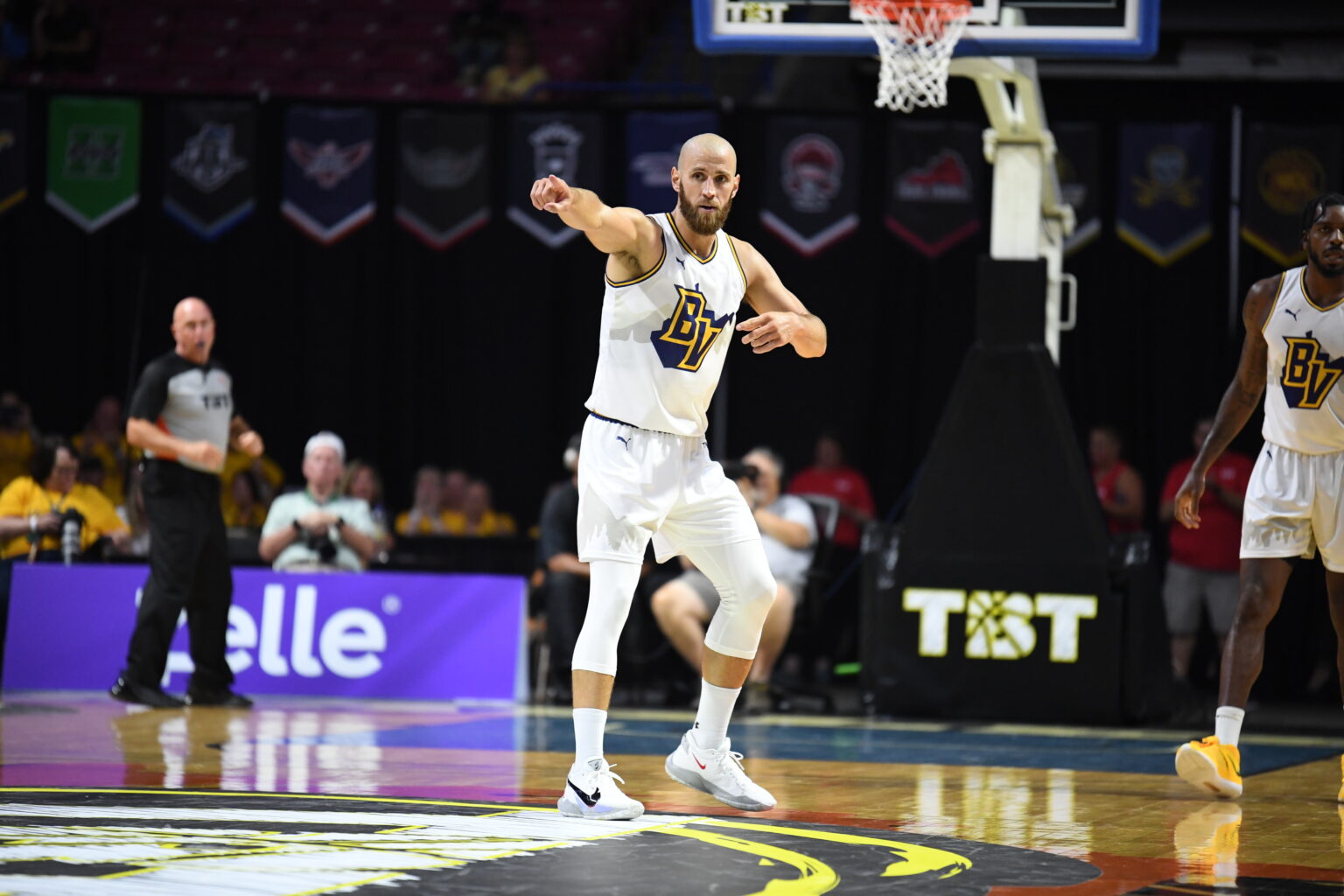 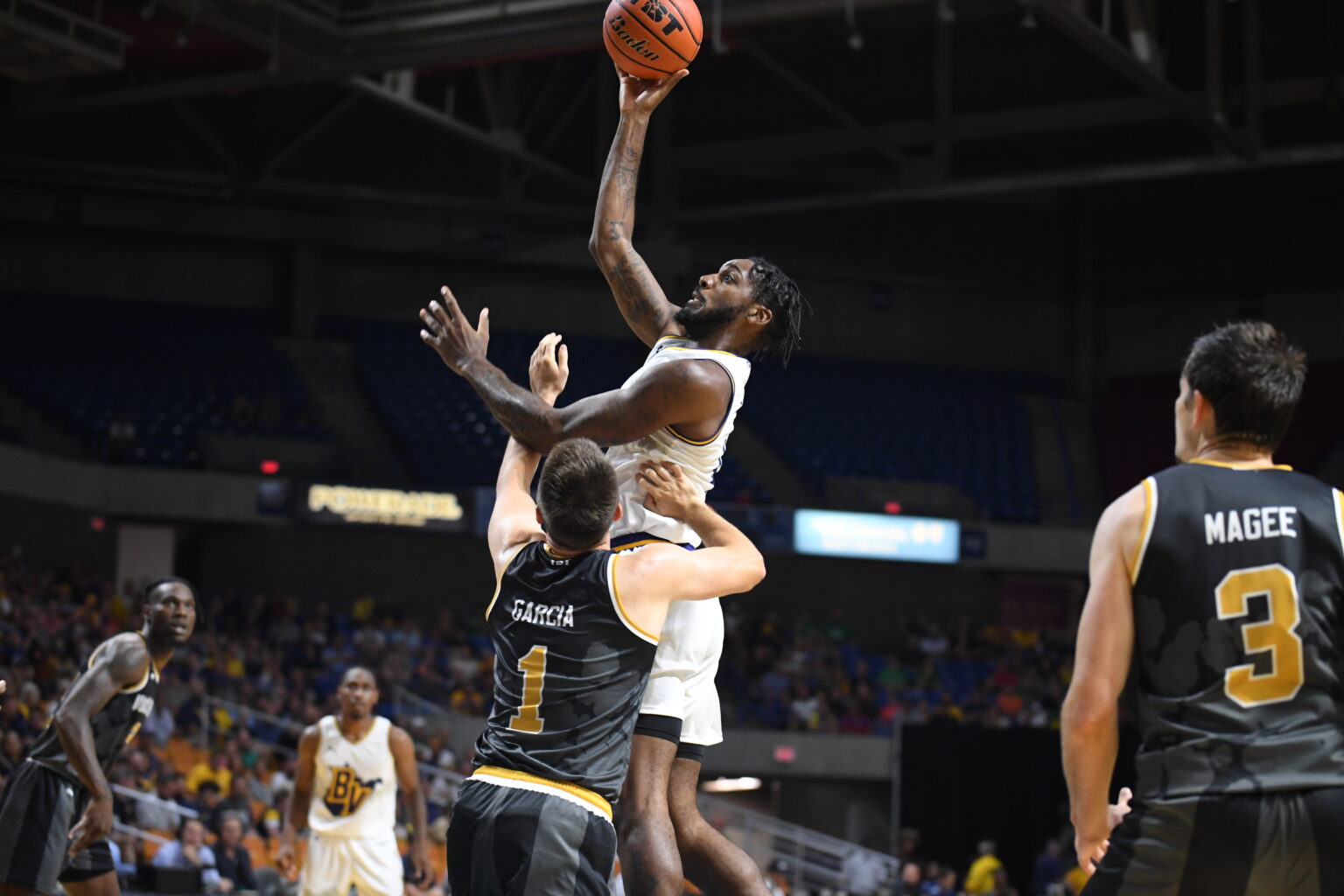 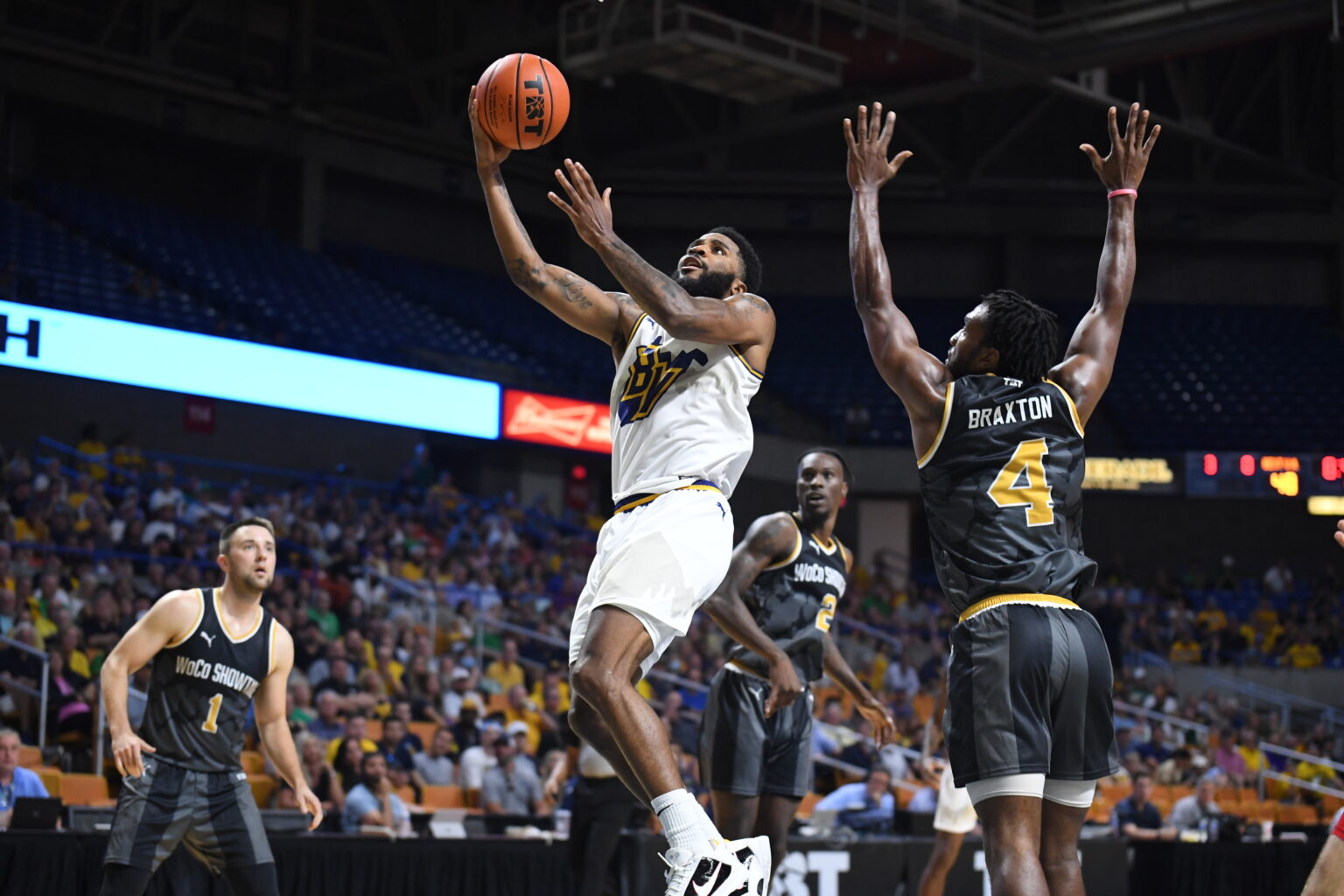 Tarik Phillip drives for a layup. Photo by Mike Lawrence/TBT 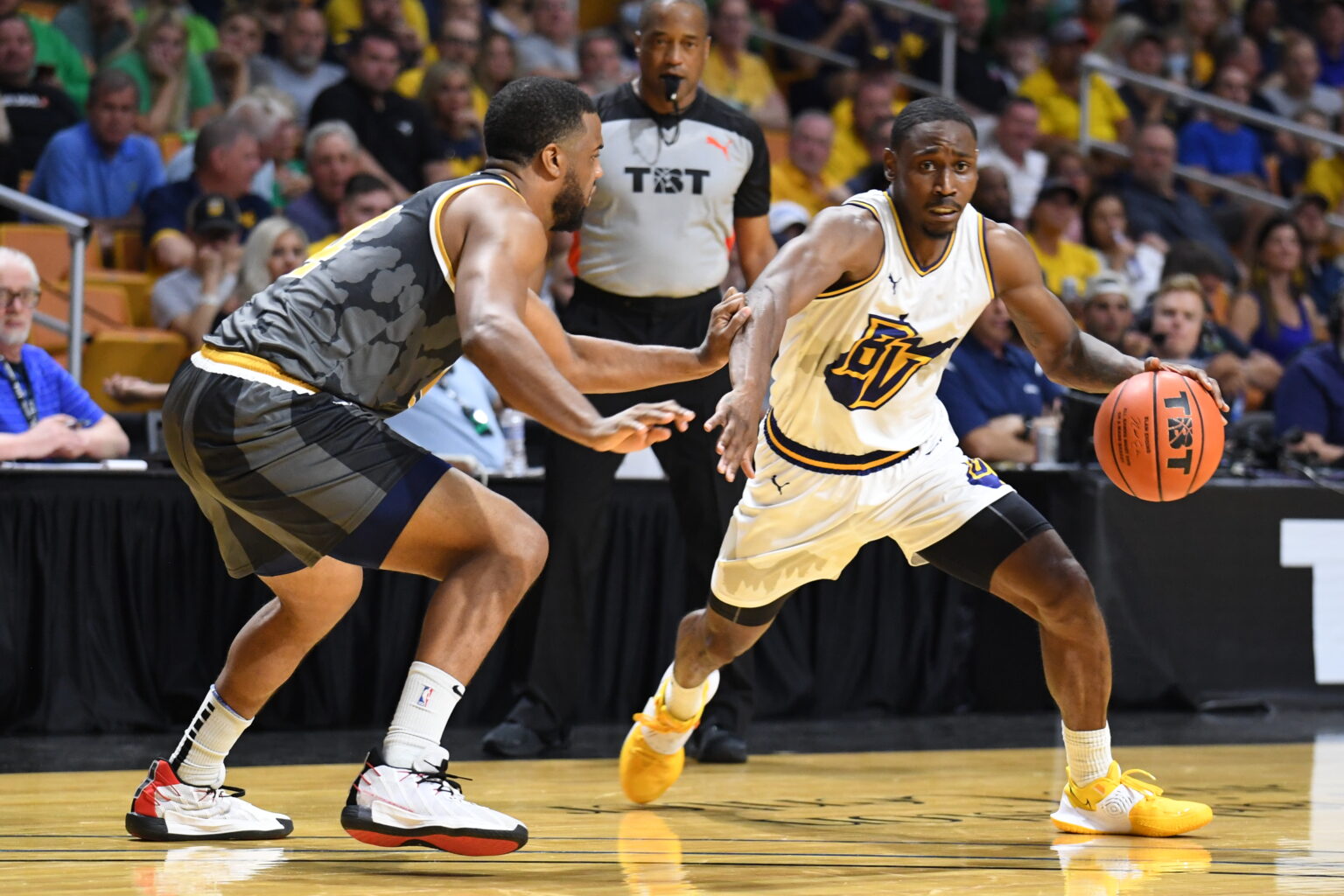 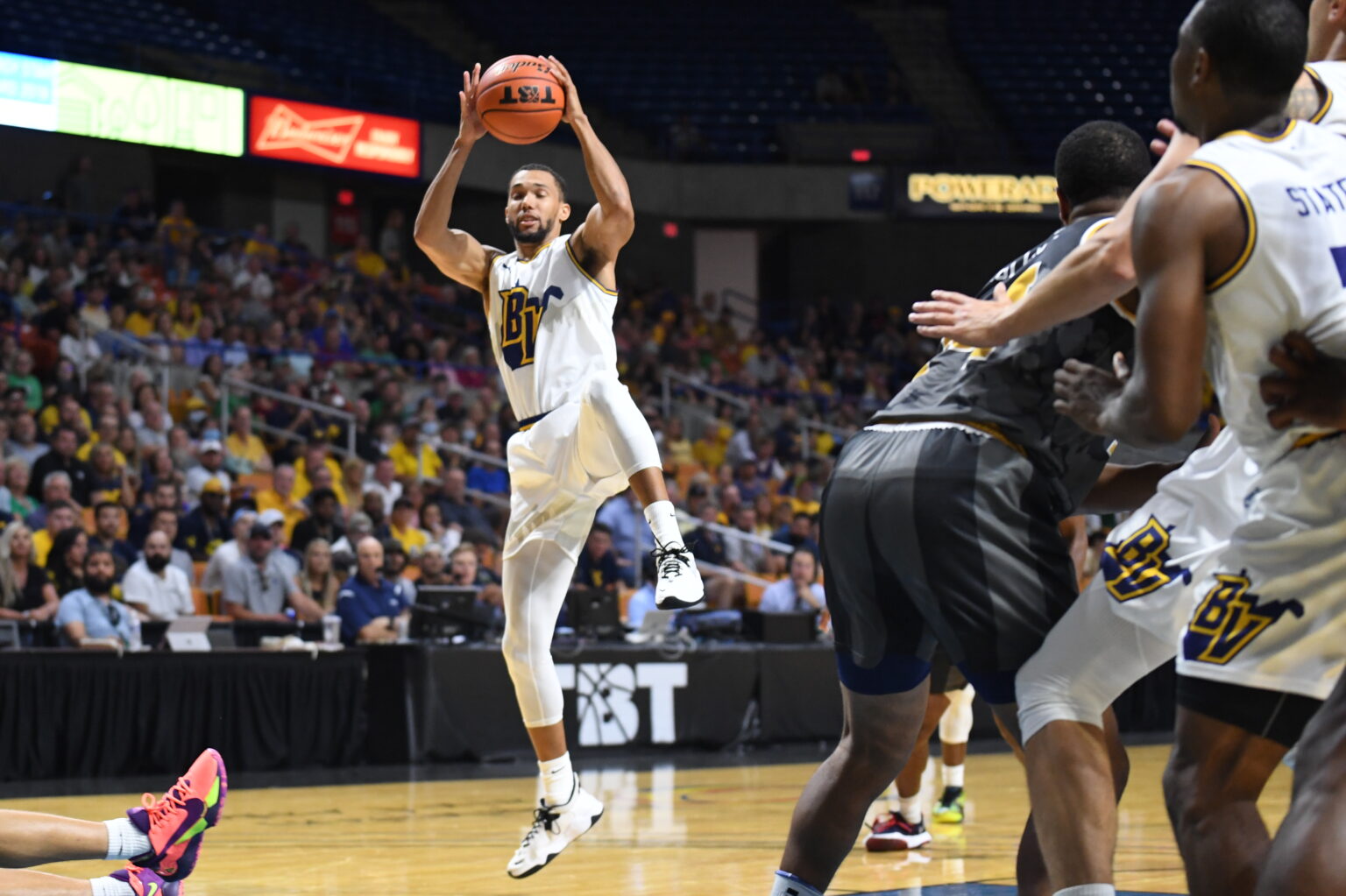 Jamel Morris comes up with the ball. Photo by Mike Lawrence/TBT 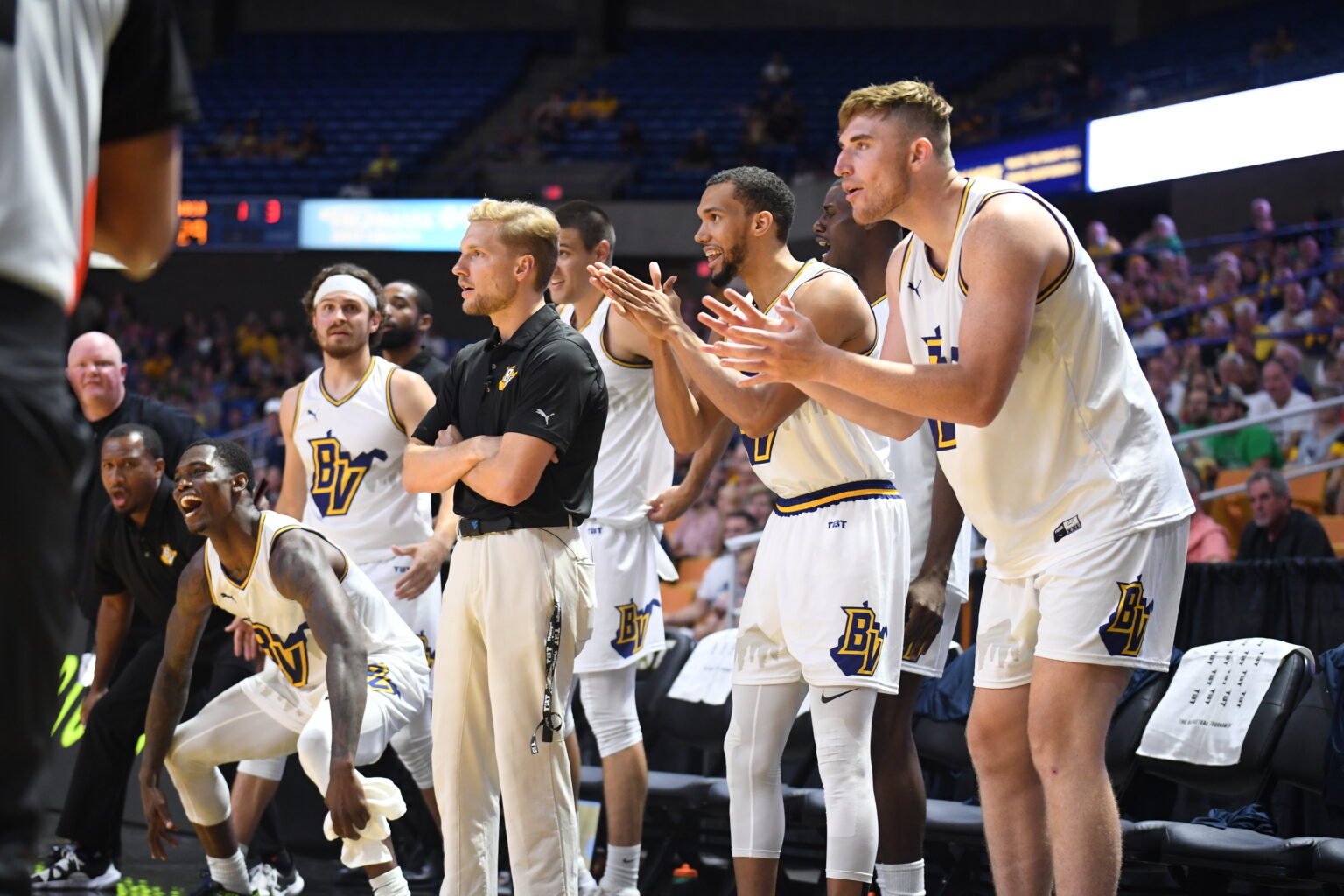 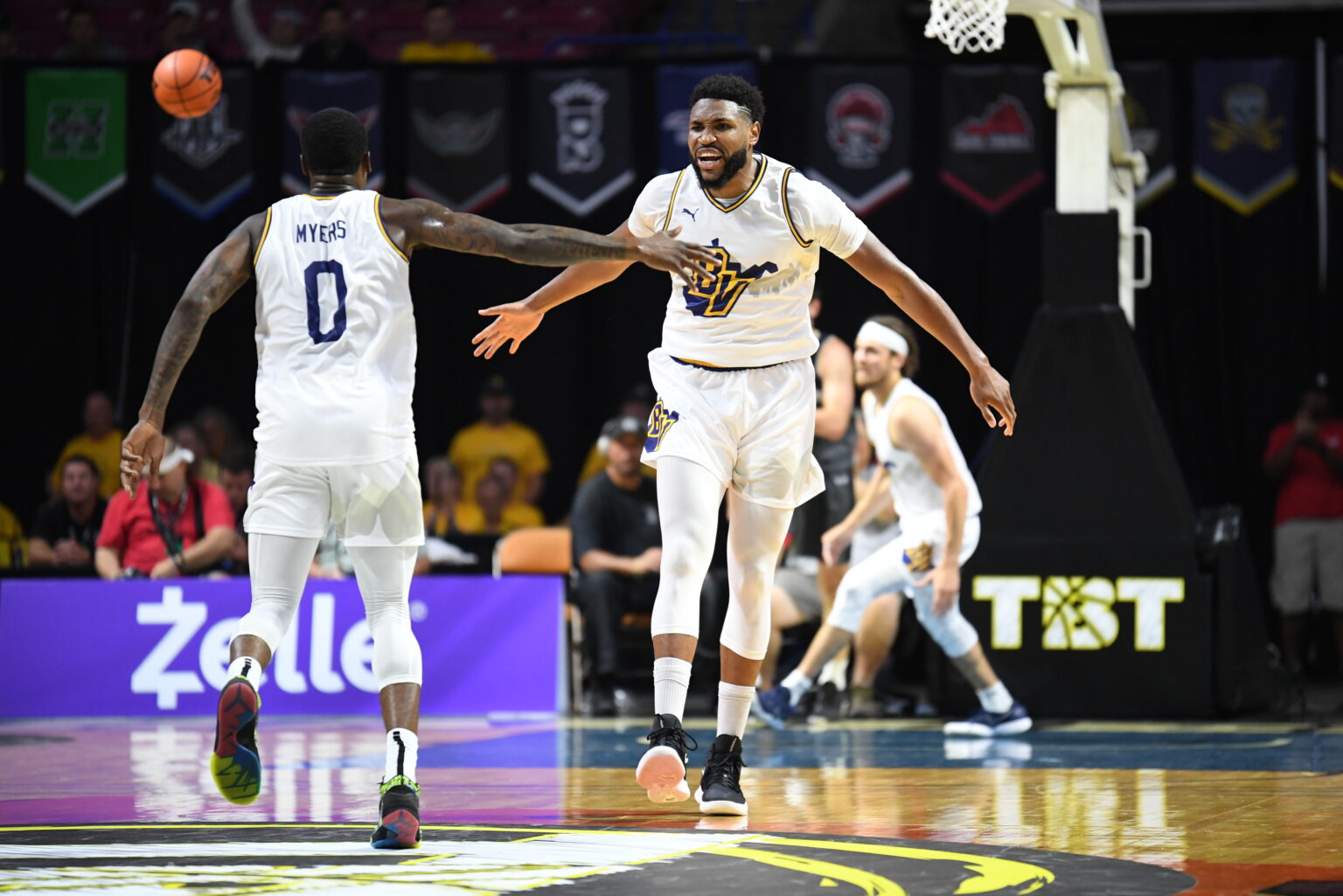 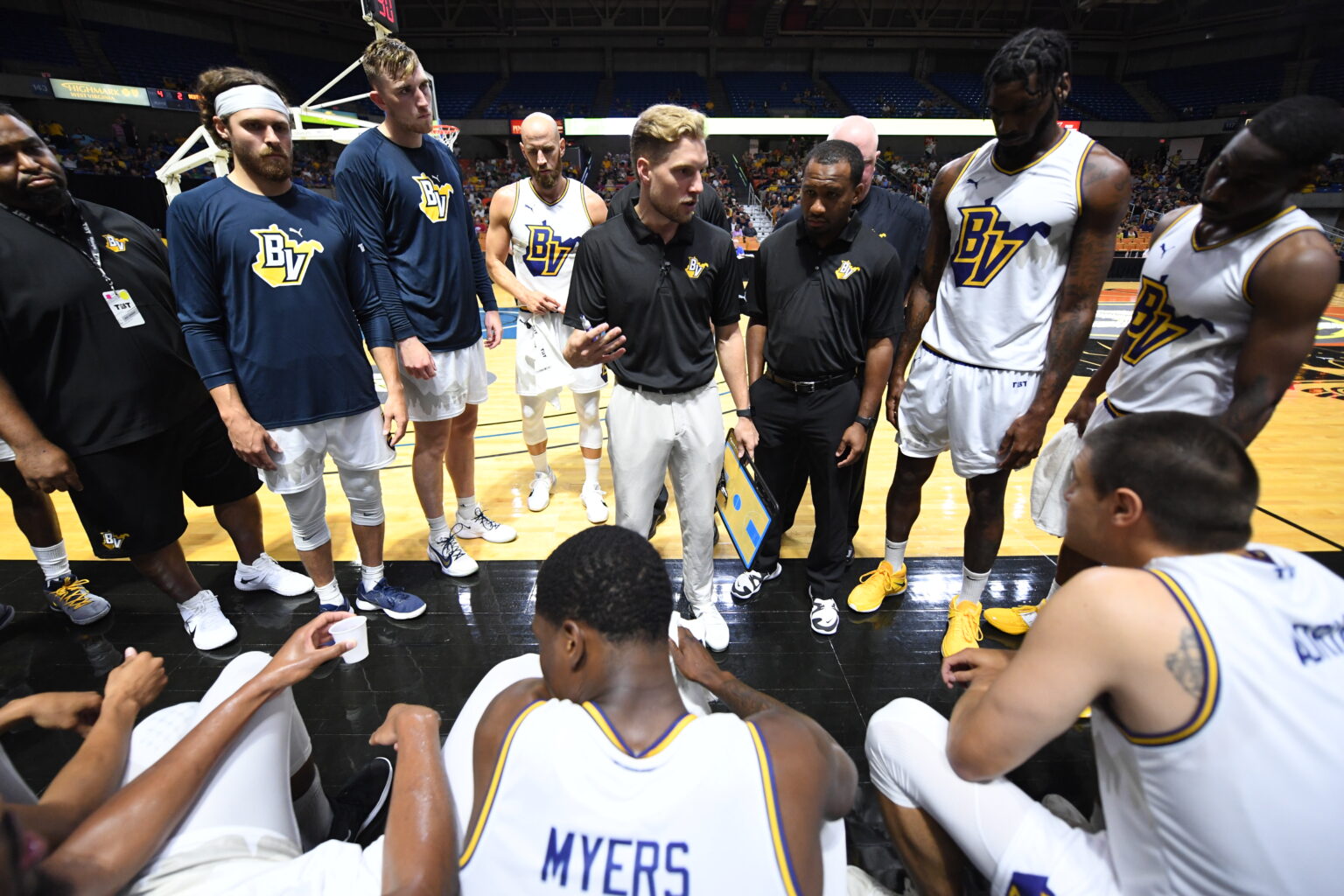 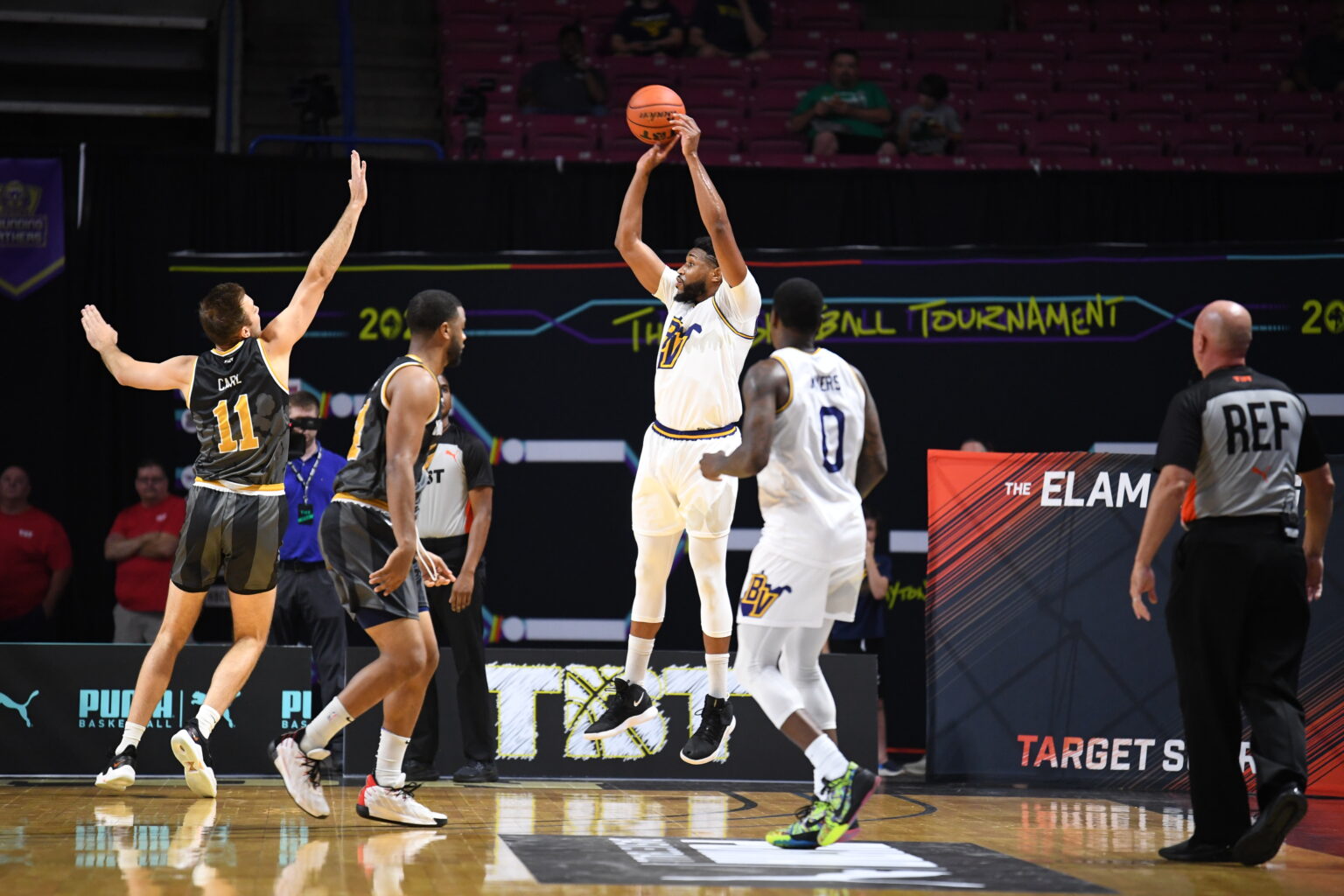 CHARLESTON, W.Va. — What looked to be a relatively comfortable win turned into near disaster for No. 2 seed Best Virginia in Saturday’s TBT opener against No. 15 WoCo Showtime.

Leading 61-52 when the Elam Ending came into effect, West Virginia’s alumni team needed only eight points before a squad largely comprised of Wofford alums could score 17.

But after holding a 68-59 lead, Best Virginia went cold and was one WoCo Showtime basket away from losing. With a chance to win, however, WoCo Showtime turned the ball over, allowing Tarik Phillip to pass to Kevin Jones for a transition layup that sealed Best Virginia’s 70-67 first-round victory at the Charleston Coliseum.

“I was just trying to get an easy shot,” Jones said. “We only had one point to score and we were taking tough shots, except for the one John (Flowers) shot that he was open. I just tried to get something easy and saw an opportunity for a fast break. Coach (James) Long kept telling us to run and get easy points and that’s what we did.”

The victory allows Best Virginia to advance to a second-round affair at 9 p.m. Monday against No. 7 D2, which beat Bleed Virginia later Saturday, 68-56.

A 3-pointer from recent BV addition Jamel Morris upped the team’s lead to 66-57, and when Jones scored moments later, WoCo Showtime was one point away from a loss.

However, Best Virginia went on to miss five straight shots, which combined with a pair of turnovers, nearly led to elimination.

“Every possession counts,” Phillip said. “Both teams increased their intensity because they wanted to win and they’re trying to get to the final score.”

Fletcher Magee, the NCAA’s all-time leader in 3-pointers, connected from beyond the arc to cut his team’s deficit to 68-65. After two Magee free throws, BV’s lead was down to one and the next basket would serve as the game winner.

Juwan Staten tried a pull-up jumper for the win, but it missed the mark and gave WoCo Showtime possession with a chance to win. Lee Skinner’s turnover gave it back to BV, which got a runout that led to Jones’ layup.

“My thought process going into the Elam Ending was if we have the ball we can draw something up,” Long said. “We had a comfortable lead and maybe it’s different with a different score, but we’re learning.”

Best Virginia got off to a slow start and faced a nine-point deficit before scoring the final six points of the opening quarter to trail 15-12.

A John Flowers layup 6:41 before halftime gave BV its first lead at 16-15, but WoCo Showtime used a 12-6 spurt to turn a 22-17 deficit into a one-point lead, with Magee’s triple capping the spurt.

Staten’s layup just before halftime allowed BV to hold a 30-29 lead at the break.

Best Virginia put together its best stretch over the first few minutes of the third quarter, holding WoCo Showtime scoreless until the 5:26 mark of the frame. By the time Keith Braxton ended the WoCo Showtime drought with a bucket, BV held a 41-31 lead.

“Ball pressure is what we do and what we’ve been built on long before we got in the TBT together,” Long said. ‘A game like that, you have to increase possessions. Wofford is great at low possession, methodical games. It makes things difficult. We ramped up the ball pressure to steal some possessions and steal some points. I’s tough to do that all game, but these guys did it in spurts for sure.”

Staten accounted for the first field goal of the second half, before Jones, Flowers and Phillip combined to score the remainder of BV’s 16 points in the third quarter, with Phillip’s seven leading the charge. Still, WoCo Showtime’s 8-4 spurt to end the third quarter allowed it to close to within 48-43 entering the fourth.

Phillip, Jones and Flowers each scored early in the fourth to spark a 6-0 run to start the quarter and Alex Ruoff’s triple at the 5:10 mark of the fourth made it 61-47, before WoCo Showtime began to rally.

“It’s our first game and we won the game. We can get better toward the Elam Ending and James will have us prepared for that,” Phillip said. “Let’s get better for the next day.”

Jones led BV with 18 points and 13 rebounds, while making 9-of-18 shots. Flowers scored 15 points and made 6-of-7 two-pointers, while Phillip gave the team a third double-figure scorer with 11. Morris, a former standout at Fairmont State and the only member of BV to never play at West Virginia, added nine points in the win.

“I like who we have,” Long said, “and we just have to keep getting better.”

Magee scored a team-high 21 points in defeat and needed only eight field-goal attempts to do so. All five of his baskets were 3s.

Keith Braxton scored 16 points off the bench in the loss.

Sagaba Konate is listed on Best Virginia’s roster and played in both the team’s exhibition games last week. However, Konate did not play Saturday in the TBT opener, though no reason was given as to why in the moments after the narrow win.

“No comment,” said Flowers, who was accompanied by Long, Jones, Phillip at the podium.