Kevin Jones converts a layup for the final points of Best Virginia's 70-67 win over WoCo Showtime. Photo by Mike Lawrence/TBT 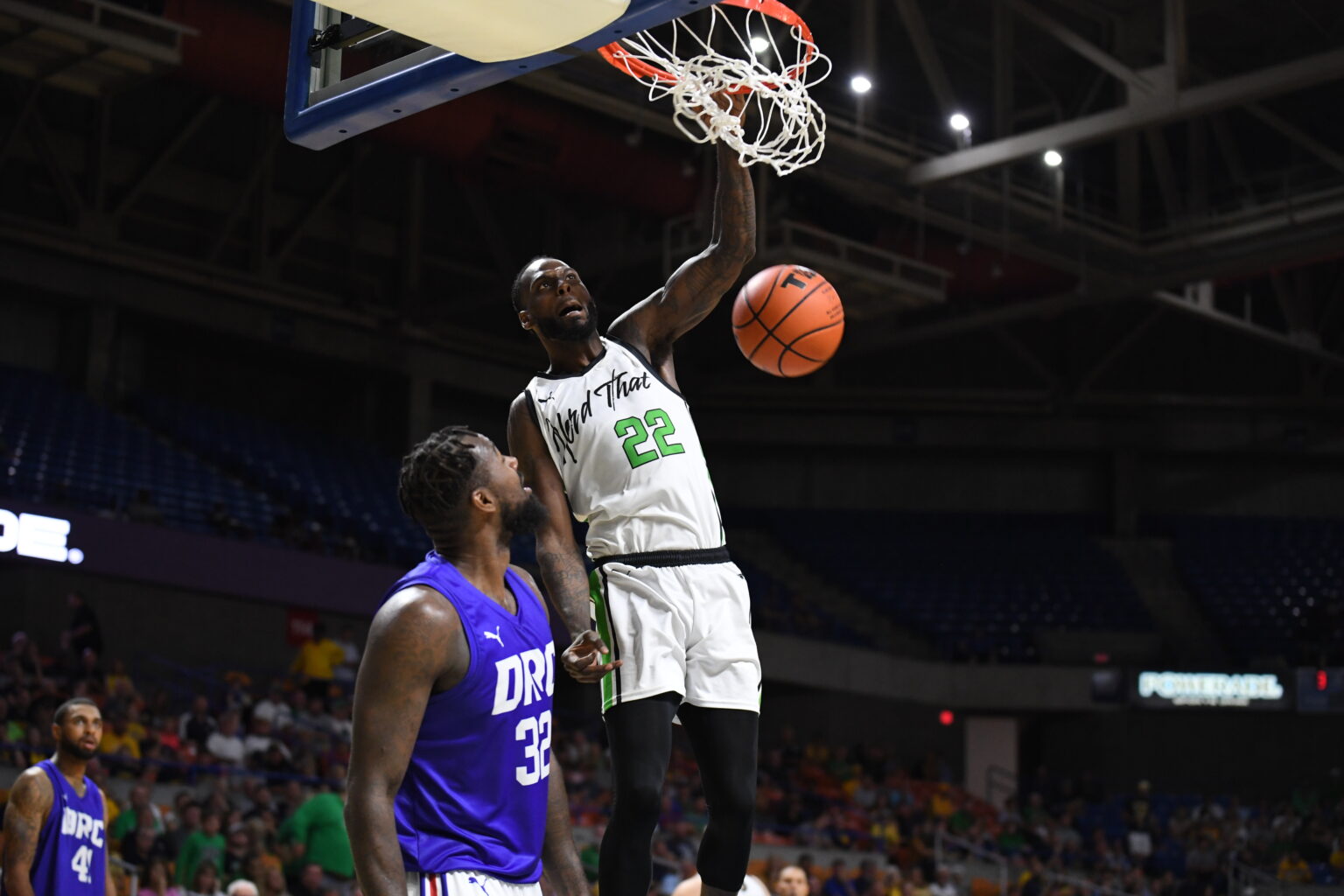 Jacorey Williams dunks for two of his 23 points in Herd That's win over Team DRC. Photo by Mike Lawrence/TBT

(Postgame ‘Round of Sound’ from Best Virginia’s TBT-opening win)

CHARLESTON, W.Va. — Best Virginia and Herd That can set up a round-of-16 Mountain State matchup in The Basketball Tournament with each other when the two teams return to action Monday for second-round contests at the Charleston Coliseum.

Now comes a new set of challenges for each team, with Herd That in action first at 7 p.m. against No. 6 seed Team 23, which posted a convincing 91-64 opening-round win over Georgia Kingz.

“We’ll go back to the drawing board and scout them, but we don’t switch up for anybody,” Herd That guard Jon Elmore said. “We’re going to play our style of play and you’ll have to counter that. We’re a lot deeper in the past. We’ve had good teams in the past, but I’m excited for this next round.”

Postgame ‘Round of Sound’ from Herd That’s TBT-opening win

HT got more than half of its offensive output from Jacorey Williams (23 points) and Elmore (21) in the first-round win. But it was far from a two-man show, with new addition Ronald Delph, a 7-foot reserve, scoring 12 points.

“We added a 7-footer this year, which we didn’t have at Marshall,” Elmore said. “But I’m glad we added him, because he’s an animal.”

Four Herd That players scored six points, including Rondale Watson, who dunked to cap off a 7-0 game-ending run.

Adding size and length to this year’s roster paid off for Herd That, which held a 43-30 rebounding advantage in the opener. Additionally, after leading 77-65 in the fourth quarter, HT saw its advantage cut to four ahead of the start of the Elam Ending.

Team DRC got as close as 78-76 down the stretch, before the all-important 7-0 run to end the contest.

“We don’t have a full season to practice and get the chemistry built, but we have a great group of guys and we’re going to keep getting better as we move forward,” Elmore said.

Herd That shot better than 50 percent in the game (35 of 69) and Elmore made 4-of-6 3-pointers, but the rest of the team combined to miss all nine attempts from beyond the arc.

“We didn’t shoot the 3 great, but the way we play, we’re going to be tough to guard,” Elmore said.

Much like Herd That, Team 23 controlled the boards to the tune of a 43-29 rebounding advantage.

Team 23 has a history of success in the TBT and lost in the 2015 title game the second year of the event.

The nightcap of Monday’s session will pit Best Virginia against No. 7 D2 at 9 p.m. D2 advanced by beating Bleed Virginia 68-56.

After holding a 61-47 lead in the fourth quarter that was cut to nine prior to the start of the Elam Ending, Best Virginia hung on despite nearly being eliminated. Five straight missed shots, combined with a pair of turnovers, allowed WoCo Showtime to pull to within 68-67 — and it was in possession with a chance to advance, needing 69 points to do so.

But Best Virginia came up with a timely steal, allowing Tarik Phillip to start a runout that ended with Kevin Jones converting a game-ending layup.

Best Virginia advanced despite scoring only two points at the free-throw line and making 6-of-21 3s.

Now comes a second-round matchup against a team comprised of former high level Division II players that ended its TBT opener on a 16-6 run to win by double digits.

Shaun Willett and Todd Withers were vital in the victory. Willett finished with 18 points and seven rebounds, while Withers totaled 16 points and nine boards.

Both Herd That and Best Virginia benefited from playing in front of partial home crowds in Charleston on Saturday and both teams should again have that advantage Monday.

“The nostalgia is great,” Flowers said, “and being able to hear that ‘Let’s go Mountaineers’ chant is great.”