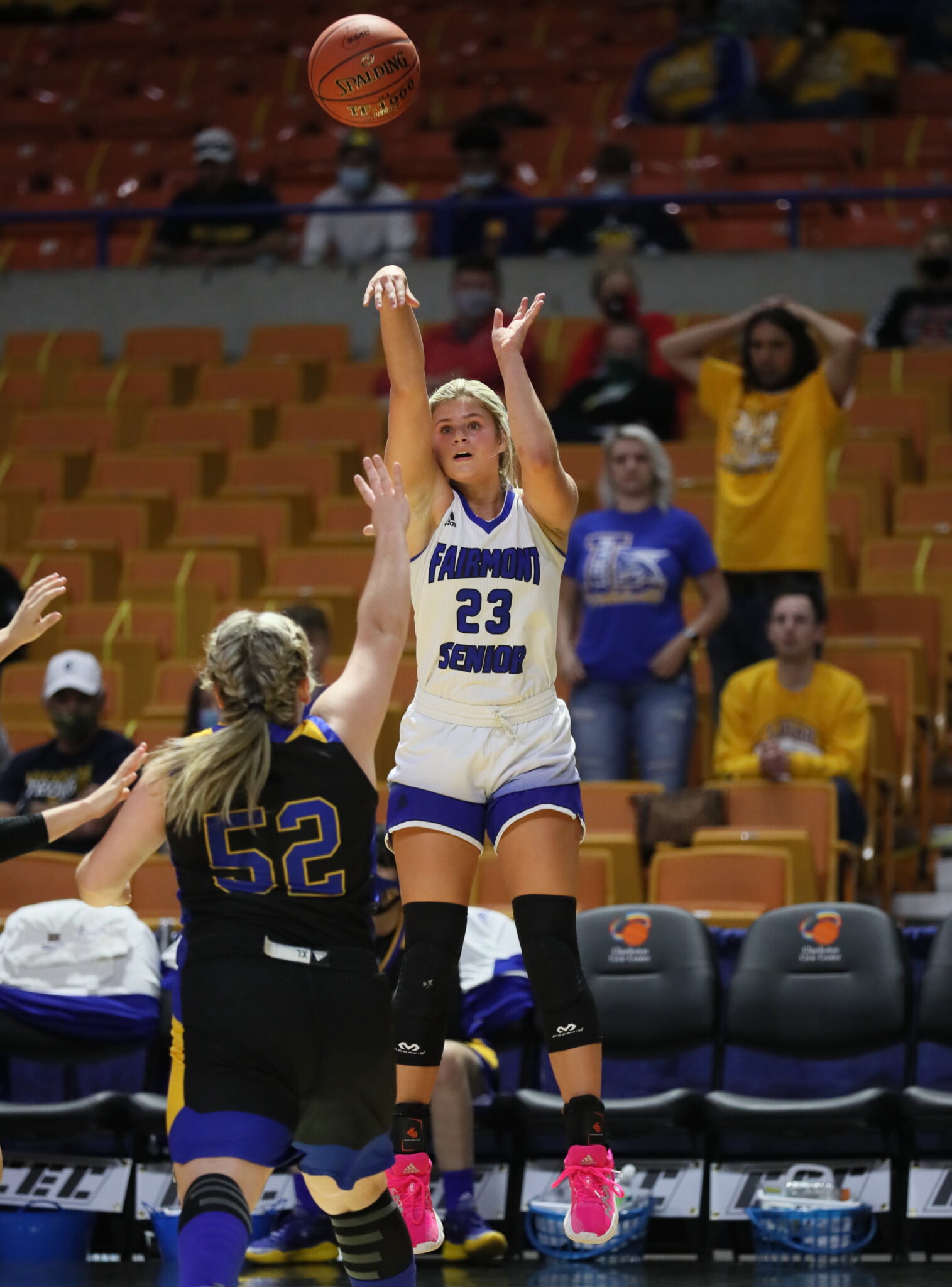 Fairmont Senior's Meredith Maier shoots from beyond the arc. Photo by Eddie Ferrari

Meredith Maier remains unsure when she’ll decide on a college.

Thanks in large part to a strong showing for the West Virginia Thunder this summer on the AAU circuit, she’s not short on options.

Following a junior season at Fairmont Senior in which Maier helped lead the Polar Bears to the Class AAA final with an 18.3 scoring average, she has picked up where she left off while playing across the United States.

Maier’s play allowed her to field offers from a wealth of Division I programs, including Marshall, Stetson, Southern Mississippi, Youngstown State, Western Carolina and most recently BYU. Marshall offered first and other programs followed.

“I didn’t think I was going to get an offer before the first live period, which I was grateful for, but a little bit surprised,” Maier said. “Usually coaches offer in July when they get to come out and watch. I was expecting some offers then, but when Marshall offered, I was like ‘OK, I think I have a chance and I think I’m going to do pretty well in July if I can get an offer based off them just watching videos and film of me online.”

Of those schools, Marshall is the only one Maier has visited, though the 5-foot-11 rising senior will get to others in the near future. She’s also drawn interest from Division II schools and visited Fairmont State and Alderson Broaddus.

In her debut season at Fairmont Senior, Maier was far more than just a scorer. She led the team with 12.9 rebounds per game and added 4.9 assists, 4.7 steals and 1.6 blocks on average.

The Thunder also feature out-of-state players and have competed as far as Indiana and Alabama this summer.

“We’re such a strong team and we have that chemistry and those bonds,” Maier said. “Getting to play with Marley as a teammate, it’s like we have an even stronger connection on the floor, so it helps and plays to our advantage a lot. Knowing Dionna and Peyton so well also helps. We have that mentality being from West Virginia, ‘OK, this is our state, we kind of represent it.’ We go out there with a different mentality sometimes and it really helps us and benefits us going against all these different teams.”

While Maier sets the bar high for herself, as a new addition to the Thunder, the Grafton transfer admits there was an adjustment period to the AAU scene.

“It was a culture shock, just because I haven’t been in that scene for as long as I would have liked,” she said. “I was kind of new to playing at that high of an exposure. I handled myself really well considering that I was new to it. My confidence for playing at such a high level was always there, so it was the right time to come into the circuit.”

Had she been a part of the team for past summers, Maier likely would have drawn Division I interest sooner and have an even lengthier list of offers. But the stat sheet stuffer is grateful for what her experiences playing travel ball have provided.

“I wish I would have done it earlier to have a few more years with the program, because it’s such a strong and awesome program,” Maier said. “They really do help a lot of kids figure out their future and what they want to do. I think I handled myself well and I did my job as far as what needed to be done. I helped my future a lot this summer.”