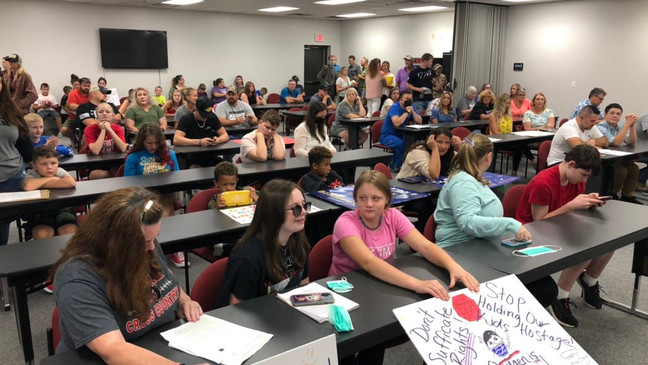 The Putnam County Board of Education voted 5-0 Monday to recommend, but not enforce masks this school year for all students, staff and faculty following an intense debate among a majority of parents who opposed a mandate.

The decision reverses a Thursday announcement that required masks in school for the first 30 days. School officials will now keep masks optional unless further directed by health officials.

During Monday’s board meeting, parents and students packed the room, at times, raising their voices and crying to express their concerns.

“I, for one, will not be sending my children to school with a mask. They will go maskless,” said parent Jeff Smith. “The mask mandate is putting my children at risk. They don’t work.”

Katie Smuck has kids in first and sixth grades. She’s a speech pathologist and told the board masking only enhances speech problems and leads to depression among children.

“Covering the lower half of the face of both teacher and student reduces the ability to communicate effectively, read social ques and non-verbal communication. Positive emotions such as smiling become less recognizable and negative emotions become amplified, causing increased anxiety and depression,” Smuck said.

One parent Josh, who did not provide his last name, supported a mask mandate. He said schools should listen to local health officials, especially now as COVID cases continue to rise.

While addressing the board wearing a face covering, opposing parents became frustrated, telling him to remove his mask.

“Boo! Take the mask off!” someone in the crowd shouted.

“We can’t hear you!” another person exclaimed.

Some students got up and spoke out against masks in school including Kathryn Gross, a 7th grader at Hurricane Middle School.

“I was looking forward to this year without masks or virtual,” Gross said. “My experience with masks made me tired, nauseous, lots of headaches, breakouts, loss of voice, coughing due to lack of oxygen and asthma attacks.”

“One where I can see my friends’ smiling faces and my teachers’ real face. These past two years have been like a nightmare that keeps occurring and I can’t escape,” she said.

There were a few parents who quoted the Constitution in their argument.

“The fact that there is a such a climate of fear is sickening and maddening to me,” said Josh Ruby, a father of four. “No American, based on our First Amendment right of freedom of speech, should have to live in such fear.”