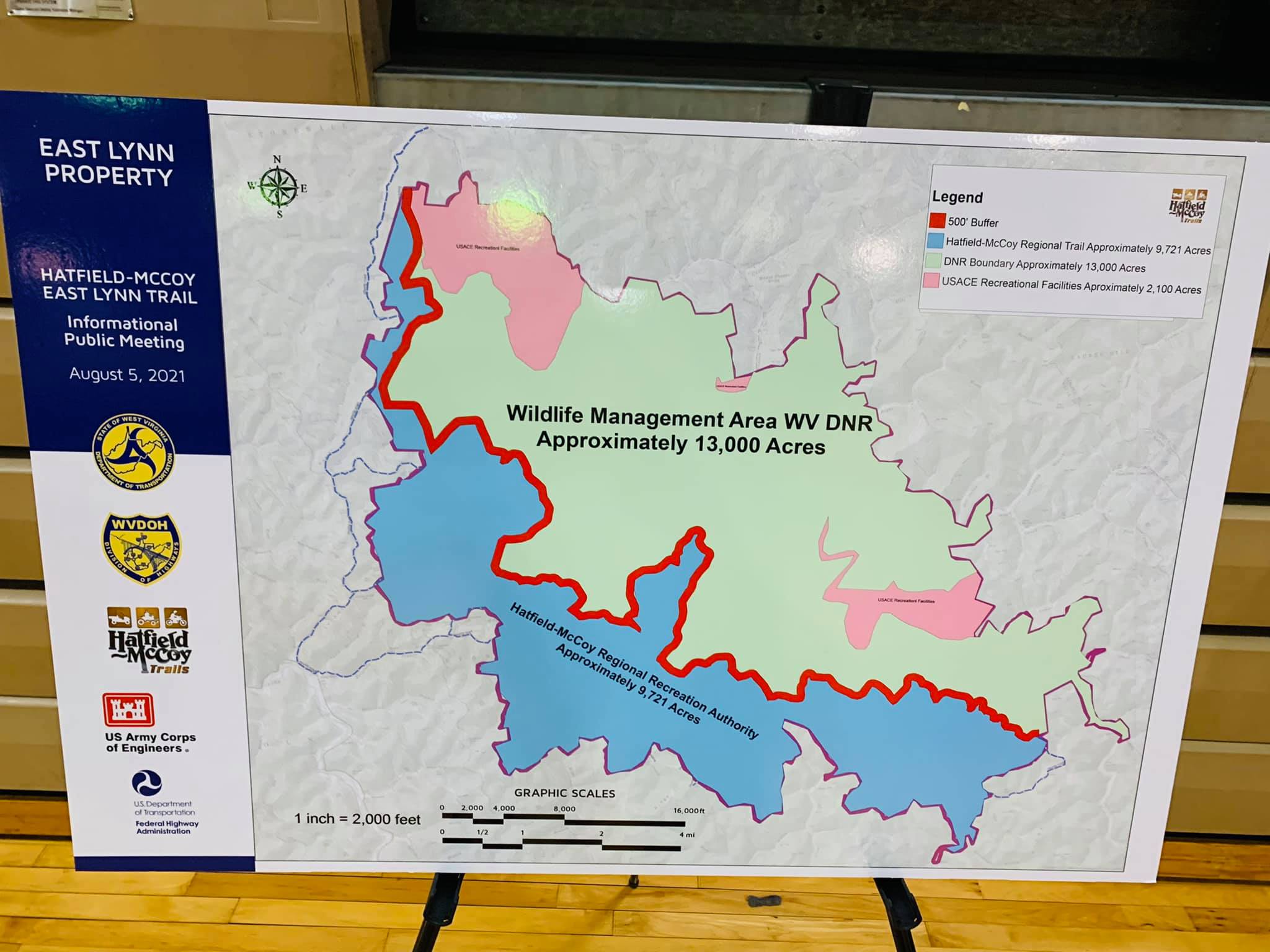 A map showing in blue what part of the East Lynn WMA is proposed to be transferred to the Hatfield-McCoy Trails as part of a new agreement with the U.S. Army Corps of Engineers

HUNTINGTON, W.Va. — A proposed plan being considered by the U.S. Army Corps of Engineers would carve off nearly a third of the state’s second largest Wildlife Management Area in West Virginia.

The Corps is accepting public comments until September 2nd in regard to a proposal which would transfer roughly 9,000 acres of the 23,000 East Lynn Wildlife Management area to the Hatfield-McCoy Trail System.

“What we have proposed to the Corps is to look at inside their 23,000 acre property a way we can preserve the ATV/UTV and off road motorcycle riding in the property, but doing it in a regulated fashion,” said Hatfield-McCoy Executive Director Jeff Lusk.

The shift would require renegotiation of the lease currently in place between the West Virginia Division of Natural Resources and the U.S. Army Corps of Engineers. No motorized off-road riding is allowed on a Wildlife Management Area due to restrictions of the Pittman-Robertson Act.

The DNR isn’t happy with the developments. It removes another 9,000 acres of public hunting land from the WMA system on the heals of the loss of nearly 10,000 acres which was the Morris Creek WMA. But DNR officials say they’ve largely been left out of the discussion and the alternative doesn’t seem to be much better. DNR Director Steve McDaniel confirmed there is illegal trail riding happening on the WMA now and stopping has proved difficult.

“I sent four officers up there last weekend. We had 37 interactions of people riding where they weren’t supposed to be. We gave 16 warnings because we want to use it as education since many are used to riding there. Yes it is a huge problem, but not just at East Lynn, it’s all over West Virginia,” he said.

On any given weekend, the East Lynn property may have close to 200 riders, many of them from out of state, who ride unregulated across all of the public land. The Corps does not allow off road riding as part of its land use plan, but the problem has grown in recent years and they are trying to find a solution. Regulated riding via the Hatfield-McCoy Trails is the current consideration.

“If we manage a system all of our rules in state code will apply. You’ll need to have a permit. You’ll have to wear a helmet. You can’t be in there with alcohol. You’re not going to put your two-year-old in a car seat in the back of your UTV,” said Lusk.

It would be a stark change from what is currently happening. According to Lusk there are currently people riding at night. There is unfettered access to all property. Several open dumps have appeared in recent months.

But the proposed changes aren’t sitting well with those who currently enjoy riding. In fact, they proudly refer to their activity as “outlaw trail riding” on social media. The movement has generated a petition opposed to the trail management plan with more than 12,000 signatures. Nearly 100 showed up at a public information meeting and opposed the managed trail plan.

“It has not been well received. Almost universally those who showed up at our informational meeting were in agreement they like the status quo,” Lusk said.

“A 40-mile trail system is actually going to hurt the businesses who have already started to benefit from this,” Alex Bennett, a rider from Columbus, Ohio told the station.

State Senator Mark Maynard is one of those who has real problems with the plan as well. He’s shared a lot about the plan on social media. However, Maynard said some have gotten the wrong idea about his position.

“I want to set the record straight. I don’t believe I’ve ever said I want the status quo to remain the way it is and nobody touch it. I also speak for my constituents, and they are okay with management of this area. One of the main issues is an outside for-profit company making money off this tax payer land,” Maynard said.

Maynard also had serious reservations about access to cemeteries on the vast property. Several of the graveyards include the final resting place of many of the Senator’s family. He even plans to be buried in one of them and he and relatives often haul lawn mowers and other equipment into the area to maintain the graveyards.

Lusk indicated access to the cemeteries could be worked out through the management plan on a case by case basis.

Maynard had doubts about it and said the proposal called for the condemnation of many of the roads currently used to access those places. He fears perpetual arguments and fights for generations to come over the matter.

“Sure on a case by case basis you can go through a big rigmarole, but right now we have access and I can see down the road a fight for each individual cemetery and I just can’t let that happen,” he said.

Maynard, speaking on last weekend’s West Virginia Outdoors suggested an alternative option patterned after something he said is used in the state of Tennessee.

“Tennessee is doing something with their WMA’s where they have a wildlife viewing license between Memorial Day and Labor Day when there is no hunting,. Then when hunting season opened, require hunters who are accessing these roads during hunting season to actually have a hunting license to be on those roads. It could be a boost to our hunting license sales,” Maynard said.

Maynard’s idea will need plenty of research. McDaniel said it will be a tough sell to federal regulators.

“Any money we use to manage land or, buy land. has to go toward, fishing, hunting or wildlife viewing,” McDaniel said. “Mountain biking and hiking we can get by with as wildlife viewing, but we haven’t found any circumstance where the U.S. Fish and Wildlife Service would qualify motorized off-road riding as a form of wildlife viewing.”