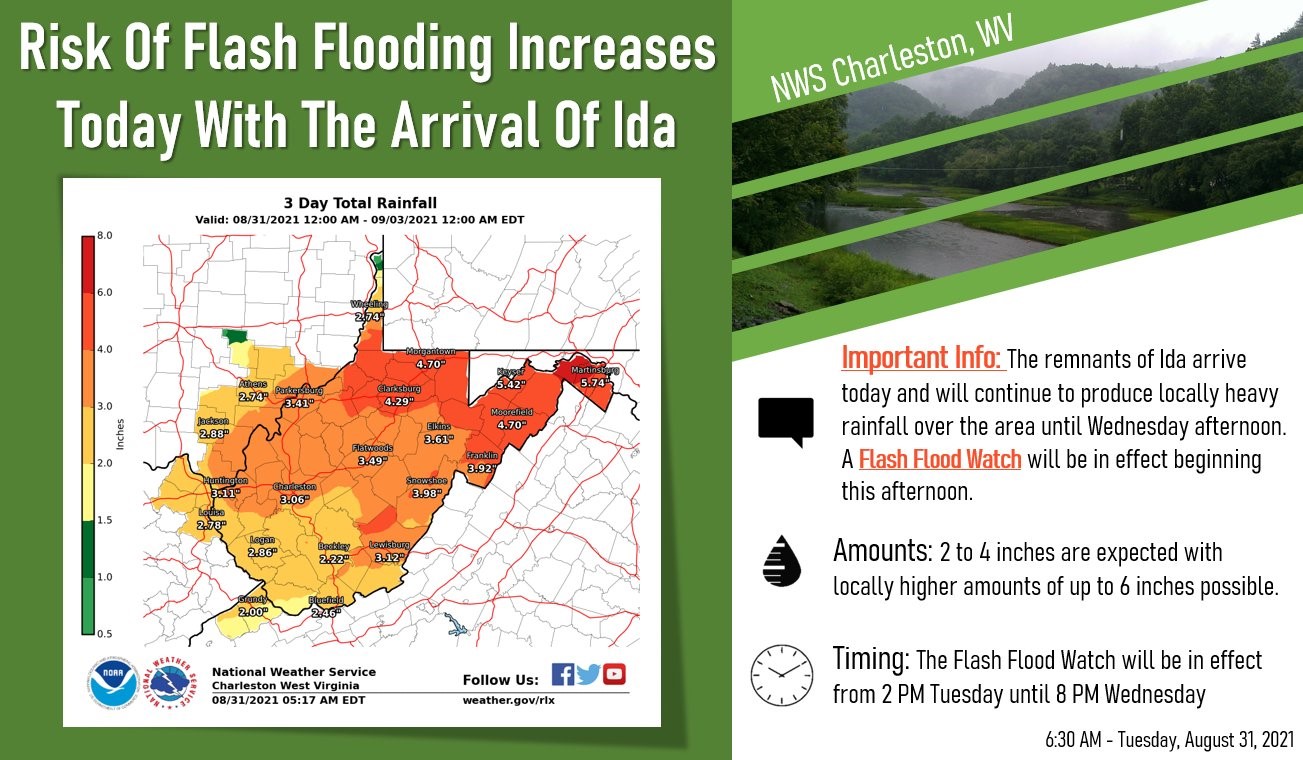 CHARLESTON, W.Va. — The National Weather Service has issued a flash flood watch for all West Virginia counties this afternoon. It’s very likely a lot of those watches will transition into warnings as the leftover rain of what was Hurricane Ida arrives in the Mountain State.

“The rainfall forecast actually increases as it comes into West Virginia on account of its interaction with the jet stream,” said Tom Mazza, Meteorologist with the National Weather Service in Charleston.

[1:00 PM Update] Portions of SE OH, NE KY, and much of NW WV are under a moderate risk for excessive rainfall today and tonight. Significant flash flooding is a possibility tonight through Wednesday. Be vigilant and be prepared to take action if flash flooding occurs in your area pic.twitter.com/sRrm1S3qYB

According to Mazza the rain will be strengthened by the jet stream and in the area where that occurs the rainfall could get as high as four to six inches of precipitation. The line of strongest activity is expected to be across northern West Virginia and into the eastern panhandle counties.

Mazza said flooding is predicted on some of the watersheds of central West Virginia.

“West Fork, Little Kanawha, the Buckhannon, and Coal River at this point are the most likely,” he explained.

But, Mazza stressed just because the rainfall would be heavier to the north, it does not take away from the flood threat in southern West Virginia. There the ground is already saturated after heavy rains Monday afternoon and evening which were not associated with Ida.

“Southern portions of the state are going to get 2 to 4 inches up north it could be 3 and a half to four and a half and it’s a wide spread. It could be half an inch to an inch an hour, but over several hours time. The rain is coming in today, through the night, and much of Wednesday before finally pulling out of here Wednesday night,” he said.

Mazza urged people to stay tuned to local media and keep an eye on updates from the National Weather Service because flooding could strike almost anywhere in West Virginia with the amount of rain headed our way.

“There is potential flooding most anywhere in the state. The highest confidence is in the north, but fairly high confidence throughout the state,” he explained.