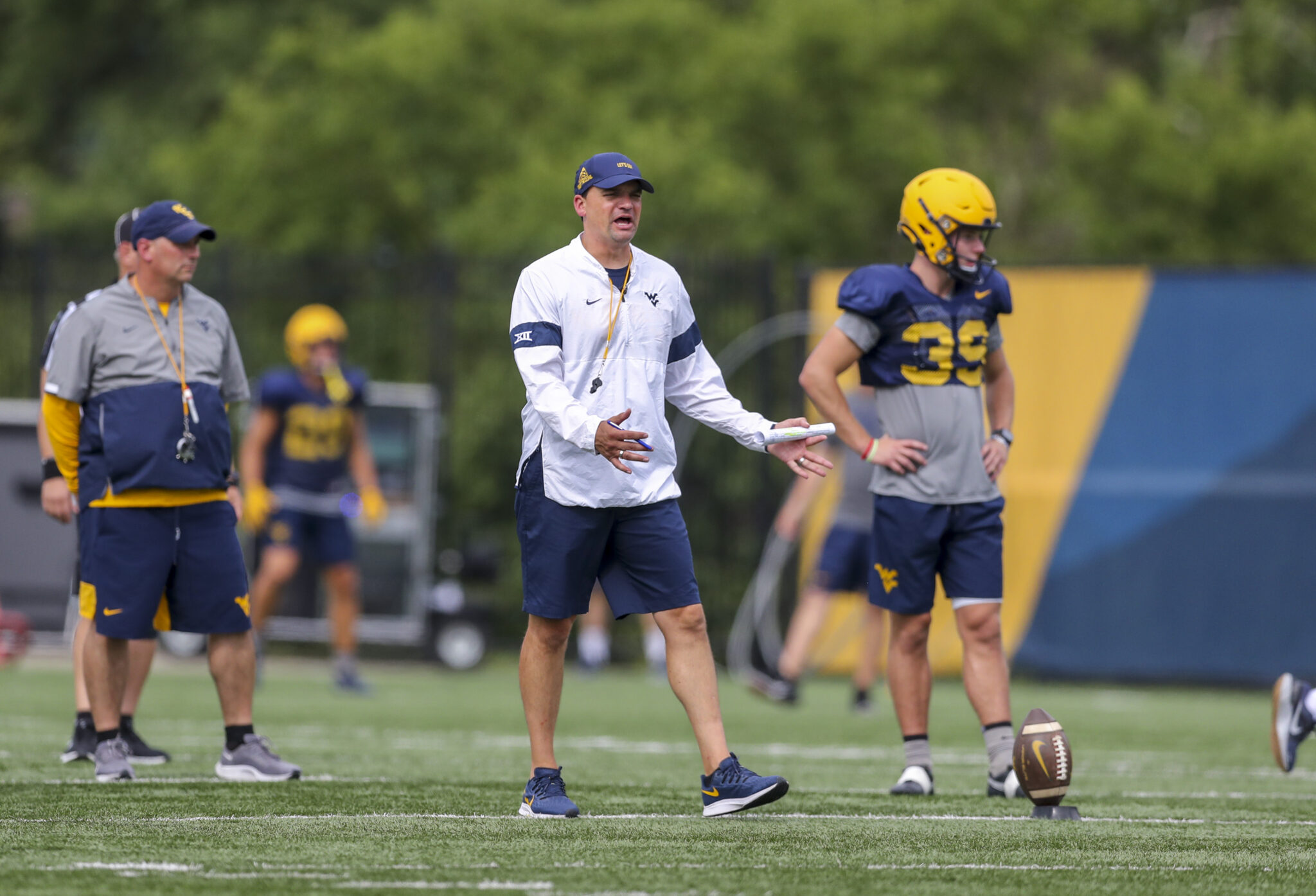 That was the fewest number of games played of any team in the Big Ten Conference, and fewer than all but four Power 5 programs — all of which were members of the Pac-12, which didn’t begin playing until November.

“They have one of the highest return rates percentage wise on offense and defense, but there’s not a whole lot to go on,” West Virginia coach Neal Brown said of the Terrapins.

As the Mountaineers continue preparations for Saturday’s 3:30 p.m. season opener at Capital One Field, they do so with half the amount of film on Maryland compared to 10 WVU games the Terps can look back on from last season.

Perhaps that provides an advantage to Maryland, but it pales in comparison to the remainder of the unknowns surrounding the Terps.

Like Brown at West Virginia, Locksley enters his third season as Maryland’s head coach. Unlike WVU, who has three coordinators returning from 2020, Maryland is breaking in a trio of new ones.

Offensive coordinator Dan Enos came to College Park after spending the 2020 season as Cincinnati’s associate head coach and running backs coach. Enos was at Miami and Alabama the previous two seasons, and he worked closely with Locksley on the Crimson Tide’s staff in 2018.

Defensive coordinator Brian Stewart served as Baylor’s cornerbacks coach in 2020 and was the Detroit Lions’ defensive backs coach for two seasons before that.

Special teams coordinator Ron Zook was promoted to that position in February after being a senior analyst for Locksley his first two seasons in College Park. Zook served as head coach at both Florida and Illinois within the last 20 years.

“Coach Stewart was at Baylor last year and in the NFL before and it’s been since 2017 (at Rice) since he really called it,” Brown said. “You’re kind of guessing for lack of a better term on that. Coach Enos, the last time he called it, he was at Miami. Special teams wise, they have a new coordinator there as well with coach Zook. He’s been on the staff, but not as a coordinator, so we’re trying to using best guesses as to what we’re going to see.”

There are always unknowns surrounding a season opener. Coaching staffs do what they can to have their teams prepared for just about anything.

Part of the problem WVU’s coaches face this week is honing in on exactly what the Mountaineers need to be prepared for.

“You have to have the ability to adjust,” Brown said. “More of your game plan goes into what are you best at? Coming out of fall camp, you rep your whole package. Our defense does multiple things and gives us a bunch of different looks, so it’s not necessarily predicated on what we were good at last year, because the pieces are different.

“We’re guessing at best what they’re going to do defensively. How they played last year and what he’s done in the past when he’s called it, it’s just a guess. We don’t have 100 percent knowledge in what they’re going to do. So we have to focus on our players and schemes that we have the most confidence in and that we’ve had the most success in, and that’s what we’ll use going into the first contest.”

On the flip side, Maryland is preparing for its first non-conference game since 2019 and its first matchup with West Virginia since 2015.

There is more turnover on defense from a unit that defended the pass better than any team in college football last season. Still, linemen Akheem Mesidor and Dante Stills, linebacker Josh Chandler-Semedo and safeties Alonzo Addae and Sean Mahone allow West Virginia to return its fair share of production and experience on that side of the ball.

“As I told our team, what a great barometer for us to start off with a team coming off of a year where they went to a bowl game,” Locksley said.

Brown says he would feel more comfortable ahead of Saturday’s matchup if the Mountaineers had a chance to compete against anybody but themselves in preseason camp.

Unknowns would still exist, particularly going against three new coordinators. But the third-year WVU coach believes he’d have a better feel for what his team could offer.

“College football is lagging behind,” Brown said. “High schools have scrimmages. NFL teams have preseason scrimmages and dual practices. There’s a model out there in college football that we should explore that gives us an opportunity. I don’t know if we need to scrimmage, because our numbers are so low, but I think there’s a way to practice with another team and maybe even somebody at a lower level just to line up and play against somebody other than yourself.

“Any coach that says you know what you have, I don’t know that I believe them, because you’re playing against yourselves the whole time. That’s probably the biggest concern is where are we at. It’s definitely time to play and we need to see where we’re at and where we need to grow, but there’s always concern, because you don’t know.”