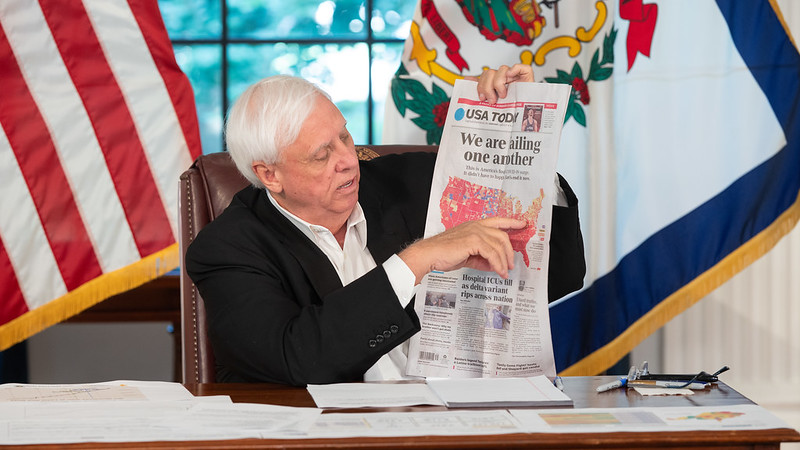 Gov. Jim Justice holds up a copy of USA Today showing the spread of the delta variant.

West Virginians say they have generally approved of Gov. Jim Justice’s handling of the covid-19 pandemic.

That’s according to the latest version of the MetroNews West Virginia Poll, which was conducted August 20 to 25.

Asked about the governor’s approach, 43 percent of respondents said they have been somewhat satisfied and another 28 percent described themselves as very satisfied. Together, that’s 71 percent.

“Overall, he is perceived as managing this pandemic in an effective way,” said Rex Repass, president of Research America, which conducts the West Virginia Poll.

State officials on Wednesday said the pandemic response has gone on now for 537 days. That is marked by the date the National Guard began its response.

Justice, early on, instituted a variety of mitigation strategies including a stay-home order, a statewide mask mandate and, later, a protocols for school that took community spread data into account.

He dropped the mask mandate for all state residents on June 20, aligning with the annual celebration of West Virginia Day.

In recent weeks, as the delta variant has renewed a covid surge, Justice has continually urged vaccination. But the governor has not embraced the resumption of statewide mandates, instead leaving those decisions to local officials.

“As far as mandating today, I think all that would do is get us pulling in different directions from one another,” Justice said Wednesday.

Justice has acknowledged those alarming numbers, but also has indicated he wants to keep nudging people who might be put off by government intervention to open up to vaccination.

“We’re just trying to skate this razorblade,” he said Wednesday.

Doing so could be difficult to sustain, Repass said.

“If you look at what is happening now with the surge, I believe that his managing of the pandemic, particularly early on – the first six, seven months – was very positively reviewed,” Repass said.

“Now, we’re in the middle of the delta variant and I think we’re all trying to understand what’s next with this novel coronavirus, but in looking backward West Virginians have been happy, pleased with the way Governor Justice has managed a very difficult situation.”

The poll shows that West Virginians are worried about how variants like delta are affecting the course of the pandemic.

Forty percent said they are very concerned, and 33 percent described themselves as somewhat concerned.

“All Americans, all West Virginians have been on this roller coaster. At one period of time you think things couldn’t get worse. At another period of time we’re emerging from this,” Repass said.

“West Virginians are concerned about the future and what that means.”

Seventy percent of poll participants described themselves as vaccinated, which may mean they have had at least one shot.

That self-description of poll participants is about in line with the state’s figures, which show that 72 percent of the vaccine-eligible population has had at least one shot. Just 58 percent of eligible residents are considered fully-vaccinated.

As with the state figures, the polling numbers showed that younger residents were less likely to be vaccinated than older residents.

Only 48 percent of poll respondents between ages 18 to 34 said they are vaccinated.

“No question about that. Younger people, it’s much less likely that they’ve been vaccinated,” Repass said.

So that adds up to 70 percent of respondents who describe some degree of effectiveness — the same as the number who describe themselves as vaccinated.

“Still effective, but the jury’s still out,” Repass said. “That’s my interpretation of what that means.”